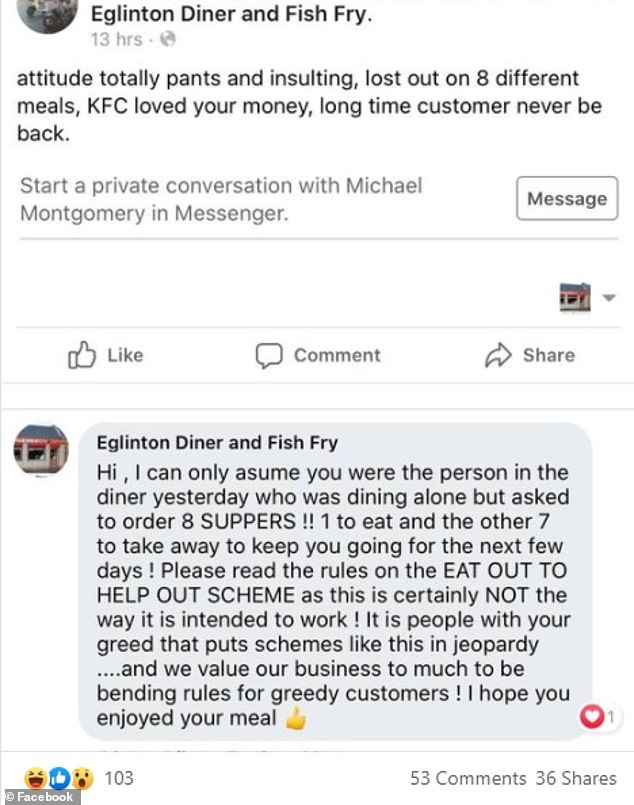 A ‘greedy’ customer has been shamed by a fish and chip shop after he tried to order eight half price meals on the Eat Out To Help Out scheme.

Waiters at Eglinton Diner and Fish Fry in Saltcoats, North Ayrshire, were left in ‘disbelief’ when a lone male walked in and asked for one meal to eat in and seven to take away.

When shocked staff asked him why he had placed the large order, he said he hoped to get enough discounted meals to last ‘for a few days’.

After they explained this wasn’t how the taxpayer-funded scheme worked the man took to social media to vent his rage – prompting a furious rebuke from the business.

Eglinton Diner and Fish Fry in North Ayrshire posted this response to the man on social media after he ordered eight meals on the taxpayer-funded scheme. 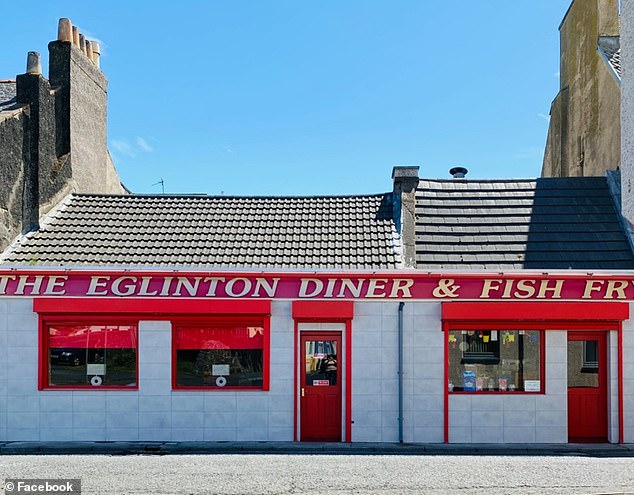 Saying he did not recommend the restaurant, the man wrote: ‘Attitude totally pants and insulting, lost out on eight different meals, KFC loved your money, long time customer never be back.’

The enraged restaurant responded: ‘I can only assume you were the person in the diner yesterday who was dining alone but asked to order eight suppers.

‘One to eat and the other seven to take away to keep you going for the next few days.

‘Please read the rules on the Eat Out to Help Out scheme as this is certainly not the way it is intended to work.

‘It is people with your greed that puts schemes like this in jeopardy and we value our business too much to be bending rules for greedy customers.

‘I hope you enjoyed your meal.’

They then shared his review on their social media page with the caption: ‘I think the attitude of the staff was utter disbelief. Trying to order eight meals for one person so he can get them half price. Unbelievable!’

Customers have voiced their support for the business on social media.

The Treasury has revealed more than 64 million meals have been claimed on the scheme, which discounts meals eaten in restaurants from Monday to Wednesday by up to £10.