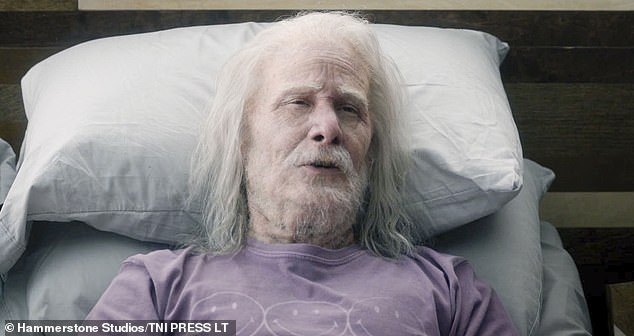 Just over 30 years after their first excellent adventure, Keanu Reeves and Alex Winter return as the title characters in Bill & Ted Face the Music.

And it appears that the John Wick star and actor, both 55, are set to go on quite the journey in the third film of the franchise, as they come across much older versions of themselves while time travelling in stills shared on Monday.

In a preview of the film, Bill S. Preston Esquire (Winter) and Ted Theodore Logan (Reeves) are seen lying in bed with wispy white hair and wrinkled features.

Different look: Keanu Reeves and Alex Winter looked worlds away from their dapper selves as they grapple with old age in stills from Bill & Ted Face The Music that were shared on Monday

The sequel picks up in present day with Bill and Ted now middle-aged dads, the hard-rocking duo were told in the first two movies, upon visiting the future, that they would write the song that would save the world.

Years later, they still haven’t done so, when they are warned by a visitor from the future that they must fulfil their destiny, and they decide to time travel to take the song from their future selves.

In one version of the future, Bill and Ted find themselves living out their twilight years together, with both looking markedly aged up thanks to the power of prosthetic make-up. 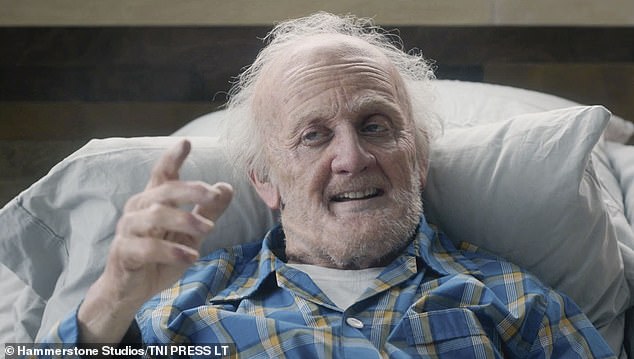 Future selves: In a preview of the film, Bill S. Preston Esquire (Winter) and Ted Theodore Logan (Reeves) are seen lying in bed with wispy white hair and wrinkled features 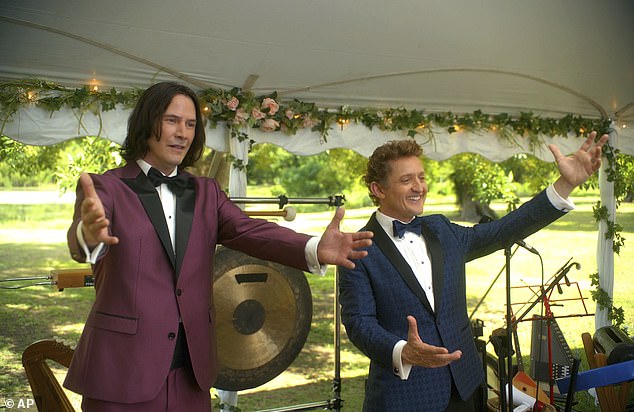 Plot: Bill and Ted are now middle-aged dads, in the first two films they were told they would write the song to save the world, and decide to time travel to take it from their future selves

Last month, Reeves said that the ‘scrappy’ nature of the film is, part of the charm,’ adding, ‘this movie is very much in the spirit of the other two films across the board.’

He added fans will get, ‘Easter egg cameos, and there are other important musical figures that are prominent.’

‘I don’t want to give too much of it away but the spirit of it, all the way down to the soundtrack… it’s a Bill & Ted movie, straight up,’ Reeves said.

William Sadler returns as Death for the sequel, though while Reeves wouldn’t reveal any of the cameos, his co-star Winter added, ‘People will recognize them as who they are from the get-go.’

‘They haven’t turned into different people. But a lot of the comic conceit comes from that idea. If you’ve got two normally unstoppable, persevering characters like this who are faced with a pretty great challenge, and they’re older, and they’re dealing with the realities of life on top of the challenges they’re facing, then what does that do?’ he added.

Dean Parisot (Galaxy Quest) directs from a script by original Bill & Ted writers Ed Solomon and Chris Matheson, with Parisot admitting they didn’t have a big budget to work with.

‘I would say, for production, we probably had the amount of money we’d get to make a television pilot,’ Parisot joked. ‘And we had to make a movie that takes place in Hell, and has the destruction of space and time, and the future prosthetics.’