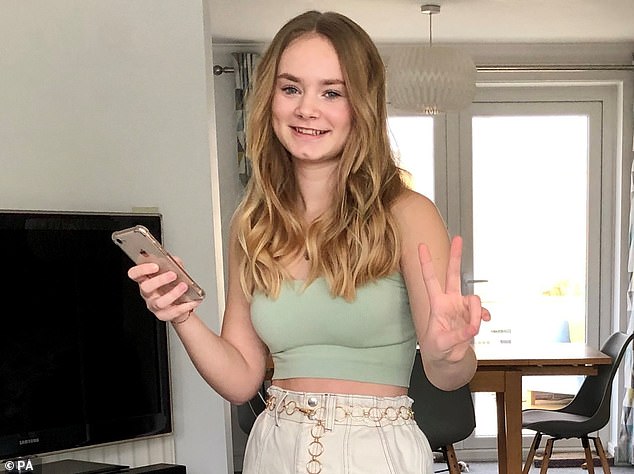 A 15-year-old girl who was killed in front of her family in a speedboat crash could not be revived after suffering a catastrophic chest injury when the high-speed RIB hit a buoy in choppy conditions on the Solent, an inquest heard today.

Emily Lewis was among 12 people enjoying a ‘sightseeing trip’ with Southampton charter firm Seadogz when their boat smashed into the navigation buoy on Saturday, August 22.

She suffered a fatal blow to the abdomen and died in hospital. Two other people were thrown into the water and were taken into hospital along with all the other passengers, but none suffered major injuries.

Emily’s father, Simon, was also on the boat with her mother, Nikki, and 19-year-old older sister, Amy. Both Nikki and Amy suffered broken arms.

Emily Lewis and her family were among 12 people enjoying a ‘sightseeing trip’ with charter firm Seadogz on Saturday, August 22 when their boat smashed into a navigation buoy

Seadogz, which describes itself as ‘The Original Extreme RIB Charter Experience’, has been running the trips for around eight years, Winchester Coroner’s Court heard.

Today an inquest into Emily’s death was opened at Winchester Coroner’s Court.

Coroner Christopher Wilkinson said Emily, from Park Gate in Southampton, was accompanied by her father to hospital, and he confirmed her identity to medics.

He said: ‘The brief circumstances of the death are that she was a passenger on board a boat on a sightseeing trip on Southampton Water when it was involved in a collision.

‘As a result of the collision, she was rendered unconscious and sadly she was unable to be revived.’

The coroner said a post-mortem carried out in the days after her death revealed she suffered a fatal ‘upper abdominal injury’.

He also said: ‘I was informed on August 24 of the death of Emily Lewis. She was admitted to Southampton General Hospital on August 22 and formal identification was done by her father.

‘Sadly, despite emergency treatment being carried out, she died later that day in hospital.

‘At the time of this inquest opening, the details are that she was residing in Park Gate and she was 15.’ 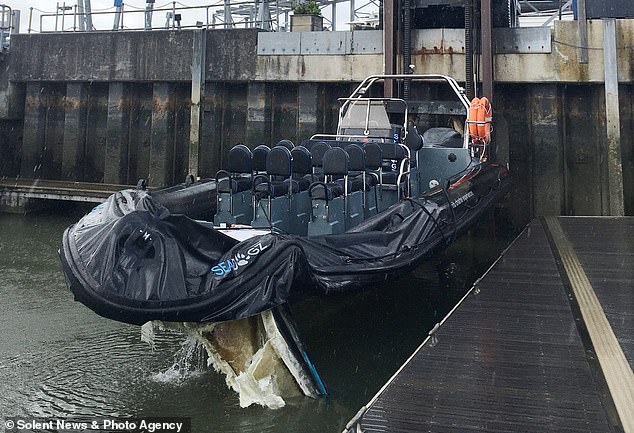 Seadogz, which describes itself as ‘The Original Extreme RIB Charter Experience’, has been running the trips for around eight years (pictured is the damaged boat)

Mr Wilkinson adjourned the inquest until May 5, 2021, when a full inquest will be carried out.

He said he will be requesting hospital records and witness statements from fellow passengers and family members on board the RIB.

Around 24 hours after the tragedy, Mr Lewis posted a heartfelt tribute to his daughter online.

He said: ‘Nikki and I need to share some very tragic news today. Our beautiful daughter Emily passed away yesterday.

‘We were all involved in a boating accident in the Solent and Em suffered serious trauma and died not long after we got to hospital.

‘Nikki and Amy suffered broken arms and are doing as well as expected. I have pain but no breaks but the emotional pain far outweighs the physical.

‘We are all in shock that our beautiful daughter and sister is no longer with us and words just don’t seem to be available to express our deep sense of loss.’

Her headteacher also paid tribute to the schoolgirl, describing her as a ‘bright and conscientious’ student who had lots of potential. 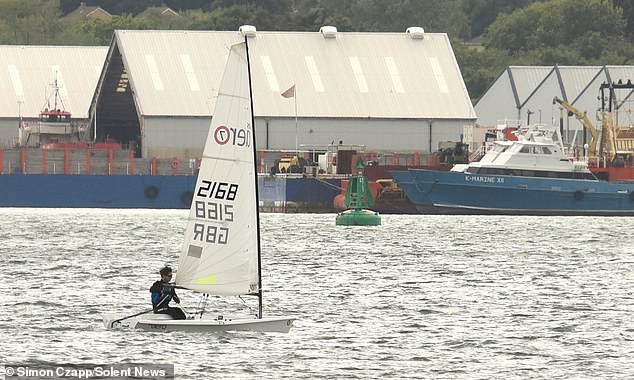 Stuart Parkes, headteacher at Brookfield School – a secondary school in Locks Heath, near Emily’s home – said the 15 year old was a ‘creative soul’ who enjoyed textiles and design.

He said: ‘Emily was a kind and compassionate young lady who cared deeply about those around her.

‘Her caring showed no bounds; from volunteering to support new students through to becoming a student leader with aspirations to help shape the education of every student in our school.

‘She was a creative soul who loved textiles and design and who showed great potential. She was motivated and dedicated to her studies, a positive example to all.

‘Emily was a bright, conscientious student who will be sorely missed by all staff and students at Brookfield.’

The day after her death, a director of Seadogz said he had been advised not to comment on the accident when he answered the door of his modern, £350,000, three bedroom house in New Milton.

Michael Howley, 49, who is listed as the sole company director, said: ‘I can’t talk about this. I have been told not to say anything.’