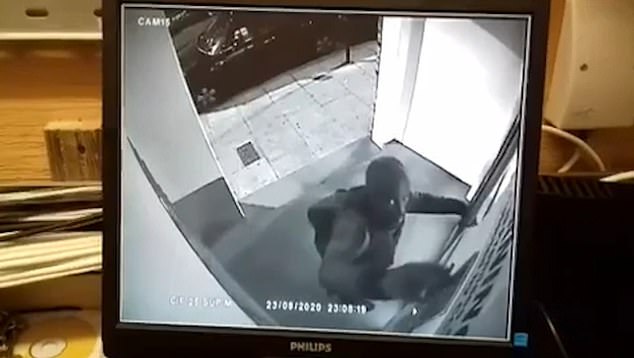 This is the shocking moment a sneak thief uses a simple tool that can be bought online for less than £5 to gain entry into a secure block of flats and steal a £2,000 bike.

Using the special device, the thief was able to bypass the electronically operated front door to the flats and roam around looking for items to steal in communal areas.

The ready availability of the tool has been condemned by the management company responsible for the north London flats where the theft took place and they have called for its unauthorised possession to be a criminal offence.

Victim John Grabowski had his £2,000 Cannondale bike stolen after he left it unlocked outside his flat for a few minutes after returning from a cycling holiday in Scotland. 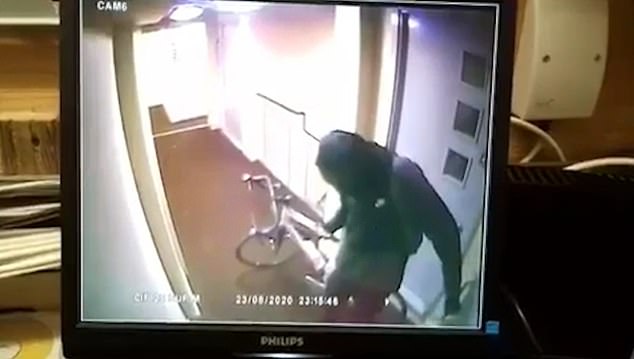 The thief seizes the £2,000 Cannondale bike 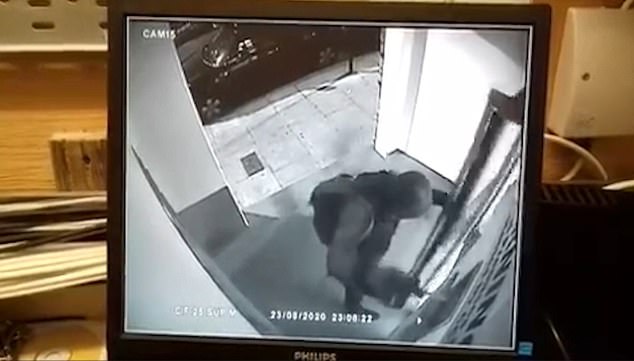 The thief breaks the door open

He was stunned when he later watched CCTV of the theft and saw how easy it was for the thief to gain access inside what he thought was a secure block of flats in Dalston, north London.

The CCTV shows the thief using the tool to slip a lock on the top of the door which usually can only be opened by residents with a key fob placed on an electronic pad.

The tool, which is similar to those used by emergency crews to gain access, can be bought online relatively cheaply.

Online retailers are not required to make any security checks on who buys the tool. While not illegal to own, permission to use is usually granted by management companies. Anyone else using the tool to gain entry is trespassing.

Fire regulations for all new build blocks of flats mean that emergency crews must be able to override security doors to gain access.Similar tools are used to override access to lifts. 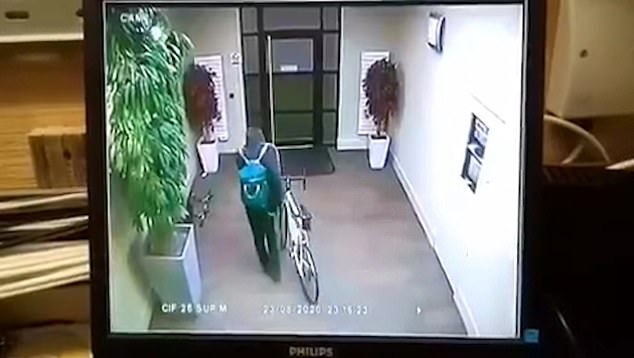 The thief wheels away the expensive bike 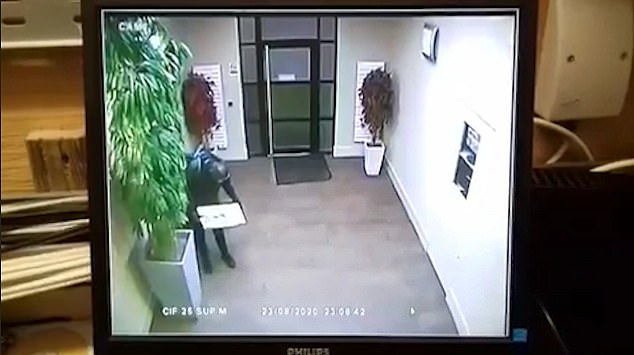 John said: ‘I was stunned when I saw how easy the thief was able to get entry into the flats. He was using the simple tool that completely bypassed the secure front door.

‘If he could do this in my block of flats then many other new builds in London must be at risk.’

CCTV showed the thief casually enter the flats and start to look at packages that had been dropped outside flats.

The intuder makes his way upstairs until he spots the bike left outside Mr Grabowski’s flat and quickly exits, carrying the sport bike downstairs and outside.

Mr Grabowski, an American who has lived in London for 13 years, said he complained to the building management and was told most blocks of flats can be entered by fire crews using a small metal tool that unlocks the front door.

He said: ‘There are lots of new builds around Dalston and so presumably they are not as secure as people think. I understand fire crews must have access, but was pretty shocked when I realised anyone can buy the tool.

‘I know that the tool only gets access to the communal areas , but lots of people have packages that are left outside their flats.

‘We had some jewellery stolen a couple of months ago that was in a package and it never occurred to us that it was someone coming in from the outside.’

John, who works in sports media, said he usually puts his expensive bike inside the flat, but had momentarily left it outside after returning from holiday.

‘I honestly thought it would be safe propped up against the railings and never expected someone to be in the building and just take it.’

The 31-year-old released the CCTV in the hope that someone might recognise the thief and contact police.

‘The bike was not insured so I am massively out of pocket,’ he said.

A spokesman for the management company Aurient Investments said use of the tool should be criminalised and condemned online retailers for selling them. 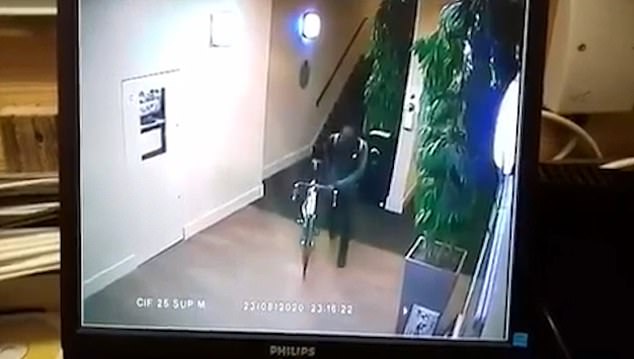 He wheels the bike out of the front door

But they said fire regulations meant that all blocks of flats had to have an ease of access for fire crews in an emergency.

A spokesman for Aurient said: ‘We sympathise with John, it’s miserable to lose precious possessions to theft. It is very difficult to combine safety and security in buildings, and observing Fire Regulations to the letter can’t really be questioned in a post-Grenfell world.

‘A key gives access to the building only, not to any flats. We think online retailers should not be selling security keys and unauthorised possession of one should be criminalised.’

A Met Police spokesman said the bike has not been recovered and no arrests had been made.