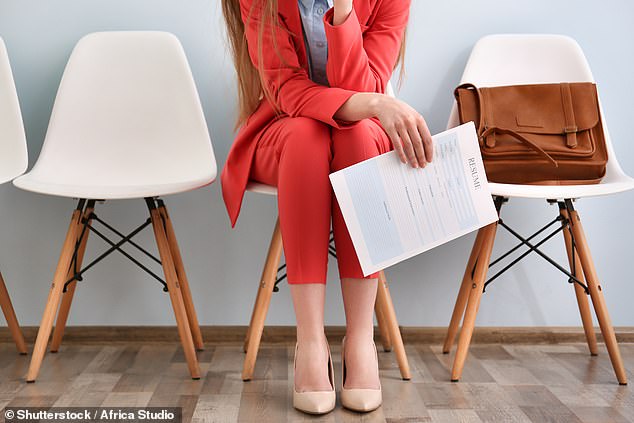 You may have all the right credentials and  have spent hours praticing your answers – but when going for a job interview, the colour you wear could have just as big as an impact when it comes to clinching the role.

Psychologist and Wellbeing Consultant Lee Chambers, based in Preston, claims blue is a ‘popular choice that exudes calm confidence and authority’, while purple is also a good option for those wanting more ‘charisma’.

He added outfits that are brown in colour are best to be avoided or used ‘mindfully’ because ‘it isn’t a forward-thinking shade, and displays a preference for traditional values’.

A survey of 2,786 employees found that 81 per cent were wearing some blue in their attire during a job interview before successfully getting their role.

Meanwhile, only 3 per cent of British workers were triumphant in getting their dream job after sporting a brown article of clothing, according to Resume.io.

Here, FEMAIL reveals the colours more likely to get you a job when included in your wardrobe – and the ones that may destroy your chances of being hired…

Psychologist and Wellbeing Consultant Lee Chambers, based in Preston, claims wearing blue to an interview is a ‘popular choice that exudes calm confidence and authority’, while purple is also a good option for those wanting more ‘charisma’ (stock photo)

REVEALED: THE COLOURS 2,000 BRITISH WORKERS WERE WEARING WHEN THEY WERE HIRED

Resume.io surveyed 2,786 British employees to discover the different colour outfits they were wearing when they were hired.

Here are the results…

Psychologist and Wellbeing Consultant Lee Chambers said: ‘The intriguing reality is that every colour has positive and negative connotations.

‘This can be utilised when you consider the type of role and industry you are looking to succeed in, as well as the personality you want to promote.

‘Blue is a popular choice that exudes calm confidence and authority. It can place employers in a place of serenity but doesn’t convey dynamism and creativity, especially in lighter shades.

Purple is the colour of ‘authenticity, status and non-conformity’, according to the Psychologist and Wellbeing Consultant.

He said: ‘It confers confidence, charisma and a certain boldness that isn’t as welcomed in some professions.

‘It can also be a creative statement and suggest a strong personality, which sends the message that you might not be as flexible fitting into the company culture.’

However, he suggested that it can be embraced positively, saying: ‘Use a muted colour to take the edge off, and it comes into its own.’

Fashion advisors will often suggest their clients pick a sensible option for a job interview, such as the traditional staples of black, navy and grey, Lee said.

And black is not necessarily a bad choice because it’s an ‘intense colour, portraying leadership qualities, elegance and seriousness.’

However, the expert warned not to ‘dress like a shadow’ and go for head-to-toe all black because ‘you will suddenly look untrustworthy and a little menacing’.

Reflecting on the shade of green as a style choice, the psychologist explained that it’s the ‘universal colour of growth and serenity’.

However, he warned that it’s ‘not the easiest colour to implement’.

‘It suggests you’re open to training and learning, and have a calm disposition,’ he claimed. ‘But it also relates to a lack of cutting edge, and a quieter creative tendency that may be left behind in fast-paced positions.

‘Some people still anchor green as the colour of envy, and this can be a consideration for higher-level positions.’

‘Ever the vibrant flame, red is the colour of power and passion,’ said Lee. ‘It tells everyone you are an energetic and social character.

Don’t go monotone or technicolour dream coat: If you go as one block colour, you will appear one dimensional, inflexible and generally lacking complexity, which is vital in some roles. Use colour tones and shades that complement and contrast and find a balance that feels right for you.

Muted shades can win the day: If you want to go as your favourite colour, maybe consider a muted shade or as a secondary colour, as bold and overbearing is often a risky first impression to make.

Research the company colours: We should all do this, but look a little deeper. What are the company’s colours? What do the current employees dress in? What is the culture like? In the world of the internet, we can find out an excellent blueprint to base our interview dressing on.

Be authentically you: Interviews put us in a high stress state and being dressed comfortably and in a colour that feels like you is like a warm hug. Choose colours that reflect who you are, consider the bigger picture, and you cannot go far wrong.

‘The colour can be great for those who are a little quieter by nature, because red clothing with an exuberant personality can be overpowering for some interviewers.

‘It can also signal that you might like some conflict to perform at your best,’ the psychologist warned.

‘The happiest colours we know, and a splash of these instantly singles you out as a joyful person,’ the expert said about yellow and orange.

‘You are fun to be around, often smiling. However, both colours give a feeling of unease over time, and generally are associated with a lack of seriousness and commitment, not a great first impression.

‘Add a splash to show your creativity and save more colour for the work social once you’ve secured the position.’

‘On its own, white is clinical and uninspiring,’ suggested the psychologist and wellbeing consultant.

‘But on the flip side, it shows that you are organised enough not to spill coffee on yourself.  It delivers a message of clean, concise work, but a lack of innovation. A great base to add flashes of another colour.’

Meanwhile, grey is the ‘ultimate colour of safety and logic’, according to Lee. He told Resume.io: ‘Grey transmits a candidate who uses their initiative and analyses situations.

‘It doesn’t convey confidence or courage and needs a pop of colour to show your personality.’

‘Less prevalent, but is a robust and earthy colour,’ Lee said, when reflecting on the shade of brown.

It was the colour that was worn the least amount of times by employees surveyed.

‘It speaks for reliable, grounded individuals, resilient and dependable. It isn’t a forward-thinking colour, and displays a preference for tradition values. It can suck a little energy from the room, so use it mindfully,’ the expert added.