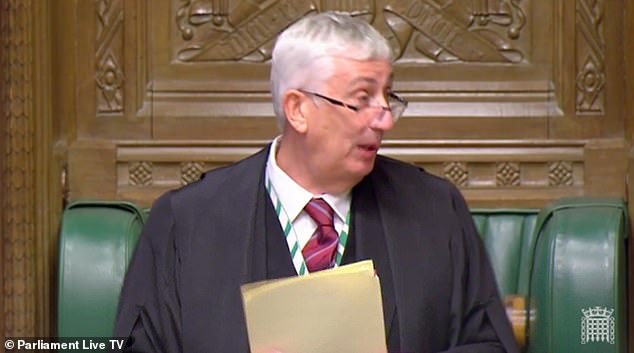 Sir Lindsay Hoyle today urged MPs not to use parliamentary privilege to name a Tory MP arrested on suspicion of rape.

The Commons Speaker said that the MP in question had voluntarily agreed not to attend the House of Commons while he is on bail.

Sir Lindsay said it would be ‘wholly inappropriate’ for any MP to make an attempt to name the suspect while a police investigation is ongoing.

The alleged victim of the Tory MP arrested on suspicion of rape had called for his identity to be made public when Parliament returned today.

A former minister who is in his 50s was arrested earlier this month after the police received allegations of rape and sexual assault in four separate incidents.

A former Commons researcher, who is in her 20s, claimed she required hospital treatment after one alleged assault.

The Conservative Party has refused to suspend the MP whose identity has not been made public and who is currently on bail while police investigate. The MP denies the allegations made against him.

Tory chiefs have insisted the issue should be left to the police, saying that withdrawing the party whip would identify him.

In a statement to the Commons, Sir Lindsay discouraged MPs from using parliamentary privilege to name the senior Tory MP who was arrested.

Sir Lindsay said: ‘The House will know that a member has been arrested in connection with an investigation into an allegation of a very serious criminal offence.

‘I have received assurances from the member and the Government Chief Whip that the member has voluntarily agreed not to attend the House of Commons for the period of the bail.

‘I, the House of Commons Commission and the House service take the safety of our staff and the parliamentary community as a whole very seriously, and ensuring any necessary measures are taken in respect of MPs and employers and staff.’

The Commons Speaker added: ‘While the investigation is ongoing, I believe it would be wholly inappropriate for any further reference to be made to this matter in the House, including any attempt to name the member concerned.

‘I would appreciate your co-operation on this matter.’