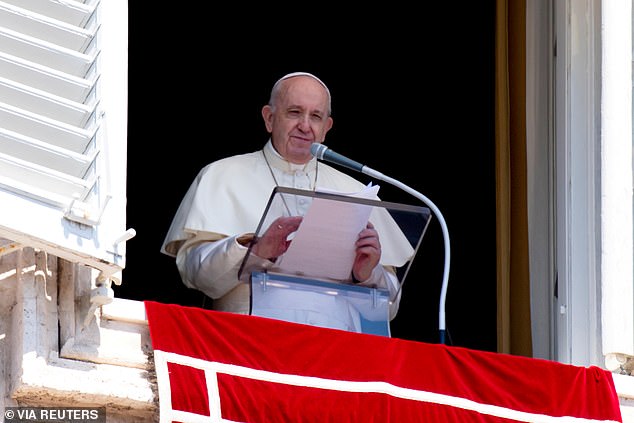 The Covid-19 pandemic has shown how the Earth can recover ‘if we allow it to rest’, Pope Francis said.

In his latest appeal on the environment, Francis urged people to adopt simpler lifestyles to help a planet ‘groaning’ under the constant demand for economic growth.

He also renewed his call for the cancellation of the debts of the most vulnerable countries.

That action would be just, the pope said, since rich countries have exploited poorer nations’ natural resources.

Pope Francis speaks during his weekly address from the window at St Peter’s Square, at the Vatican August 23, 2020. In a written message, Pope Francis has said that the pandemic has shown us the Earth can recover if we ‘allow it to rest’

‘In some ways, the current pandemic has led us to rediscover simpler and sustainable lifestyles,’ Francis said in a written message.

‘Already we can see how the Earth can recover if we allow it to rest: the air becomes cleaner, the waters clearer, and animals have returned to many places from where they had previously disappeared,’ he wrote.

‘The pandemic has brought us to a crossroads.’

The pontiff urged people to seize the opportunity to examine habits of energy usage, consumption, transportation and diet.

Until now, ‘constant demand for growth and an endless cycle of production and consumption are exhausting the natural world’, the pope said, adding: ‘Creation is groaning.’ 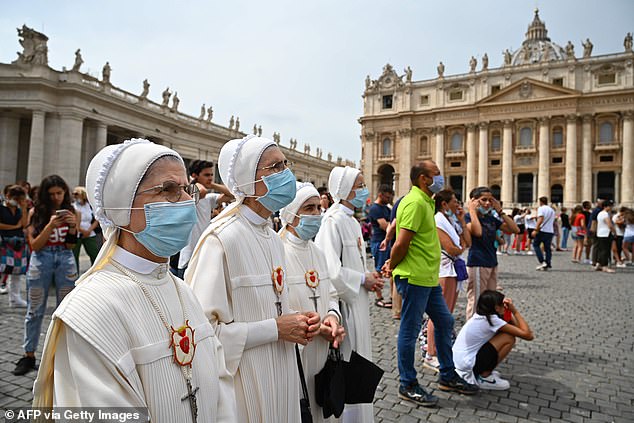 Francis hailed the indigenous communities that ‘live in harmony with the land and its multiple forms of life’.

Citing the medical, social and economic crises triggered by the pandemic, Francis said it was ‘time for restorative justice’.

‘We also need to ensure that the recovery packages being developed and deployed at global, regional and national levels must be regeneration packages,’ Francis said, without naming any particular nations or regions.

Drawing attention to Earth’s fragility is a hallmark of Francis’s papacy.

He poignantly expressed the pressing responsibilities to heal and care for the environment in a 2015 encyclical.