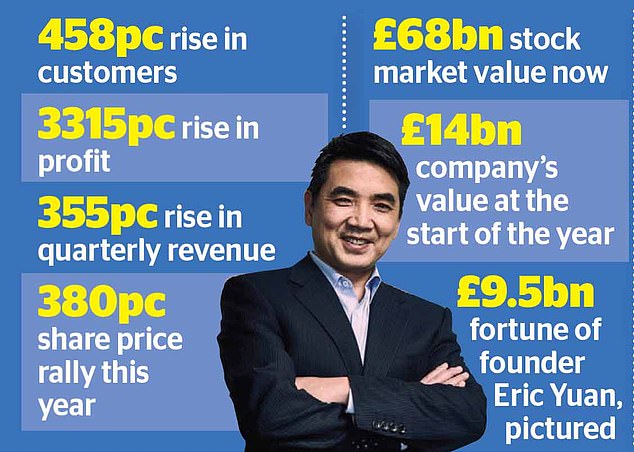 The Zoom BOOM: Company nobody had heard of before Covid is now bigger than HSBC and Lloyds put together

A video conferencing company that few had heard of before lockdown is now worth more than Britain’s two biggest lenders combined following an explosion of people working from home.

Yesterday shares in Zoom soared by 35 per cent after it revealed profits had rocketed by more than 3,000 per cent between May and July.

This added over £20billion to its value, meaning it is now worth around £90billion – more than HSBC and Lloyds Banking Group put together.

Zoom’s billionaire founder Eric Yuan has seen his fortune rise by almost £1billion to £9.5billion, according to Bloomberg data

It also means its billionaire founder Eric Yuan has seen his fortune rise by almost £1billion to £9.5billion, according to Bloomberg data.

The New York-listed firm saw a huge increase in users as countries introduced strict measures to stem the spread of the pandemic.

It became an essential tool used by families and companies around the world to stay in touch during lockdown.

The number of business customers with ten or more employees that signed up to its services over the three month period surged from 66,300 to 370,200 – a rise of 458 per cent. 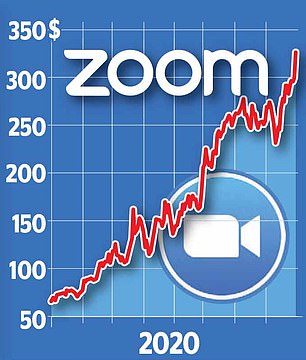 In the UK its popularity boomed as people turned to ‘video hangouts’ to call loved ones, host pub quizzes and run virtual versions of cancelled events.

Its astronomical rise has smashed Wall Street’s expectations, with the the Silicon Valley-based tech firm revealing it raked in as much revenue between May and June as it did in the whole of last year.

Turnover rose 355 per cent to £500million over the three months – compared with £464m for the entire previous year. And profits jumped from £4.1million to £140million.

But analysts have warned that the astonishing rise will not last once workers begin returning to offices. In the UK, some of the biggest companies have announced plans for staff to continue working from home for the rest of this year.

After two quarters of rampant growth during the coronavirus crisis, the company’s share price has risen by almost 550 per cent since the start of the year. Yuan, now 50, spoke little English when he emigrated from China to the US at the age of 27.

He founded Zoom in 2011 after his bosses at telecoms giant Cisco refused to back his idea to create a Zoom-like product. But as well as its popularity soaring, Zoom has also faced criticism over privacy and security practices.

It is facing problems with ‘zoom bombing’, in which pranksters hijack other people’s Zoom events and insult those present with racist language and hate speech. It is also facing scrutiny for its ties with China.