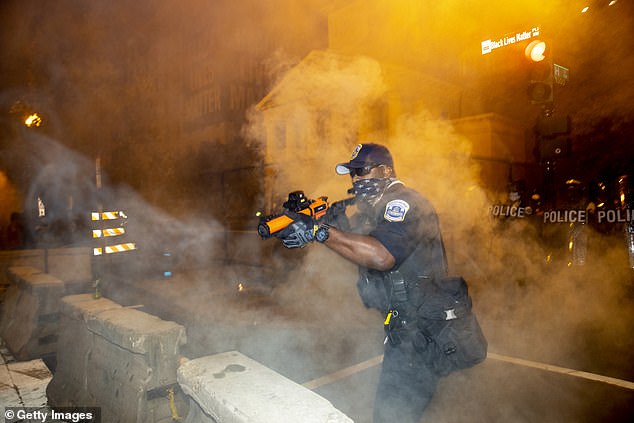 Washington DC Mayor Muriel Bowser has revealed her fear that the US is ‘descending into a race war’ as violence across the country continues and the FBI probes a potential network of domestic terrorists who may be traveling to protest hotspots.

Bowser, a Democrat, was speaking at a press conference on Monday after a weekend of chaos in the nation’s capital which saw demonstrators clash with police outside Black Lives Matter Plaza.

‘What I’m worried about is this country descending into a race war,’ she said, adding that intensified police forces in some cities – like Portland and Seattle – has created more anger among protesters.

DC Police Chief Peter Newsham also said there was evidence that groups of people are driving to various protest hotspot cities, like tourists, to participate or even provoke the violence.

He said that the same van had been spotted at the riots in Kenosha, Portland and DC, and that the FBI was now investigating potential domestic terror groups. It was driven by Jeremy Vajko, 27.

According to an incident report, he plowed the van into a crowd of more than 100 people. Vajko was arrested for reckless driving but charges are not being pursued.

He claims he was only driving at 5mph and that he has been in Portland and Kenosha to give out medical supplies. He was previously arrested in June and July in Portland for disrupting the peace.

Chief Newsham said of him: ‘There was a van that was driving recklessly potentially could have hit pedestrians and officers.

‘That vehicle was a van – it was registered on the West Coast, in Washington State. We have intelligence to suggest that van was also at some of the violence we saw in Portland an Kenosha.’

He said later: ‘This isn’t just Washington, D.C. We’ve seen violence in other cities, and to the extent that that is coordinated, us in law enforcement, we have a responsibility to find out if it is.

‘There’s a potential that it could be domestic terrorism,’ he said.

The FBI has not released any information about the van or any other potential domestic terror groups.

An incident report by Metropolitan Police Department revealed that the driver – who has not been named – plowed the vehicle into crowds of protesters outside the Hay Adams hotel at around 1.15am.

The person was arrested and charged with reckless driving.

Newsham went on to say that the police force’s response in Washington over the weekend was warranted, and that the crowds are who are inciting violence – not law enforcement.

‘Police officers are human beings too. When you throw bricks and rocks and bottles and urine, and you set fires, there is going to a police reaction.

Over the weekend, Donald Trump tweeted warning Mayor Bowser to arrest the rioters or he will send in the National Guard 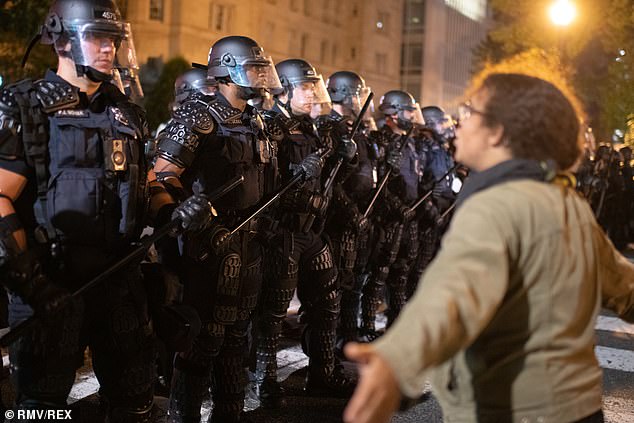 ‘So folks who want to suggest or paint the picture that this was somehow peaceful, and the police indiscriminately used munitions against them, they’re not being honest,’ he said.

Since Thursday night, police in DC have arrested 69 people in relation to the protests.

Newsham said on Monday that ’70 percent’ of them had come from other cities but he did not give specifics.

Trump on Sunday told Bowser to start arresting people or have the National Guard sent in.

‘Mayor Bowser should arrest these agitators and thugs! Clean up D.C. or the Federal Government will do it for you. Enough!!’ he tweeted.

She complained on Monday that even when the police do arrest people, prosecutors do not bring charges.

It came as Trump tweeted that Democrat mayors and governors of cities and states where there is ongoing unrest have ‘lost control’.

‘The Radical Left Mayors & Governors of Cities where this crazy violence is taking place have lost control of their “Movement”.

‘It wasn’t supposed to be like this, but the Anarchists & Agitators got carried away and don’t listen anymore – even forced Slow Joe out of basement!’ he tweeted on Monday.