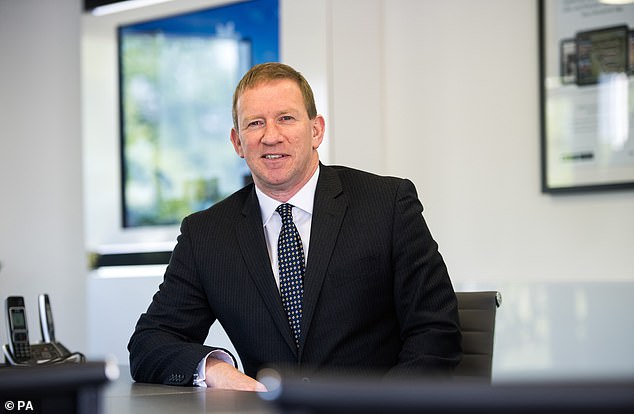 The boss of one of Britain’s biggest housebuilders has insisted the rally in the property market has further to run after reporting a surge in demand for new homes.

David Thomas, chief executive of Barratt Developments, said house sales are bouncing back faster than expected after the lockdown was lifted.

The firm revealed the damage caused by the Covid-19 crisis to its bottom line, with profits slumping by 46 per cent to £492million in the year to the end of June.

David Thomas, chief executive of Barratt Developments, said house sales are bouncing back faster than expected after the lockdown was lifted

It built almost a third fewer homes over this period, after construction sites were temporarily shut down earlier this year to curb the spread of the virus.

It said it would not be paying shareholders a special dividend for the year, amid concerns over rising unemployment and the prospect of a No Deal Brexit.

But it also revealed it is selling homes at a much more rapid rate than it was a year ago, with orders for 15,660 homes, compared with 13,064 at the same point last year. Thomas said: ‘We expect good demand in the long term.

The Government Help to Buy programme is providing a very accessible, very affordable way for people to get on to the housing ladder, and the stamp duty holiday through to March is providing some extra stimulus.’

The upbeat comments came as Nationwide revealed house prices had jumped to a record high in August, after registering the biggest monthly rise in more than 16 years.

It followed a 1.8 per cent increase in July and means house prices have already clawed back their losses during the lockdown.

Property experts attributed the recovery to the release of pent-up demand during the lockdown, a demand for more properties with more space, and the Chancellor’s stamp-duty holiday on homes worth up to £500,000.

But they have also warned house prices could be dragged down again over the autumn as the Government’s furlough scheme ends.