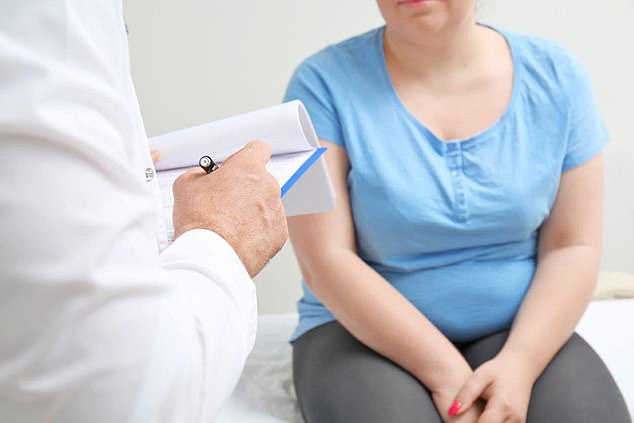 Doctors should not call overweight patients ‘chubby’ or ‘plus-size’ because it upsets them and people should choose how medics refer to their weight, scientists say

By Eleanor Hayward Health Reporter For The Daily Mail

Obese patients should be able to pick what language doctors use to refer to their excess weight, experts have said.

Many people find words such as ‘fat’ ‘chubby’ or ‘plus-size’ upsetting or offensive, a British study found.

Researchers suggested that GPs and other healthcare workers should make a ‘conscious effort’ to ask patients prior to appointments what terms they prefer.

Many patients favour more neutral language such as ‘overweight’ or ‘body mass index’ as they find it less distressing.

Obese patients should be able to pick what language doctors use to refer to their excess weight so not to upset them, experts have said (file)

A study by the University of Leeds and University College London examined the importance of language used by doctors, nurses and midwives when addressing overweight patients.

Nearly 3,000 adults, most of whom were overweight or obese, were asked what they prefer and questioned over their emotional response to different words.

People who eat most of their calories after 6pm tend to have unhealthier diets and eat more overall, according to a study.

Researchers said that late eaters were more likely to gain weight because they tend to let themselves get extremely hungry during the day.

This makes them more prone to binge eating, making bad food choices and eating junk food in the evening.

Whereas those who consume their biggest meals earlier in the day are often too full to stuff their faces at night.

For the latest study, researchers from Ulster University in Northern Ireland looked at more than 1,100 adults as part of the UK National Diet and Nutrition Survey.

The nationwide survey began in 2008 and collects detailed information on the food consumption, nutrient intake and nutritional status.

The volunteers – aged 19 to 64 – were quizzed about their meal timings and food choices.

The researchers found those who ate 30 per cent or less of their food at night consumed less total calories overall than any group.

Whereas those who ate half of their calories at night were more likely to gain weight and consume food with little nutrition.

Words including ‘chubby’, ‘super obese’ and ‘fat’ were found to provoke the highest feelings of sadness, disgust, contempt and anger.

These emotions can in turn undermine attempts to get patients to engage with weight loss programmes and deter them from seeking medical support, experts said.

Most people said they would rather doctors used terms such as ‘weight’, ‘unhealthy weight’, and ‘body mass index’.

But the authors said that, if possible, healthcare professionals should ask patients for their ‘preferred weight-related terminology’ before consultations.

Lead author Dr Stuart William Flint, from the University of Leeds, said the guidance is applicable across all NHS settings, including GP surgeries and hospitals.

He said: ‘The general message for healthcare professionals is to be more cautious about the terms they are using because it can have a detrimental impact.

‘Patients should be asked what term they prefer to be used in the consultations where it is necessary to discuss weight.

‘If you’re going to speak about weight management or weight, start by eliciting what the patients’ preferred terms are.

‘There is no one-size-fits-all approach to which language to use. Some people may prefer “overweight” or “obesity”.

‘Some people dislike the term fat because it is often associated with bullying in schools, leading to feelings of anger and disgust.

‘It is important to ensure people are comfortable and at-ease will want to continue to engage in a positive fashion.’

Dr Flint said that terms such as tubby, chunky, and chubby have been ‘ingrained’ in society but provoke negative emotions.

‘This is associated with mental health concerns, lower self-esteem and depression.’

It urges doctors to avoid ‘non-clinical terms, which can be disrespectful, judgmental and inappropriate’ such as: ‘You’re a bit on the chunky side, shall we say.’

The charity says language should be free from ‘judgement or negative connotations’ and that doctors should ‘ask permission’ to discuss a patient’s weight.