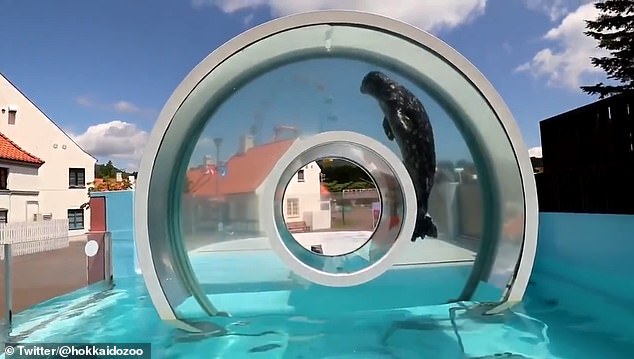 Seal of approval! Incredible footage shows the marine mammal whirling around the ring pool at an aquarium in Japan

Incredible footage has shown the fascinating moment a seal uses the ring water pool at the Noboribetsu Marine Park Nixe in Japan.

The aquarium’s official Twitter account shared the short clip, which was filmed in June 2020, and captures the moment a seal swims into the circular fixture, rising into the air before diving headfirst into the pool.

And thanks to the see-through structure of the pool ring, it gives the illusion that the seal is swimming in the air.

The aquarium, one of the largest in northern Japan, is located in Castle Nixe, modeled after a Danish castle, where visitors can see everything from sharks, giant octopus and salmon. 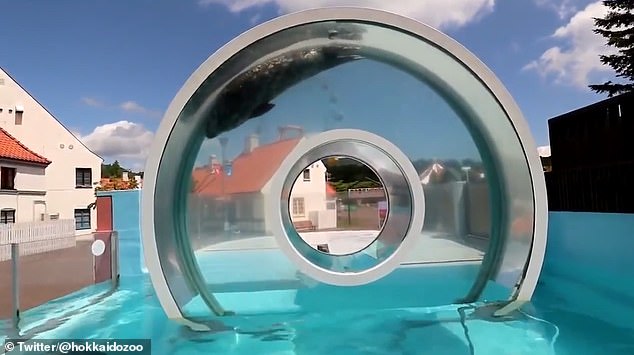 In the short clip, the seal can be seen swimming into the circular fixture, rising into the air before diving headfirst into the pool (pictured)

According to the website, visitors are also offered the opportunity to watch the seals being fed, but the ring-filled pool is just one of many attractions at the zoo.

Noboribetsu Marine Park is home to around 20,000 animals in 400 different species and boasts a display of both local and exotic marine life.

They can also gain close encounters with creatures like penguins and dolphins, and admire the unique castle-like structure of the aquarium. 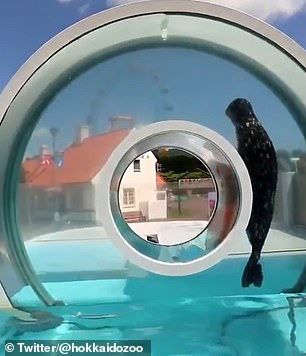 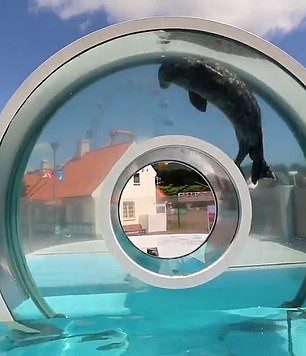 In the clip, the seal can be seen entering the circular fixture  (pictured left), before making its way around and heading to the exit (right) 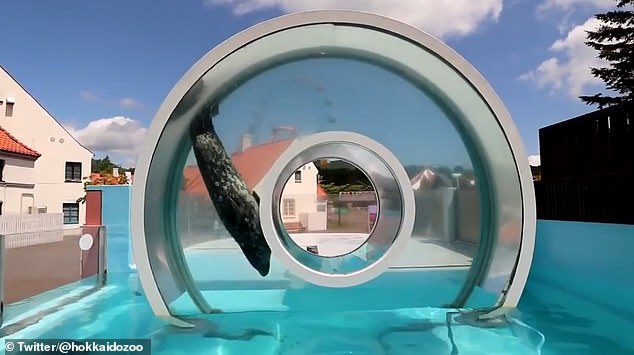 At the end of the footage, the seal can be seen diving head-first into the pool water (pictured)

In another of the aquarium’s unique zones, sea lions and fur seals can be seen cleverly performing tricks using rings and ball.

Elsewhere, visitors can witness the sardine light show at the Milky Way Pool – which features over 10,000 sardines swimming in unison.

There’s also a daily dolphin show which takes place in the all-weather pools, and those keen to do so, can also learn to train them.

Other attractions include a touch pool with small sharks and rays, a reptile house with snakes, turtles and lizards, a game arcade and a selection of children’s rides.