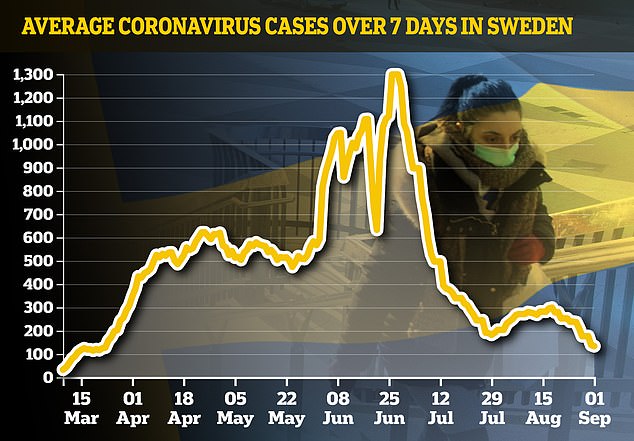 Swedish authorities have taken three children away from their parents after the youngsters were locked in their rooms for four months and the door to their house was ‘nailed shut’ over coronavirus fears.

The children, aged 10 to 17, were banned from leaving their apartment and even from seeing each other, according to lawyer Mikael Svegfors.

The parents, who do not speak fluent Swedish, allegedly ‘could not understand the news here’ and relied on information from their home country where strict lockdown measures had been imposed.

By contrast, Sweden became a closely-watched outlier in Europe after keeping schools, shops and restaurants open and continuing to play down the effectiveness of face masks. 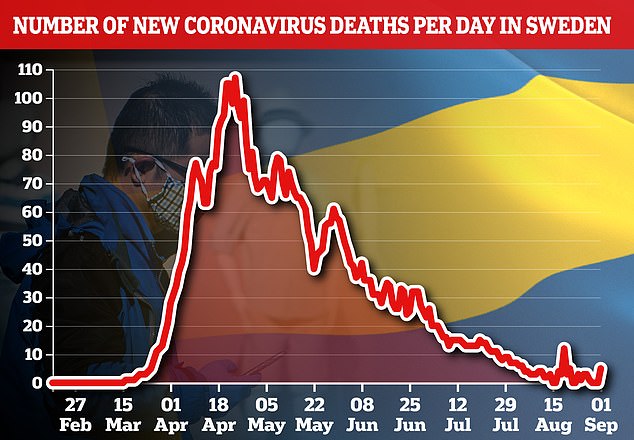 Deaths have also fallen sharply, although the overall death toll is significantly higher than in Denmark, Norway or Finland

The Jonkoping administrative court in southern Sweden said the three children had been locked in their own rooms and eaten their meals there.

They were not allowed to speak or play with each other and the door to the home was ‘nailed shut’, the court found.

Svegfors, who is representing the three children, said they were ‘prohibited from leaving the apartment’ between March and early July.

The parents deny locking in the children against their will and plan to appeal the ruling, local radio reported.

The parents ‘come from another part of the world’ and do not speak Swedish fluently, lawyer Svegfors said.

‘They couldn’t really understand the news here. They kept following the news feed over internet from their old country’ which had imposed much stricter confinement measures.

Sweden has one of the world’s highest death tolls relative to the size of its population, with 5,820 deaths in a country of 10million people.

The death toll is far higher than in Denmark, Finland or Norway, leading to criticism of Sweden’s light-touch strategy.

The government says its plan is intended for the long term because softer lockdown measures will be accepted by the public for longer. 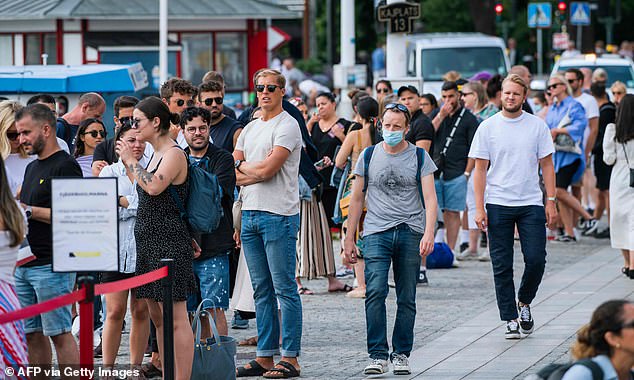 Sweden became an outlier in Europe after keeping shops, schools and restaurants open throughout the pandemic (pictured, people queuing up to board a boat in Stockholm)

Public health chief Anders Tegnell, the face of the no-lockdown strategy, has also continued to play down the usefulness of face masks.

Tegnell said last week that the limit for some public events could be raised to 500 people rather than 50, including concerts and football matches.

New cases, hospitalisations and mortality have fallen sharply over the past two months, even as much of Europe sees a rebound in cases.

August also saw only 81 new deaths announced from Covid-19, compared to 410 in July and 938 a month earlier.

But with Swedes returning from summer holidays and schools reopening last week, there are concerns the country could see a second wave of infections.

‘We don’t believe we’ll have a classic second wave, such as those seen in influenza pandemics where you get widespread contagion in the community again,’ Tegnell said.

‘This disease appears to work in a different way,’ he said in an interview with broadcaster TV4.

‘The spread is more patchy, so the likelihood is greater that we will see – as one is currently seeing around Europe – outbreaks in certain places, at workplaces and similar environments, during the autumn.’

Sweden’s finance minister Magdalena Andersson said last week that the economic situation is ‘very serious’ but is starting to recover.

‘There’s a great deal of uncertainty about how the pandemic will play out, and recovery may be protracted,’ she warned.

Unemployment is expected to rise to 9.5 per cent by next year and debt will rise to 43 per cent of GDP because of measures to tackle the crisis.

‘We will now use the collective economic strength that we have built up to restart the Swedish economy,’ Andersson said.