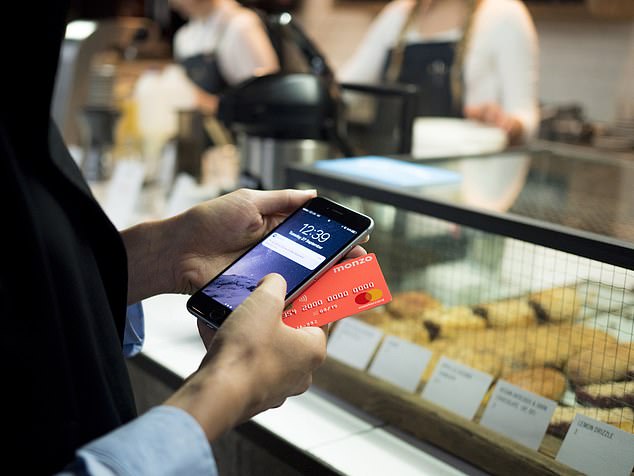 Monzo is set to become the first major UK bank to charge its customers to make withdrawals from an ATM, amid fears Britain is increasingly going cashless.

The smartphone bank said today it would charge customers a 3 per cent fee if they withdrew more than £250 from UK and European ATMs over a 30-day period from 31 October, unless they use the bank as their main current account.

While the changes, announced in a blog post on its website on Tuesday, are more about the bank trying to convince more customers to use it as their main current account, the news may still be something of a Halloween fright for those who worry about disappearing access to cash.

The UK was already becoming an increasingly cashless society, with figures published in June revealing fewer than a quarter of all payments were made using banknotes and coins in 2019.

The trade body UK Finance, which released the figures, predicted last year that cash would make up just 9 per cent of all transactions by 2028.

Since then, fears have grown that the coronavirus pandemic has only sped up this trend, with government guidelines advising consumers and businesses to use contactless payments wherever possible.

This is Money reported at the end of May that one of the UK’s largest ATM providers, NoteMachine, would launch a ‘cash is safe’ campaign to convince consumers to use it, such was its concern that fears of spreading the virus would further drive out the usage of physical money.

At the same time, there has also been a push towards digital banking, with many branches still operating reduced hours despite the easing of the coronavirus lockdown.

This has led to concerns that banks will use the coronavirus as an opportunity to close even more branches in a bid to cut costs, with 55 closing every month over the last five years on average, according to the consumer group Which?. 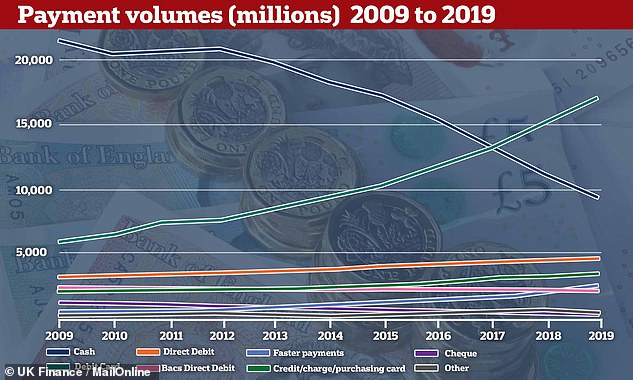 2019 saw yet further decline in the use of cash, as debit cards and contactless payments in particular continued to gain at its expense

But while the coronavirus lockdown may have left millions who may have banked in-branch with little choice but to go digital, millions of people and businesses across the country are still reliant on cash.

Figures released by the Post Office, increasingly relied on as ‘the last bank in town’ as banks close branches, found £1.8billion was deposited over the counter in July and £607million withdrawn, with personal cash deposits higher in June and July higher than in the same months last year.

And Link, which operates almost all the UK’s network of ATMs, found cash withdrawals were slowly recovering by the end of July, although they were still down 30 per cent compared to 2019, while a third of the 9,000 cash machines switched off during the lockdown were once again operational.

Cash has massively slumped in use over the last decade, but millions still rely on it

But Monzo, which has no branches and a much younger customer base more used to contactless payments and mobile banking, is at the vanguard of the changes reshaping UK banking, with the announced changes a potential vision into the future.

It wrote in the blog post detailing the changes that ‘the average Monzo customer only withdraws £36 a month’, while it said ‘around 20 per cent of customers make up more than 80 per cent of our cash machine costs.’

It said 79 per cent of its customers wouldn’t pay any fees, based on how they used the bank last year.

Monzo currently lets customers withdraw money in the UK and in European Economic Area countries without a fee, while they can currently withdraw £200 in a 30-day period outside of the EEA without paying any fees.

That allowance will be doubled for those who pay £5-a-month for its new Monzo Plus packaged bank account.

But from the end of October, those who don’t pay in £500 every 35 days and pay out at least one direct debit, have a Department for Work and Pensions payment of at least £500 paid in every 35 days, or pay in a student loan payment every eight months will have to pay a fee when withdrawing more than £250 a month.

Monzo’s close to 4million customers kept just £357 in their account last year on average, according to the bank’s latest financial results, suggesting customers use it as a spending account rather than a main bank account.

This will be a combination of those using it for holidays and making use of its sleek app to help budget.

To try and change this, it will also charge customers £5 if they need to replace their card if they don’t use the bank as their main current account, unless the card is stolen, or they fall victim to fraud.

If they do use it as their main bank account, demonstrated by fulfilling one of its requirements, customers will get two free card replacements before they have to pay.

It said: ‘We included at least one direct debit in our definition of “relying” on Monzo because we see paying bills from Monzo as a key indicator that we’re more than a spending account.’

The smartphone-only bank is seeking ways to shore up its revenue after its primary source of income, people using their debit cards in the UK and abroad, was hit by the coronavirus lockdown and the collapse in international travel.

It warned last month the coronavirus raised doubts over its ability to continue operating, stating its revenue had been ‘significantly impacted’ by the pandemic.

Monzo started life as a prepaid debit card which used the offer of fee-free spending and ATM withdrawals abroad to lure in customers. Fellow app-based banks Starling and Revolut had a much similar ploy.

But with Monzo now set to charge those who wish to use it purely as a holiday spending account more, if they withdraw more than £250 over a 30-day period, how does it compare to those two?

Starling does not charge fees for withdrawing money abroad, or for using its debit card abroad. It has no limit unlike Monzo, and works worldwide.

Revolut’s standard account offers the best exchange rate of the three when it comes to debit card spending, but also comes with a limit on UK and overseas ATM withdrawals.

THIS IS MONEY’S FIVE OF THE BEST CURRENT ACCOUNTS

Santander’s 123 Lite Account will pay up to 3% cashback on household bills. There is a £1 monthly fee and you must log in to mobile or online banking regularly, deposit £500 per month and hold two direct debits to qualify.

NatWest’s Reward Account pays out £5 a month in rewards if you pay out two direct debits a month of £2 each and log into mobile banking. The account comes with a £2 monthly fee and you must pay in £1,250 a month.

Club Lloyds’s Current Account offers benefits such as cinema tickets, magazine subscriptions and dining cards to current account holders. There is no cost if you pay £1,500 each month, otherwise a £3 fee applies. Must hold two direct debits to earn monthly credit interest.

TSB’s Classic Plus Account pays 1.5 per cent interest on balances of up to £1,500. You must pay out two direct debits, register for internet banking and go paperless.

Nationwide’s FlexDirect account comes with 2% interest on up to £1,500 – the highest interest rate on any current account – if you pay in at least £1,000 each month, plus a fee-free overdraft. Both perks last for a year.