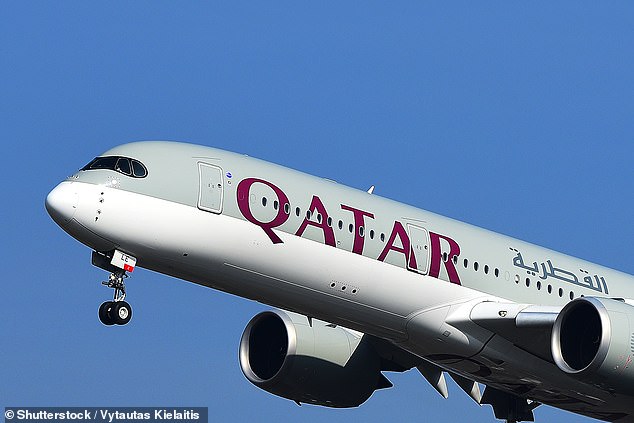 The crisis engulfing Boeing and Airbus intensified as another major customer asked to push back orders for more planes.

Qatar Airways has struck a deal with European plane maker Airbus to delay the delivery of new aircraft, after the coronavirus pandemic triggered a slump in global air travel that is expected to last for several years.

But the airline’s chief executive Akbar Al-Baker said it was still in talks with US group Boeing about its order, and hinted it could stop doing business with it in future if the two cannot agree.

Qatar Airways has struck a deal with European plane maker Airbus to delay the delivery of new aircraft, after the coronavirus pandemic triggered a slump in global air travel

He said: ‘As far as Boeing is concerned we are still in negotiations with them, but regardless of what they feel, an aircraft manufacturer needs to oblige customers in difficult times. People who will not oblige and stand with us in this difficult time will not see us again.’

Al-Baker did not say how many planes had been delayed with either company.

Airlines are bracing to carry fewer passengers until around 2025.

It is thought it will be especially difficult for companies that make a lot of their money from long-distance routes, as the short-haul market for holidays and business travel is expected to pick up a lot sooner.

Qatar has made a name for itself for being a connecting hub in the Middle East between the East and the West – so it is likely to suffer sorely from the collapse.

Al-Baker said: ‘We have the ability to bring forward the deliveries if there is a rebound in air travel.’

But, he added, the airline had not reached an agreement with Boeing. Qatar has dozens of orders with both firms, including 50 for Airbus’s A321neo and 60 Boeing 777X planes.

Al-Baker’s threat comes as Boeing and Airbus have seen a slew of orders cancelled or pushed back since the Covid crisis began.

In July alone Boeing customers cancelled plans to buy 43 of its 737 Max planes.

In April, Easyjet pushed back orders for 24 aircraft from Airbus until between 2025 and 2027.

It followed a bust-up with the budget carrier’s founder, Sir Stelios Haji-Ioannou, who wanted Easyjet to cancel the £4.5billion order for 107 planes entirely to save cash.

The jets were originally meant to be delivered this year, next year and in 2022. Both plane makers have now scaled back their production schedules – with Boeing retiring its iconic 747 jumbo jets by 2022 and cutting the number of 737 Max and 787 Dreamliner jets it makes every month.

And Airbus is planning to make just five of its A350 jets per month – down from 9.5 in April.

They are also planning mass lay-offs to counter the collapse in demand, as well as making swingeing cost cuts throughout their businesses.