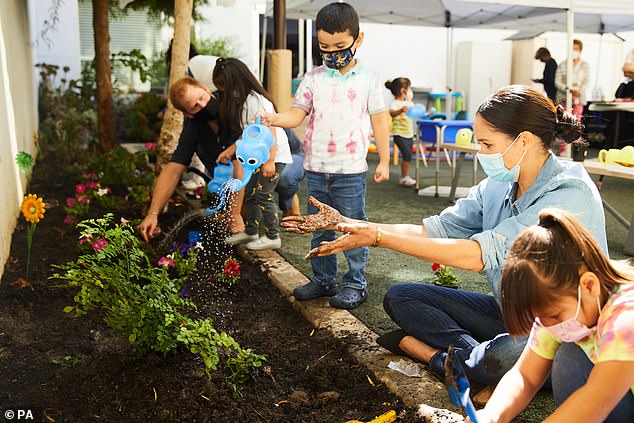 Prince Harry and Meghan Markle’s visit to a LA preschool has been questioned by parents who aren’t allowed to enter their children’s schools due to Covid-19 policy.

The Duke, 35, and Duchess of Sussex, 39, who donned face masks, planted forget-me-nots in honor of Princess Diana during the visit to the the Assistance League Preschool Learning Center on the 23rd anniversary of her death on Monday.

But while many praised the royals for their charity work, others were less impressed that they were allowed inside – despite rules surrounding the coronavirus pandemic.

‘I could not even hold my daughter’s hand and take her into school last week when she started kindergarten. These two just ‘turn up and break the rules’ whenever they feel like it?’ wrote one,’ while a second added:  ‘Not safe to go back to school but safe for mingling with strangers for a photo op.’

The Duke and Duchess of Sussex during a visit in honor of his mother’s memory to the Preschool Learning Center (a program of the Assistance League of Los Angeles) on Sunday August 31, 2020

Taking to Twitter, one person wrote: ‘I could not even hold my daughter’s hand and take her into school last week when she started kindergarten. These two just ‘turn up and break the rules’ whenever they feel like it?’ (pictured)

A third commented: ‘Exactly I can’t take a pencil to my child right now. NO visitors. No exceptions.

‘They have no respect for the rules as they are ‘humanitarians’ they are the exception? BS kids in the US have no clue what a Duke/Duchess even is but they can come in when I can’t..for a pic?!?

The couple could be seen digging with trowels into dirt and planting flowers as they visited the at risk children in Los Angeles, with Prince Harry and Meghan also planting forget-me-not-seeds in memory of Princess Diana.

According to the couple’s biographer Omid Scobie, they went on to play nursery rhymes in the garden with the youngsters and also spent time reading books about gardening and vegetables.’

While some criticized the royals for their closeness to the children, others praised them for their visit (pictured)

It read: ‘Modify daily operations to minimize exposures (e.g. avoid the use of touchscreens for sign-in/out, ask parents to bring their own pens to sign in, implement valet services or have staff meet children as they arrive to avoid parents coming into the childcare center).’

And while some admired the royals for making an appearance, they still expressed confusion as to why the Duke and Duchess of Sussex could head inside a preschool – when some parents have been advised not to.

‘I think any charity for children is lovely, kudos for that,’ commented one. ‘But… did they really need to have their favorite photographer there?

‘And why, if the school childrens’ own parents aren’t allowed inside due to COVID, they are there, with their photographer??

However, another could only see the positives and commented: ‘Visibility means donations. So go donate to this cause.’

A further agreed: ‘It’s soo great seeing Harry and Meghan visit this Preschool, and their interaction with the little ones!!’