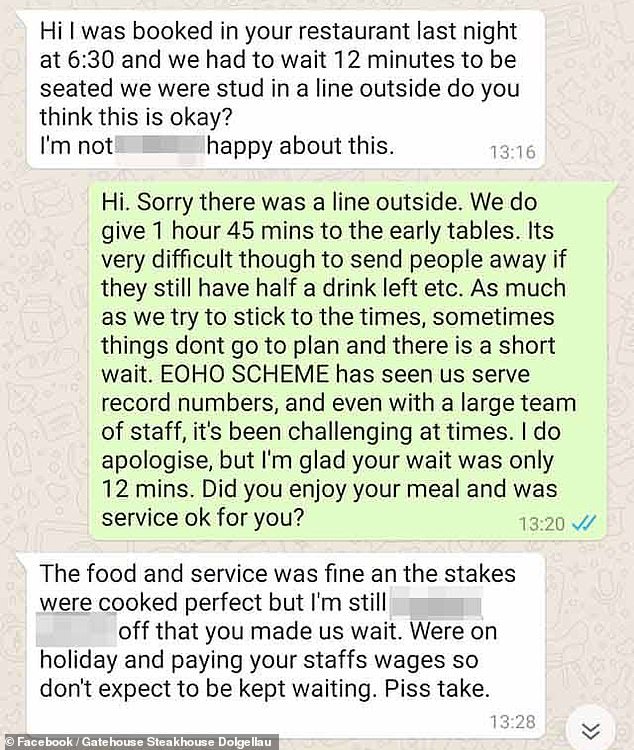 A steakhouse owner has hit back a disgruntled customer, branding them an ‘absolute spanner’ after they threatened to leave a bad TripAdvisor review because they had to wait to be seated for 12 minutes.

Hundreds of people headed to the Gatehouse Steakhouse in Dolgellau, Snowdonia to take advantage of Rishi Sunak’s Eat Out to Help Out scheme, but one diner was less than pleased with their service, The Sun reports.

The owner of the popular restaurant took to Facebook to share the bizarre expletive-laden exchange he had with the customer, who threatened to slap them when they were not offered a free meal or their money back.

The owner of Gatehouse Steakhouse in Dolgellau, Snowdonia, hit back at a less than impressed customer who went on an explosive rant at them because they were made to wait 12 minutes for a seat in the restaurant 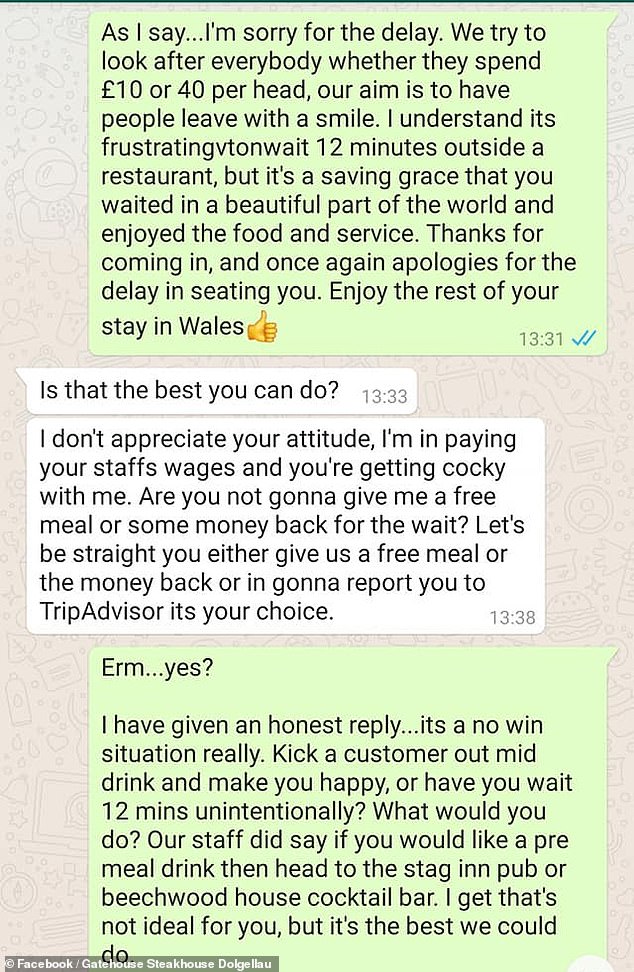 The customer, whose name was blurred out from the WhatsApp screenshots, complained to the owner about being made to wait.

Keen to uphold a level of professionalism when responding to the message, the owner apologised and explained the restaurant had served a record number of people off the back of the EOHO government scheme.

Before long the conversation turned sour after the customer suggested they were  ‘paying the restaurant staff’s wages’ by eating there – something the owner disputed.

The angry individual, who tried to blackmail the owner into giving them a free meal, then launched into an explosive rant, writing: ‘F*** you I’ll just write a s*** review and f*** up your business. 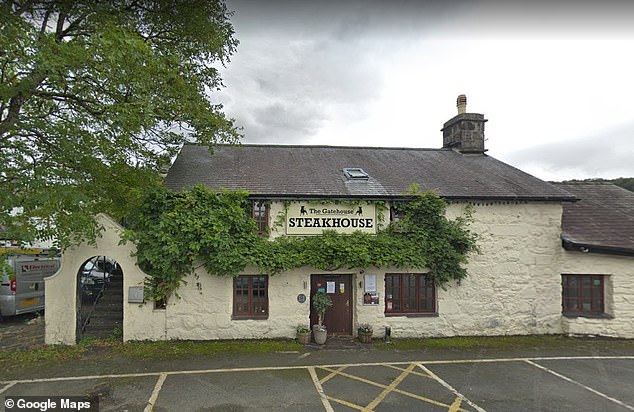 In order to explain the delay, the restaurant owner told the customer that they had served a record number of people over the past few weeks thanks to the government’s Eat Out to Help Out scheme 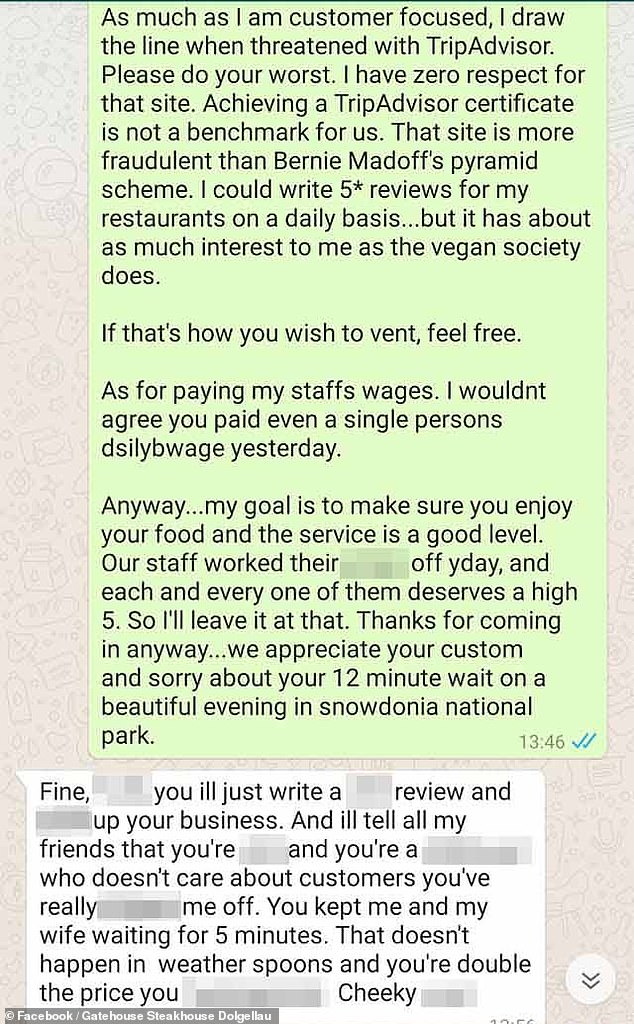 Despite the polite explanation, the customer began to get increasingly irate and started to up the number of swear words they sent in their responses to the restaurant owner

‘You kept me and my wife waiting five minutes. That doesn’t happen in Wetherspoons and you’re double the price you f*****g p****. Cheeky c***.’

Joking the exchange ‘escalated quickly’, the owner observed they’d never been called these names before and advised the customer to enjoy the ‘delights’ of Wetherspoons in future.

To which the owner replied: ‘I’m at the Gatehouse Steakhouse now should you wish to slap me… hands full making five kilos of coleslaw but I can take a break.’

The business decided to share the Whatsapp messages on their Facebook page, which have since gone viral.

As the scheme drew to a close on Monday, the company praised Eat Out to Help Out for being ‘fantastic for the hospitality industry’. 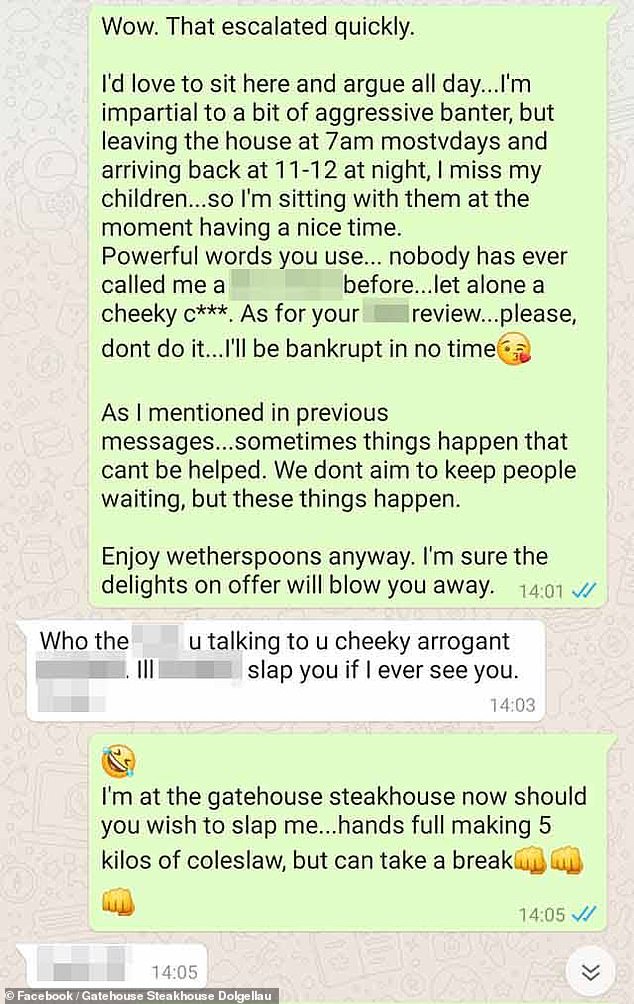 The restaurant owner shared the bizarre interaction on the company’s Facebook page which has since gone viral. They praised the government scheme and said it helped boost their industry 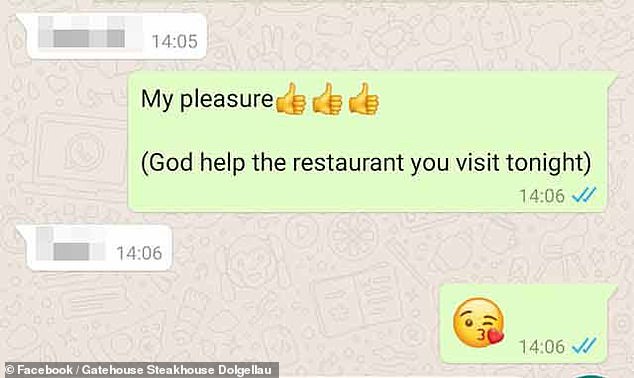 After a heated exchange the conversation ended on a sour note, with the customer sending a range of swear words. The owner called the customer an ‘absolute spanner’ on Facebook

The post read: ‘It’s helped us claw back so much lost revenue and there has been a real buzz about Dolgellau.

‘I hope all of the other businesses have enjoyed it as much as we have.

‘Whilst we have done everything to maximise business and make customers happy, there is always one absolute spanner.

‘Thanks to everybody… Tourists and our amazing locals who have been amazing, patient and enjoyed what we offer.’