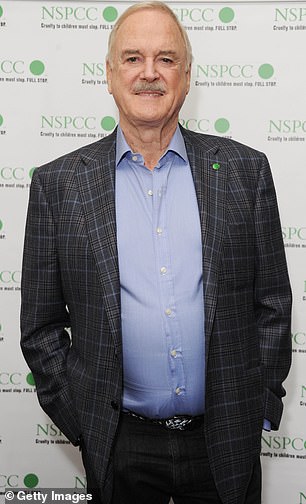 John Cleese has criticised the ‘stifling’ effect of political correctness on creativity – saying there is no such thing as a ‘woke joke’.

The former Monty Python star, 80, said Britain should not organise its society around ‘the sensibilities of the most easily upset people’, because that would lead to a ‘very neurotic society’.

Mr Cleese said that ‘affectionate teasing’ is a bonding mechanism, telling BBC Radio 4’s Today programme: ‘PC stuff started out as a good idea which is, ”Let’s not be mean to people”, and I’m in favour of that… despite my age.

‘I think Jesus Christ would have agreed… The main thing is to try to be kind.

‘But that then becomes a sort of indulgence of the most over-sensitive people in your culture, the people who are most easily upset.’

After Mr Cleese made the comments on Radio 4 Today show, people took to social media to post their funniest ‘woke’ jokes. 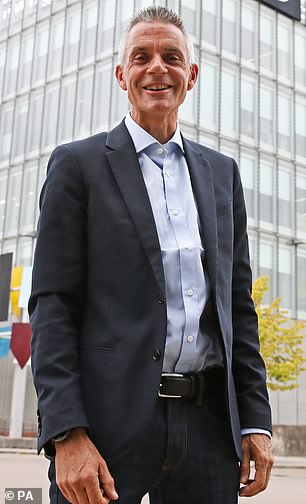 John Cleese (left) has criticised the ‘stifling’ effect of political correctness on creativity – saying there is no such thing as a ‘woke joke’. 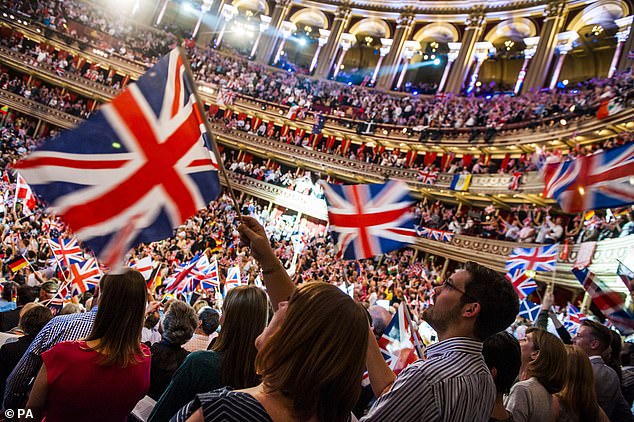 Pictured: The audience enjoying the BBC Last Night of the Proms, at the Royal Albert Hall in London. Land Of Hope And Glory and Rule Britannia! will be performed at this years’ Last Night Of The Proms, the BBC has said

After Mr Cleese made the comments on Radio 4 Today show, people took to social media to post their funniest ‘woke’ jokes

Twitter user Paul Dempsey wrote: ‘An Englishman, an Irishman and a Scotsman walk into a bar.

‘What a fantastic display of the Union’s centuries-long multiculturalism.’

Are these ‘woke’ BBC comedians facing the chop? How the likes of Jo Brand, Nish Kumar and Russell Howard could be at risk in Tim Davie’s left-wing comedy overhaul

Comedian Jo Brand landed herself in hot water with BBC chiefs after she made a joke on Radio Four’s comedy show Heresy about throwing battery acid over ‘unpleasant’ politicians.

She branded the throwing of milkshakes on politicians such as Nigel Farage as ‘pathetic’ and added: ‘Why bother with a milkshake when you could get some battery acid?’ 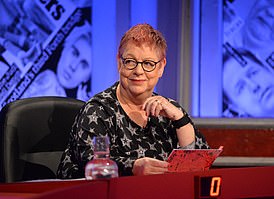 Her quip, in June last year, was initially defended by the BBC, who later admitted Ms Brand had ‘gone too far’ – while the 63-year-old also apologised.

Regulator Ofcom earlier this year said the star’s comments had the ‘potential to offend listeners’, but it was unlikely to encourage or incite the commission of a crime.

Jo Brand has occasionally hosted long-running satirical panel show Have I Got News For You – starring Paul Merton and Ian Hislop.

The show, which features changing guests hosts, including self-confessed ‘life-long Tory’ Jeremy Clarkson, has come under fire over claims of anti-Conservative bias.

Earlier this year it received complaints from viewers over its discussion of top Tory aide Dominic Cummings following revelations of a trip from London to Durham while Britain was in lockdown.

BBC bosses reviewed the complaints but said the story did not receive ‘disproportionate’ coverage.

Comedian Nish Kumar is the host of BBC Two’s The Mash Report which has faced criticism over its satirical pieces poking fun at Brexit and the Conservatives. 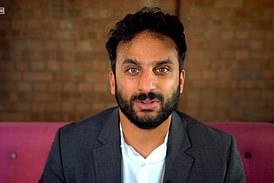 Nish Kumar has also faced criticism, with satirical pieces poking fun at Brexit and the Conservatives

In one piece, about the government’s Brexit advertising plan, headed up by Michael Gove, comedian Rachel Parris said: ‘He’s a good man,’ prompting host Nish Kumar to respond ‘Is he?’

Ms Parris then responds: ‘No,’ prompting laughter from the audience.

Hosted by Mr Kumar, Horrible Histories Brexit suggested Britain had historically failed to produce anything of note, relying instead on imports.

BBC broadcaster Andrew Neil called it ‘anti-British drivel of a high order’ and asked: ‘Was any of the licence fee used to produce something purely designed to demean us?’

Mr Neil, chairman of the group behind right-leaning magazine The Spectator, also hit out at the Mash Report as ‘self satisfied, self adulatory, unchallenged Left-wing propaganda.’

Other comedians such as Russell Howard have also sparked claims of political bias. 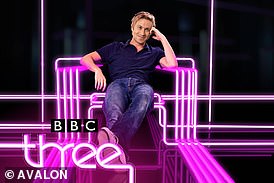 Last year, the comedian spoke to music magazine NME to whom he described politicians, including Nigel Farage, as ‘right-wing f**k-knuckles’.

He was also part of panel show, Mock the Week, which has in the past been accused of anti-Conservative and anti-Brexit bias.

Carolyn Wright said: ‘Little Jack Horner sat in the corner eating his Christmas pie, he stuck in his thumb and pulled out a plum and said “I acknowledge that others don’t have the privileges I do and hope the example I set is proof that I believe in the equality of people from every background”.’

One user wrote: ‘I keep hearing the term LGBTQ+. But asking what it means, I can never get a straight answer.’

In his first major intervention as director-general, Mr Davie – on only his second day in the job – overturned the hugely controversial decision to play only instrumental versions of Rule Britannia and Land of Hope and Glory at the Last Night of the Proms.

The broadcaster put out a shock statement announcing there would now be a ‘select group of BBC Singers’ performing the songs. It added: ‘We hope everyone will welcome this solution.’

It followed huge public outcry at the revelation last week – when Tony Hall was still director-general – that there would be ‘new orchestral versions’.

Former Fawlty Towers star Mr Cleese today added: ‘From the point of creativity, if you have to keep thinking which words you can use and which you can’t, then that will stifle creativity.

‘The main thing is to realise that words depend on their context. Very literal-minded people think a word is a word but it isn’t.’

Teasing can be a ‘bonding mechanism’ as well as the ‘nasty, mean, unkind’ type designed to ‘put people down’, which is ‘completely wrong’, the comic said.

‘There’s also affectionate teasing which is the sort of teasing we do in families and work groups that know each other, just making fun of each other in gentle ways.

‘That’s a great source of fun and enjoyment, a verbal dual – who can make the best rude remarks all in an atmosphere of affection. It’s a bonding mechanism. It’s positive.

‘PC people simply don’t understand this business about context because they tend to be very literal-minded.

‘I would love to debate this… The first question I would say is, ‘Can you tell me a woke joke?’

‘I don’t know what a woke joke would be like… It might be heart-warming but it’s not going to be very funny.’

The BBC’s decision to bring back the singing of Rule Britannia and Land of Hope and Glory at Last Night of the Proms represents a humiliating U-turn.

Downing Street said Boris Johnson – who had accused the BBC of ‘wetness’ – ‘welcomes the decision’. Labour leader Sir Keir Starmer added: ‘It is the right decision.’

A poll for the Daily Mail last week found that 59 per cent of Britons believed the broadcaster was in the wrong over the row, rising to 80 per cent among over-65s.

There was praise for Mr Davie, with former Tory minister David Mellor saying: ‘Well done him.’

A senior BBC executive called the U-turn ‘sensible and unsurprising’, and said if Mr Davie, 53, had been in charge earlier ‘this would have been the original decision’.

Mr Davie’s swift and decisive action is being seen as a statement of intent that he wants to tackle concerns that the BBC is dominated by ‘woke’ Left-wing politics.

He told staff on his first day on Tuesday that the BBC must represent ‘every part of this country’.

In its surprise statement yesterday, a BBC Proms spokesman said: ‘The pandemic means a different Proms this year and one of the consequences, under Covid-19 restrictions, is we are not able to bring together massed voices.

‘For that reason we took the artistic decision not to sing Rule Britannia and Land of Hope and Glory in the [Royal Albert] Hall.

‘We have been looking hard at what else might be possible and we have a solution. Both pieces will now include a select group of BBC Singers.

‘This means the words will be sung in the Hall, and as we have always made clear, audiences will be free to sing along at home.’

The statement added: ‘While it can’t be a full choir, and we are unable to have audiences in the Hall, we are doing everything possible to make it special and want a Last Night truly to remember.

‘We hope everyone will welcome this solution. We think the night itself will be a very special moment for the country – and one that is much needed after a difficult period for everyone.

‘It will not be a usual Last Night, but it will be a night not just to look forward to, but to remember.’

Musicians are playing live, without an audience because of coronavirus restrictions, for the final two weeks of the season. It concludes with the traditional Last Night.

The change in policy was warmly welcomed yesterday by the many critics of the earlier move.

Nigel Farage, leader of the Brexit Party, said: ‘This just shows the power of public pressure and how hopelessly out of touch the BBC are with their own licence fee payers.’

Rob Butler, the Conservative MP for Aylesbury, said: ‘I’m very pleased indeed. This should never have been in doubt.’

Actor Laurence Fox tweeted: ‘You are all amazing! They have to listen if we speak loud enough.’

Lord Hall previously said it was a ‘creative’ decision to remove the lyrics. But he confirmed that the issue of dropping songs because of their association with Britain’s imperial past had been discussed.