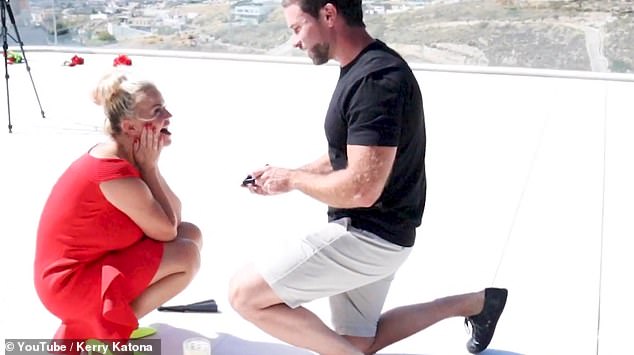 Kerry Katona shared the moment her boyfriend of two years Ryan Mahoney proposed in Spain ahead of her 40th birthday last week.

The reality star, 39, took to YouTube on Wednesday to upload a video of the health and nutrition expert, 31, getting down on one knee to pop the question – a plan her children and pals were already aware of.

Overwhelmed with emotion, the former Atomic Kitten star joked about her three failed marriages before local police ordered the group to turn down the music at their ‘loud’ celebration.

‘I can still pull ’em!’ Kerry Katona shared the moment her boyfriend of two years Ryan Mahoney proposed in Spain ahead of her 40th birthday

The singer couldn’t contain her shock and fell to the ground once she realised what Ryan had up his sleeve.

‘Are you mad? Are you sure? You know my track record right? I can’t believe it’, the mother-of-five said in reference to her tumultuous romance history.

Kerry married Westlife’s Brian McFadden, 40, in 2002, but he filed for divorce in 2004 and embarked on a seven-year relationship with Australian singer Delta Goodrem shortly after.

The former couple’s divorce was finalised in 2006, before the mother-of-five went on to tie the knot to taxi driver Mark Croft, 49, on Valentine’s Day in 2007. 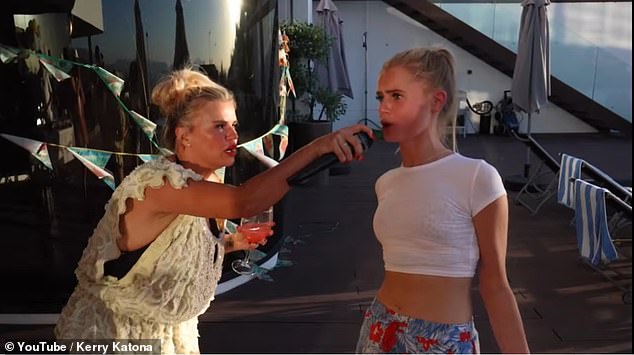 Uh oh: In a YouTube clip shared on Wednesday, the 39-year-old reality star’s celebration was interrupted by police over noise complaints 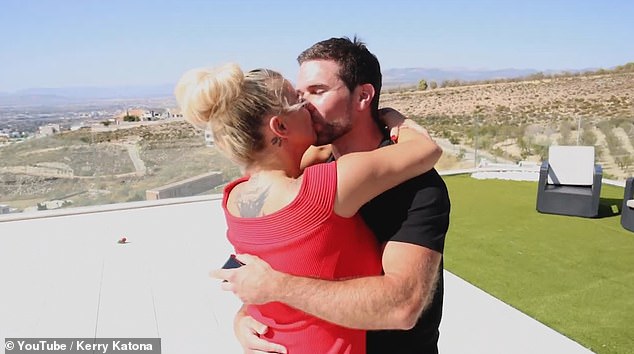 ‘Are you sure?’ The singer uploaded a video of the health and nutrition expert, 31, getting down on one knee to pop the question 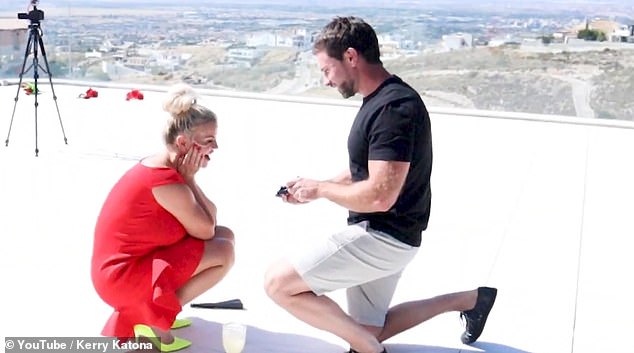 Tender moments: The musician couldn’t contain her shock and fell to the ground once she realised what Ryan had up his sleeve

They split just two years later, and Kerry was married to George Kay from 2014 until 2017, who sadly died from an overdose last year aged 39.

She raises children Molly, 18, and Lilly-Sue, 17, with Brian, while she shares Heidi, 13, and Max, 12, with second spouse Mark and had Dylan-Jorge, six, with former sports star George.

Despite her unlucky stints in love, her toyboy insisted he’s more than certain about his decision as he placed the floral-inspired engagement ring on the artist’s finger, adding: ‘I’m positive, I love you, and the ring as well! It’s good init! I’ve been thinking long and hard.’

Continuing to gush over the band, Ryan repeated: ‘How nice is that ring though?’, before the blonde jokingly hit out: ‘You’re not marrying the ring, you’re marrying me! It’s unbelievable.’ 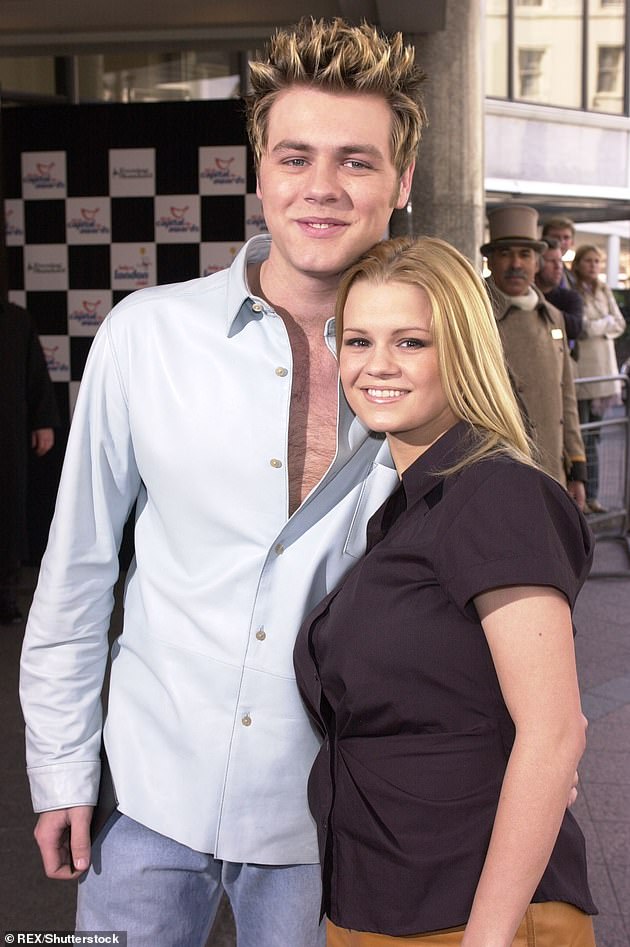 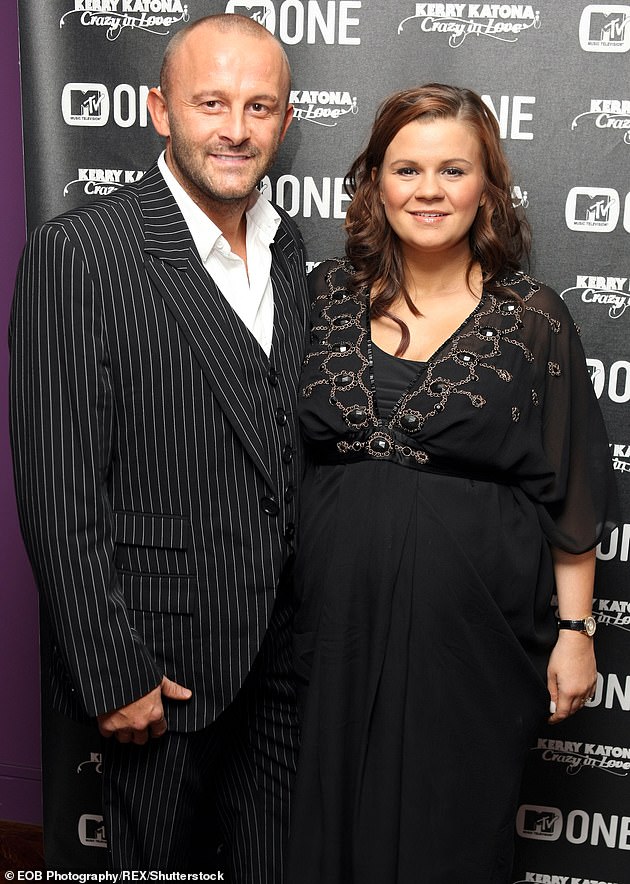 Former husband: The mother-of-five went on to tie the knot to taxi driver Mark Croft, 49, on Valentine’s Day in 2007 and they split just two years later (pictured in 2008) 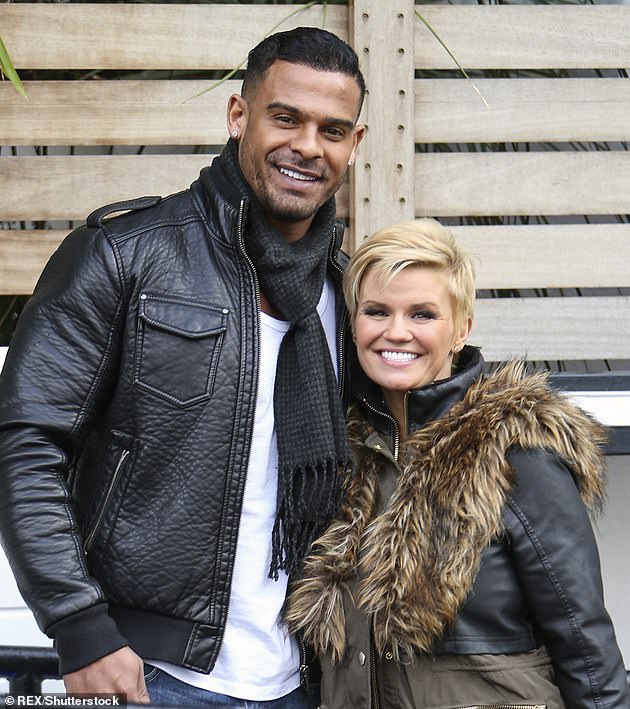 Failed relationship: Kerry was married to George Kay from 2014 until 2017, who sadly died from an overdose last year aged 39 (pictured in 2015)

As her kids revealed they were in on the surprise, Kerry’s cheeky son Max quipped: ‘The ring is lovely, you should sell it!’

The media personality went on to enthuse her new accessory is ‘definitely been the best ring I’ve had so far’, before moaning about its weight.

The TV star said: ‘I had a weird feeling about today, I didn’t know what it was going to be. The ring is actually heavy, you might have to hold my hand. It’s meant to be.’

Teasing details about their upcoming quickie wedding, fitness enthusiast Ryan said: ‘[I want to get married in] a couple of weeks! It’s got to be Vegas hasn’t it? It feels no different to yesterday, but feels good. It’s about time, it’s the right time.’ 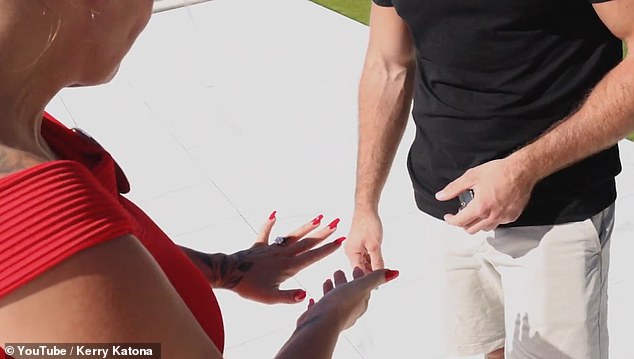 ‘I’m positive’: Despite her unlucky stints in love, her toyboy insisted he’s more than certain about his decision as he placed the floral-inspired engagement ring on the artist’s finger 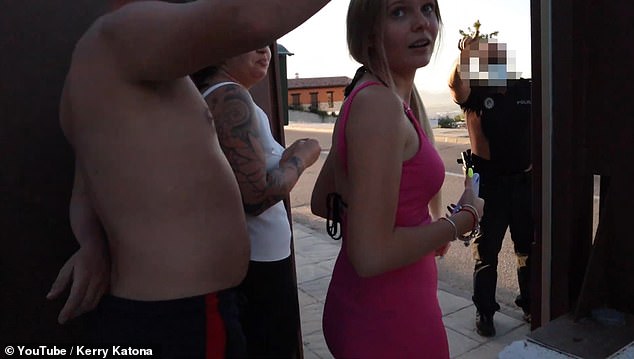 Halt: The pair and their fellow holidaymakers let loose before authorities arrived at their villa to tell them to quieten down as their bash could be heard from the other side of the mountain

‘It feels like this is how it should be. The ring is phenomenal but this feels like it’s the natural step to take, after two years’, an elated Kerry added. ‘I can still pull ’em!’

She continued: ‘Me and Ryan have spoken about marriage as we’re partners as well and when we speak to companies.

‘I think ”er” when I tell them to speak to my boyfriend, I rather say ”speak to my husband or partner.” We planned to go to Vegas and get married with just the children, but I wasn’t expecting him getting down on one knee.’

The duo later FaceTimed the bride-to-be’s mother Sue, who broke down in tears and revealed she was informed about his plans to ask for her hand in marriage before the proposal took place. 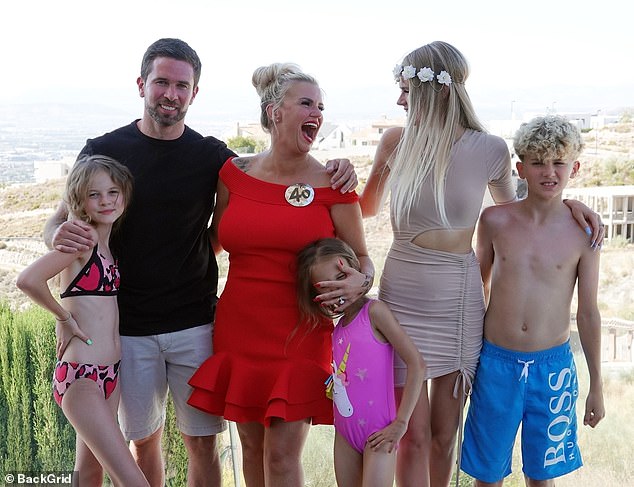 Big family: The former Atomic Kitten star, who will celebrate her 40th birthday on Sunday, is already mother to five children from previous relationships 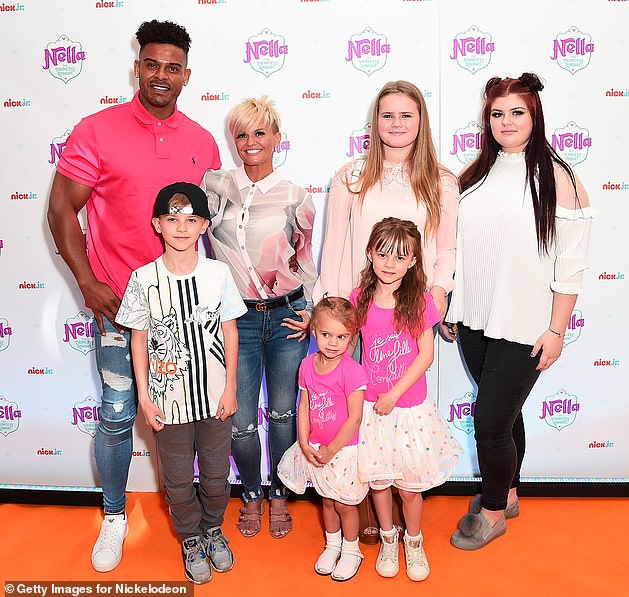 Giving her mum and future stepdad the seal of approval, Heidi said: ‘It’s really cool as I went to go and get the ring with Ryan.’

The newly-engaged pair and their fellow holidaymakers let loose as they enjoyed a spot of karaoke to Spice Girls, before local authorities arrived at their villa to tell them to quieten down as their raucous bash can be heard from the other side of the mountain.

Earlier this week, Kerry revealed she’s in no rush to have children with Ryan, after she ‘nearly died’ giving birth to her youngest child.

She said in her new! magazine column: ‘I think it’d be really selfish when I have five amazing, to get pregnant again knowing how I almost died in labour last time. Why put myself through that when I could go through surrogacy? So watch this space.’

While Kerry Katona has much to celebrate with the joyous news that she’s taking another trip down the aisle, her road to romantic bliss has been quite the rocky one. The Warrington native has already made three trips down the aisle, with each marriage coming to a tumultuous end. And with a handful of relationships in between, it’s fair to say that the star now deserves her shot at happily ever after. Below is a list of the star’s marriages and relationships. 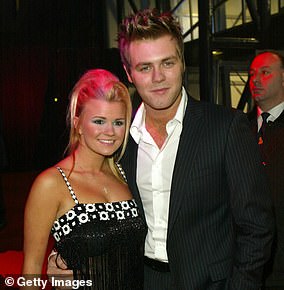 It was a match made in pop heaven when Kerry and BrianMcFadden met while their respective bands, Atomic Kitten and Westlife, toured together in 1999. Such a whirlwind was their romance that Brian proposed within three months of the pair getting together and they welcomed their daughter Molly in 2001. A lavish celebrity wedding followed in 2002, and a year later, they welcomed their second daughter, Lily-Sue.  But, alas, it wasn’t meant to be, as in 2004 the couple announced their separation amid allegations Brian had cheated on Kerry with a lapdancer. Heartbroken Kerry was granted a quickie divorce. 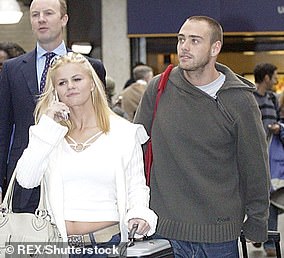 Kerry very briefly got back together with her ex, Dan Corsi, who she first dated in 1998. During their time together, they visited Kerry’s native Warrington and were also seen partying up a storm at London hotspot-of-the-moment Pangaea. Dan boasted about bedding the star, saying: ‘Spending the night with Kerry was all I hoped it would be. I thought she’d find it hard to be with someone else after being with Brian for five years, but it felt natural.’ However, friends reportedly feared that Dan was just cashing in on Kerry’s fame, amid reports he still lived with his ex, while simultaneously texting another former flame.  It took just six weeks of rekindled romance before Kerry, feeling that it was too soon after the breakdown of her marriage to embark on another relationship, reportedly dumped Dan over the phone. Surprisingly, her ex-husband Brian publicly shared his opinions on Dan, telling The Mirror at the time: ‘I‘ve known him for a while and I know he’s not the one for her. I don’t want her to get hurt. Despite everything that’s gone on, I just want her to be happy.’ 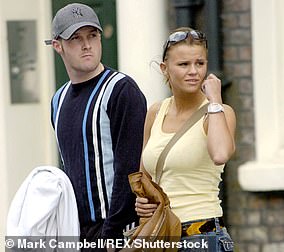 In huge contrast to her glitzy showbiz marriage, Kerry embarked on a romance with her former childhood sweetheart, Dave Cunningham, with the couple announcing their engagement in 2005. However, it wasn’t long before their relationship hit the rocks, with the pair getting into a furious row while holidaying in Spain, amid rumours Dave had been seeing his ex-girlfriend behind her back. A source told People at the time: ‘Kerry is devastated. After everything she has gone through this year she truly believed Dave could be her saviour. Then the shocking revelations about his ex emerged.’ 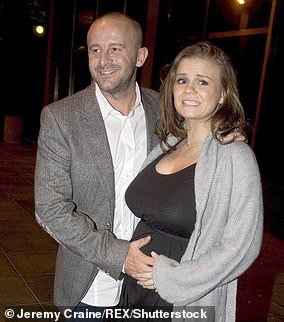 Six weeks after her split, Kerry was swept off her feet by taxi driver Mark Croft. He proposed in 2006 after just six weeks of dating, and they tied the knot on Valentine’s Day 2007. Their marriage produced two children: daughter Heidi and son Maxwell. However, the union came about during a tumultuous time in Kerry’s life, as she watched her fortune (which once peaked at £6.8million) dwindle to the point that she was declared bankrupt. During her marriage, she also made her infamous appearance on ITV’s This Morning, where her slurred speech prompted concern among viewers. She ultimately admitted to a cocaine addiction, as she confessed: ‘I hated my life. I’d lie in bed for three days in a row doing cocaine with Mark. We did coke in our en suite and had a lock on the door. The kids knew if the bathroom door was locked they mustn’t come in.’ After having even considered suicide during their marriage, the couple split in 2010. Mark would later admit that he ‘bled Kerry dry’ during their ill-fated relationship. 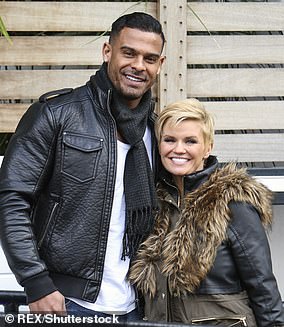 It appeared that a change of fortune was on the cards for Kerry 2012, when she met George Kay, who at the time was working as her driver. Sparks flew between the pair, prompting former rugby player George to pop the question at the top of Blackpool Tower in April 2013. exactly one year later, more joy was brought into their home when Kerry gave birth to their daughter Dylan-Jorge. A trip down the aisle followed in September 2014, and it seemed that Kerry had finally found the elusive One. But trouble entered their relationship just two months after the wedding, when George was hospitalised after showing ‘signs of a stroke’, leaving Kerry struggling to cope. Her struggles in dealing with George’s behaviour led to the couple splitting, though they would eventually get back together and renew their wedding vows. However, things would eventually come to a complete end in 2017, amid accusations of domestic violence on George’s part. But the heartbreak didn’t end there, as in July 2019, George unexpectedly passed away aged 39. 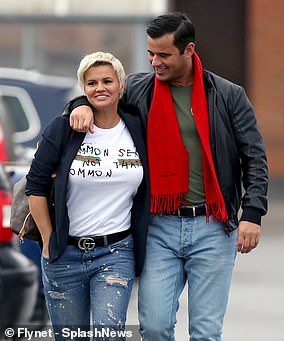 It took just weeks for the star to embark on a new relationship following her spit from George. Showing she was a woman of the times, Kerry went Instagram official with her handsome new boyfriend James English in 2017. And while the numerous posts of herself spending time with the Scottish comedian were shared on social media, the pair soon quietly went their separate ways within just two months. In fact, their split was so quiet that it wasn’t noticed until the star spoke about being a singleton once again.