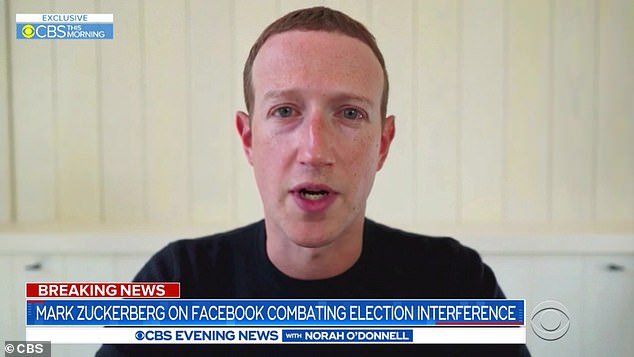 Facebook will ban all new political advertisements the week before the election, founder Mark Zuckerberg announced Thursday as part of a series of moves to prevent interference in the November contest.

‘We’re going to block new political and issue ads during the final week of the campaign. It’s important that campaigns can run get out the vote campaigns, and I generally believe the best antidote to bad speech is more speech, but in the final days of an election there may not be enough time to contest new claims,’ Zuckerberg wrote in a Facebook post.

The sweeping set of actions – the biggest the company has announced to date – comes amid what is expected to be a contentious election between President Donald Trump and Democratic candidate Joe Biden. Election Day is two months away.

‘This election is not going to be business as usual. We all have a responsibility to protect our democracy,’ Zuckerberg wrote.

The founder and CEO of Facebook said the policies would apply to President Trump, who has had previous social media posts flagged for containing misleading information.

‘This will definitely apply to the president once this policy goes into place and it will apply to everyone equally,’ Zuckerberg told CBS ‘This Morning.’

He admitted to having conversations with President Trump about his social media use.

‘I have had certain discussions with him in the past and where I’ve told him that I thought some of the rhetoric was problematic. If I did talk to him, you know, be clear about how — just the importance of making sure that people have confidence in the election,’ he added. 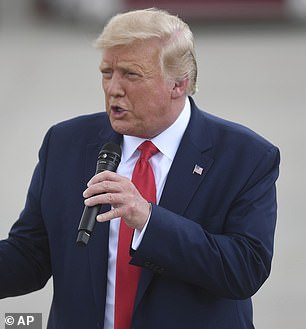 The changes were announced amid concerns about the role social media companies will play in the November contest.

Facebook has become one of the main campaign battlegrounds between Trump and Biden. The president’s campaign and its supporting entities have dropped ad after ad against his Democratic rival – some of which have been banned and others flagged for misleading content. Biden’s campaign has been critical of Facebook for not doing more to counter the false information.

Zuckerberg’s announcement included a warning about possible unrest and voter disenfranchisement in the build up to November 3.

‘The U.S. elections are just two months away, and with COVID-19 affecting communities across the country, I’m concerned about the challenges people could face when voting,’ he wrote. ‘I’m also worried that with our nation so divided and election results potentially taking days or even weeks to be finalized, there could be an increased risk of civil unrest across the country.’

Zuckerberg outlined a series of other changes, including information on how to register to vote and vote by mail available on the social media platform, working with officials to remove misinformation about voting, limiting forwarding on Facebook Messenger, and clamping down on attempts to claim victory should the November results not be known in a timely manner.

With more than 80 million voters expected to vote by mail this year due to the coronavirus pandemic, election results may not be known quickly after the November 3 contest as ballots trickle in.

Facebook will also refute attempts to delegitimize the election, something Democrats fear President Trump will try to do. The president has already claimed that voting by mail can lead to election fraud despite numerous studies showing that it does not.

Zuckerberg said the network will add warnings to any content meant to ‘delegitimize the outcome of the election or discuss the legitimacy of voting methods, for example, by claiming that lawful methods of voting will lead to fraud.’

The company will also continue to remove conspiracy groups like QAnon from its platform.

And Facebook will remove any posts that convey misinformation about COVID-19 and voting.

Facebook and other social media companies have been under increased scrutiny this year for any misleading information posted to their platforms meant to influence the election.

And Facebook has long been criticized for not fact-checking political ads or limiting how they can be targeted at small groups of people. 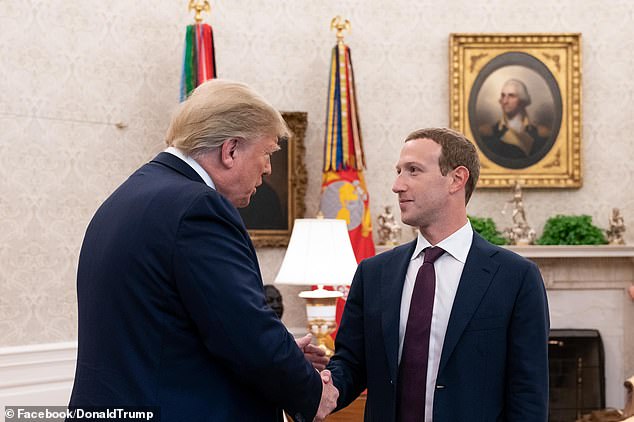 Zuckerberg has been to Washington D.C. to defend his company before lawmakers and has shown a reluctance to take down politically-related posts, defending them as free speech.

And he has faced heat from his own employees, who have been publicly critical of the company’s decision not to take down false information.

The social media companies were caught off guard in 2016 by attempts by Russia to interfere in the election.

Facebook has faced pressure to remove misleading political ads and doctored videos. But the company, in the past, has shown a reluctance to make such a move.

In August, Facebook removed a pro-Trump campaign ad because it contained false information about Biden – a rare take down of content.

President Trump has been critical of social media companies flagging or banning posts and accused the companies of being discriminatory to content from conservatives.