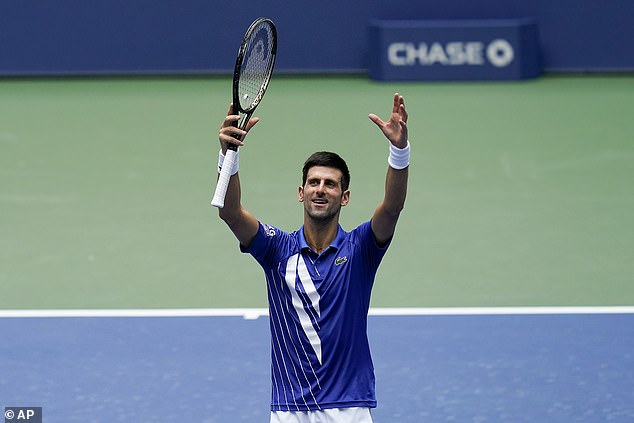 Kyle Edmund is a quiet man with a loud forehand, but he could not make it roar for long enough on Wednesday night to seriously disrupt Novak Djokovic at the US Open.

The British No 2 performed creditably enough, but failed to sustain his early charge against a man who has almost forgotten how to lose.

The world No 1 was given an initial scare but recovered enough of his form to win 6-7, 6-3, 6-4, 6-2 in three hours and 13 minutes to maintain what is looking like ominous form. 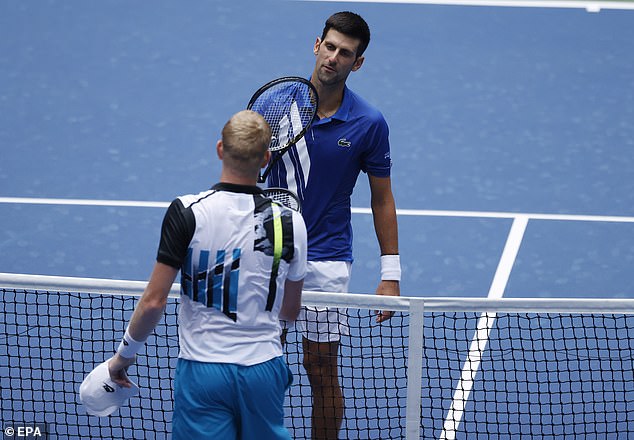 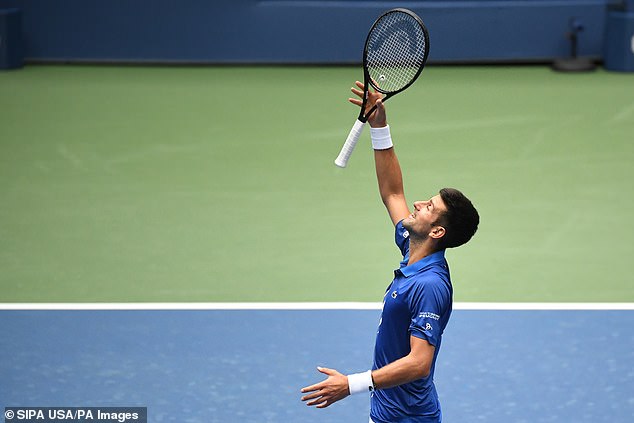 He paid Edmund the compliment of producing his best, at least for a time, after he went behind. The match followed a similar pattern to their meeting at Wimbledon two years ago, where the 25 year-old Yorkshireman got off to an excellent start before being made to pay heavily for a drop of intensity in the second set.

This inability to fully assert himself when having the advantage explains why Edmund has only won two of his matches out of his 26 against top-10 players, even those less accomplished than the brilliant Djokovic.

Given the weapons at his disposal, and the kind of quality he showed he possesses early on, that figure really ought to be higher.

Djokovic admitted that, not for the first time, Edmund had caused him anxiety: ‘It was anybody’s match for the first set and a half,’ he said. ‘Kyle played a fantastic first set, I didn’t do much wrong. His forehand is a weapon but his backhand was very strong, very flat.

‘I was pleased with my serve and how I recovered. That was a very good test for me today.’ 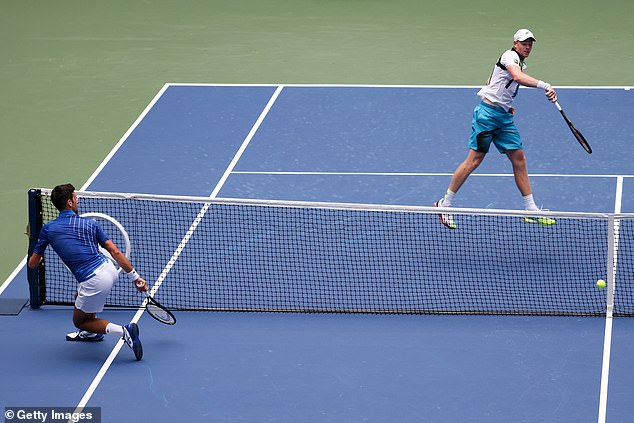 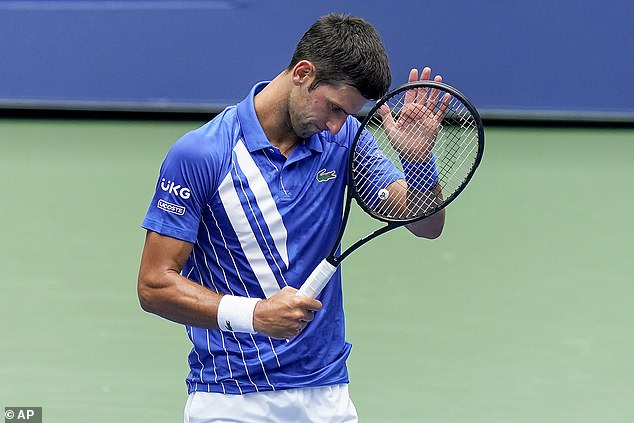 Edmund was the first of four British male players in second round action, the biggest UK representation since 1974. On Wednesday night Cam Norrie was due to take on Argentina’s Federico Coria to try and secure a place in the last 32.

Djokovic’s lockdown period was fairly interesting, to put it mildly. We have been treated to his views on vaccination and general health matters, and he was responsible for the well-documented disaster that was the Adria Tour exhibition series.

In the past 10 days he has managed to get his long-cherished vision of an independent players’ union-type organisation off the ground, although whether it flies remains to be seen.

For most players it would have caused the kind of distraction to throw them off their game, but not the multi-tasking Serb.

Watching on during the first set was Andy Murray, who is among the players who have been allocated their own personal hospitality box in the middle tier of the vast, empty Arthur Ashe Stadium.

The same level of heroics that Murray produced 24 hours earlier – and more – would be required if Edmund was to spring a seismic upset. 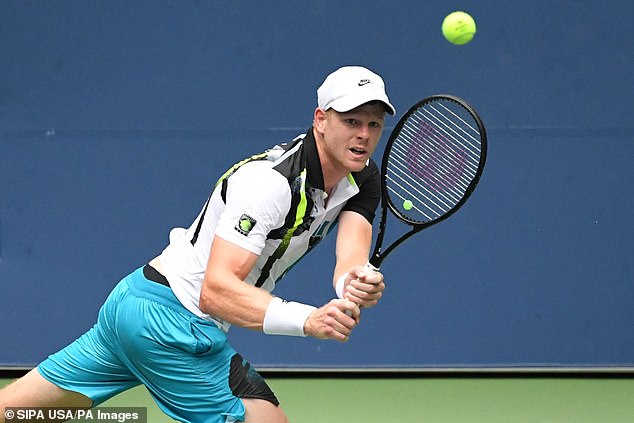 He was soon fending off three break points, but received early encouragement from the way that Djokovic repeatedly made his own life difficult by attempting backhand dropshots that either flopped into the net or stood up to be put away.

Yet the world No 1 knew he had to be fully engaged against an opponent who beat him three meetings ago, at the clay court Madrid Open in 2018.

Nobody is better equipped to soak up the power of Edmund’s sidewinder forehand than the elastic-limbed Serb, but even he struggled to contain the quality of blows coming at him from the opposite end of the court.

Edmund was good value for taking the match into a tiebreak and it was a victory of sorts when he took it 7-5, the first time in this truncated season that Djokovic has lost a tiebreak.

Given that record it would have been easy for the Yorkshireman to flinch when he served for it, but he stepped up and slammed an ace down the middle of the court.

That was the cue for Djokovic to properly dial in and show once again that he will brutally punish any let-up in intensity from the other end. Edmund threw in a poor game to be broken for 1-3 in the second, and it took only five minutes for the momentum of the match to be completely turned. 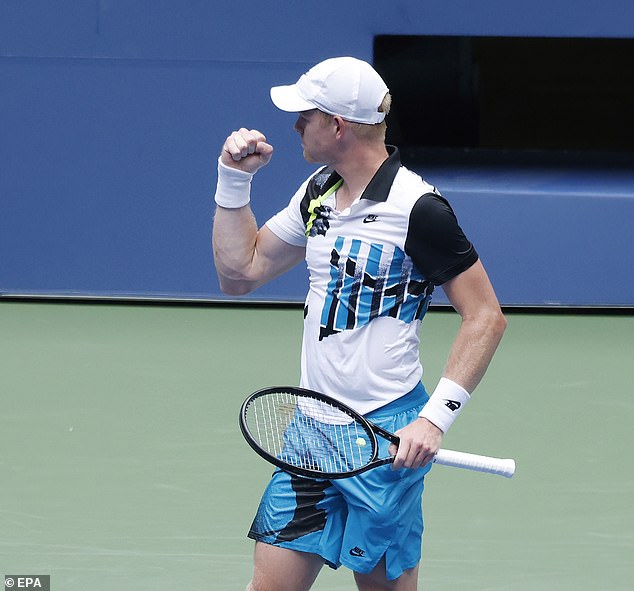 Something that has turned the Serb into the player who may well overtake Rafael Nadal and Roger Federer in the race for most Grand Slam titles has been the evolution of his serve.

The accuracy of his delivery in the second set as he focussed on his task meant that there was no way back into it for the British number two.

Djokovic stretched his lead in a lower quality third set in which both players minds seemed to wander at time. He appeared to get complacent once he had forged an early lead but Edmund could not take advantage.

These types of lapses are, perhaps, to be expected, given the funereal atmosphere around Flushing Meadows, which is never more stark than in its giant main stadium, where every howl of frustration echoes around the empty stands.

‘So much energy in here!’ he shouted sarcastically as he sped towards victory in the fourth set. 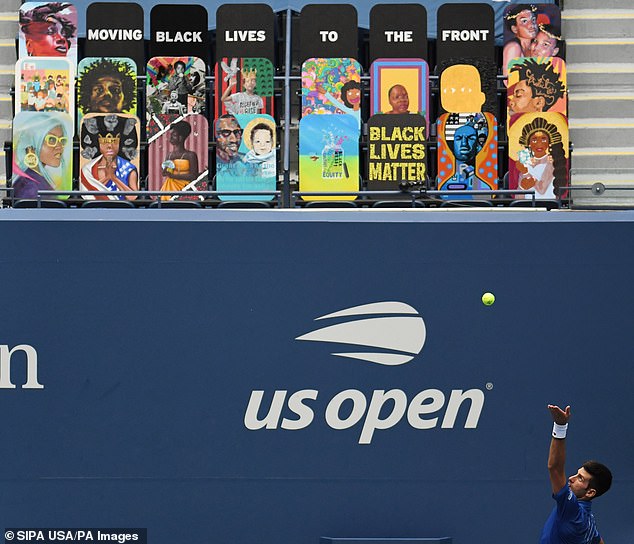