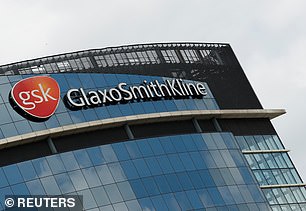 Drug companies GlaxoSmithKline (GSK) and Sanofi are joining the race to discover a Covid-19 vaccine and starting human clinical trials this week.

The pharmaceutical giants have enrolled more than 400 people for the phase one and two trial, which will assess the safety of the vaccine candidate.

The UK Government signed a deal with the companies in July for 60million doses — rumoured to cost £500million — in the hopes that it will prove to a success.

Results of the initial testing, across 11 sites in the US, are anticipated in early December, with the third phase beginning before 2020 is over.

The Department for Business, Energy and Industrial Strategy previously said the jab could be given to high-risk Britons as early as the first half of next year, if it passes trials.

GSK and Sanofi together have the largest vaccine manufacturing capability in the world, and believe their jab has the ‘potential to overcome the pandemic’ which has already killed 863,000 people.

The vaccine, one of 34 now in clinical trials, is based on the existing DNA-based technology used to produce Sanofi’s seasonal flu vaccine.

If all the vaccines pre-ordered by the UK are successful and go into production the country will have a massive stockpile of 340million jabs – enough to give every person in the country five each. 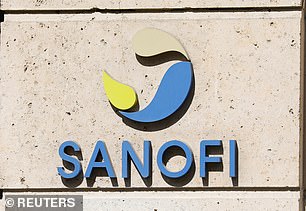 French drugmaker Sanofi and British peer GSK have enrolled more than 400 people in the US for the phase one and two trial, which will assess the safety of the vaccine candidate 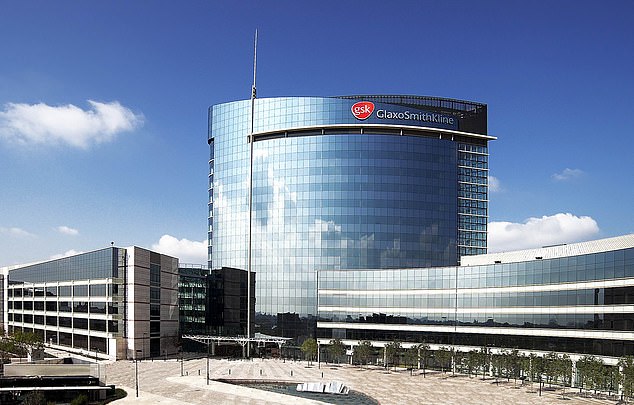 Roger Connor, president of GSK Vaccines (pictured: headquarters in London), said: ‘We believe that this adjuvanted vaccine candidate has the potential to play a significant role in overcoming the Covid-19 pandemic, both in the UK and around the world’

Roger Connor, president of GSK Vaccines said: ‘Moving this vaccine candidate into clinical development is an important moment in the progress towards addressing the global pandemic we are all facing.

‘This builds on the confidence shown by governments already in the potential of this protein-based adjuvanted vaccine candidate, which utilises established technology from both companies, and can be produced at scale by two of the leading vaccine manufacturers globally.

‘We now look forward to the data from the study, and if positive, beginning a phase three trial by the end of the year.’

Thomas Triomphe, executive vice president and global head of Sanofi Pasteur, said: ‘Sanofi and GSK bring proven science and technology to the fight against the global Covid-19 pandemic, with the shared objective of delivering a safe and effective vaccine.

‘The initiation of our clinical study is an important step and brings us closer to a potential vaccine which could help defeat Covid-19.

‘Our dedicated teams and partner continue to work around the clock as we aim to deliver the first results in early December.’

The first phase of the trial, on a small group of volunteers, is to make sure the vaccine is safe. Healthy subjects 18 to 49 years of age will be vaccinated to establish the correct dose for the vaccine.

The second part will assess the efficacy, making sure the vaccine actually produces an immune response in the body. It will involve older participants.

When trials move into the third phase, involving hundreds to thousands more people, scientists assess whether the vaccine actually prevents people from catching the coronavirus.

Oxford University is now going through the third phase of clinical trials. UK drug giant AstraZeneca, which owns the rights to the vaccine, said on September 1 it had enrolled 30,000 American volunteers to take part in its phase three clinical trial.

It now means 50,000 people worldwide are taking part in studies to see whether the jab – known as AZD1222 – can actually prevent people getting infected with Covid-19.

GSK and Sanofi’s vaccine works in a similar way to Oxford’s and both focus on recreating the viral spike found on the outside of the SARS-CoV-2 virus which infects human cells.

The ‘spike’ protein is what the virus uses to bind with cells in the body to invade them and has become the focus of scientific research.

The vaccines aim to prime the body’s immune system to bind to the protein and disable the virus before it takes hold in the body.

The difference between the two vaccines is how the spike is created.

Sanofi’s vaccine is based on its commercial and world-leading DNA Recombination technology which it initially developed for influenza vaccinations.

This jab has been combined with GSK’s adjuvanted technology which enhances the body’s immune response.

An adjuvant can reduce the amount of vaccine protein required per dose, which allows more vaccine doses to be made quicker.

The combination of a protein-based antigen together with an adjuvant is well-established and used in a number of vaccines, including for shingles and hepatitis B.

Oxford’s vaccine however, is based on a genetically tweaked version of the common cold virus that usually infects chimps.

The virus was weakened and its genetic material altered so it produced spikes which are identical to those of SARS-CoV-2.

Researchers hope their version will make the body recognise and develop an immune response to the spike protein – recognisable in images of the virus – that will help stop Covid-19 from entering human cells and therefore prevent infection. 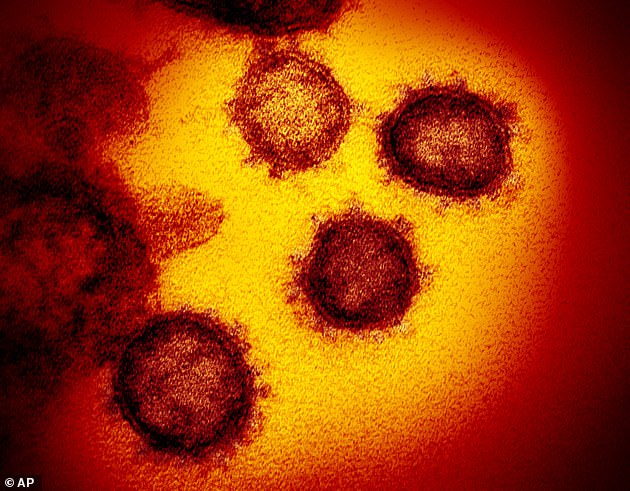 The ‘spike’ protein is what the virus uses to bind with cells in the body to invade them and has become the focus of scientific research. Pictured, the spikes are seen in an artist’s colorizations of images of the coronavirus taken with a high-powered electron microscope

Roger Connor, president of GSK Vaccines, said: ‘We believe that this adjuvanted vaccine candidate has the potential to play a significant role in overcoming the Covid-19 pandemic, both in the UK and around the world.’

The Government’s deal with GSK and Sanofi is among a string of agreements the British Government has made to get its hands on a vaccine.

Companies including Janssen Pharmaceuticals – which is owned by Johnson & Johnson – and Novavax, Pfizer, AstraZeneca and Valneva have all also received orders for their jabs.

Officials are taking a spread-betting approach ordering stacks of numerous types of jab in the hope that at least one of them will work.

Deals for a total 340million doses have so far been announced for the nation, which has a population of around 67million people.

It means the UK is set to get early access to six vaccines, which work in four different ways. Officials are hedging their bets because nobody knows which, if any, will ultimately be successful. It may even be necessary to give people more than one vaccine to get a strong immune response.

And it may be the case that if a vaccine cannot stop coronavirus from spreading, it could reduce the severity of a patient’s symptoms to prevent deaths.

Until clinical trial results appear, it is unclear whether people are likely to be given just the best-performing jab or a combination of different types.

WHICH VACCINES HAVE THE UK SECURED DEALS FOR?

If the vaccine proves successful, the UK could begin to vaccinate priority groups, such as frontline health and social care workers and those at increased risk from coronavirus, as early as the first half of next year, the Department for Business, Energy & Industrial Strategy (BEIS) said.

Human clinical studies of the vaccine will begin in September followed by a phase 3 study in December.

The vaccine is based on the existing technology used to produce Sanofi’s seasonal flu vaccine. Genetic material from the surface protein of the SARS-CoV-2 virus is inserted into insect cells – the basis of Sanofi’s influenza product – and then injected to provoke an immune response in a human patient.

AstraZeneca, which is working in partnership with Oxford University, is already manufacturing the experimental vaccine after a deal was struck on May 17.

Professor Sarah Gilbert, who is leading the Oxford team, is confident the jab could be ready for the most vulnerable people by the end of the year.

Her comments came after the results from the first phase, published in The Lancet on July 20, showed promise.

The team have genetically engineered a virus to look like the coronavirus – to have the same spike proteins on the outside – but be unable to cause any infection inside a person. This virus, weakened by genetic engineering, is a type of virus called an adenovirus, the same as those which cause common colds, that has been taken from chimpanzees.

US drug giant Pfizer – most famous for making Viagra – and German firm BioNTech were revealed to have secured a deal with the UK Government on July 20.

It reported positive results from the ongoing phase 2/3 clinical trial of one called BNT162b1 on July 1.  The company is still running phase 2 trials at the moment.

Pfizer’s vaccine is one called an mRNA vaccine, which do not directly inject bits of the virus into the body but send genetic material.

mRNA vaccines programme the body to produce parts of the virus itself by injecting the body with a molecule that tells disease-fighting cells what to build. The immune system then learns how to fight it.

The Government has given Valneva — whose vaccine is understood to be in the preclinical stages of development — an undisclosed amount of money to expand its factory in Livingston, Scotland.

While the Government revealed a 60million dose deal on July 20, the company said it had reached agreement in principle with the UK government to provide up to 100million doses.

Valneva’s jab is an inactivated whole virus vaccine, meaning it injects a damaged version of the coronavirus itself into the body.

The virus has been destroyed in a way that makes it unable to cause infection, but the body still recognises it as a dangerous intruder and therefore mounts an immune response which it can remember in case of a real Covid-19 infection.

The Government has agreed to buy 30million doses of a vaccine made by Janssen if it works.

Officials have agreed to help the company in its development of the jab by part-funding a global clinical trial. The first in-human trials of Janssen’s jab began in mid-July and are being done on adults over the age of 18 in the US and Belgium.

The jab is named Ad26.COV2-S, recombinant, and is a type of jab called a viral vector recombinant vaccine.

Proteins that appear on the outside of the coronavirus are reproduced in a lab and then injected into the body to stimulate an immune reaction.

The ‘Ad’ part of the vaccine’s name means it works using an adenovirus – a virus best known for causing the common cold – as a vehicle to transport the coronavirus genetics into the body.

Britain has ordered 60million doses of a vaccine being developed by the US-based company Novavax. It will help to fund late-stage clinical trials in the UK and also boost plans to manufacture the vaccine in Britain.

It produced an immune response in 100 per cent of people who received it, the company said, and was safe and ‘generally well-tolerated’.

Novavax’s candidate is also a recombinant vaccine and transports the spike proteins found on the outside of the coronavirus into the body in order to provoke the immune system.

Imperial College London scientists are working on Britain’s second home-grown hope for a jab. The candidate is slightly behind Oxford’s vaccine in terms of its progress through clinical trials, but is still a major player.

The UK Government is understood to have agreed to buy the vaccine if it works but details of a deal have not yet been publicised.

Imperial’s jab is currently in second-phase human trials after early tests showed it appeared to be safe.

Imperial College London will try to deliver genetic material (RNA) from the coronavirus which programs cells inside the patient’s body to recreate the spike proteins. It will transport the RNA inside liquid droplets injected into the bloodstream.