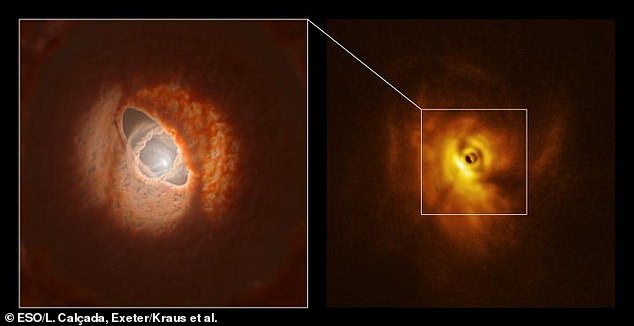 A strange young star system 1,200 light years from Earth was studied using powerful telescopes, but unlike Tatooine’s, this budding system has three stars.

Researchers at the University of Exeter tracked their ‘gravitational dance’ and found the forces are so great it tears apart and distorts the surrounding planet-forming dust cloud, which is normally shaped like a disc.

This means that the planets that will later form in this disc cloud will not be on a flat plane, as is seen in our own Solar System.

Instead, they will be at a variety of angles because the cloud that is currently birthing them is so severely warped.

Astronomers say that the view from one of these planets would be similar to the iconic Star Wars scene on Tatooine, but with one extra sun.

The new observations revealed that this object has a warped planet-forming disc with a misaligned ring. In particular, the SPHERE image (right panel) allowed astronomers to see, for the first time, the shadow that this ring casts on the rest of the disc 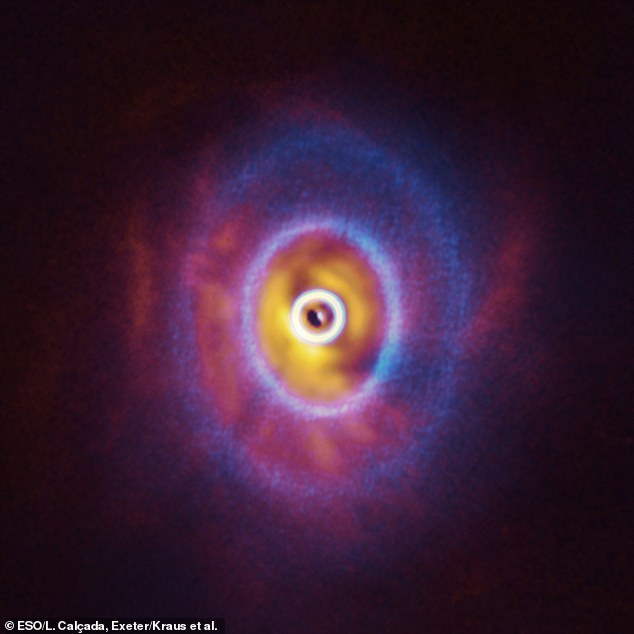 This stunning image is made of two seperate pieces of data. The blue rings come from ALMA while the fiery orange view comes from the SPHERE instrument

Researchers have long known that some planets exist in solar systems with more than one star, it is thought more than half of all star systems have at least two.

They have also been aware of how planets form in disc-shaped dust clouds for more than 200 years.

However, the 18th-century theory focused on single star, and did not account for the tangled gravitational field created by multiple stars, each orbiting one another.

As a result, this is the first study to look at how planets may form around multi-star systems.

The research into GW Orionis came out of a large programme focusing on young stellar systems and used a new way of tracking infrared radiation from six telescopes.

The instrument was specifically designed to give new insights into how star and planet formation occurs.

Stefan Kraus, professor of astrophysics at the University of Exeter, who led the research said this was the sharpest view yet of the intriguing system, thanks o the nifty tool, called MIRC-X.

‘Normally, planets form around a flat disc of swirling dust and gas– yet our images reveal an extreme case where the disc is not flat at all, he adds.

‘Instead it is warped and has a misaligned ring that has broken away from the disc.

‘The misaligned ring is located in the inner part of the disc, close to the three stars.

‘The effect is that the view of a potential planet within this ring looks remarkably like that of Tatooine, of Star Wars fame.’ 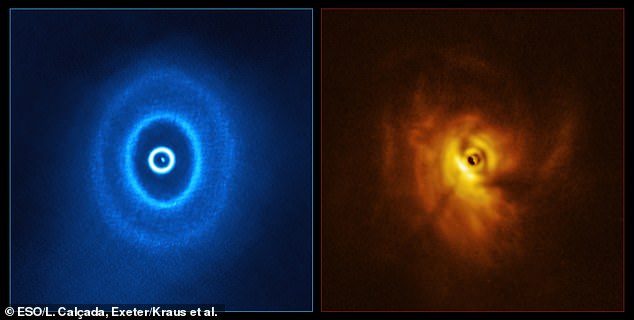 This image shows the two images of GW Orionis split apart, and not superimposed. On the right is the ALMA image while the right reveals the SPHERE view of the complex, multi-star system 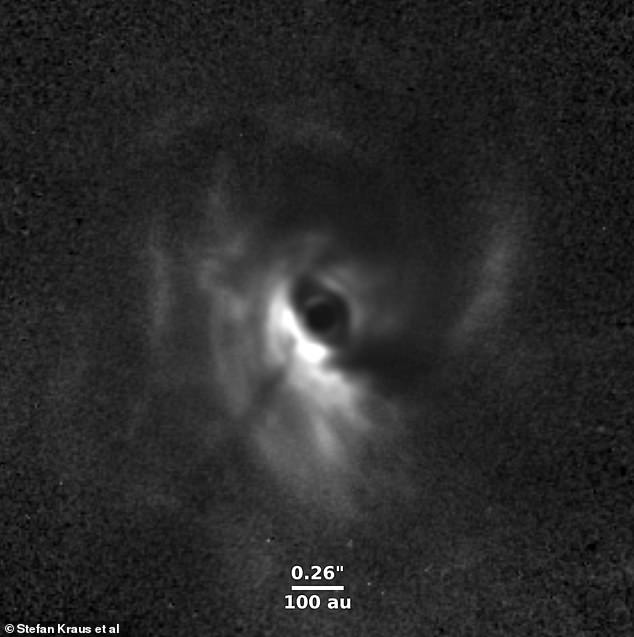 Scattered light image of GW Orionis. Standing on a potential planet inside the system named GW Orionis would give the observer a stunning view of a tilted, multiple star system, astronomers claim 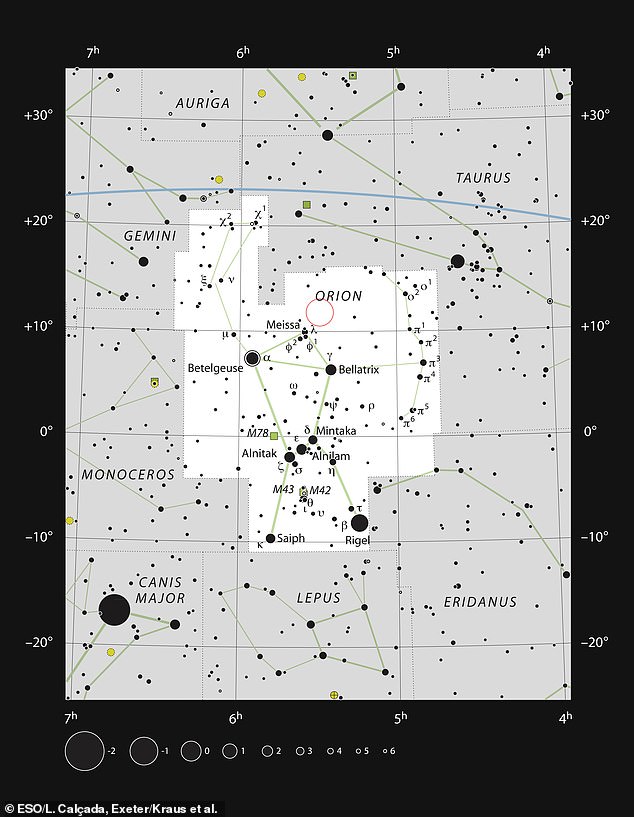 Pictured: the location of GW Orionis in the constellation of Orion as seen from Earth. The system is more than a 1,000 light years away

The only difference, except one is real and one is fictional, is that Tatooine had two stars, while GW Orionis consists of three.

Inside the system, the three stars behave in a unique way. Two of them orbit around one another, handcuffed together by their gravity at a distance of around 90 million miles, roughly the same as the space between Earth and our Sun.

As a pair, they fly around the centre of the system in an ellipse.

The third star is much further out and orbits the two intertwined stars once every 11 years from a distance of around 720 million miles, a similar distance as from the Sun to Jupiter.

It is the orbit of these stars which distorts the surrounding disc, and therefore, influences where planets are created.

However, while Luke Sykwalker is able to survive on his desert planet, the planets which may form inside GW Orionis would be far less hospitable as, according to the research, the worlds are approximately 46 times further away from their star as Earth is from the Sun, making them frozen and desolate. 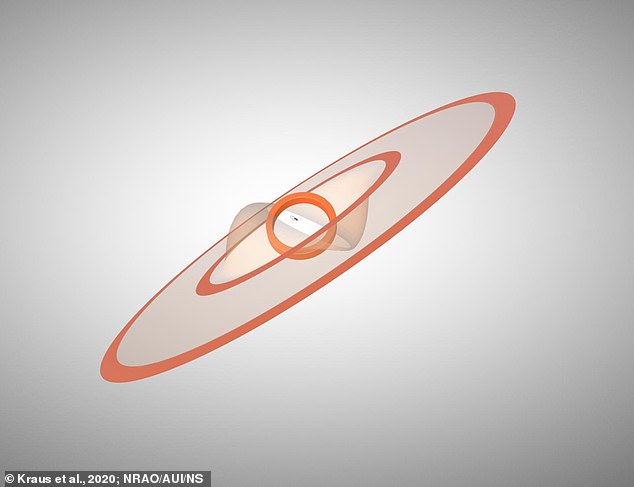 Orange rings are the (misaligned) rings seen by ALMA. The transparent surfaces correspond to the lower-density dust filaments that connect the rings and that dominate the emission in scattered light 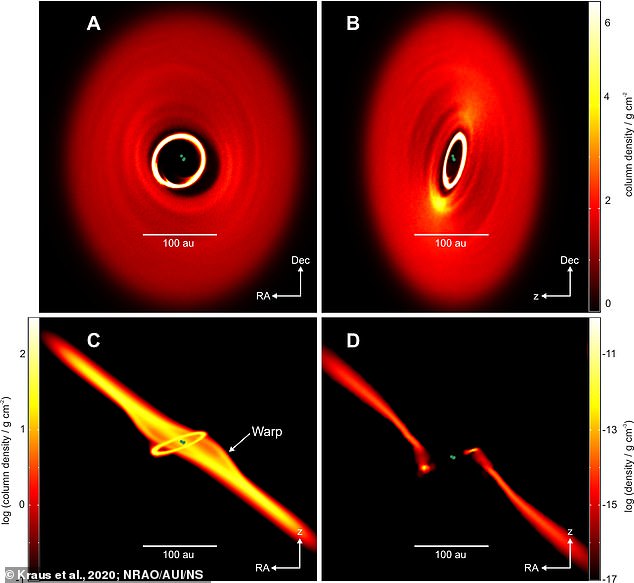 The research  team were able to image the inner ring and confirm its misalignment using the SPHERE instrument on VLT and observations from the ALMA telescopes.

The team observed shadows that this ring casts on the rest of the disc which helped them figure out the 3D shape of the rings and overall disc geometry.

Alexander Kreplin of the University of Exeter, said any planets that form within the misaligned ring will orbit the star on a highly oblique orbit.

‘We predict that many planets on oblique, wide-separation orbits will be discovered in future planet imaging surveys’ of this system, Kreplin said.

‘Since more than half of stars in the sky are born with one or more companions, this raises an exciting prospect: there could be an unknown population of exoplanets that orbit their stars on very inclined and distant orbits.’

To reach these conclusions, the team observed GW Orionis for over 11 years and mapped the orbit of the stars with unprecedented precision.

Alison Young, a member of the team from the Universities of Exeter and Leicester, said: ‘We found that the three stars do not orbit in the same plane, but their orbits are misaligned with respect to each other and with respect to the disc.’ 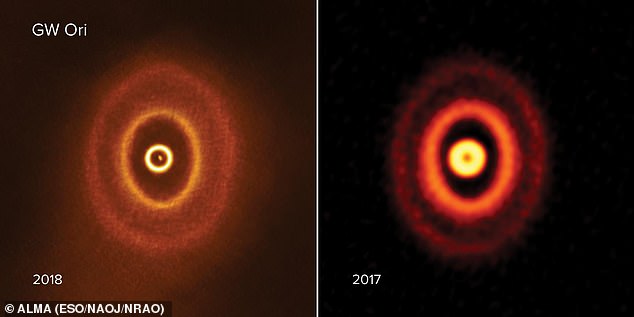 The international team, with researchers from the UK, Belgium, Chile, France and the US, then combined their exhaustive observations with computer simulations to understand what had happened to the system.

For the first time, they were able to clearly link the observed misalignments to the theoretical ‘disc-tearing effect’, which suggests that the conflicting gravitational pull of stars in different planes can warp and break their surrounding disc.

‘We conducted simulations that show that the misalignment in the orbits of the three stars could cause the disc around them to break into distinct rings. This is what we see in the observations’, said Matthew Bate, professor of theoretical astrophysics at Exeter, who carried out some of the computer simulations on the system.

‘The observed shape of the inner ring also matches predictions on how the disc would tear.’

The research was presented in the journal Science.

The European Southern Observatory (ESO) built the most powerful telescope ever made in the Atacama Desert of northern Chile.

It is called the Very Large Telescope (VLT) and is widely regarded as one of the most advanced optical instruments ever made.

It consists of four telescopes, whose main mirrors measures 27 feet (8.2 metres) in diameter.

The large telescopes are called Antu, Kueyen, Melipal and Yepun.

The European Southern observatory (ESO) built the most powerful telescope ever made in the Atacama Desert of northern Chile and called it the Very Large Telescope (VLT).

The first of the Unit Telescopes, ‘Antu’, went into routine scientific operations on April 1, 1999.

The telescopes can work together to form a giant ‘interferometer’.

This interferometer allows images to be filtered for any unnecessary obscuring objects and, as a result, astronomers can see details up to 25 times finer than with the individual telescopes.

It has been involved in spotting the first image of an extrasolar planet as well as tracking individual stars moving around the supermassive black hole at the centre of the Milky Way.

It also observed the afterglow of the furthest known Gamma Ray Burst,