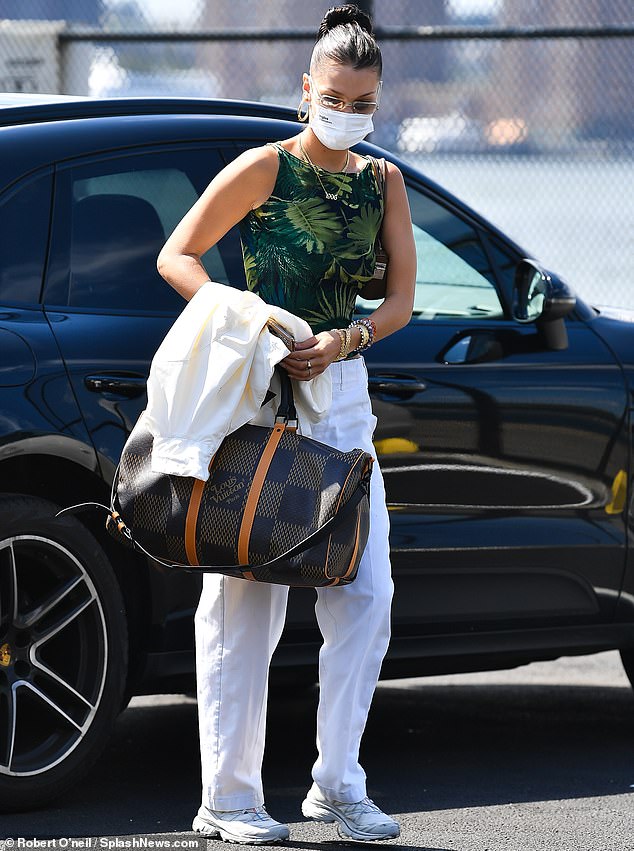 Bella Hadid is getting out of town just weeks before she is due to become an aunt.

On Friday, the 23-year-old stunner was spotted leaving her apartment in NYC as she headed to the heliport to take off for the holiday weekend.

The in-demand model who has been back to work in the city on various modeling projects seemed excited to be kissing the end of summer goodbye as she departed in style.

All White: Bella Hadid, 23, leaves her NYC apartment as the model heads to a local heliport to embark on a weekend getaway. The brunette stunner wore her summer whites as she left town with her designer duffle bag in tow

Making sure to get all her white in before Labor Day, the model wore baggy white pants and a plant printed blue and green tank, as she carried a matching white jacket and a rocked a fresh pair of white sneakers.

As she arrived at the heliport the model was seen grasping her Louis Vuitton duffle before making a quick escape.

Showing a hint of midriff the beauty strutted to her ride as she carried a small brown shoulder bag.

She had on a pair of lightly tinted statement sunglasses and a white face mask as Bella adorned her outfit with ornate gold jewelry and a pair of classic hoops. 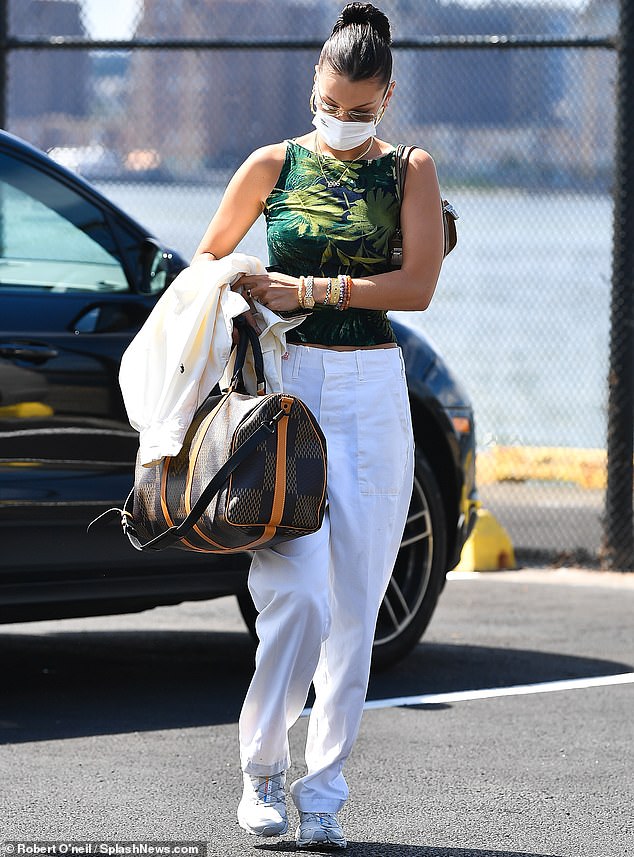 Quick trip: Bella appeared to only have a small carry-on bag with her as she prepared to head out for the weekend getaway but made sure to do so in style as she walked to her luxurious ride 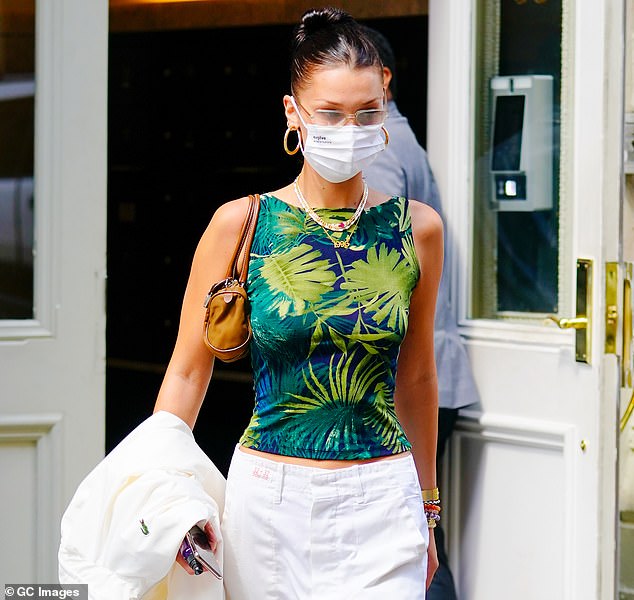 Tanned: Bella showed off her enviable tan and toned arms, exposing a hit of her flat midriff as she sauntered

Leafy accents: The model sported a tropical looking top that popped against her full white ensemble as she prepared to have a relaxing weekend away 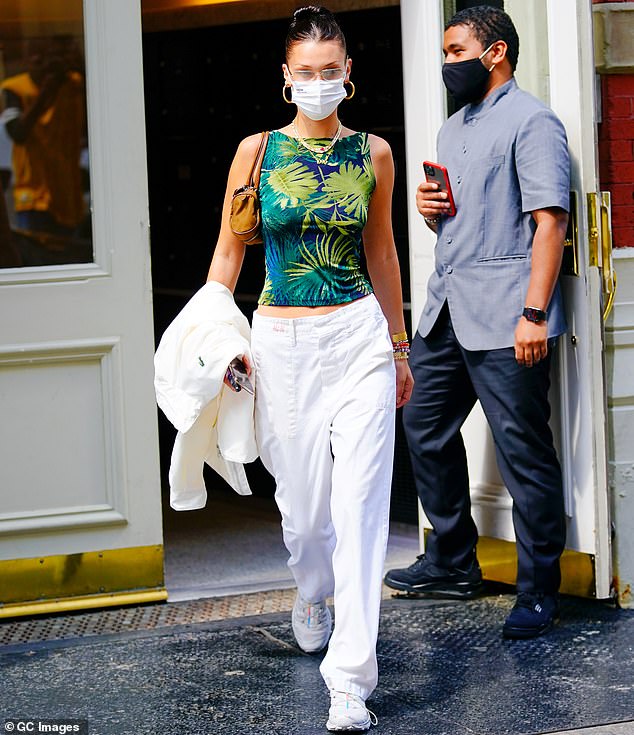 Jet-set: Bella made sure to travel safely as she had what appeared to be a spray bottle of hand sanitizer with her for the journey 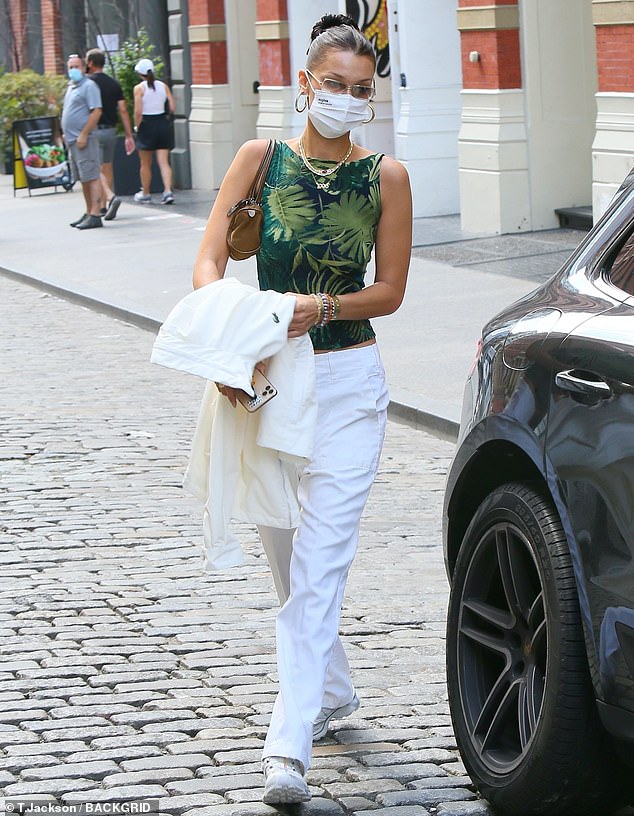 Weekend away: Bella looked at ease as she went from one luxury ride to another, jumping in the back of a Porsche SUV as she rode in style to the heliport

Bella made sure to travel safely as she had what appeared to be a spray bottle of hand sanitizer with her for the journey.

The brunette kept her hair slicked back in a high bun as she made her way out of the city, looking effortlessly cool while doing so.

The international model has long been a fan of the glossy updo which helps to showcase her perfectly chiseled face.

After embarking on her weekend retreat Bella posted some cheeky selfies to Instagram that set pulses racing. 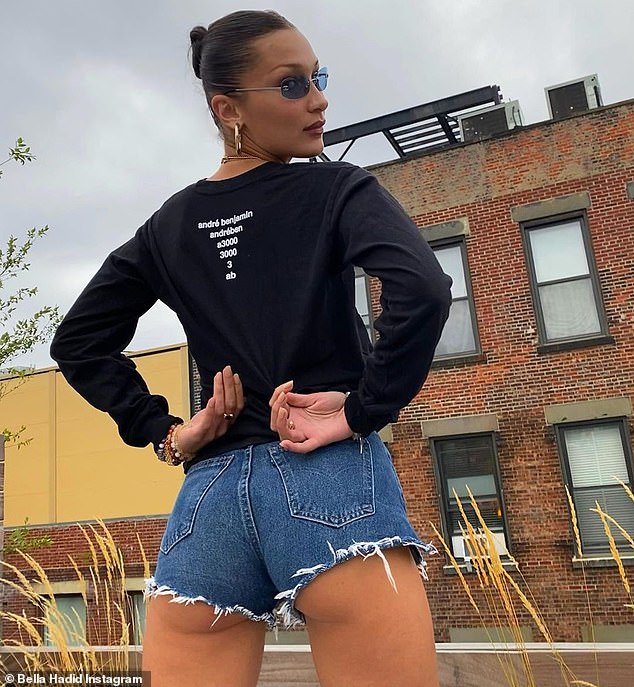 Look back at it: Bella bared her pert behind on Instagram for her 32.7M followers as she coyly looked back at the camera 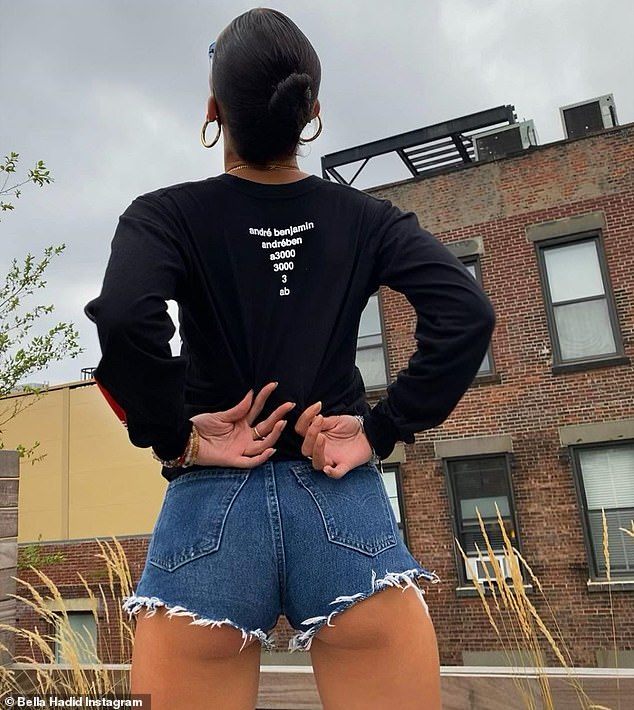 Cheeky: The slender supermodel posted an NYC rooftop snap as she departed via Helicopter for the long weekend

The slender five-foot-nine stunner bared it all as she showcased her incredible legs in a pair of tiny jean shorts and an Andre3000 sweatshirt, showing off for her 32.7M Instagram followers.

Though leaving for a short trip, Bella has been overjoyed at being back to work in the city amid the pandemic.

The model recently landed the Vogue Italia September cover alongside many other notable models like Emily Ratajkowski.

The 100 covers edition of the reputable magazine seeks to showcase celebrities and ordinary people of all ages, ethnicities and shapes who all have a story to share. 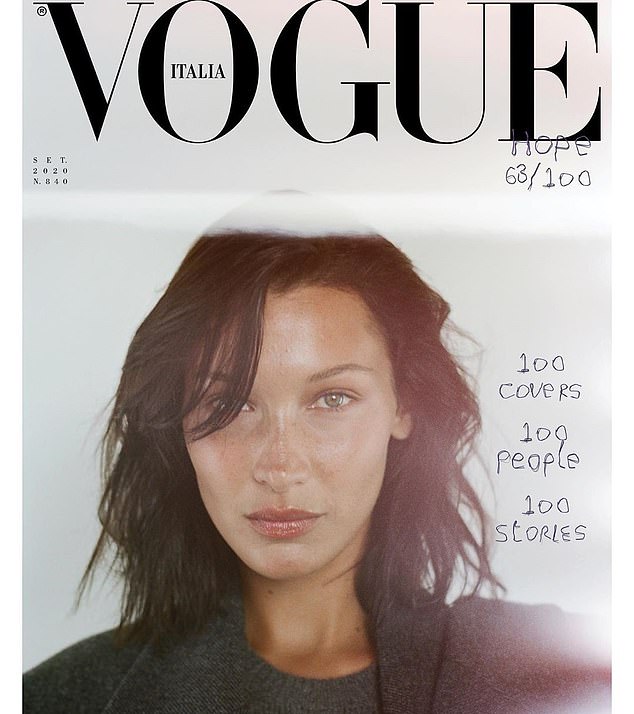 100 Covers: The 100 covers edition of the reputable magazine seeks to showcase celebrities and ordinary people of all ages, ethnicities and shapes who all have a story to share.

She also posted some snaps from her Burberry campaign that was shot right before lockdown. The model is the face of their pocket bag as she posed with a panther statue for the shoot.

‘This is my second campaign for Burberry and it is always such an exciting experience working with Riccardo – he has such amazing creative ideas and ways of interpreting a collection,’ the stunner shared.

The busy beauty has also been using her social media for immense good, telling her fans to vote and encouraging them to donate to many of the important social causes plaguing the United States and the world. VOTE: The famous model has done a world of good on her Instagram story since quarantine hit encouraging her large social media following to vote and to donate and educate themselves on important social causes plaguing the US and the world

Last week Bella made her virtual VMA’s appearance as she presented Lady Gaga with the first MTV Trichon Award.

The media buzzed as news dropped that she had run into her on and off ex-boyfriend The Weeknd – whose real name is Abel Tesfaye – at a rehearsal before the show.

Though the two have had a rocky relationship, the pair reportedly did not have an awkward run in. A source revealed, ‘They played it cool and crossed paths with each other, same place, same time’ but appear to be on ‘good terms.’

Having spent the majority of quarantine on her mother Yolanda Hadid’s Pennsylvania farm, it seems the model intends to stay in the city for fall as work slowly picks up again. 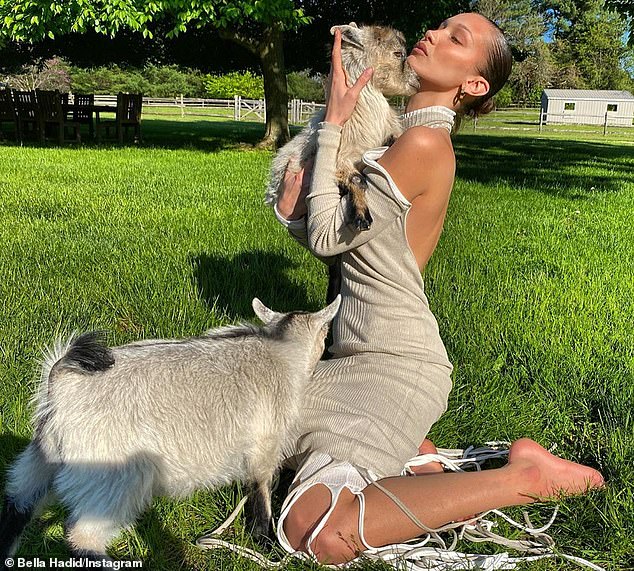 Animal lover: Bella Hadid poses with baby goats on her mother Yolanda’s farm in Pennsylvania. She spent the majority of her quarantine with her sister Gigi and her baby-daddy Zayn