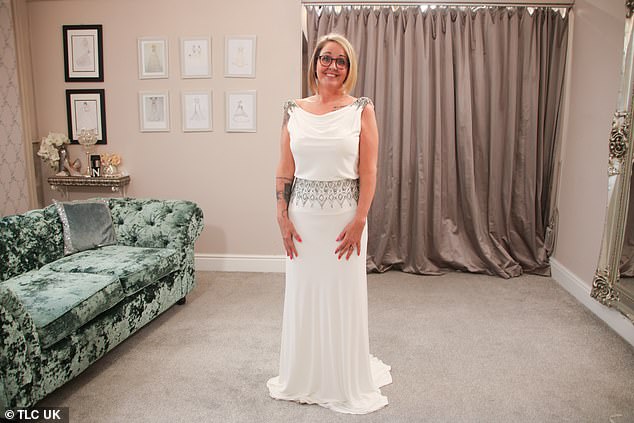 A priest’s feisty mother told her daughter she ‘couldn’t afford to put any weight on’ as she tried on a very clingy gown in Say Yes To The Dress Lancashire.

In tonight’s episode of the TLC show, priest Gemma, who usually conducts other people’s weddings, is about to become the bride – and she’s looking for the dress of her dreams.

However, her opinionated mum, Sue leaves Gok gobsmacked when she slams the first dress the bride-to-be tries on because it shows her ‘pubic bone.’

‘It’s so clingy that you really do need to make sure that you stay like you are at the moment, you can’t afford to put any weight on with that dress,’ she says.

In tonight’s episode of Say Yes To The Dress Lancashire, priest Gemma is in for a shock when her mother Sue makes a ‘brutal’ comment about one of the gowns she tries on. Pictured, in dress one 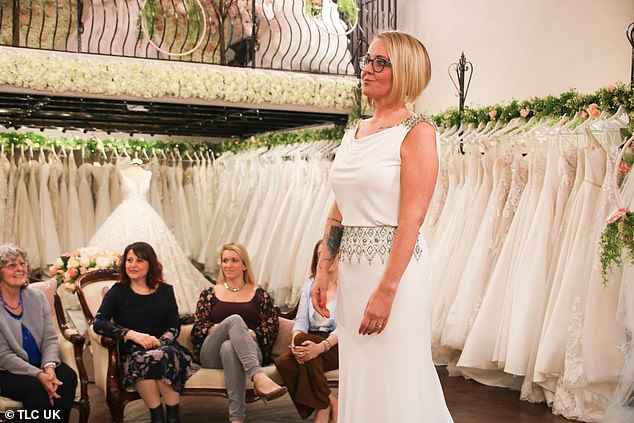 The bride-to-be is delighted when she tries on the 1930s inspired drop-jersey dress. Pictured, with her entourage and mother, far left

Unlike your typical priest, the bride-to-be has a confident, quirky sense of style that she wants to bring out on her big day.

‘I’m really used to being dressed head to toe in black, but I want to reconnect with the girl beneath the collar,’ she explains.

And who better to bring out Gemma’s vibrant personality than super stylist Gok Wan?

‘There’s actually nothing traditional about you, is there?’ Gok asks, as Gemma describes the vision she has in her head. 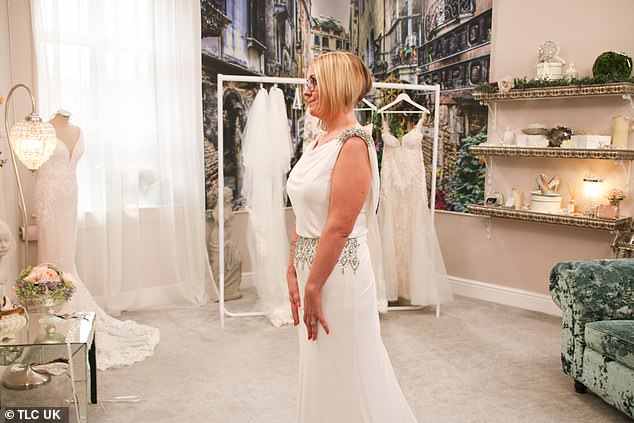 Unlike your typical priest, the bride-to-be has a confident, quirky sense of style that she wants to bring out on her big day. Pictured, in dress one 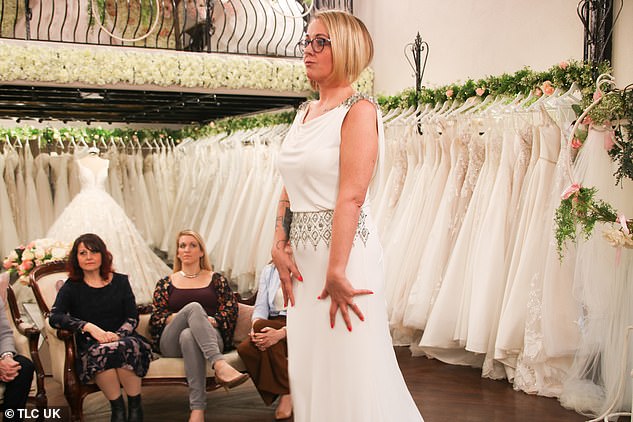 ‘I want smooth, I don’t want hoops or like loads of faff, and number one, I want pockets,’ Gemma adds. ‘And I want to be able to jump in the pool in it at the end of the day!’

Whisking the bride-to-be off to the changing room, Gok pops her into a gown that caught her eye the moment she walked into the boutique: a 1930s inspired drop-jersey dress.

Once in it, Gemma’s already close to saying yes, even before she’s shown her entourage.

‘I feel like an A-list celebrity on the red carpet at the Oscars,’ she smiles. ‘The more I wear it the more I maybe want to say yes!’

Despite radiating confidence, Gemma’s biggest concern is winning over her super-opinionated mum.

‘I really want to know what my mum thinks,’ she says. ‘My sister will love me in anything but my mum’s the tough customer!’

Walking downstairs in front of her entourage, the bride-to-be is initially met with smiles and gasps of astonishment, with Claire, her sister, gushing: ‘I love it, I love the back on it and the shape, and it looks stunning on you.’

But just as Gemma predicted, and without mincing her words, Sue takes issues with the gown’s fit immediately and brands it ‘clingy.’

‘She is abiding by the over 70 rule in that when you get to 70 you can say what you want!’ Gemma’s friend Jessica replies.

With her head in her hands, the bride-to-be takes in her mum’s feedback and laughs: ‘My mum is brutal. She was properly horrible about it!’ 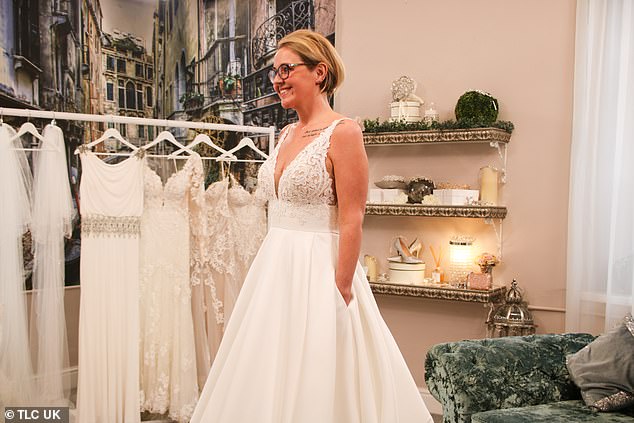 While the entourage fall in love with dress number two (pictured), Gemma bluntly says she ‘hates it’ 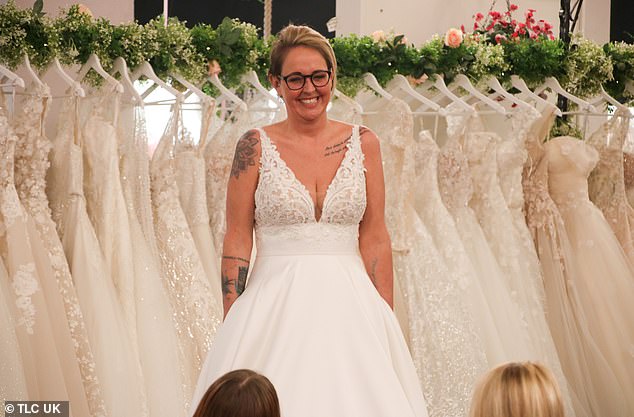 Making light of Sue’s comments, Gok steps in and says: ‘You look beautiful, and if you want to go and eat a couple of takeaways then I won’t tell mum.’

Thinking that Gemma should park the Hollywood glam look for now, the super stylist suggests something a bit more bridal: a beautiful, detailed gown with a plunging neckline. But Sue’s not done yet.

As Gok shifts the bride-to-be back upstairs, Sue leans over to the rest of the entourage, and whispers: ‘You can see her pubic bone! It wasn’t her stomach that was the issue!’

Back upstairs, Gemma slips into dress number two, but looking at herself in the mirror, it’s clear that she has some reservations.

‘It’s something else, I think it looks good but it’s so outside of my comfort zone,’ she says to Gok. ‘I don’t know yet, I need to wear it a bit longer.’

Agreeing to show her entourage, Gemma makes her way downstairs, and this time round Sue is lost for words.

‘I’ve got no words, it’s beautiful’ she says, as the rest of the entourage gush over how stunning Gemma looks in the gown. But this time it’s the bride-to-be who isn’t mincing her words, as she reveals her true opinion of the dress. 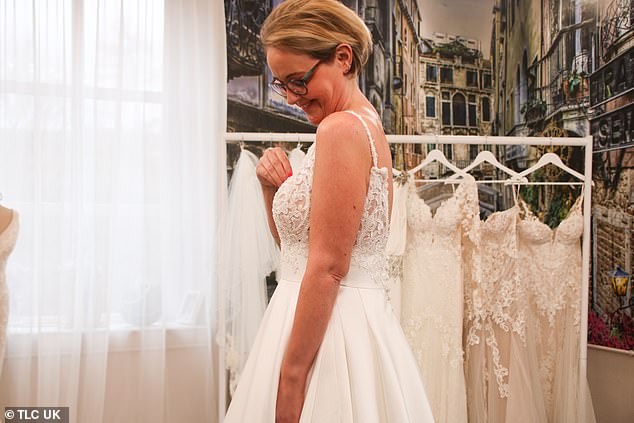 When Gemma slips into dress number two (pictured), it’s clear that she has some reservations

Jokingly, Gok turns to Gemma, chuckling and says: ‘Do you know what, Gemma, don’t sit on the fence here love, say what you think!’

With the disaster of dress two behind them, the super stylist think he’s found something that the priest will fall in love with, and one with the attitude she’s looking for.

Dishing up his own slice of divine intervention, Gok presents Gemma with a strapless gown with baroque lace detail on the front.

Looking like he’s onto a winner, the priest is instantly taken aback by the dress.

‘I totally knew, the moment that I opened my eyes. I just knew,’ she says emotionally. ‘I feel cool and sexy, but also cute and beautiful!’

And for the first time all day, Gemma and her entourage are singing from the same hymn sheet, even mum Sue, who’s smiling from ear to ear!

Third times the charm for Gemma, who gleefully says yes to the dress!