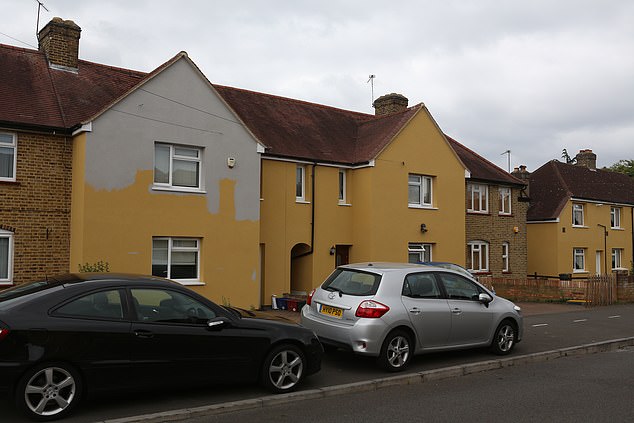 A council has been labelled a ‘bully’ after telling furious residents that repainting their houses the colour of ‘baby poo’ will help save the planet, and threatening a widow who tried to paint over the colour with a £1,600 fine.

Hounslow Council claims that by painting the houses the colour reminiscent of a baby’s nappy, residents were actually saving more than £300 a year through energy efficiencies and making their homes more climate friendly.

However, residents of the Worple Estate in Isleworth, West London, have hit back at the council, calling them ‘bullies’ and saying they have ‘destroyed’ their homes by paining them the ‘chicken korma’ colour in May.

Clare Easton, who lives in one of the newly painted homes, said to the BBC: ‘When I first saw it, it just reminded me of a baby’s nappy, baby’s poo.’

One resident – a widow who has lived on the estate for 28 years – was allegedly hit with a £1,600 fine after she tried to paint over the colour with a more agreeable grey, saying that to do so risks ‘invalidating the Council’s warranty’ on external insulation that was also installed.

Hounslow Council has been labelled a ‘bully’ after painting council houses the colour of ‘baby poo’, and slapping a widow with a £1,600 fine for trying to paint over the colour 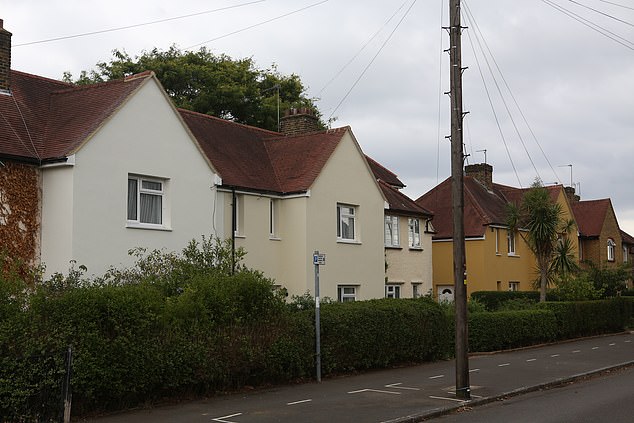 The council claims that painting the houses in the ‘chicken korma’ colour is part of a scheme to make the houses for energy efficient, but it has angered the local residents

The council said that coating the houses’ newly installed cladding in the ‘baby poo’ paint is all part of its scheme the help make reductions in the estate’s carbon emissions.

Hounslow also claims that tenants of the estate were consulted over the colour before painting began, with a pilot scheme referencing a ‘magnolia colour (or similar)’, but the planning process said the colour was switched to ‘sand yellow’.

The homes on the estate are made up of both privately owned houses and council properties, with residents being told by letter three years ago that the decorating would be completed in the spring of this year.

Only the council owned houses have been painted in the yellow, with one critic noting that it makes it clear who owns their home, and who doesn’t.

Cllr Lily Bath, deputy leader of Hounslow Council, said in a statement: ‘Hounslow Council has now implemented a range of measures to improve energy efficiency in our housing.

‘One such measure is external wall insulation on properties in the Worple Estate, which is home to mixture of Council social housing and privately-owned properties. 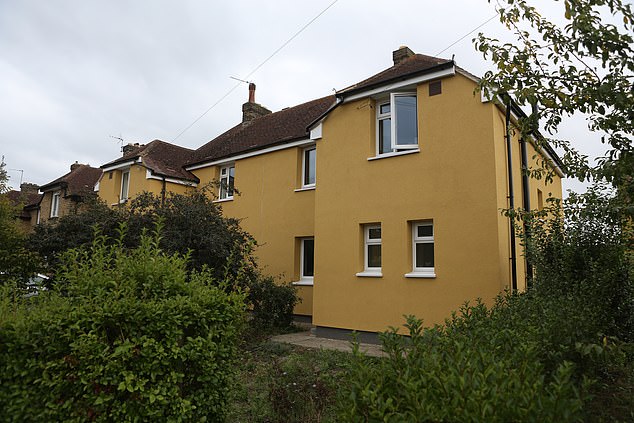 ‘Council tenants had relayed concerns about the condition of some properties, particularly regarding damp and heating costs and the Council embarked on an external wall insulation project for each of its 84 properties.

‘When the external wall insulation had been installed, new paint work was required on the properties.

‘The vast majority of tenants where works have been carried out are very satisfied with the quality of the works, the colour and the energy and costs they are now saving.

‘Savings per property are estimated at £308 a year and there’s also a large reduction in carbon emissions.

‘The reason why residents should not paint over the original colour is because it risks invalidating the Council’s warranty on the external wall insulation and is in breach of planning regulations and their tenancy agreement.’

She added that there is no evidence that the colour has had a ‘negative impact’ on house prices in the area. 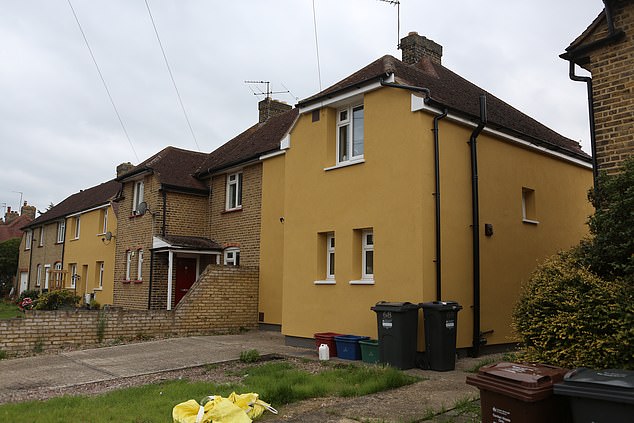 One critic noted that by painting the council houses with the new colour, the council was making it clear who owned their house and who didn’t 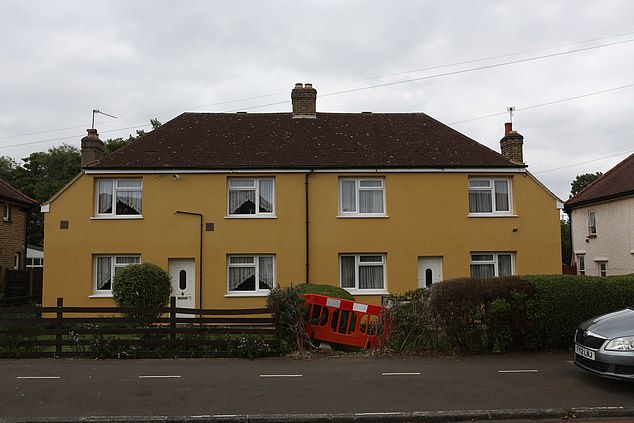 The council said in a statement that residents were consulted over the colour, which was set to be ‘magnolia’, but at some point the decision was made to use a ‘sand yellow’ instead

But one family on the estate has hit back at the council for trying to ‘intimidate’ them after a widow was allegedly given a fine of £1,600 for trying to paint over the new colour given to her home.

Ahead of a family wedding planned for later in the year, she decided she could not stand the ‘sand yellow’ and began painting over it in a more neutral shade of grey.

Within in an hour, the council had been tipped off by contractors working in the area, and council workers contacted the widow – who chose to remain anonymous when speaking about her ordeal – to say she must pay to repair the ‘damages’.

In addition to the fine, her house is now stuck in limbo – with half the house painted grey, and the other still in the yellow.

Her daughter said that the family has no intention of paying the hefty fine, saying she had found an independent contractor who could do the ‘repairs’ for just £150, a fraction of the fine issued. 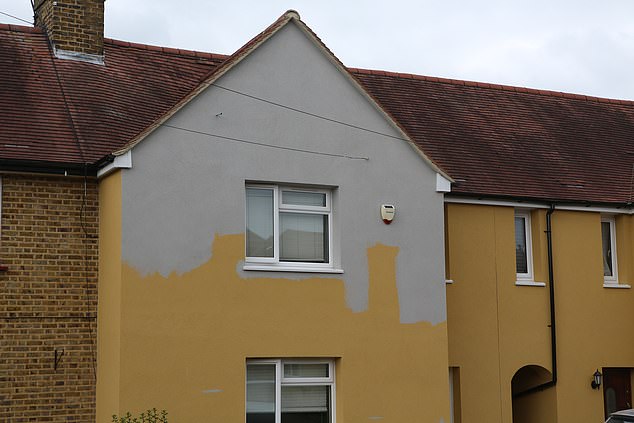 The widow, who has lived in her home on the estate for 28 years, tried to paint over the ‘baby poo’ yellow with a more neutral grey ahead of a family wedding, was the council instantly demanded that she stopped, and slapped her with a £1,600 fine for ‘damages’

She added that her mother is now worried that she could face eviction, despite living in the house for 28 years and looking after it well, and that it felt like the council is ‘trying to shame [residents of the council houses]’ with the colour.

Another local, Amanda Dickinson, 63, compared the colour to that of ‘chicken korma’, and said the new paint jobs are bad for the community as it divides those who own their homes and who rents them.

She told the Sun: ‘I think it’s really divisive and counter-productive to cohesive living – if you want to put it in ‘council speak’, and added that she would have objected if had known what colour the houses were going to be painted.

Former Labour councillor in Hounslow Vanessa Smith, who also lives on the estate, accused the council of acting like ‘bullies’, and failed to communicate with the community because ‘they’re only council tennants’.

She said: ‘These are people’s homes and people take pride in their homes and they deserve to be spoken to,’ adding that she ”really can’t see why they have to have these colours imposed on them’.