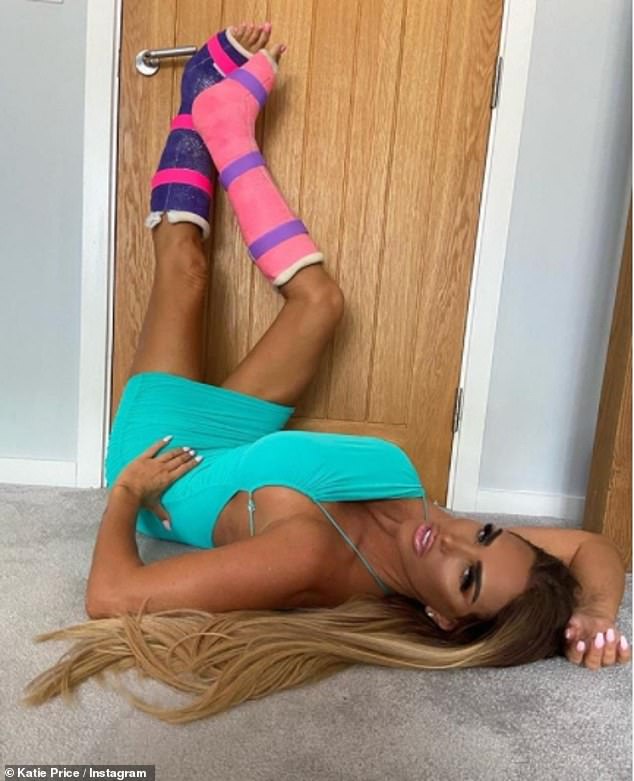 Katie Price has revealed that doctors told her she is ‘lucky’ to be alive and said she ‘could have been paralysed’ after breaking her ankles and feet in a horror accident.

The former glamour model, 42, said it felt like ‘non-stop electric shocks’ when she plummeted 25ft off a wall at a theme park in Turkey and landed on her feet.

Katie explained how her feet are ‘destroyed’ following the incident where she has returned to The Priory and will have to learn to ‘walk again’.

Survivor: Katie Price, 42, has revealed that doctors told her she is ‘lucky’ to be alive and said she ‘could have been paralysed’ after breaking her ankles and feet in a horror accident

Katie, who was on holiday with her boyfriend Carl Woods, 31, and her children Princess , 13, and Junior, 15, at the time, said doctors told her they have amputated legs with injuries similar to hers.

Speaking to The Sun, she said: ‘The doctors said I’m lucky I’m not dead.

‘I could have hit my head and I could have been paralysed, I am actually lucky I landed on my feet.’ 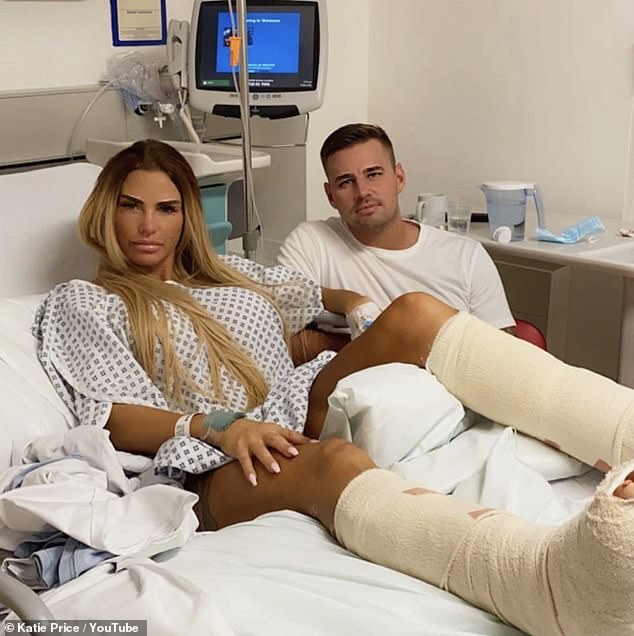 Couple: Katie, who was on holiday with her boyfriend Carl Woods, 31 (pictured), and her children Princess , 13, and Junior, 15, at the time, said doctors told her they have amputated legs with injuries similar to hers

She added: ‘I thought, ‘I’m never going to walk again’. The doctors said they’ve cut off legs before after seeing injuries like mine.’

Katie underwent an eight-hour operation to rebuild her feet after she was ‘mucking about’ following a few drinks and jumped off what she thought was a ‘small wall’ at the Land of Legends theme park.

The model revealed how she has returned to The Priory because her ‘mental health’ has been ‘badly affected’ by her injuries. 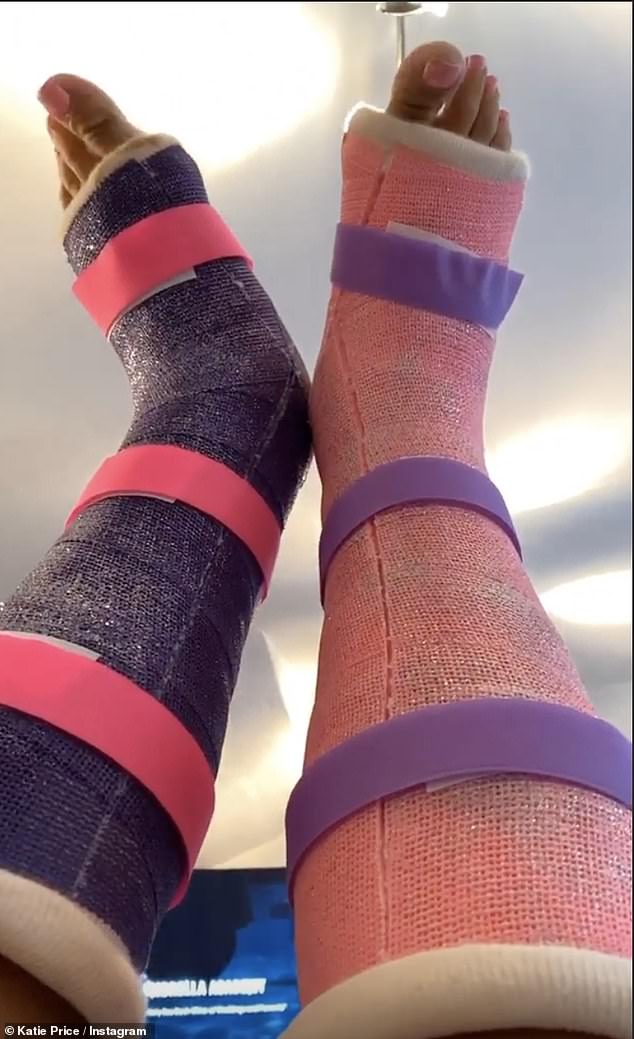 Legs akimbo! Katie broke both her feet while on a family trip to Turkey after jumping off a 25ft wall

Katie last visited The Priory in September 2018 and spent 28 days in the facility after her family urged her to seek help following wild partying antics in Mallorca.

It comes as the star revealed how ‘everything’ has hit her ‘so hard’ and she feels ‘humiliated’ at the prospect of having to learn to ‘walk again’.

She spoke of how everyday tasks are ‘impossible’ including going to the toilet, cooking, reaching for the cupboards and taking a bath where she could ‘drown’.

Katie, who is also mother to Harvey, 18, Jett, seven, and Bunny, six, explained how she is ’embarrassed’ of having to be pushed around and told how people treat her ‘differently’.

She explained how she ‘feels sorry’ for boyfriend Carl who has doted on her since the accident and said that it is ‘demoralising’ seeing him push her in the wheelchair. 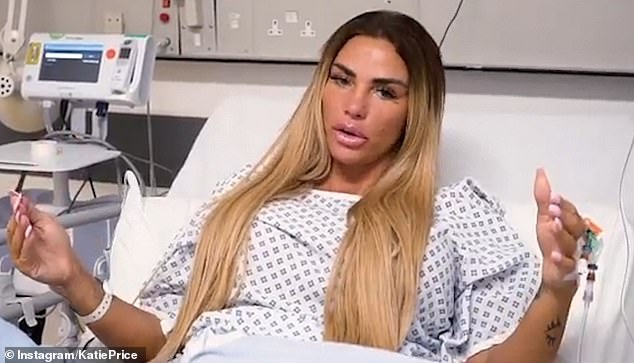 Take a break: The-mother-of-five announced that she is following her doctor’s orders and taking some time out to heal from her horrendous foot injuries

But the CBB star described how she would be ‘lost’ without her beau and revealed how she can still ‘keep Carl happy in the bedroom’ with him having ‘no complaints’.

However Katie also vowed that she is ‘never drinking again’ following the traumatising accident and plans to cover up her ‘mangled’ feet with tattoos.

It comes as Katie recently revealed she was stepping out of the spotlight on Thursday on medical advice as she has been told to ‘rest in order to heal’. 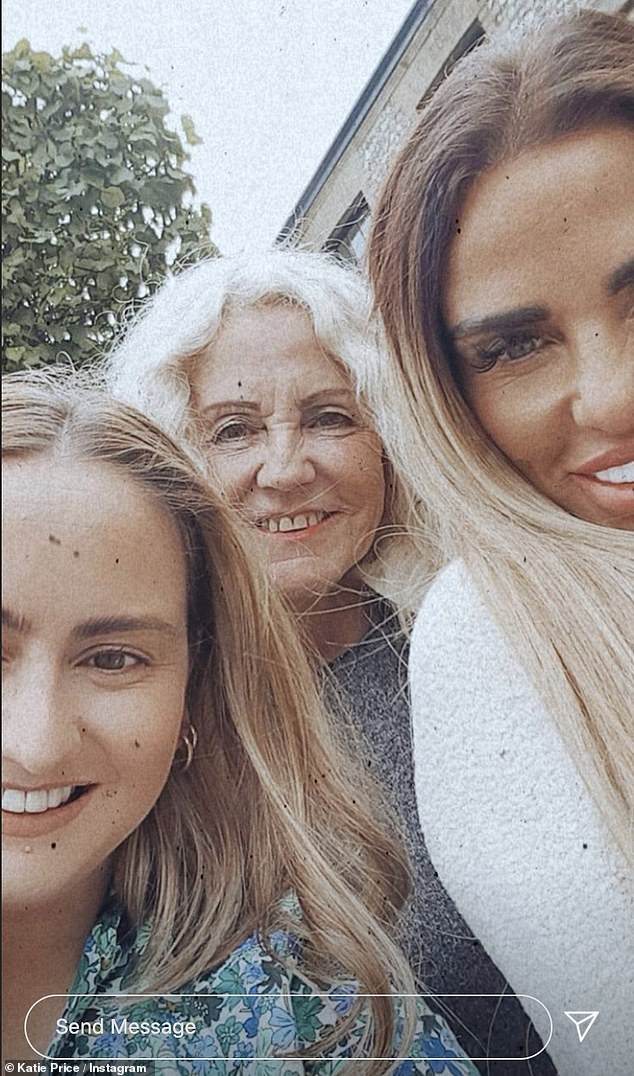 Family matter: Katie took some time out with her mother Amy, 68, and sister, Sophie, 30 last month as she recovers

Amid the social media hiatus, Katie appeared in a promotional fake tan video shared on her Instagram on Sunday evening – with her representatives confirming this was a pre-scheduled post.

They said: ‘I can confirm that Katie has not returned to social media.  Katie’s team posted the Instagram and this was not posted by Katie herself.

‘It was filmed prior to her hiatus.’

The star posted a statement to Instagram Stories last month which read: ‘Katie is taking some time out of the media spotlight.

‘Her family and Dr’s have told Katie that she must rest in order to heal. Katie wants to thank everyone for their ongoing support and will be back when she feels ready.’

Katie’s representative told MailOnline: ‘Katie is taking a much needed break. Katie has found the past few weeks terribly draining, both mentally and physically challenging and in order to bounce back is convalescing.’ 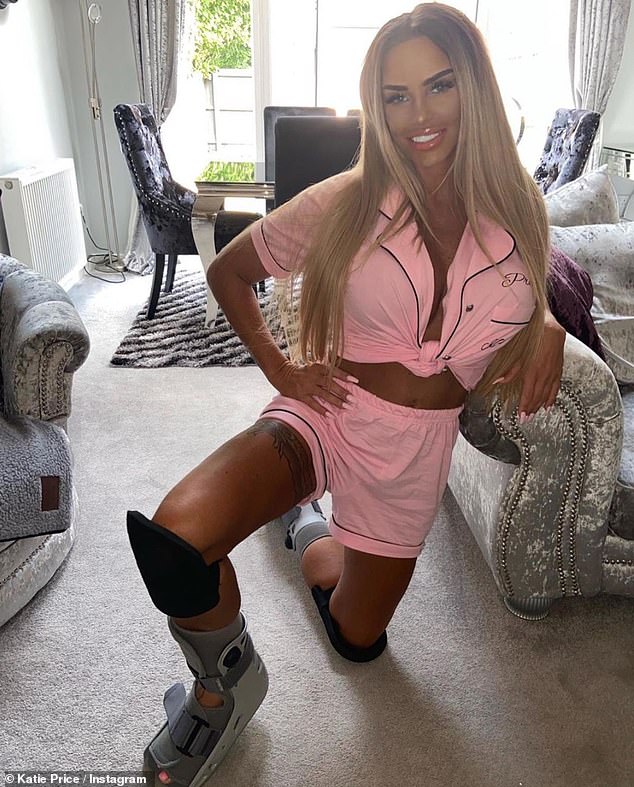 Stay strong: Katie also vowed that she is ‘never drinking again’ following the traumatising accident and plans to cover up her ‘mangled’ feet with tattoos