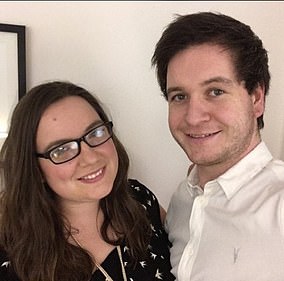 When Helen Goggin, 31, and her husband Daniel, also 31, bought their £150,000 three-bedroom property in Lancashire they always thought they’d be able to move with few issues.

But the couple have spent more than a year being unable to sell the property, sold to them by Barratt Homes, because it is a 155-year leasehold with an around £500 ground rent that doubles every 25 years.

‘We were first time buyers and we were completely miss-sold by Barratt,’ Helen told MailOnline.

‘We were made aware it was a leasehold but we weren’t given a copy of the lease until much later in the buying process.

‘We were told we could purchase the freehold for a small amount more but we couldn’t do this at the point of sale – and had to live in the property for two years first.’

When it came round to applying for the freehold Helen, who runs a pet care business for cats, dogs and chickens among other animals, said they discovered the land had been sold to a managing agent.

‘They now want to charge us a further £8,000 to get the freehold on top of the fees for our solicitor and theirs,’ she said. ‘And that’s just an informal purchase. It’s not worth the paper it’s written on’.

‘We’ve been on the market for over a year now and unable to sell.

‘We’ve had offers but the banks are pulling out of it. One actually refused to give a mortgage on the basis that our property had a 155-year lease.’

The property has a shorter lease than others on the same development, Helen said, making it especially hard to sell despite the space, garage and driveway.

She accused Barratt of taking advantage of the fact they were first-time buyers during the sale.

‘They knew they were selling these houses at leasehold and that these weren’t the same as the others on the development,’ she said. ‘Some friends pay £12-a-year in ground rent. We have to pay around £500-a-year.

‘They sent a bill to everyone on our estate last month and there was nothing we could do to challenge it. For them they’ve got all the money and all the power.’

On a personal level, she said the couple feel ‘stuck’ and as though they ‘can’t move forward’. But she was pleased to hear today’s announcement.

‘On the same level I’m really happy with everything that’s happening in the national leasehold campaign,’ she said. ‘We could be the selfish people and buy the fake freehold but that doesn’t sit right with me. We are good human beings and we don’t want to burden someone else with the same problem we’ve had.’