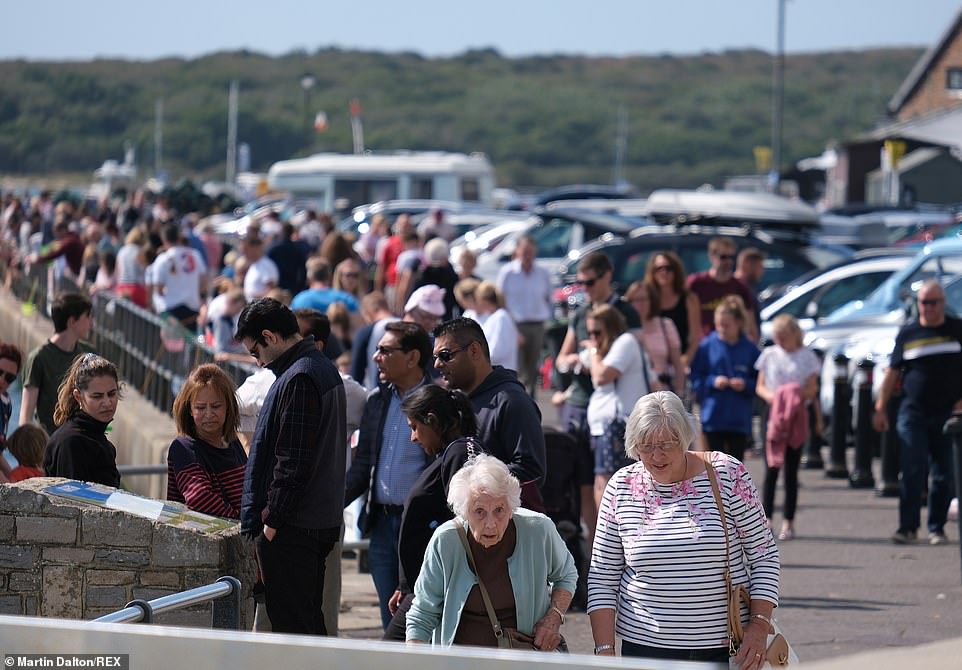 The UK could bask in higher temperatures once more as a ‘subtropical swell’ of warm air moves from the Atlantic and brings with it rising mercury levels and an end to the wet weekend.

Following a dreary start to the week which will see showers across most of England and Wales and mist and fog patches across the south, the country could once again be met with sunny spells and highs of 77F as we move into autumn.

The country will see a north-south divide today as outbreaks of rain persist across the northwest regions and much of Scotland and Northern Ireland remain dry with sunny spells.

However bright and sunny spells are expected to make their return by Tuesday evening as a 600-mile ‘subtropical swell’ of warm air sweeps in across the west.

Today, hundreds of visitors descended upon Mudeford in Dorset to enjoy the warm and sunny weather following a weekend of rain.

Elsewhere, revellers were spotted flocking to Wimbledon Common in London after the capital saw spells of sunshine begin to emerge from the grey clouds. 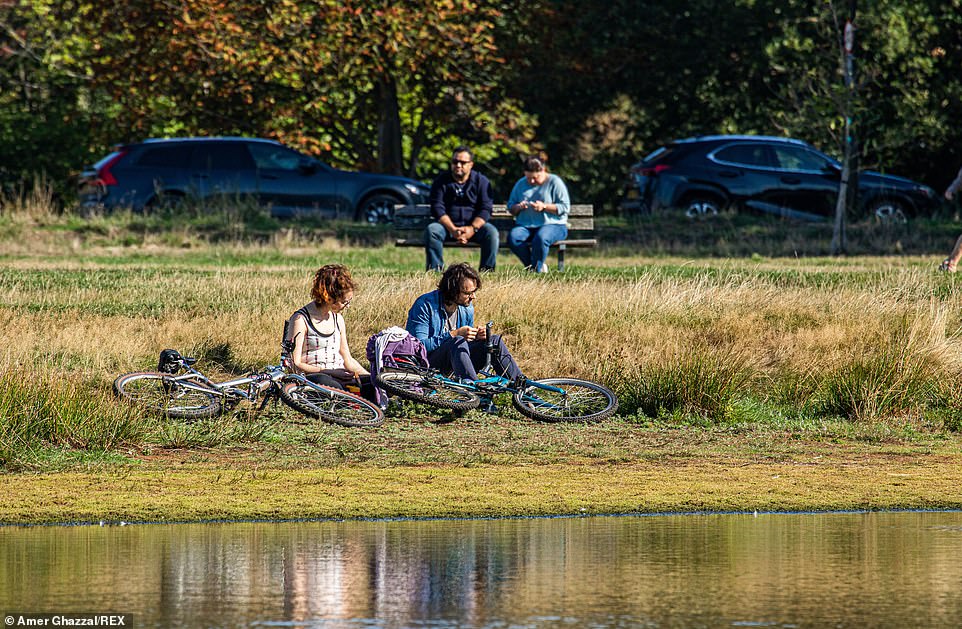 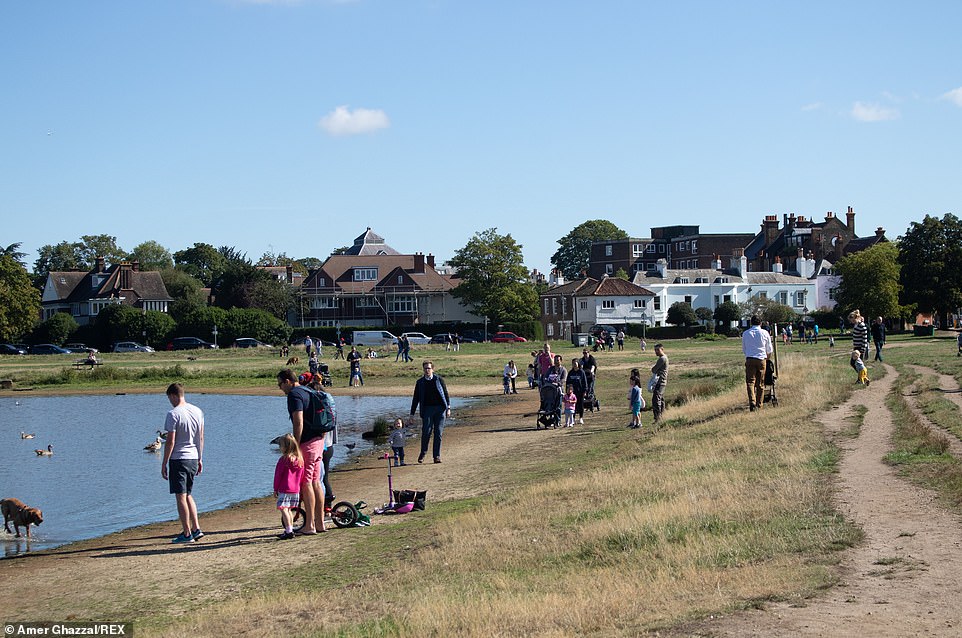 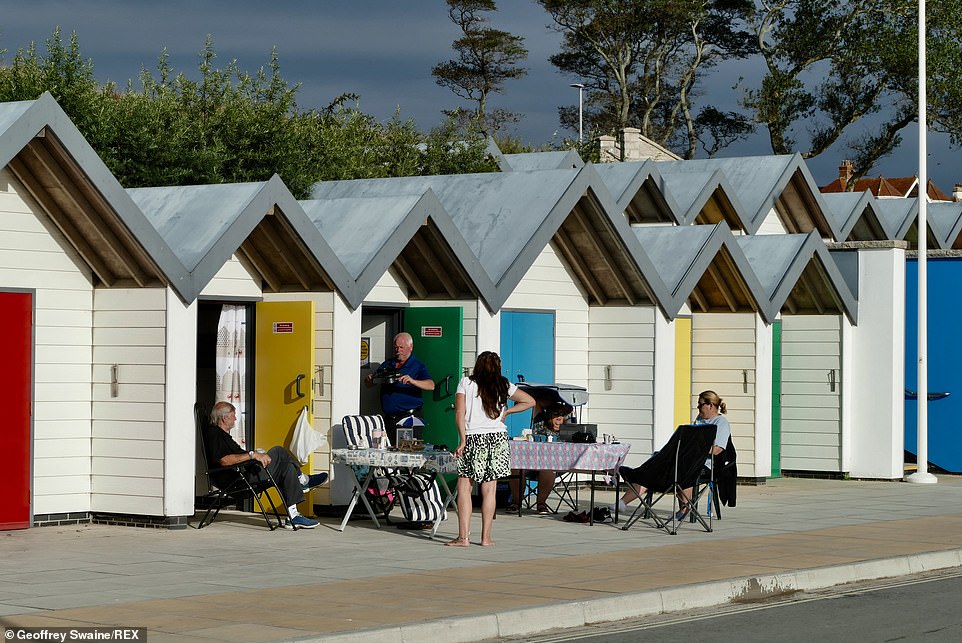 Despite a wet and windy start to the week, people sit outside their beach huts in Swanage, Dorset, today as the coastal town begins to see warmer temperatures once more 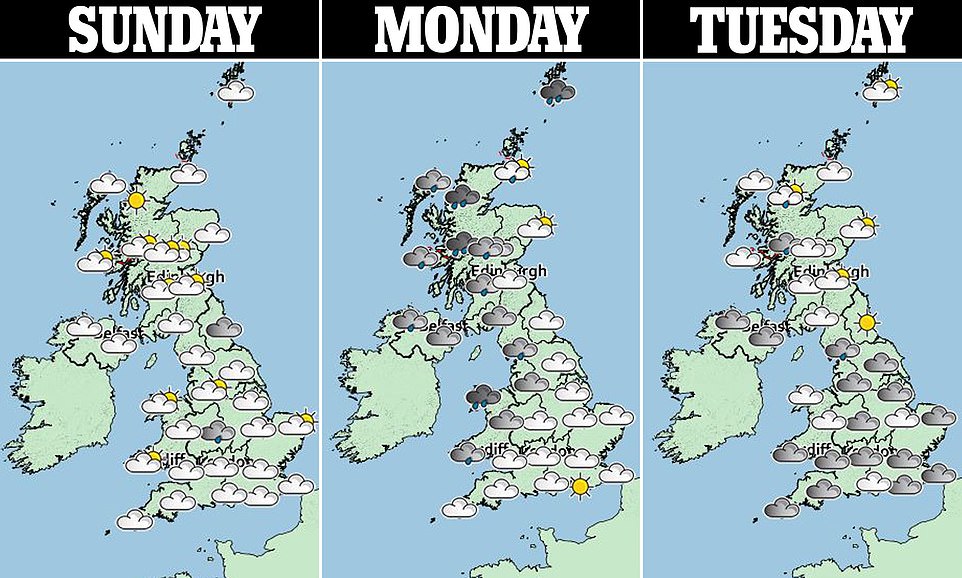 The sunny outlook comes a month after hundreds of Britons flocked to the country’s beauty spots to enjoy rising mercury levels as an ‘African heat flare’ brought with it ‘very hot conditions’ in southeastern areas and a ten-day heatwave from the beginning to the middle of August.

A Met Office spokesperson told MailOnline: ‘Today for England, Wales and Northern Ireland it’s a day of showers with some sunny spells. We could be looking at highs of 21C possibly 22C for the south east and that’s around average for the time of year.

‘For Scotland it’s looking drier and less windy with largely sunny skies and highs of around 17C.

‘As we go into later this evening and overnight we’ll see heavy rain pushing into north western parts and so tomorrow a fine start for England and Wales albeit a little chilly with some mist and fog perhaps however the wet and windy weather across northwestern parts across Scotland and Northern Ireland at first.

‘That is going to edge south eastwards into parts of England and Wales as we go through the day tomorrow.

‘Far southeastern parts of England and Wales probably staying bright through much of the day and not turning cloudier until later and here we could be looking at highs of 23/24C. 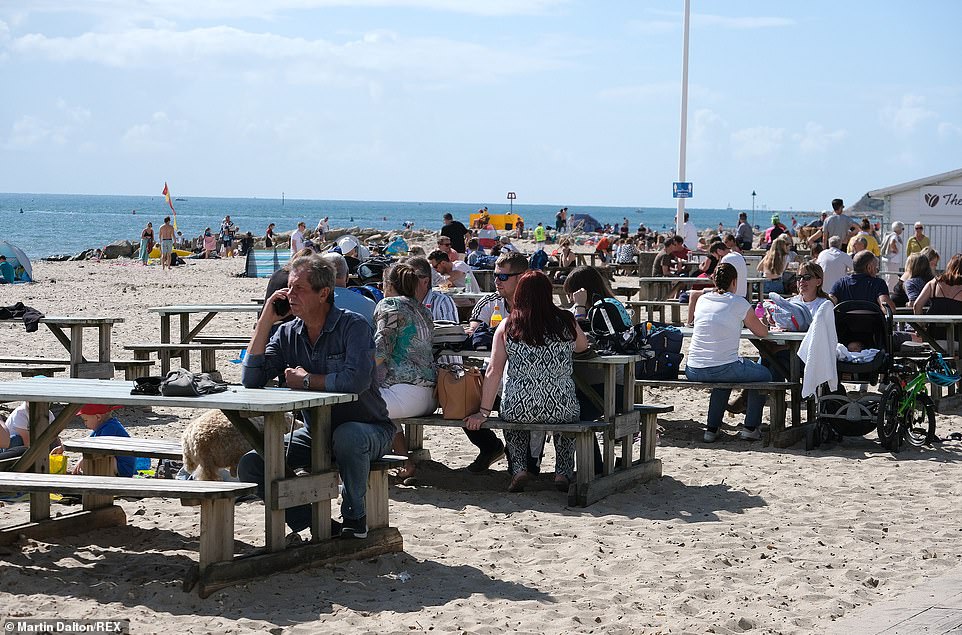 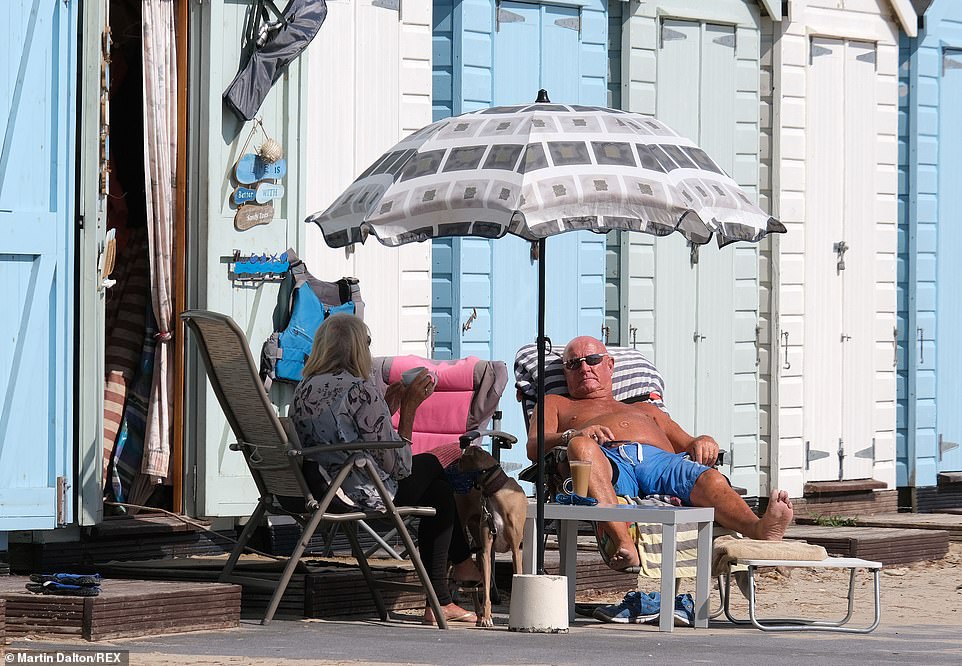 People bask in the sunshine in Mudeford, Dorset, today as showers began to slow down and leave most parts dry with clear spells 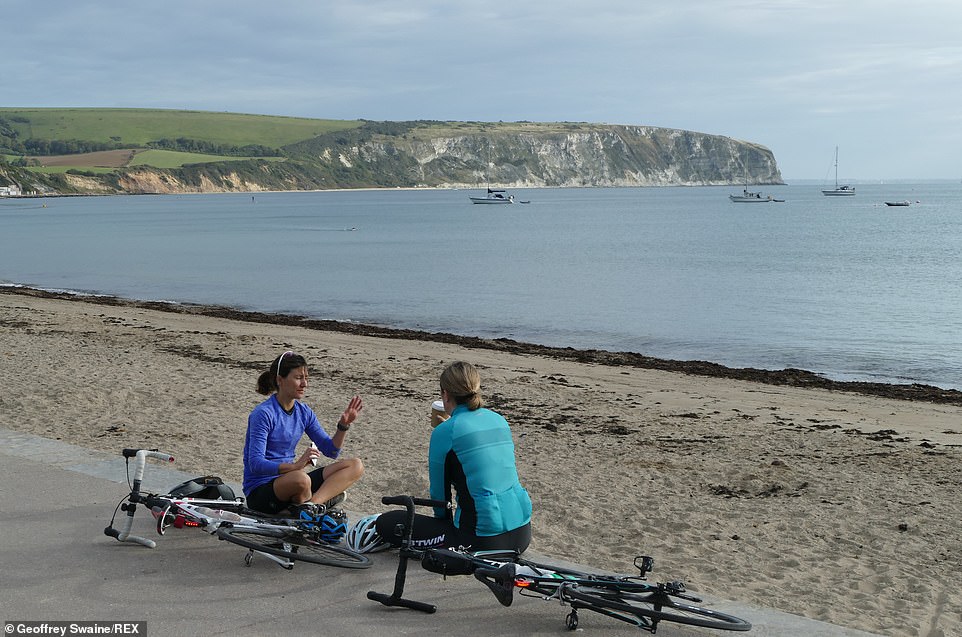 In Swanage, Dorset, cyclists sit down along the promenade to enjoy the sea air as showers begin to sweep across England and Wales 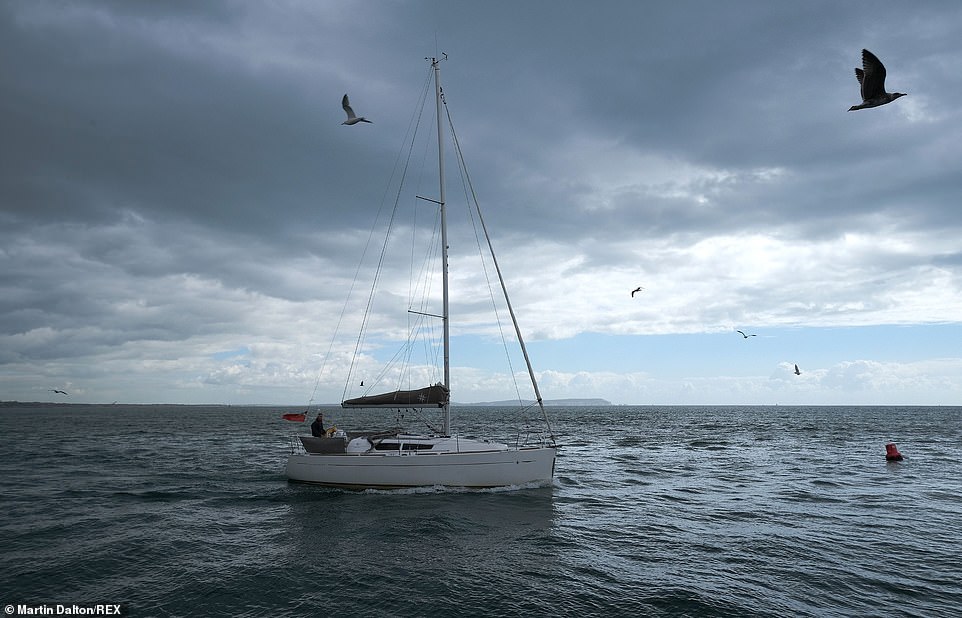 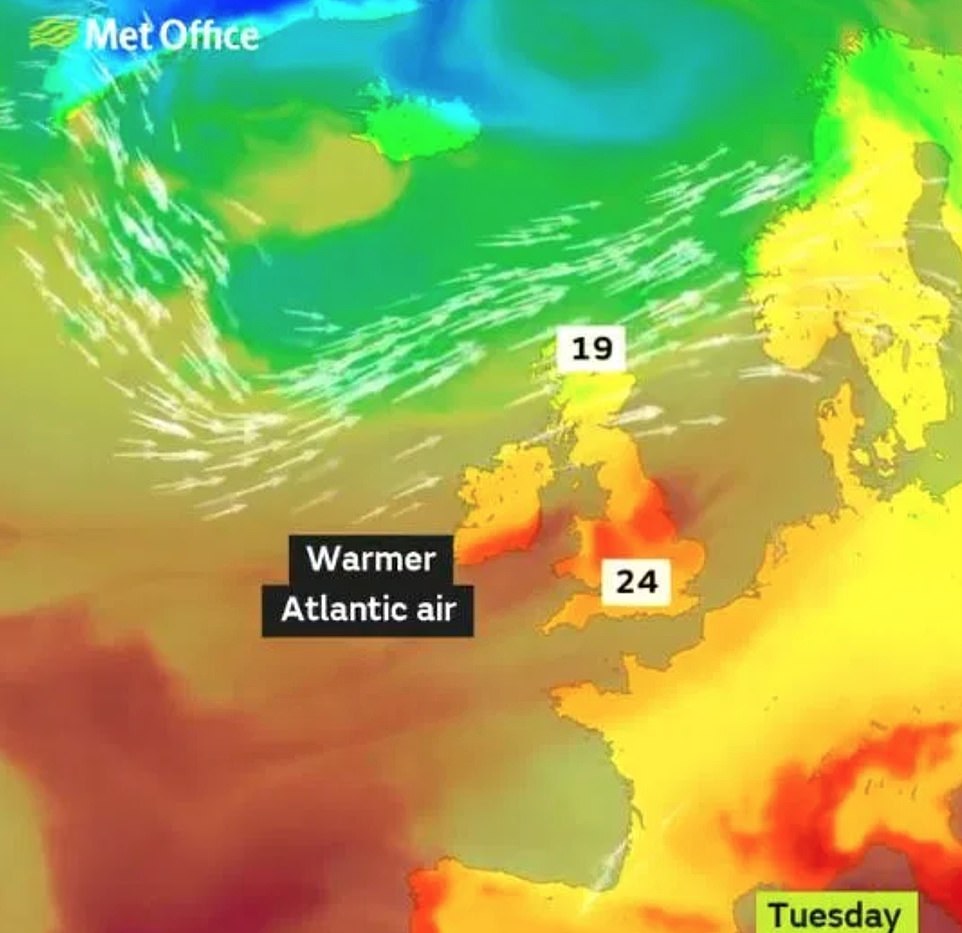 Following outbreaks of showers on Sunday, warmer weather is expected to arrive to the UK by Tuesday evening 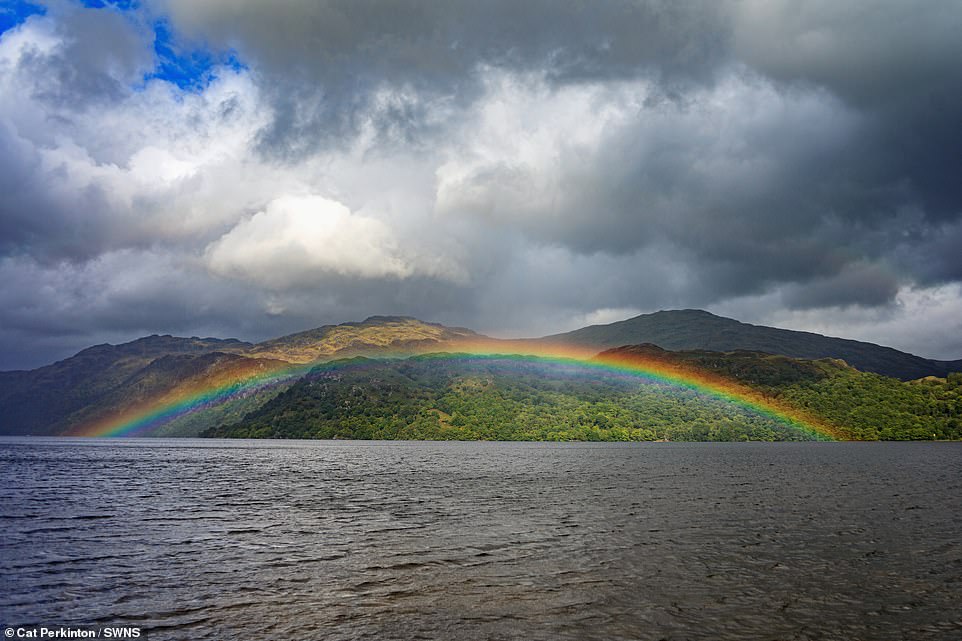 ‘And then Tuesday is going to be fairly cloudy, there will be outbreaks of rain from the west and further east there will be a greater chance of sunshine.

‘Temperatures will be a little higher from Monday so we could be looking at 24C possibly 25C. Later on we are going to have some further wet weather that is going to push in particularly into norhtwestern parts from Tuesday night into Wednesday.’

Last weekend drivers were warned they would be left facing traffic chaos over the Bank Holiday weekend after 18 million cars took to the roads for a last chance to enjoy a staycation.

The scenes came just a week after Storm Ellen smashed into Britain and brought 70mph winds, leaving tens of thousands of people in Ireland without power.