The Queen’s moving home! Grade I-listed Belvoir Castle has lost its starring role in Netflix series The Crown in a row over money

By Jo Macfarlane and Amy Oliver for The Mail on Sunday

It has already lost £2.5 million after being forced to close its doors during the Covid-19 crisis.

Now, Belvoir Castle has lost its starring role in The Crown in a row over money.

The Mail on Sunday can reveal that filming for the fourth season of the Netflix drama, which stars Olivia Colman as the Queen, was quietly switched from Belvoir to a rival stately home, Burghley House, 30 miles away.

Recent visitors to Burghley (pictured), an Elizabethan mansion in Lincolnshire, have been told that filming as already taken place for the next season of The Crown

Grade I-listed Belvoir, home to the Duke and Duchess of Rutland, has been the stand-in for scenes in Windsor Castle for the first three seasons of the hit TV show.

Its website still openly boasts of its connections to the drama – which saw Claire Foy and Matt Smith as the Queen and Duke of Edinburgh in earlier series. But recent visitors to Burghley, an Elizabethan mansion in Lincolnshire, have been told that filming has already taken place for the next season, which airs in November, on its 13,000-acre estate.

It is understood that the upheaval came after Belvoir’s chatelaine Emma Manners, the Duchess of Rutland, demanded a larger fee from the production team to ensure filming could continue at Belvoir when it threatened to interfere with the estate’s highly profitable shooting season. The filmmakers refused and upped sticks to Burghley.

A source said: ‘Belvoir Castle has been the scene of so many films, I think they felt they could call the shots. They were really tiresome over filming then they got greedy over money so the producers told them to get lost.

‘People assume a big show like The Crown is a cash cow but there is a budget as for any other show.’

Neither Burghley House nor Belvoir Castle were prepared to comment. Netflix said: ‘The Crown uses a wide number of historic locations throughout the UK to represent the different Royal households featured in the series.’ 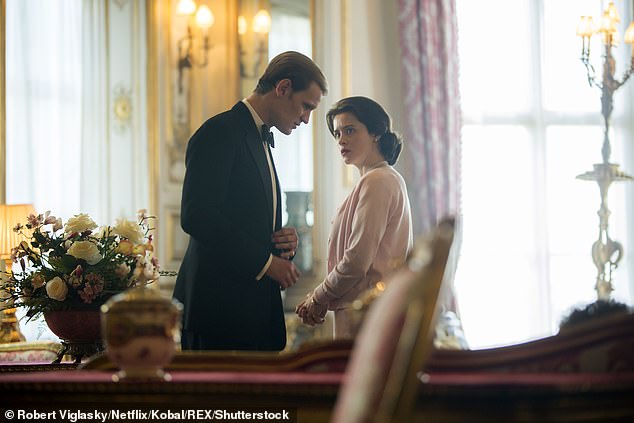 Matt Smith and Claire Foy are pictured in Season 2 of The Crown. Season 4 of the show airs in November