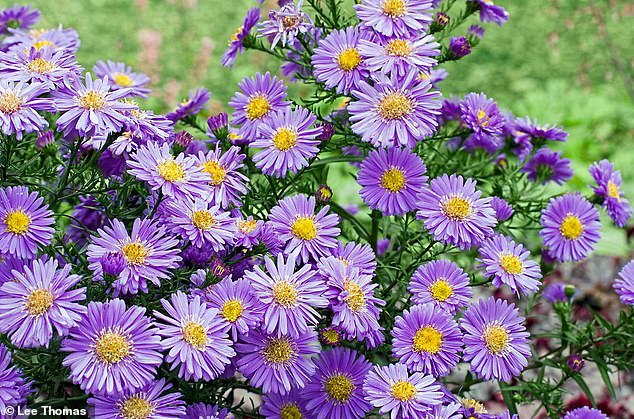 Late daisies delight: These colourful blooms will light up your garden this autumn

Welcome to the year’s most beautiful month. Yes, mornings grow colder and leaves are on the turn. But this is a season of change — not decline.

September is like spring for many plants and best among those are late daisies.

Autumn daisies flower when bees are boosting honey stocks for winter. The flowers in which they forage vary widely in both size and colour. Fancy rudbeckias can be tan, red or golden, usually with dark centres. Their sizes range from 25cm to tall perennials of 2.5m.

In contrast, Michaelmas daisies — named after St Michael’s Day, September 29 — have generous clusters of little flowers in gentler tones. Colours include mauves, violet-blues, gentle pinks or white, often with lemon or yellow flower centres. These also range in height from dwarf cushion plants to those which flower at head height.

If you have space, late daisies will transform a garden. Add a few outdoor chrysanthemums plus some tall sedums, and you could enjoy floral fireworks right up to mid-November.

Season of change: Michaelmas daisies will bloom from now until October

Perennial sunflowers are magnificent. But they’re also yobs, shoving neighbouring plants aside with their vigorous growth. But, if they are controlled, they’re magnificent. Colours run from the pale Lemon Queen to the warm eggyolk of Autumn Gold.

Michaelmas daisies bring cooler, gentler colours. Botanists recently changed the names, so what used to be Aster are now Symphyotrichum. They’re easy and dependable but many are prone to mildew.

Varieties of S. novae-angliae are the most resistant. They come in pinks, purple or white, most flowering from now onwards. Later blooming S. novibelgii varieties are more varied but some are disease-prone.

Spring is good for bare-root planting of autumn daisies, but you can buy containerised selections and plant when you like. Many varieties are clumpforming. For new plants, lift and divide those after flowering or in spring. When splitting clumps, re-plant young divisions taken from their edges, rather than from older centres.

Set into well-worked, freedraining soil. A light spring feed is all they’ll need. Home-made compost is better if you have it.

Be wary of invasive varieties.

Perennial sunflowers are shockers for spreading and need controlling. But they’ll flourish in poor soils.

And Senecio pulcher has big rose-magenta daisies. Though barely hardy, it has survived 16 winters in my cold garden.