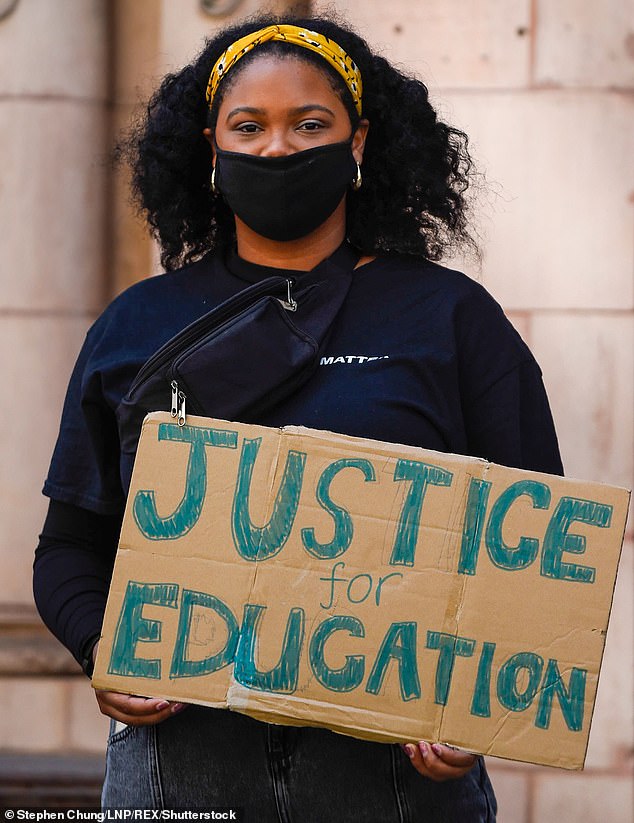 A prominent union leader has called for university students to stay at home this autumn to help prevent a second wave of coronavirus – unless they are poor, black, disabled, gay or transgender.

Larissa Kennedy, president of the National Union of Students, warned it was too dangerous for undergraduates to flood campuses but said exceptions should be made for those from certain backgrounds.

During a webinar last week hosted by the University and College Union (UCU), which has been accused of scaremongering after claiming that universities could become ‘the care homes of the second wave’ if they reopen as normal, Ms Kennedy said students had been ‘sold a lie for months’ that ‘going back to [university as] normal is possible, viable, safe’.

Larissa Kennedy, president of the National Union of Students, warned it was too dangerous for undergraduates to flood campuses but said exceptions should be made for those from certain backgrounds

But she added that some students ‘do need to move’ to university because home might not be ‘viable or safe’ for them and reeled off a list of groups she believes should be given priority.

‘Working-class students’ should, she said, be able to live on campus because their homes might not ‘have all the facilities including technology and broadband’ to study remotely while non-white students should also be able to return, as ‘we know that students of colour are disproportionately [living] in crowded households and disproportionately hold caring responsibilities’.

Disabled students could require ‘equipment, support, other reasonable adjustments’ not available at home, she went on, and gay, bisexual and transgender students could ‘find themselves in [family] environments that are homophobic or transphobic, and need to leave those’. 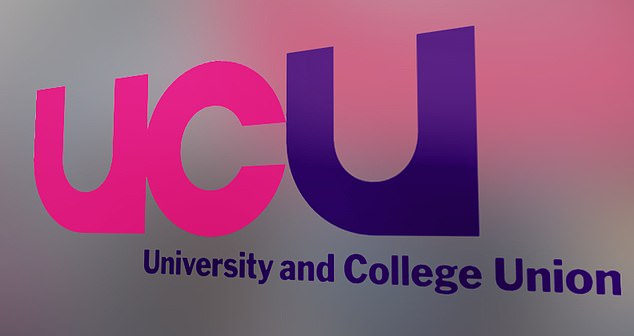 The UCU (pictured) has also been criticised for highlighting a claim by a Left-wing computer scientist that 50,000 people will die if university students return this autumn

Ms Kennedy said members of such groups should be given ‘safe access’ to campus accommodation so as not to ‘widen the gap in educational justice’ caused by the pandemic. ‘If we can hold space for students at the margins, for those who – particularly – campus is and needs to be home, then I think we will navigate our way through this situation and ensure that everyone is safe and cared for,’ she said.

UCU general secretary Dr Jo Grady, whose call for students to stay away from campus was branded ‘a blatant piece of politicking’ by the former Labour education secretary David Blunkett, agreed, saying it was time ‘to reach out to them, to get them to where they need to be, and not create the chaos of everybody else moving around’.

The UCU has also been criticised for highlighting a claim by a Left-wing computer scientist that 50,000 people will die if university students return this autumn. Quoting research by Professor Alan Dix of Swansea University, the UCU tweeted: ‘Without strong controls, the return to universities would cause a minimum of 50,000 deaths.’ 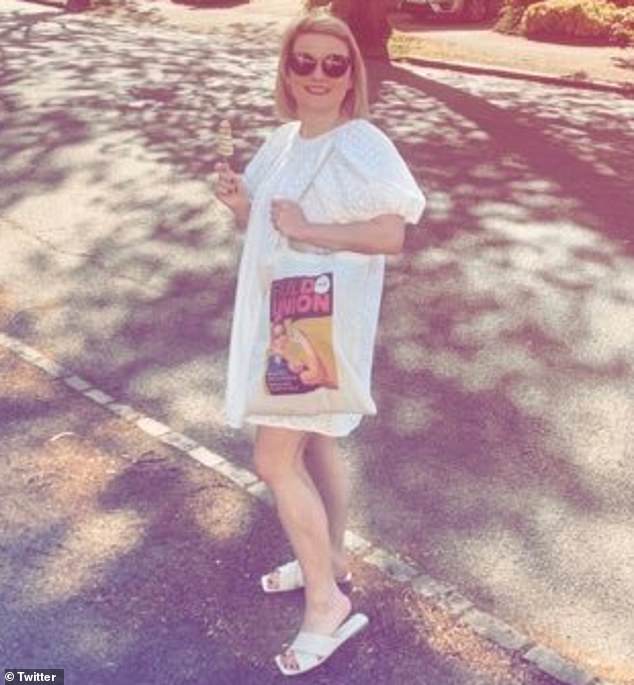 But Dr Kit Yates, author of the book The Maths Of Life And Death and co-director of the Centre for Mathematical Biology at Bath University, told BBC Radio 4’s More Or Less programme that the study had made a series of major assumptions including imagining that all 1.9 million UK students would become infected, over-estimating how many other people students would infect and overstating the death rate.

Ms Kennedy stressed the groups she identified were not an ‘exhaustive’ list and there might be other individuals who would need to live at university because they could not study effectively at home. The UCU failed to respond for comment.

By Julie Henry for the Mail on Sunday

University sports captains and fitness instructors are to be banned from telling students to ‘burn those calories’ or ‘work off last night’s pizza’ because it is ‘fatphobic’.

Mandatory training on the harmful impact of weight stigma will be introduced at Bristol University this term for sport and exercise staff and students running teams.

It comes after the Student Council condemned the ‘insidious presence of diet culture’ at the university, highlighting phrases such as ‘let’s slim those waists’ as evidence of so-called ‘thin privilege’. 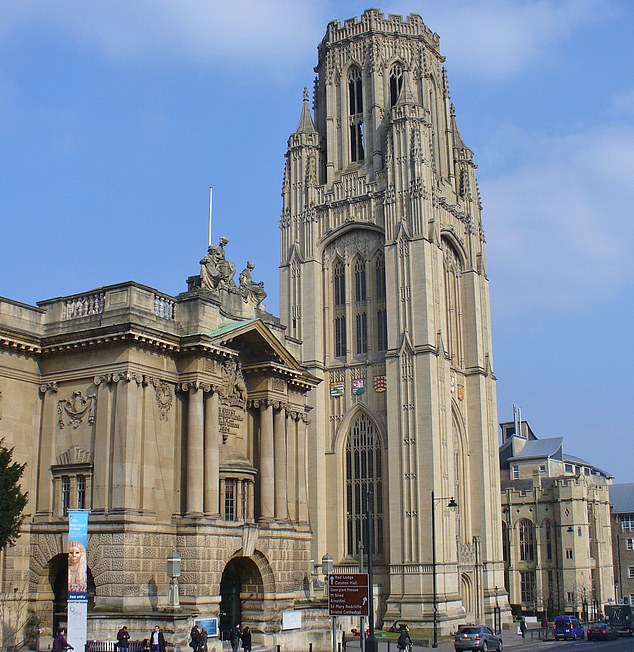 ‘This rhetoric is common in the fitness industry,’ said Abbie Jessop, one of the students who brought the motion, in a blog.

‘It communicates the toxic ideals of diet culture, notably that thin equals health and exercise is only a compensatory activity to burn calories.’

As part of the initiative, the students’ union will conduct a ‘full review of sports, exercise and health messaging to ensure that it is not triggering’.

But critics described it as the latest example of ‘cancel culture’. Frank Furedi, emeritus professor of sociology at Kent University, said: ‘The policing of language on campuses has acquired an unrestrained dynamic.

‘Soon even the word “athletic” will be denounced for triggering exercise-averse undergraduates.’

Last week, academics recommended that healthcare workers let obese patients decide which terms are used to refer to their excess weight, after research found they did not like terms such as ‘fat’.

By Caroline Graham in Los Angeles for the Mail on Sunday

It is an innocuous expression, but an academic has been suspended for using the Chinese word for ‘um’ because it sounded like a racial slur.

Professor Greg Patton was giving a lecture about the use of ‘filler words’ during an online class at the University of Southern California when he mentioned the Chinese expression ‘neige’ (pronounced ‘nee-gah’) saying: ‘If you have a lot of ‘ums and errs’… based on your native language, like in China… it might be nee-gah, nee-gah, nee-gah.’

A group of students threatened to withdraw from the class rather than ‘endure the emotional exhaustion of carrying on with an instructor that disregards cultural sensitivities’, adding: ‘Our mental health has been affected.’ 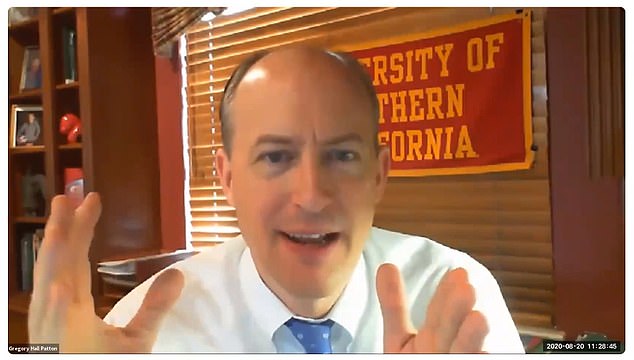 But last night the mother of a USC student said: ‘This is political wokeness gone mad. Professor Patton was teaching students about Chinese business culture and how the expression ‘nee-gah’ is often used as a pause in negotiations.

‘It was nothing to do with the N-word and there was no context for what he said to be interpreted as racist. It is heartbreaking.

‘A wonderful professor has been suspended and put through this. It’s outrageous.’

But the university has backed the students. In a grovelling apology, it said: ‘Recently a faculty member during class used a Chinese word that sounds similar to a vile racial slur in English. Understandably, this caused great pain and upset among students. We acknowledge the historical, cultural and harmful impact of racist language and offer supportive measures to any student, faculty or staff member who requests assistance.’ 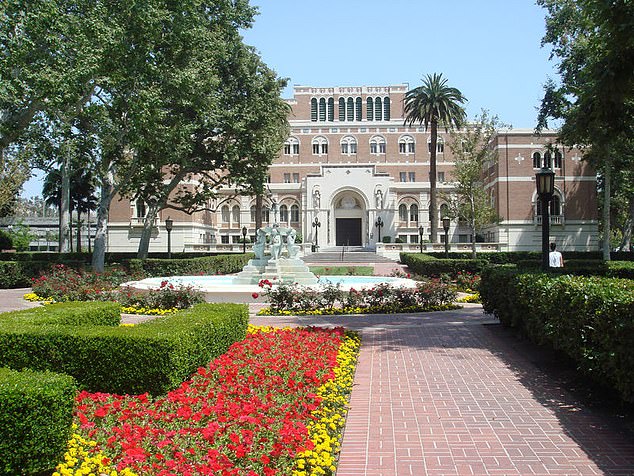 According to the university’s website, he is ‘an expert in communication’ and has received ‘numerous teaching awards’. Pictured: The Doheny Memorial Library at the University of Southern California

It said Prof Patton had been placed on administrative leave ‘while we review the situation and take any appropriate next steps’.

According to the university’s website, he is ‘an expert in communication’ and has received ‘numerous teaching awards’. A source said Prof Patton is ‘devastated’ by the episode and is consulting lawyers.

In an email last week, Prof Patton explained he had been teaching the class for a decade and tried to ‘include as many international, global, diverse, female, broad and inclusive leadership examples’ as possible in his lessons.

He said he had been taught to pronounce the word as he had in Shanghai, adding: ‘I have strived to best prepare students with real-world examples to make the class come alive. I did not connect this in the moment to any English words and certainly not any racial slur.’