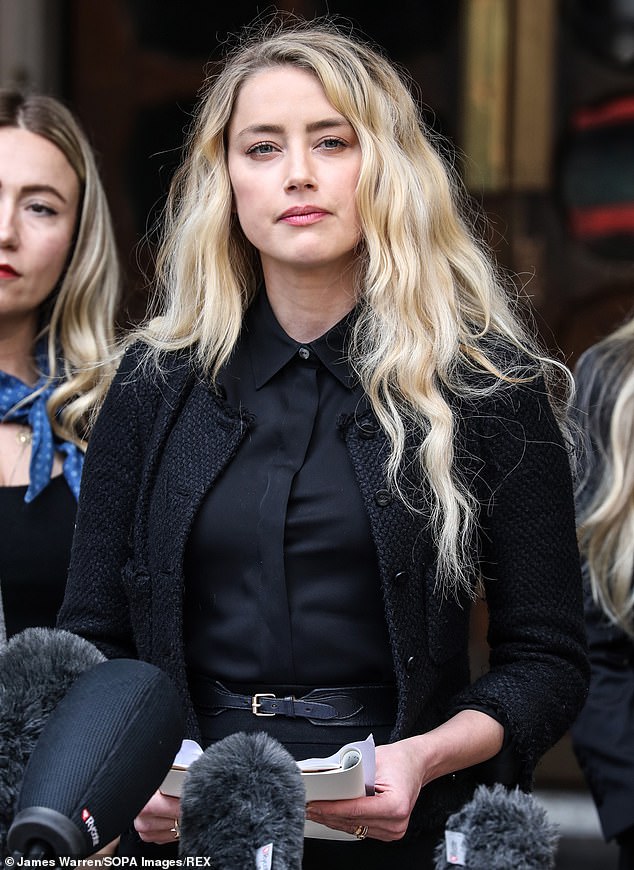 Amber Heard has reportedly opposed her former husband Johnny Depp’s request to delay their £37 million ($50 million) defamation trial so he can film Fantastic Beasts 3 in London.

According to The Sun, the actress, 34, accused the screen star, 57, of making ‘no effort whatsoever’ to follow their planned court dates in January next year and is treating the judge as ‘subservient’ in papers filed on Saturday.

The Hidden Palms star is said to have claimed she’s due to film Aquaman 2 in February 2021, with her schedule potentially being at risk of clashing with the case if Johnny’s motion is accepted.

Shut down: Amber Heard has reportedly opposed Johnny Depp’s request to delay their £37 million ($50 million) defamation trial so he can film Fantastic Beasts 3 in London

The Texan’s lawyers reportedly wrote against the appeal: ‘Although Mr Depp had been contacted in late June or July with the proposed filming dates, he did not alert them to the trial dates.

‘Mr Depp decided that, rather than speak with his employer to work his film commitments around his trial, he asks this court to subserviently reschedule around his employment and the entire film schedule and production.’

Pirates of The Caribbean actor Johnny, who is suing Amber for libel in Virginia, filed documents in Fairfax County on August 21, to push back the case until anywhere between March and June 2021.

Disagreement: The actress, 34, accused the screen star, 57, of making ‘no effort whatsoever’ to follow their planned court dates in January next year (pictured in the 2018 edition of the film) 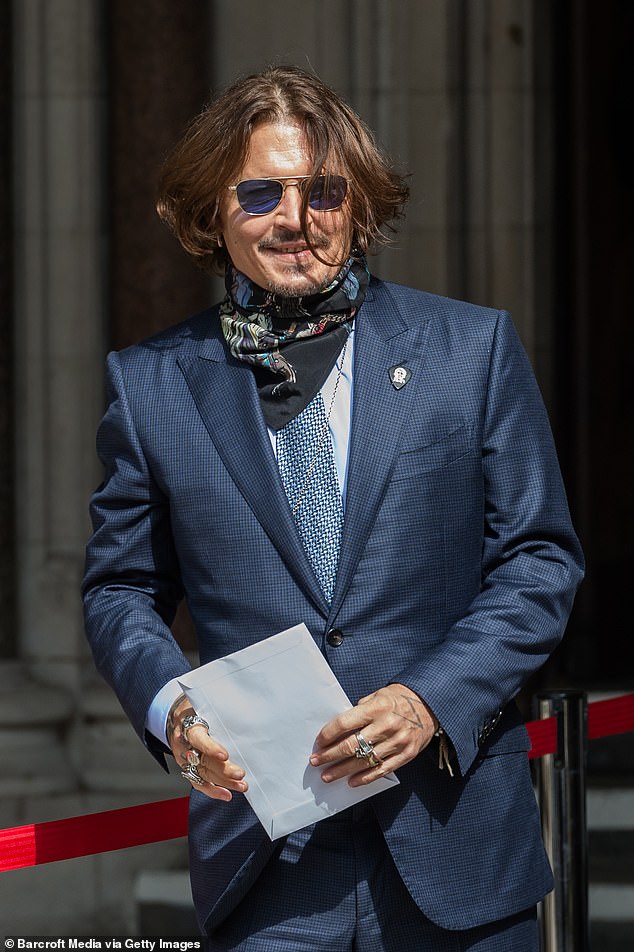 Request: Pirates of The Caribbean actor Johnny filed documents in Fairfax County on August 21, to push back the case until anywhere between March and June 2021

The court had set the trial to run from January 11 to January 28, although Warner Bros. recently revealed they plan on filming his fantasy sequel from October until February next year.

‘When the Court set the current trial date in this case, Mr. Depp understood that Warner Bros. planned to shoot‘Fantastic Beasts 3 in London long before January 11, 2021,’ an excerpt from the court filing read. 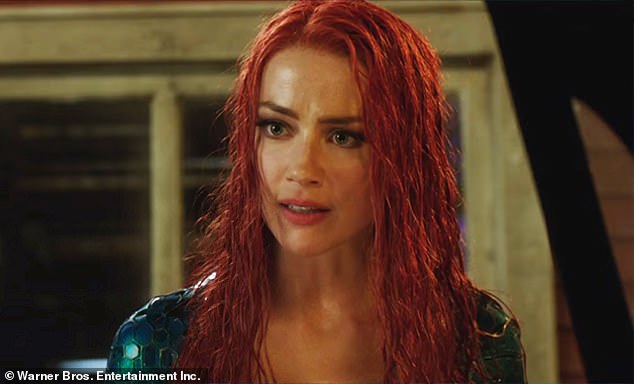 Clash: The Hidden Palms star is said to have claimed she’s due to film Aquaman 2 in February 2021 (pictured in first edition in 2018)

It added that the All the Boys Love Mandy Lane star would not ‘suffer any unfair prejudice’ from the trial being delayed until later in 2021.

The award-winning thespian wrapped up his 16-day libel trial against The Sun in July. Johnny is suing the newspaper over an April 2018 article that suggested he was a ‘wife beater’.

Explicit details of the pair’s turbulent marriage has dominated headlines, as each accused the other of domestic violence.

One claim included Johnny bashing Amber’s head into a fridge and sending texts threatening to cut off Elon Musk’s penis after suspecting they were having an affair.

Judgment in the High Court trial in London is not expected to be delivered by Mr Justice Nicol until late September, giving his lawyers enough time to prepare for his US defamation case against Amber.

In the US proceedings, Johnny is suing Amber for $50 million over a 2018 article she wrote in the Washington Post in which she describes herself as being a domestic abuse survivor.

It will feature all the same witnesses that appeared on behalf of either Depp or Heard in London and is also based on the same bombshell evidence that was produced at the High Court over the past few weeks.

The US hearing will also result in the former couple – who were married from 2015 until 2017 – returning to the witness box again to divulge details of their stormy relationship, which have already generated widespread publicity around the world. 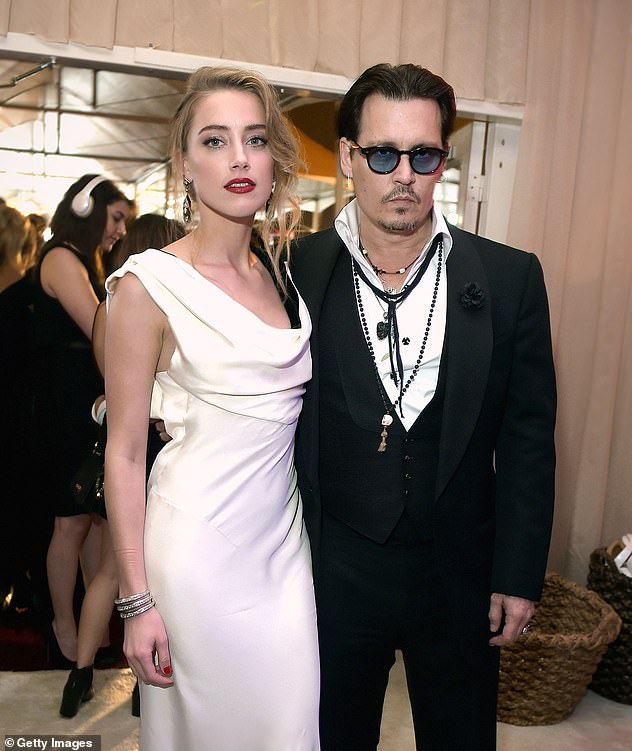 Bitter case: The award-winning thespian wrapped up his 16-day libel trial against The Sun in July (former couple pictures in 2015)

The documents insisted the father-of-two attempted to ‘defame Ms Heard and interfere with her reputation, career and livelihood’ through an online trolling campaign.

She said her ex and his lawyer Adam Waldman arranged for both authentic Twitter accounts and fake ‘bots’ to ‘smear and harass’ the Aquaman star.

The papers allege Waldman ‘is publicly associated with Russian individuals with the capability to organise such attacks’.

MailOnline has contacted Amber and Johnny’s representatives for further comment.

These are the key issues the trial judge, Mr Justice Nicol, has to determine.

– Whether the April 2018 article by the tabloid’s executive editor Dan Wootton was defamatory of Depp. Under the Defamation Act 2013, a statement is not defamatory unless its publication causes ‘serious harm to the reputation of the claimant’.

– The Sun’s publisher, News Group Newspapers (NGN), is defending the claim and relying on a defence of truth. It is for the publisher to prove that the allegations made in the article are ‘substantially true’.

– The meaning of the article, which is defined as what it would mean to the ‘reasonable reader’, will have to be determined by the judge. But NGN’s lawyers say the differences between the rival meanings contended by each side are ‘not significant’ and the outcome of the case will therefore not turn on meaning.

– Depp’s case is that the article bore the meaning that he was ‘guilty, on overwhelming evidence, of serious domestic violence against his then wife, causing significant injury and leading to her fearing for her life, for which he was constrained to pay no less than £5 million to compensate her, and which resulted in him being subjected to a continuing court restraining order; and for that reason is not fit to work in the film industry’. He strenuously denies the allegations and claims he ‘has never hit or committed any acts of physical violence against Ms Heard’.

– The meaning which NGN will seek to prove is true is that the Claimant beat his wife Amber Heard, causing her to suffer significant injury and on occasion leading her to fearing for her life. They rely on 14 separate allegations of violence and allege more generally that Depp was ‘controlling and verbally and physically abusive’ towards Ms Heard, particularly when he was under the influence of alcohol and or drugs, throughout their relationship. NGN’s lawyers say an important issue for the judge to decide will be what substances Depp was using during the relationship. They contend that he frequently lost control of himself, partly because of his heavy drug and alcohol use, and also that his memory has been impaired by his heavy use of drugs.

– If Depp wins his case, the judge will have to decide what level of compensation he should receive for the harm to his reputation and for the ‘distress, hurt and humiliation caused’. There is an upper limit on general damages for libel of £300,000 to £325,000. However, if he succeeds, Depp may also be entitled to aggravated damages. The actor is also asking for a final injunction against NGN, who his legal team say ‘have retained the article on their website and maintained their allegation to the bitter end’.