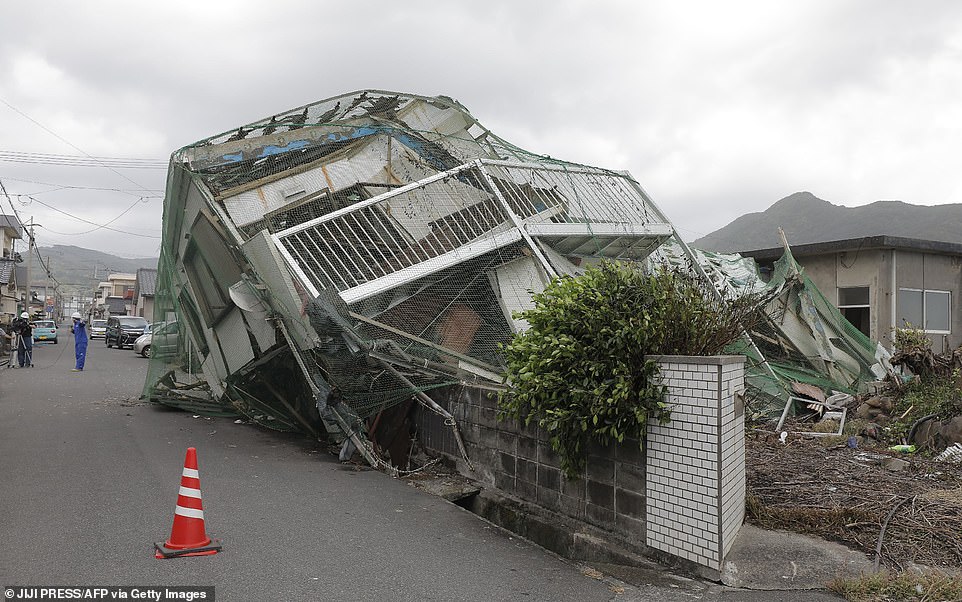 South Korea has hunkered down as Typhoon Haishen travelled northwards along the country’s east coast on Monday.

It comes a day after the powerful storm battered Japan’s southern islands with winds of 80mph and heavy rains, with four people are missing following a landslide.

The storm, carrying top sustained winds of up to 112 km (70 miles) per hour, cut power to more than 17,500 households in the southern tip of the Korean peninsula as it made landfall in the southern city of Ulsan, the country’s weather agency said. 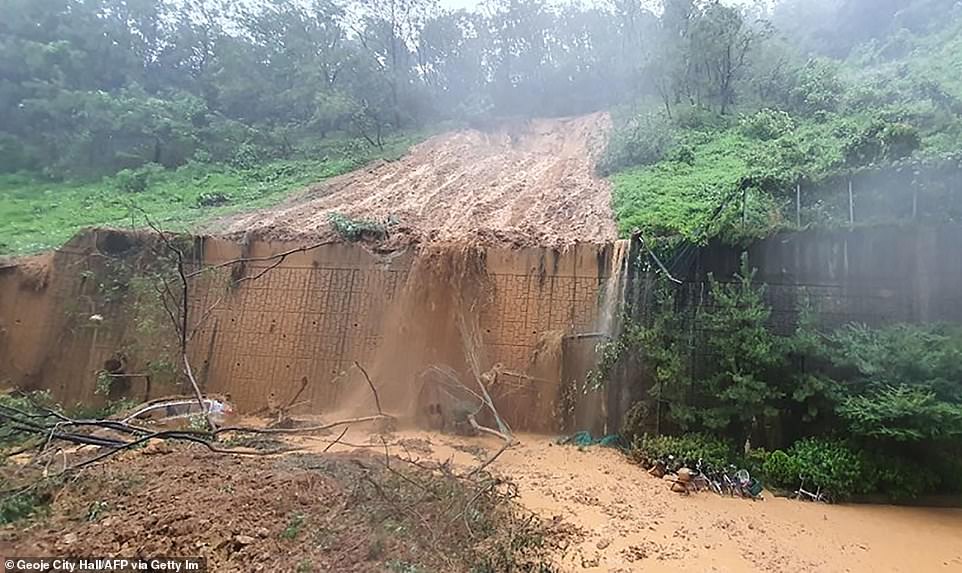 Mud and silt from a landslide covering a parking lot beside an apartment in Geoje, as Typhoon Haishen approaches South Korea on Monday High waves batter the coastline as Typhoon Haishen approaches in the southeastern port city of Busan, South Korea on September 7

The wild weather uprooted trees and caused landslides near apartment buildings on Geoje Island, off the southeastern tip of the peninsula, according to footage sent by residents to local broadcaster KBS.

At least one person was injured after their car overturned in strong winds in Busan, the country’s second largest city, where there was also flooding, the safety ministry said in a statement.

More than 1,600 people were evacuated in preparation for the storm, while more than 76 flights across 7 airports, including Jeju International Airport, were cancelled. 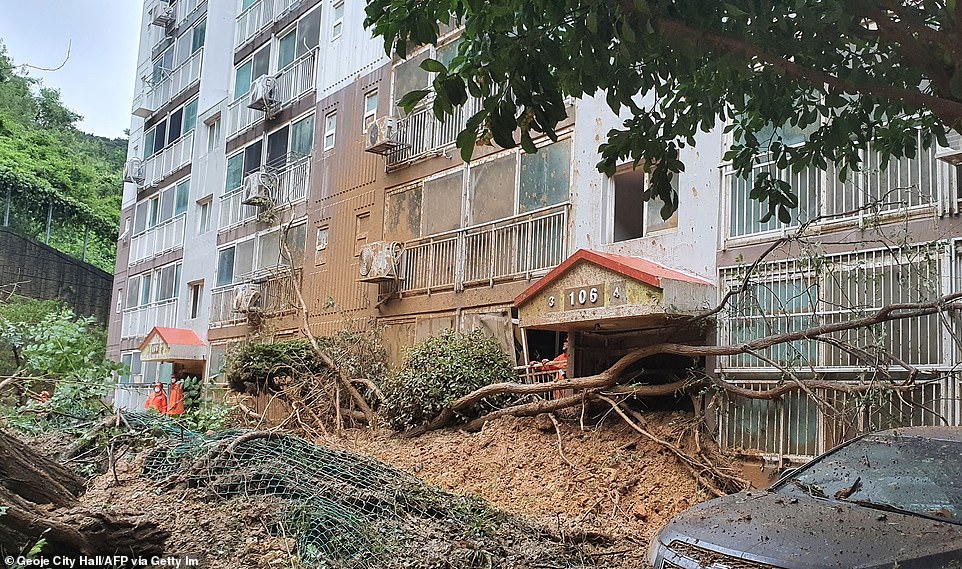 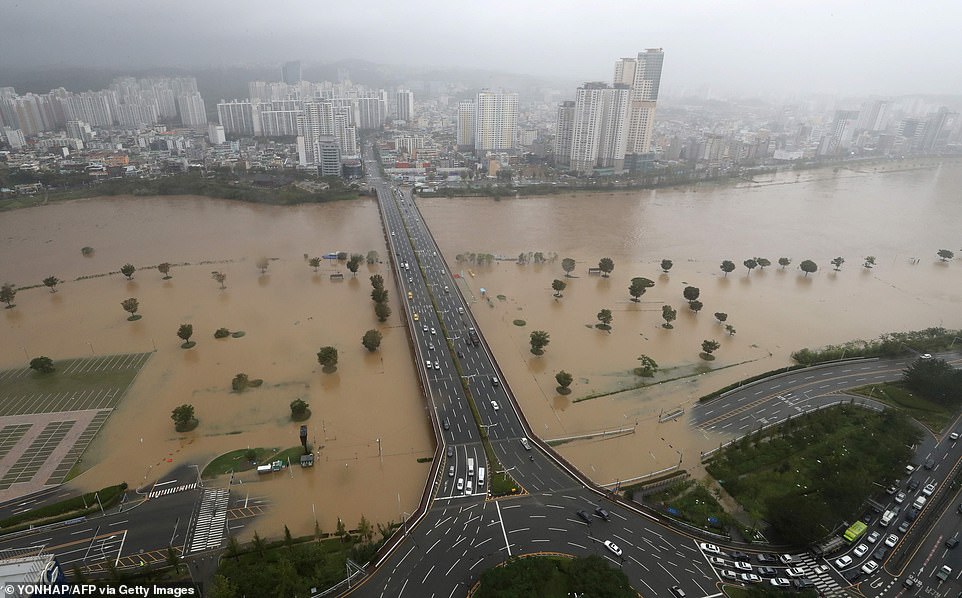 A riverside park near the Taehwa River is flooded by heavy rain caused by Typhoon Haishen in Ulsan on September 7. A powerful typhoon lashed South Korea on September 7 after hitting southern Japan 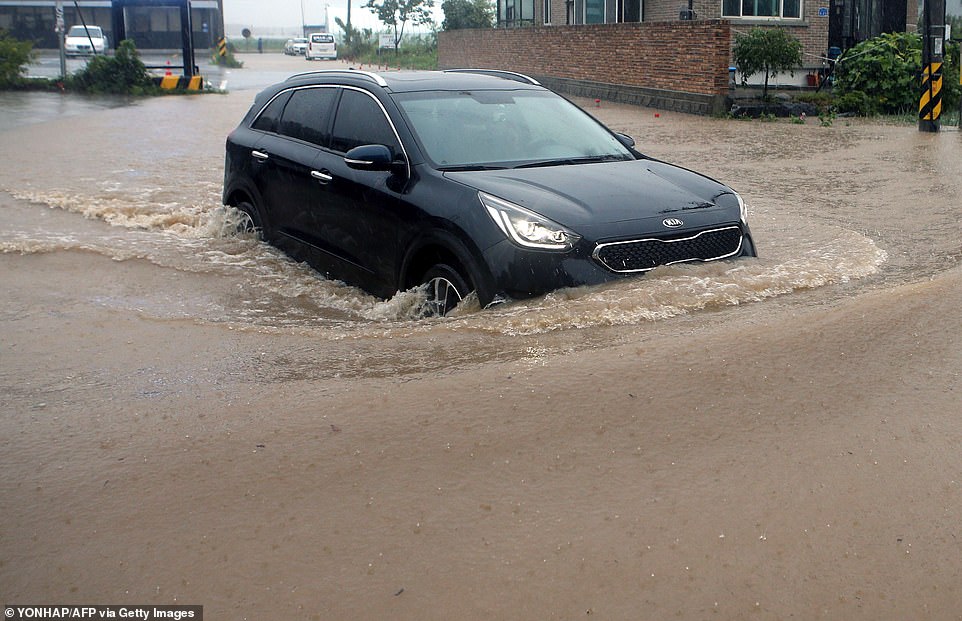 Two nuclear reactors in the city of Gyeongju, around 375 km (235 miles) southeast of Seoul were shut down, according to Yonhap news agency. Entries to national parks and some national train services have been suspended, the ministry said.

In Japan, the Kyodo news agency reported that four people were missing and more than 50 people were injured in the wake of the typhoon.

The four went missing in the village of Shiiba, in Miyazaki prefecture, after a mudslide hit the office of a construction firm, Kyodo said.

Among the injured were a woman who fell down a flight of stairs in the dark and four people who sustained cuts after the glass windows of an evacuation centre were blown in. 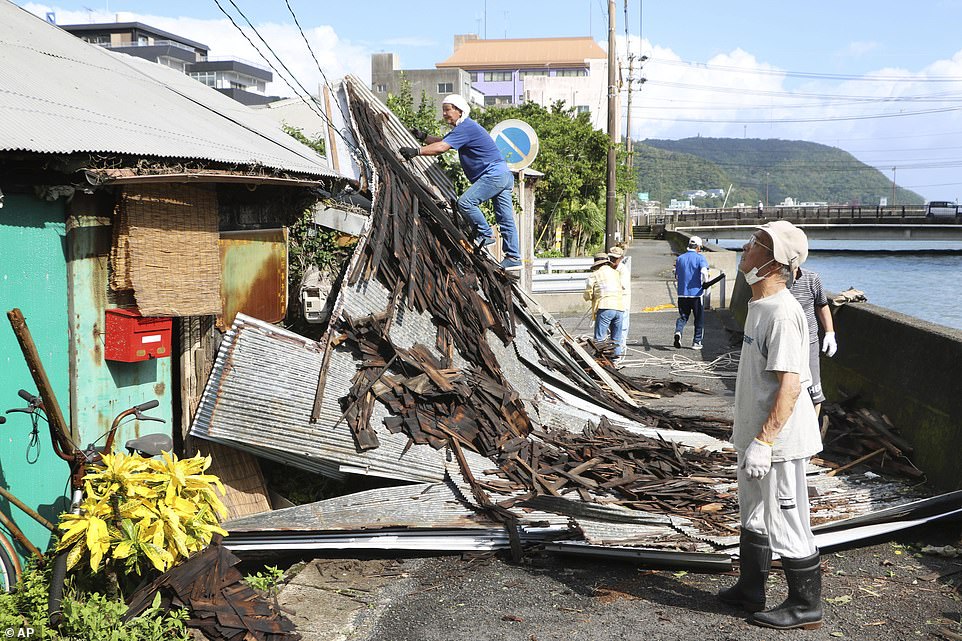 Residents mend the roof broken by strong wind following a typhoon in Amami, Kagoshima prefecture, southwestern Japan, on Monday. The Kyodo news agency reported that four people were missing and more than 50 people were injured in the wake of the typhoon 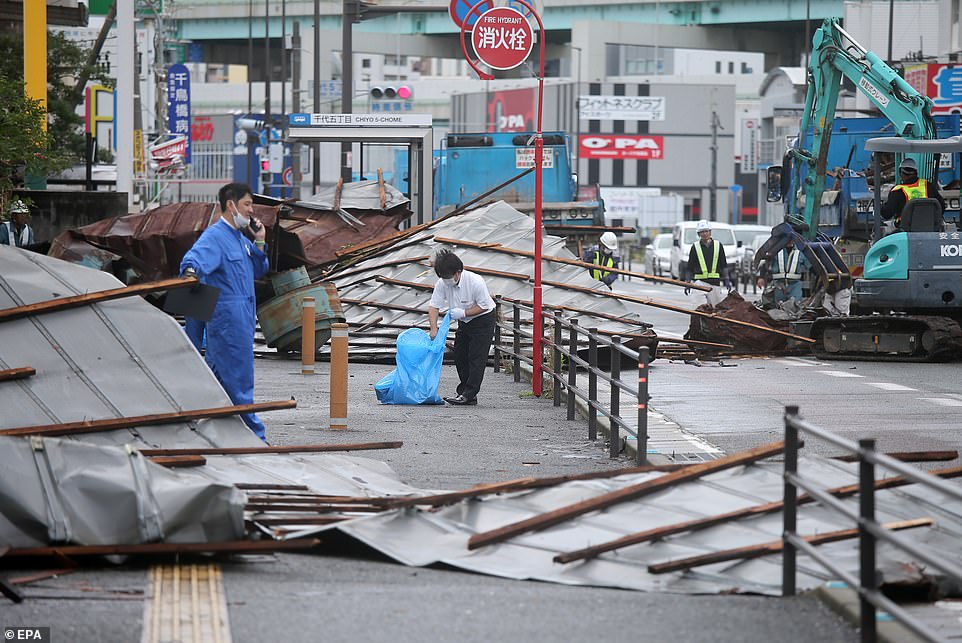 A destroyed roof lies on a street after typhoon Haishen hit Kyushu island overnight in Fukuoka, Japan, on September 7 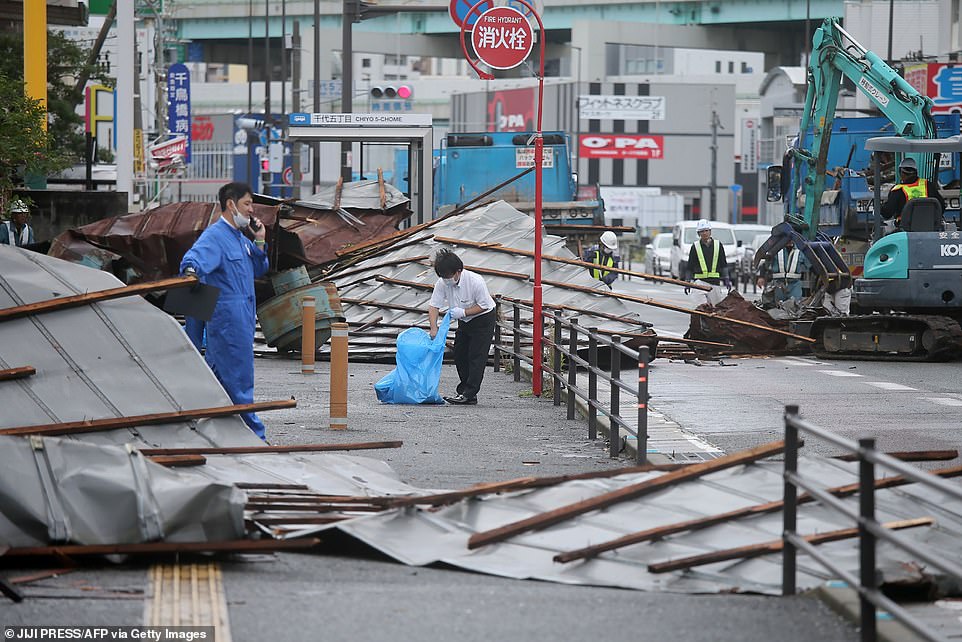 Almost 2 million people had been ordered to evacuate the region, which was still recovering from heavy rains and flooding in July that killed 83 people.

Typhoon Haishen weakened somewhat as it neared Japan’s mainland yesterday, and shifted further west out to sea, but it remained a ‘large’ and ‘extremely strong’ storm.

Evacuation orders in Japan are not compulsory, though authorities strongly urge people to follow them.

Local officials asked individuals to avoid crowded shelters where possible, to reduce the risk of coronavirus infections, and some centres were forced to turn people away in order to have enough space to maintain social distancing.

In some places, residents were checking into nearby hotels to comply with evacuations advisories.

Hotel Polaris in Shibushi city, Kagoshima, said all 73 of its rooms were sold out for the weekend. 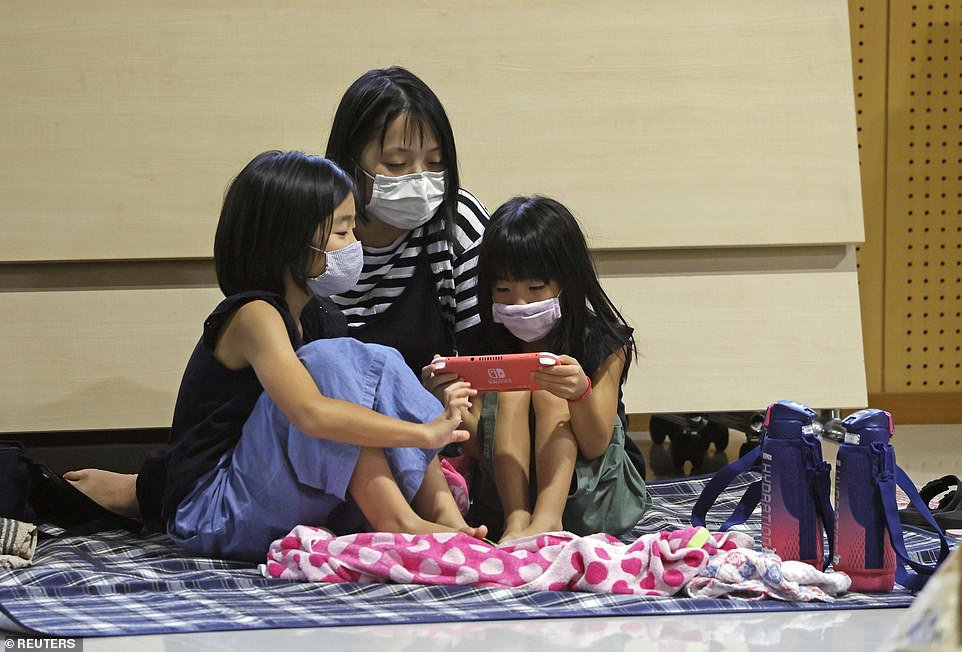 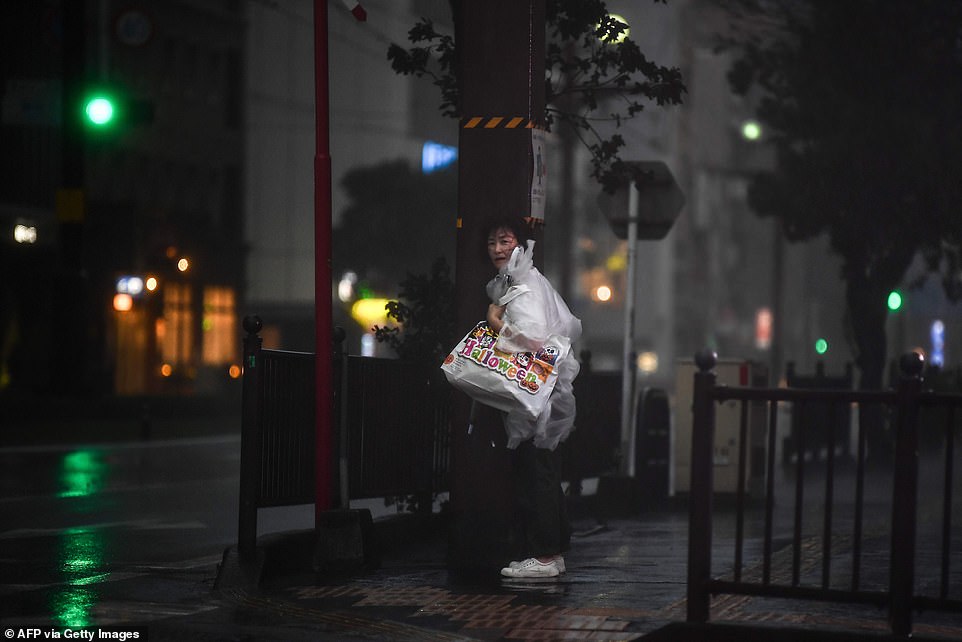 A woman walks in heavy rain as Typhoon Haishen approached in Kagoshima, Kagoshima prefecture on September 6

‘This is a large building for our area. I think our guests have chosen to stay with us to feel safe,’ front desk employee Takayuki Shinmura told AFP, adding that it was unusual for all of the hotel’s rooms to be occupied during typhoons.

Those who sought hotel rooms said the pandemic and discomfort of public shelters were weighing on them.

‘I am worried about coronavirus infections. We’re with small children too, so we did not want other people to see us as big trouble,’ an elderly man in Shibushi city told NHK after checking in at a local hotel with seven relatives. 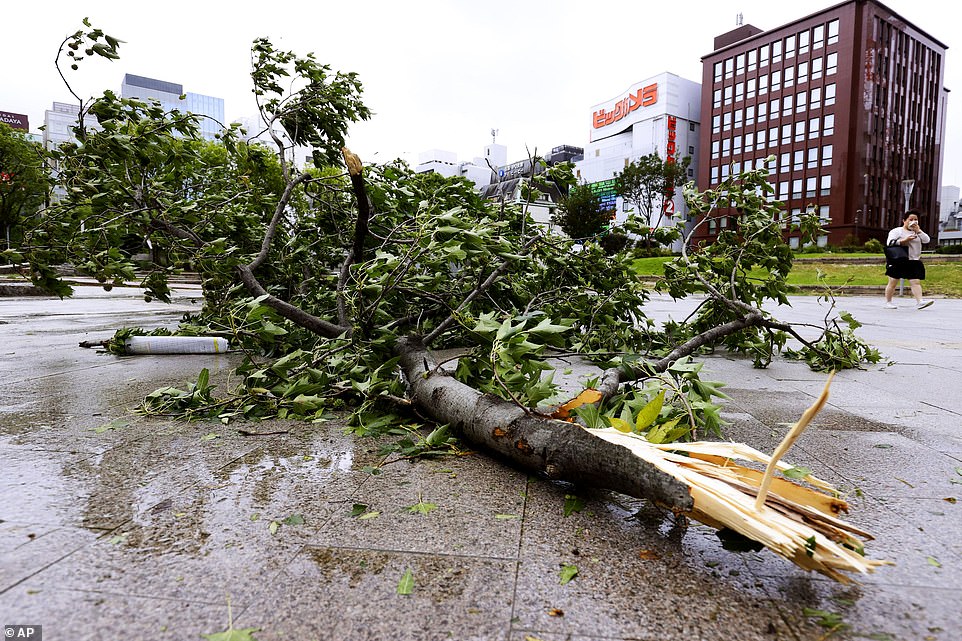 A broken tree lies down after typhoon hit Fukuoka, southwestern Japan, on Monday, September 7. The second powerful typhoon to slam Japan in a week left people injured, damaged buildings, caused blackouts at nearly half a million homes and paralyzed traffic in southern Japanese islands before headed to South Korea 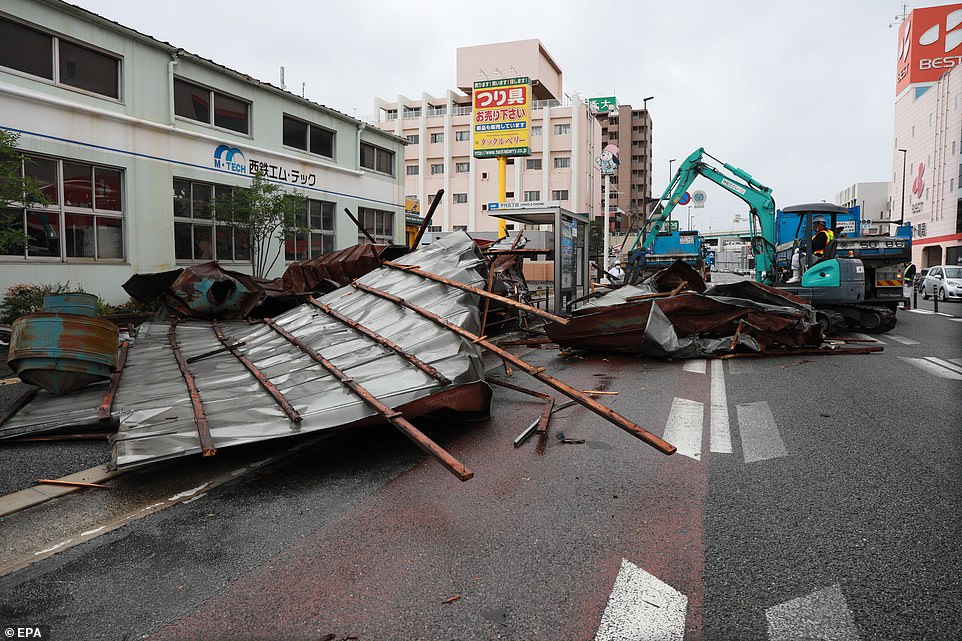 The roof of a house blown by strong wind caused by typhoon Haishen occupies a road in Fukuoka, southwestern Japan, on Monday 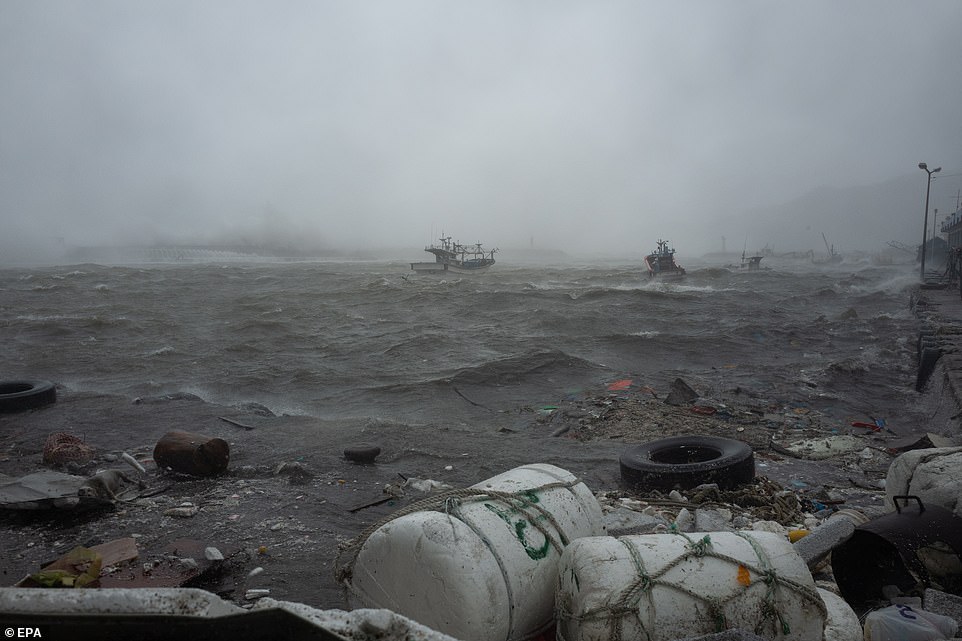 ‘Record-level rainfall is expected. It may cause landslides or it could cause even large rivers to flood,’ said Yoshihisa Nakamoto, director of the forecast division at the Japan Meteorological Agency, during a televised briefing.

North Korea, which bore the brunt of both Maysak and Typhoon Bavi a week earlier, is also in Haishen’s trajectory with the storm expected to draw near the port city of Chongjin Monday afternoon. 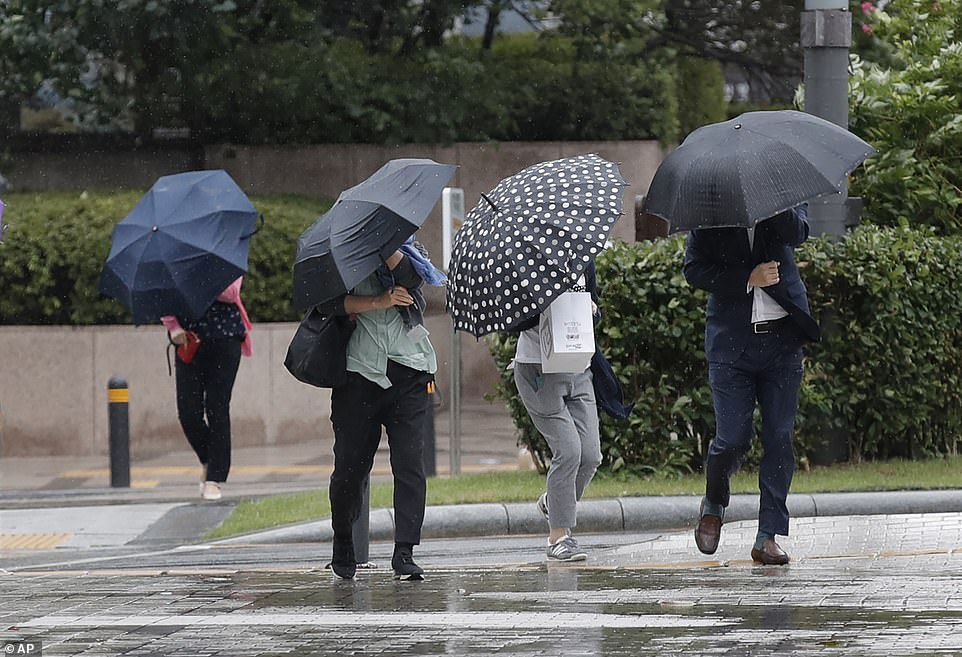 People struggle with their umbrellas against wind in downtown Seoul, South Korea, on Monday. A powerful typhoon damaged buildings, flooded roads and knocked out power to thousands of homes in South Korea on Monday after battering southern Japanese islands 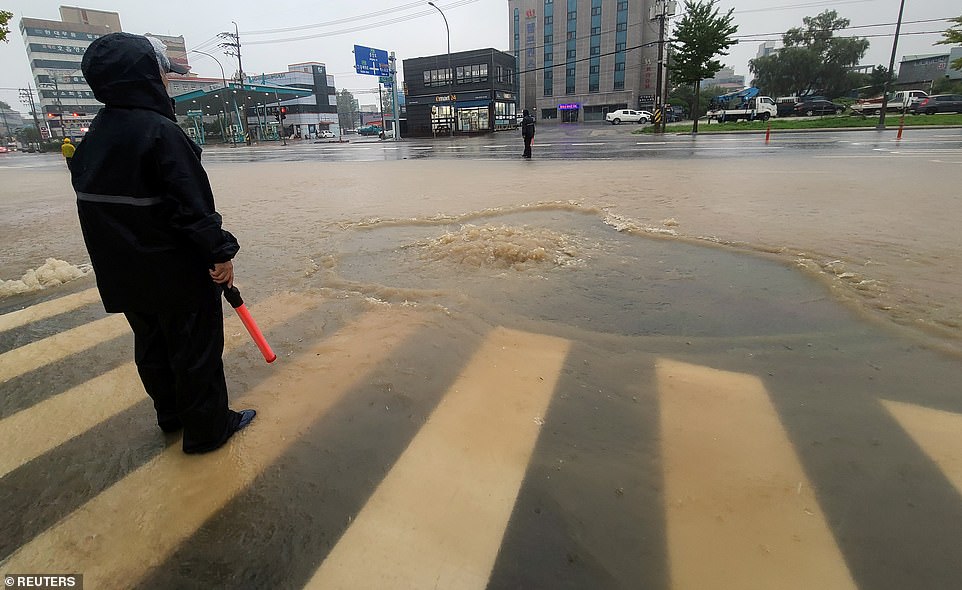 A man gives a traffic on a submerged road caused by typhoon Haishen in Sokcho, South Korea, September 7 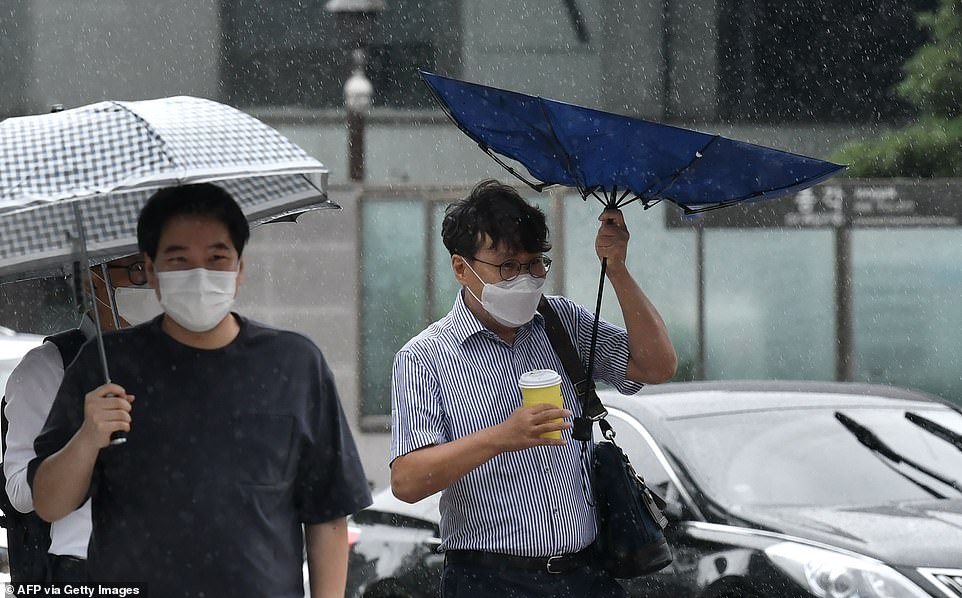 Live footage on state TV, a rarity that has now been broadcast for three weeks, showed trees shaking and waves rising in Tongchon county in Gangwon province bordering the South. The state broadcaster reported that all Tongchon residents had been evacuated.

North Korea’s agriculture sector is particularly vulnerable to severe weather, and this summer’s storms and floods have raised concerns over the country’s tenuous food situation. 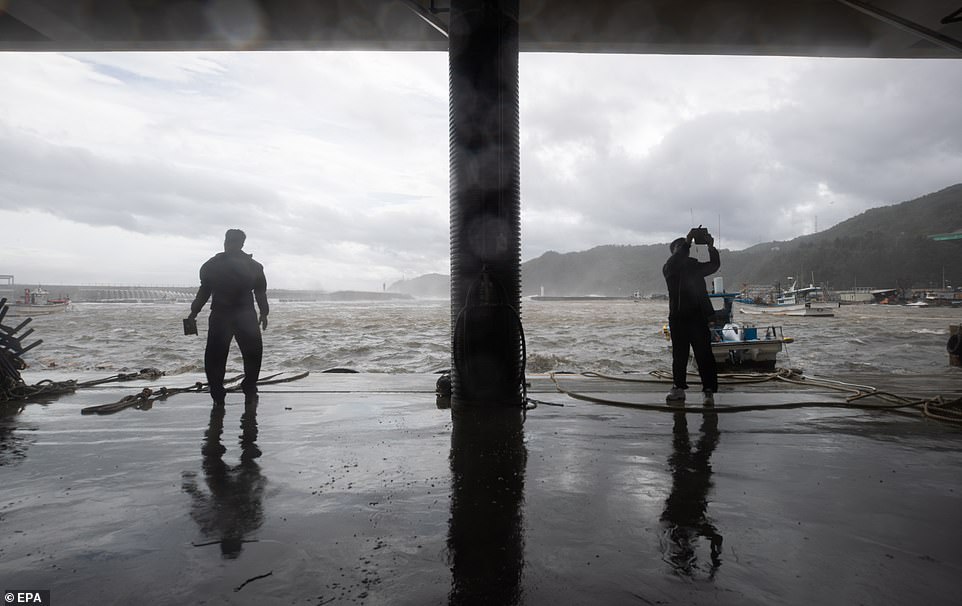 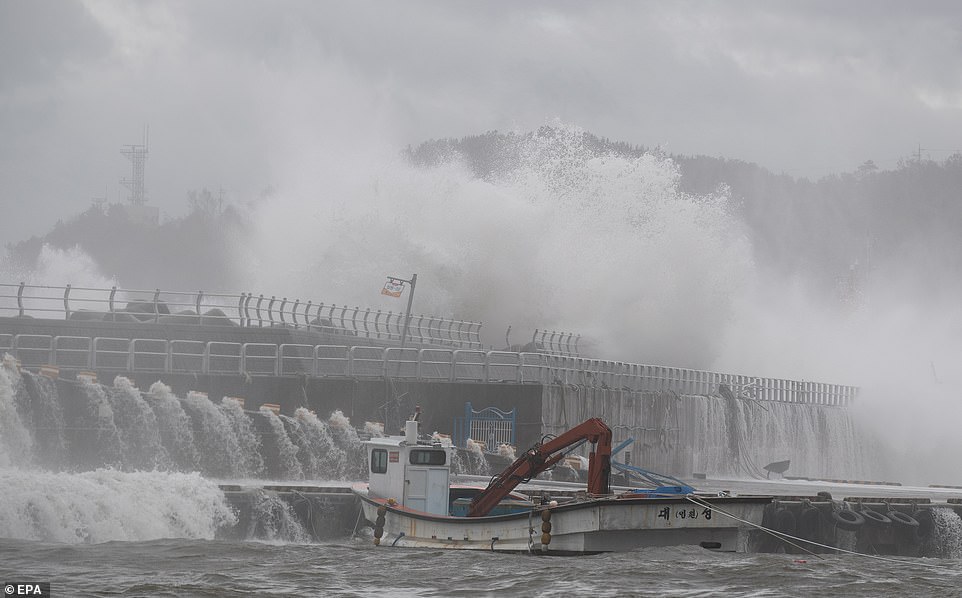