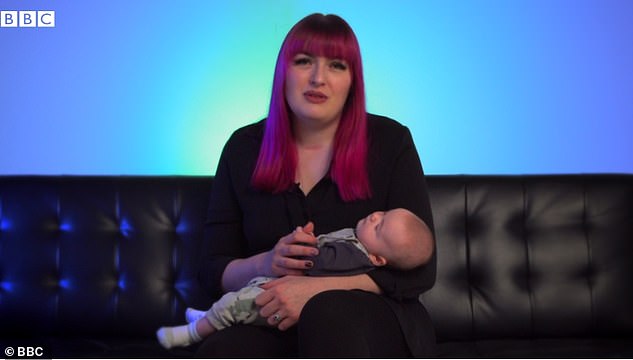 Three mothers who had C-sections have described feeling ‘guilt’ and revealed they feel ‘as though they had failed’ by not giving birth naturally.

British mothers Rachel, Olivia and Laura spoke to the BBC about having Caesarean deliveries, with each saying they felt their bodies ‘didn’t work as they should’ when giving birth.

Rachel, who cradled her son in her arms during the interview, explained she had ‘lost out on moments that were really special’ during the birth, which she said went from an exciting gender reveal to wondering if her baby was alive.

British mothers Rachel, Olivia and Laura spoke to the BBC about having Caesarean deliveries, with each saying they felt their bodies ‘didn’t work as they should’ when giving birth (pictured, Rachel with her son)

Olivia revealed: ‘I felt like I missed the mark. My body didn’t do what it was meant to do.’

Rachel explained that she struggled with balancing emotions after the surgery, saying: ‘On the one hand, I am eternally grateful that we’re okay and we survived and we are here. And that’s amazing and I love James and I love being a mum. I love it.

‘But there is the other side that I am going to need some sort of help and support with.’

She added: ‘There’s something wrong with you and you’ve failed. Your body doesn’t work how it should. But you’re both alright.’ 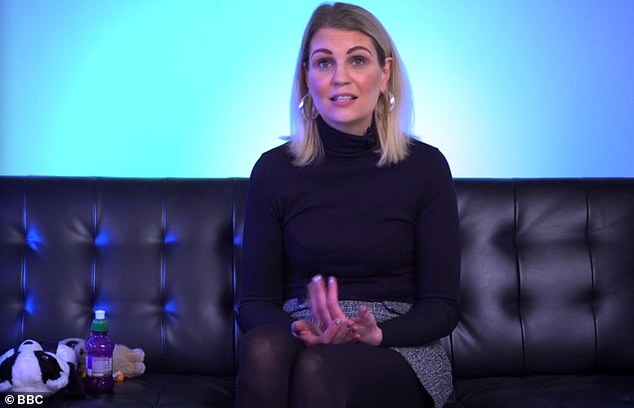 She recalled: ‘I lost out on moments that were really special and that I’d loved to have had. Instead of “It’s a boy or it’s a girl”, it was, “Is our baby alive?”

‘There is absolutely nothing I’d even come across that made me contemplate that me a section might even end up being an option.’

Meanwhile Olivia remembered feeling as though her entire birth plan was focused on a natural birth, saying: ‘It was very much geared towards different sections of labour so when you come into the labour ward, [it’s like], “Has anyone heard of a c-section? 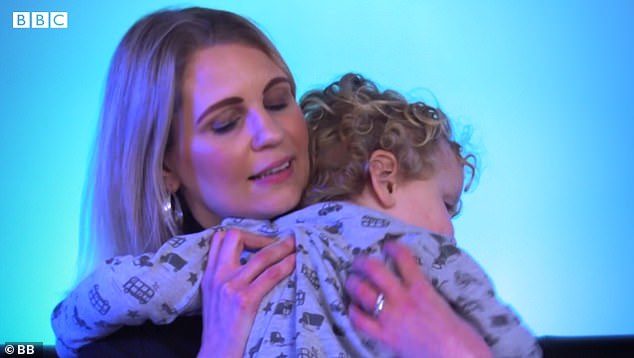 She said she felt as though she had ‘failed’ after giving birth by caesarean and revealed that despite the major surgery ‘no one asked if she was okay.’ 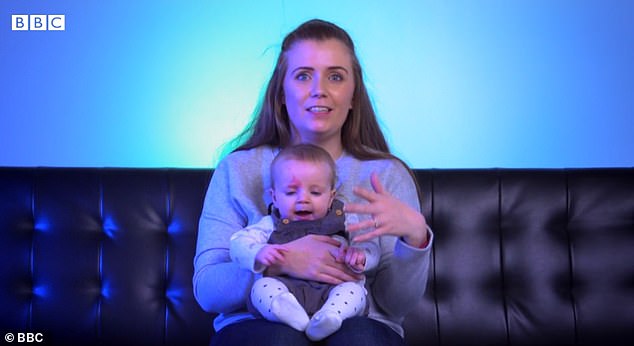 ‘Yeah, C-section is a small cut in your stomach and your baby will come out that way but it won’t come to that.”‘

WHAT ARE THE MEDICAL REASONS FOR A CAESAREAN?

There are various reasons why a doctor may recommend that you have a caesarean section instead of giving birth vaginally.

If you had complications in a previous pregnancy or birth, or in your current pregnancy, you may be advised to have what’s called a planned or elective caesarean, or a planned repeat caesarean.

If you were planning to give birth vaginally, but complications during labour or birth mean that you’re advised to give birth by caesarean, you’ll have what’s called an unplanned or emergency caesarean.

Here are some reasons why doctors may opt for a planned or emergency caesarean, rather than a vaginal birth:

She revealed: ‘Having a natural as possible delivery is what you want because you know that the recovery time is less, and you know you are a goddess of motherland.

‘But yeah, I was not treating as nice when I had a c-section.

‘And then again, it made me feel as though, I have failed, haven’t I? I’ve not done it the way it should be done.’

Dr Annalise Weckesser, who works as a medical anthropologist at Birmingham City University, said she found women who had C-sections felt a need to ‘defend’ their birth to others.

She explained: ‘We did a study with women who had had C-sections recently.

‘We brought them in for focus groups and interviews. What also came out of those conversations was this feeling of guilt.

‘Both elective c-section and emergency c-sections… The stories that were coming from those women is that they would just feel this need to defend against this label that they were “too posh to push”.’

Meanwhile Rachel said she struggled with the thought that her son might have been negatively impacted by his birth.

She said: ‘Things like, if the baby doesn’t go through the birth canal then they are not coated with whatever it is, and therefore it can have an impact on their digestive system.

‘He happens to have a bit of reflux and I’m thinking, “Is this my fault?”

Dr Weckesser said: ‘In the 1940s and 1950s we had quite medicalised births. You think of a male doctor, and you think of a pregnant woman with her back in stirrups and the woman has no say in her birth.

‘And then around the 1960s, we had the natural birth movement that women should be at the centre of the birth and we got fantastic things like birth plans.

‘But I do think there are elements of the natural birth movement that kind of over-corrected some things.

‘And I think what happened is that we forgot for some women, at some times, birth can be a dangerous thing, that it is a bloody business.’

Olivia explained: ‘You see blogs on Facebook where people have written up their birth story and it’s titled, “My dream home drug free water birth”. You never see “My Dream C-section”.’

Dr Annalise Weckesser, who works as a medical anthropologist at Birmingham City University, said she found women who had C-sections felt a need to ‘defend’ their birth to others

Meanwhile Laura said change needed to go further than simple discussions, saying: ‘It doesn’t matter if you tell me not to feel guilty, I am still going to feel guilty so no amount of you saying that to me is going to change how I feel.

‘So let’s just stop saying that to women and lets see how we can help them.’

She continued: ‘Major surgery, and you don’t get a leaflet to tell you how you might feel after that.’

Rachel added: ‘I think the NHS need to make sure women have that support and to make sure they understand what happened to them, why it happened and that actually it’s alright for them not to be okay initially.

Dr Weckesser added: ‘I would say to a woman who has had a C-section and feels guilt, “You are not a failure. Your body did not fail you, you are no less of a woman, you are definitely no less of a mother.”