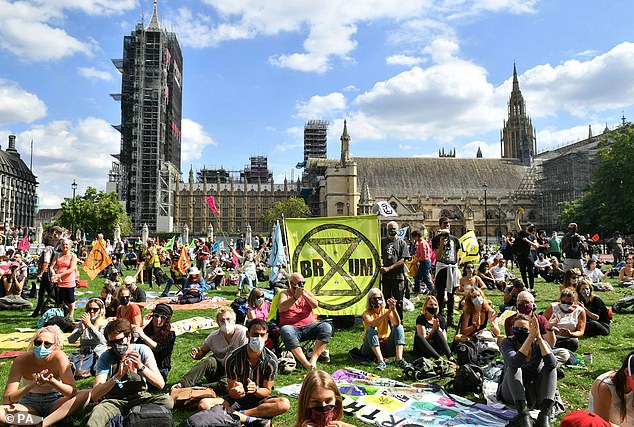 The Black Lives Matter movement is planning to select candidates to contest seats at the next General Election.

Makes sense. Judging by that sinister stab-vests-and-balaclavas march through South London recently, BLM already has a paramilitary wing. A political arm is the logical conclusion.

It will be called the Taking The Initiative Party, or TTIP for short. No doubt it will quickly become known as the Taking The Knee Party, TTKP. (Mail reader Graham Whitmore emails to suggest that TTPP might be more appropriate. Work it out for yourself. I couldn’t possibly comment.)

Sarcasm aside, this development should be welcomed by everyone who favours the democratic process over violent intimidation.

Mind you, direct action seems to be serving BLM quite well for now. They’ve already got the Government, most of the political class, the universities, the police, professional sport, big business and the broadcast media on the run.

Statues are being toppled, streets renamed, curriculums ‘decolonised’, civil servants sent on ‘unconscious bias’ courses. No one voted for any of this, but the Establishment caved in regardless.

Still, if BLM are now prepared to embrace the ballot box they should be encouraged. We’ve had more than enough mayhem on our streets lately. Let’s hope the Extinction Rebellion headbangers get the message, too.

Over the weekend, they laid siege to printing plants, stopping the distribution of national newspapers, while the petrified police stood back and watched — in Hertfordshire, at least.

For six long hours, Herts Plod allowed XR to erect bamboo barriers and glue themselves to the road outside the plant at Broxbourne. They saw their job as not to protect private property, or keep the public highway open, but to facilitate protest.

The assistant chief constable merely expressed disappointment that the demonstrators hadn’t ‘co-operated’ with the cops when officers attempted to negotiate with them. Since a serious criminal act was being committed before their very eyes, what was there to negotiate?

Next time a gang of blaggers, armed with sawn-off Purdeys, robs a bank in Hertford — if they can find one still open — no doubt the Old Bill will give them six hours to make their getaway before opening ‘negotiations’ to retrieve the money. Or share it out on a fair and equitable basis.

At least the Met have raised their game. Not that they could have lowered it any further, after skateboarding with XR protesters bringing chaos to London last summer and looking on as a pink yacht blocked Oxford Circus for five days.

This time, they’ve been handing out £10,000 on-the-spot fines. How many protesters do the politicians think are going to cough up ten grand? Correct, none. And when they are brought before the courts, they will inevitably be released immediately.

The truth is that neither XR, nor BLM, needs to put up candidates for election. MPs are only too happy to comply with their demands, no matter how extreme, rather than be damned as RAY-CISTS! or ‘climate-change deniers’.

Look at the way they all fawned over that preposterous Greta child. And remember Labour leader Max Headroom and his daft deputy being photographed ‘taking the knee’ in deference to Black Lives Matter?

Meanwhile, the rest of us can only look on in bemusement, with mounting frustration and anger as our history is torn down and energy policy is rewritten to appease the ‘climate emergency’ alarmists.

We all want racial harmony and a cleaner, greener planet. But we don’t recognise the deliberately distorted portrait of our tolerant country as a racist hell-hole. Nor do we believe further shutting down our already Covid-crippled economy and taking us back to a romanticised agrarian age is the best way to save the polar bears.

Britain has strict laws against discrimination on the grounds of race, creed, colour and sexual orientation. Parliament has enthusiastically passed some of the world’s toughest targets for cutting greenhouse gases. You can never appease the wilder fringes of XR and BLM. They’ll only keep coming back for more.

Nevertheless, we should applaud any move which subjects them to democratic scrutiny and accountability. That way we would soon gather a reliable measure of their actual support. It’s instructive that the plan to put up BLM Parliamentary candidates was announced at the so-called Million People March — attended by, er, three to four hundred protesters, many of them white. 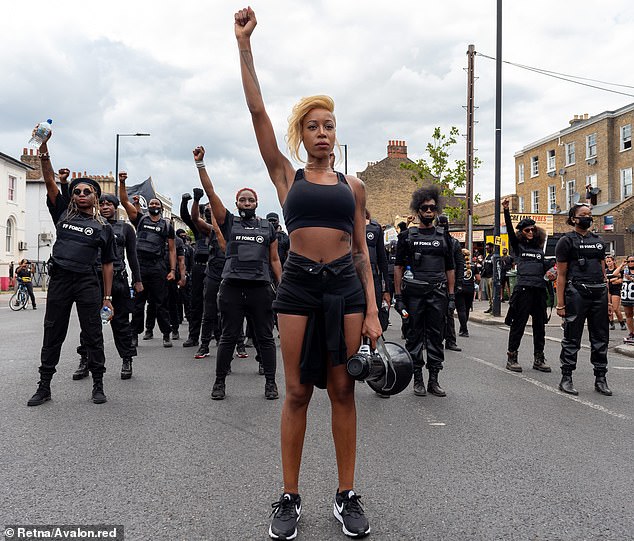 Britain has strict laws against discrimination on the grounds of race, creed, colour and sexual orientation. Parliament has enthusiastically passed some of the world’s toughest targets for cutting greenhouse gases. You can never appease the wilder fringes of XR and BLM. They’ll only keep coming back for more

Similarly, the number of hardline XR demonstrators outside printing plants this weekend could be numbered in dozens, not the thousands who turned out at the height of summer. Perhaps we have passed the high watermark of both movements, especially now the weather is about to take a turn for the worse.

Anyway, XR doesn’t need to go down the Parliamentary route. It’s already got a political party, the Greens, which has a grand total of one MP. At the last General Election, Corbyn’s Labour supported every single demand of both Extinction Rebellion and Black Lives Matter. And we know how that ended — with Labour’s worst defeat since the 1930s.

It has become de rigueur to portray both XR and BLM as sincere, peaceful organisations ‘hijacked’ by the Far Left. As proven by a cursory glance at their stated aims, from defunding the police to smashing capitalism, nothing could be further from the truth.

Despite the publicity their antics attract, they are about as representative of public opinion as the Monster Raving Loony Party.

Yes, plenty of well-meaning, decent people, concerned about genuine racism and the environment, have rallied to their banners. But XR and BLM haven’t been hijacked by the Far Left. They are the Far Left — controlled by the same anarchists, communists and Toytown Trots behind every single agitprop gang of wreckers since the Seventies.

They don’t want to change society, they want to destroy it. Which is why they take to the streets, commit criminal damage and attempt to strangle free speech.

So, when push comes to shove, I wouldn’t put money on either of them putting up legitimate Parliamentary candidates.

They know full well that if they were ever to stand for election, they would not only lose their deposits, they’d lose whatever dwindling credibility they once had. 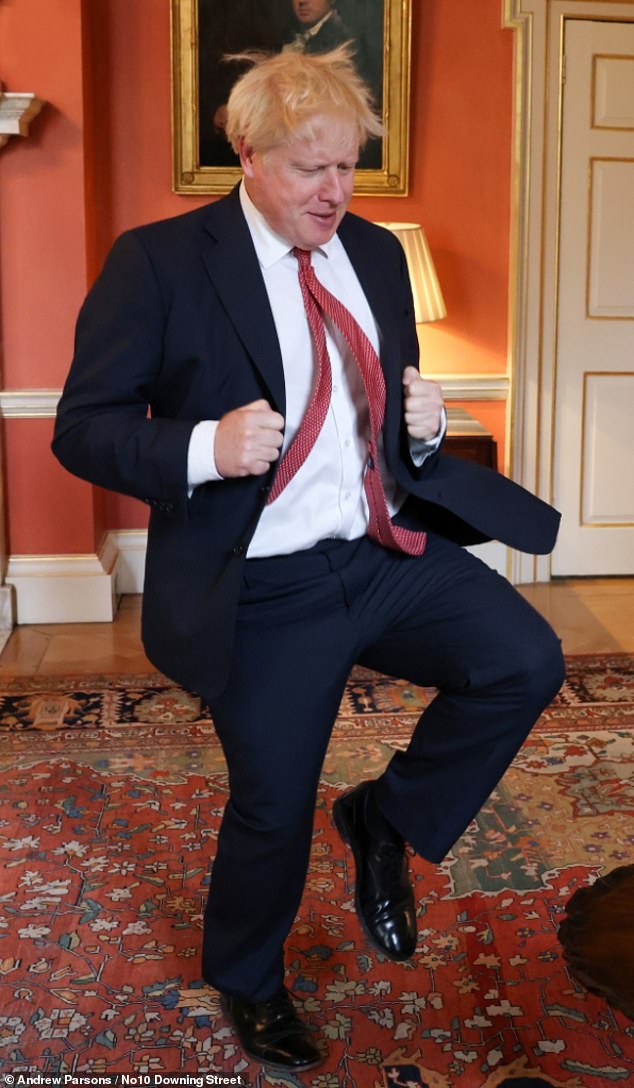 Don’t watch that, watch this! Loved the picture of Boris bouncing up and down on the spot. I haven’t seen dancing like that since the House Of Fun video. Still, Nutty Boy Boris will have to be careful. I know he’s got a personal trainer, but unless he sheds a bit more timber, he could end up One Step Beyond. It won’t be Suggs from Madness he emulates, it’ll be another old ska stomper. Buster Bloodvessel.

Parliament is spending seven grand on training MPs in ‘woke-friendly history’ and avoiding ‘offensive’ language. The lessons will be conducted by consultant Femi Otitoju and a giant Muppet-style blue puppet.

You couldn’t make it up.

Maybe it’s time to hand over the Government to the cast of The Muppet Show? We’ve already got Bozzie Bear in No 10. Why not Fozzie Bear instead?

Prof Bunsen Honeydew could take over as Chief Medical Officer. He even looks a bit like Chris Whitty. And throughout the Covid crisis, ministers appear to have been taking scientific advice from Bunsen’s lab assistant, Beaker.

Gonzo and Animal couldn’t do any worse than Grant Shapps and Matt Hancock at Transport and Health. Priti Flamingo talks a good game, but surely the Home Office is tailor-made for Miss Piggy. She’d sort out the Old Bill with a single karate chop.

We could send Statler and Waldorf to the Lords.

And Kermit the Frog would be perfect for Environment. After all, Kermit knows it’s not easy being green.