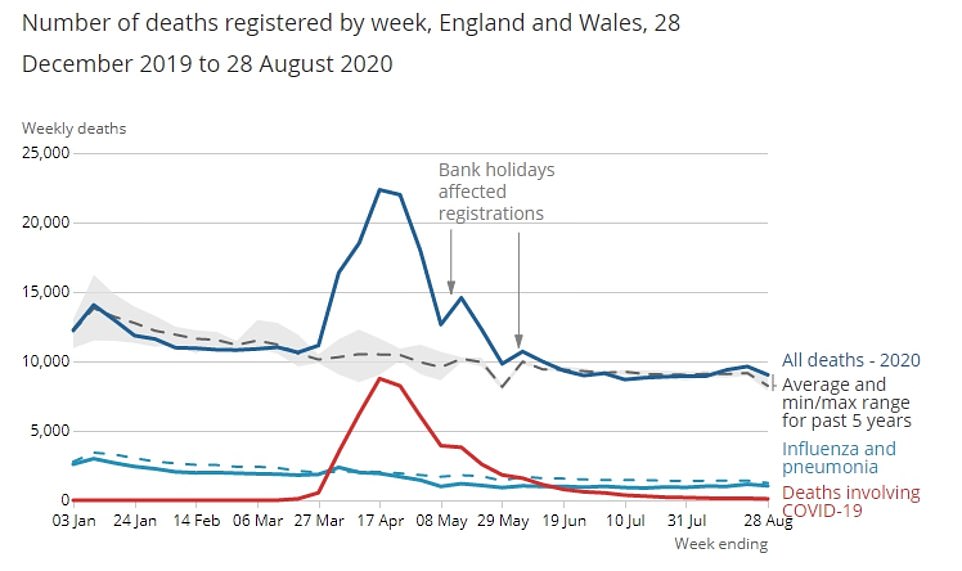 The number of people dying from coronavirus in the UK fell to a 24-week low in the final week of August, official data reveals.

A total of 73 people died from Covid-19 in England and Wales in the week ending August 28, according to the Office for National Statistics. The dip marks a 24 per cent drop on the previous week’s 96 deaths, the first time they fell to single figures since the pandemic began.

It is also a nose-dive from the 8,000-plus deaths a week registered at the peak of the pandemic.

But ONS data shows the total number of deaths in the UK has remained above the five-year average for the third week in a row, at 9.6 per cent over the expected level.

More than 790 additional people are dying in private homes and care homes, while deaths in hospitals remain below the average.

Experts argue this is because many patients are still too scared to seek medical treatment for conditions, while others don’t want to ‘burden’ the health service.

Flu accounted for 14 times more deaths than coronavirus in the last week of August, at 1,040. It marks the twelfth week that deaths from influenza have remained above those from coronavirus. 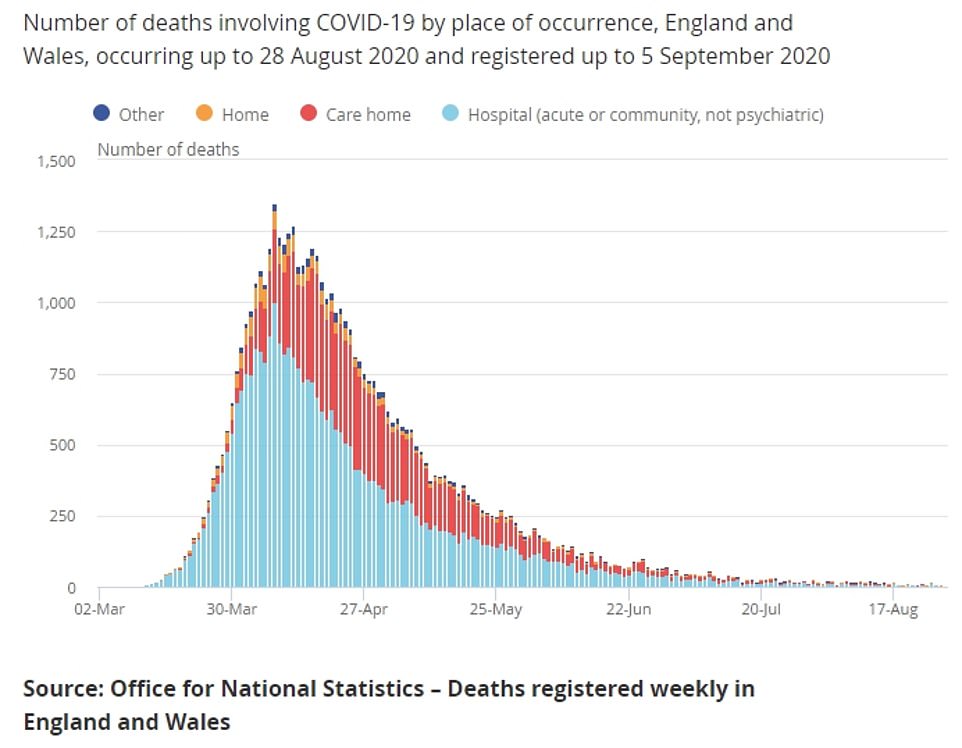 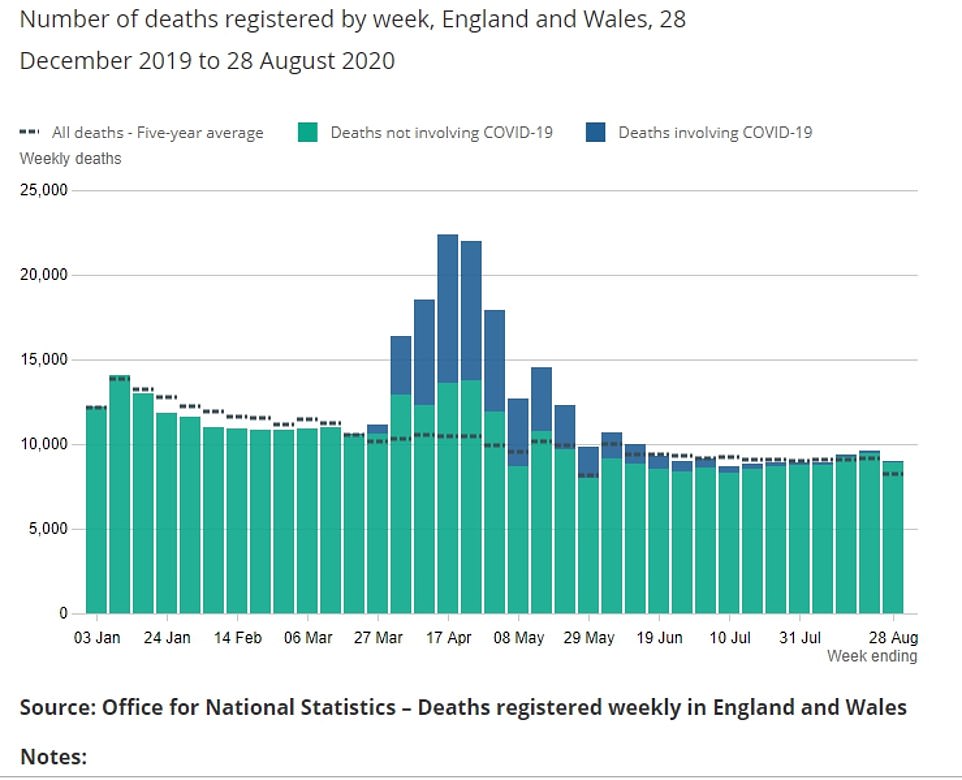 Professor Jonathan Van-Tam has warned that the public has relaxed ‘too much’ over the summer as he predicts a ‘bumpy ride’ for the UK in the weeks ahead.

The country has recorded almost 3,000 new cases for two consecutive days, prompting Matt Hancock to describe the figures as ‘concerning’.

Professor Van-Tam said on Monday that the rising case numbers are also of ‘great concern’, amid fears Britain’s outbreak could get out of control.

Should the number of new infections rise too high the track and trace system will be overwhelmed, requiring new social distancing restrictions to be imposed.

Coronavirus tests can take up to a week to be processed, meaning the spike happened over the August bank holiday.

It is the third week in a row that they have remained above the average, with every region in England and Wales seeing more deaths than expected at this time of year.

The South East suffered the highest volume of excess deaths, with 265 more people dying than statisticians expected, or 21.3 per cent.

Conversely the most deaths from coronavirus were registered in the North West, although this area had the smallest number of deaths above the five-year average.

Of all deaths from coronavirus 63.4 per cent were registered in hospital, 29.6 per cent in care homes and 4.7 per cent in private homes.

The ONS said that while coronavirus ‘did not drive’ the increase it ‘has had a large impact on the number of deaths registered over the last few months and is the main reason for deaths increasing above what is expected’.

‘The disease has had a larger impact on those most vulnerable (for example, those who already suffer from a medical condition) and those at older ages,’ they said.

‘Some of these deaths would have likely occurred over the duration of the year but have occurred earlier because of Covid-19.

Figures published today by the ONS showed that 52,316 deaths involving Covid-19 had occurred in England and Wales up to August 28.

National Records for Scotland said 4,228 deaths from the virus had occurred in the country up to August 28, while the Northern Ireland Statistics and Research Agency said they had suffered 873 deaths from Covid-19 up to August 28.

In the final week of August the UK did not register above 1,600 coronavirus cases a day, with a high of 1,522 recorded on August 27.

The final week of August lies just before the August bank holiday, where it is feared the virus began to spread again as Britons ‘relaxed too much’ and enjoyed the last rays of the summer.

Daily coronavirus cases registered in the UK have almost hit 3,000 for two consecutive days, prompting warnings that the rise is ‘concerning’. 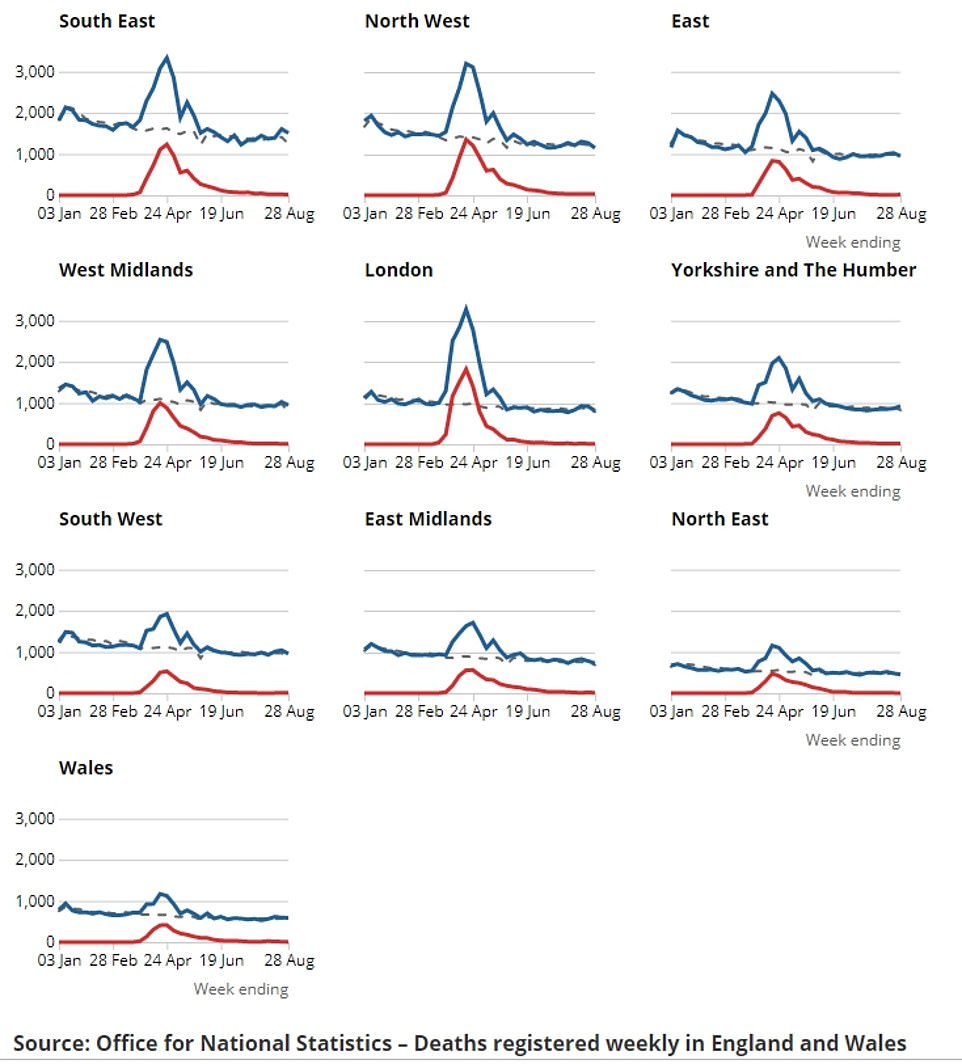 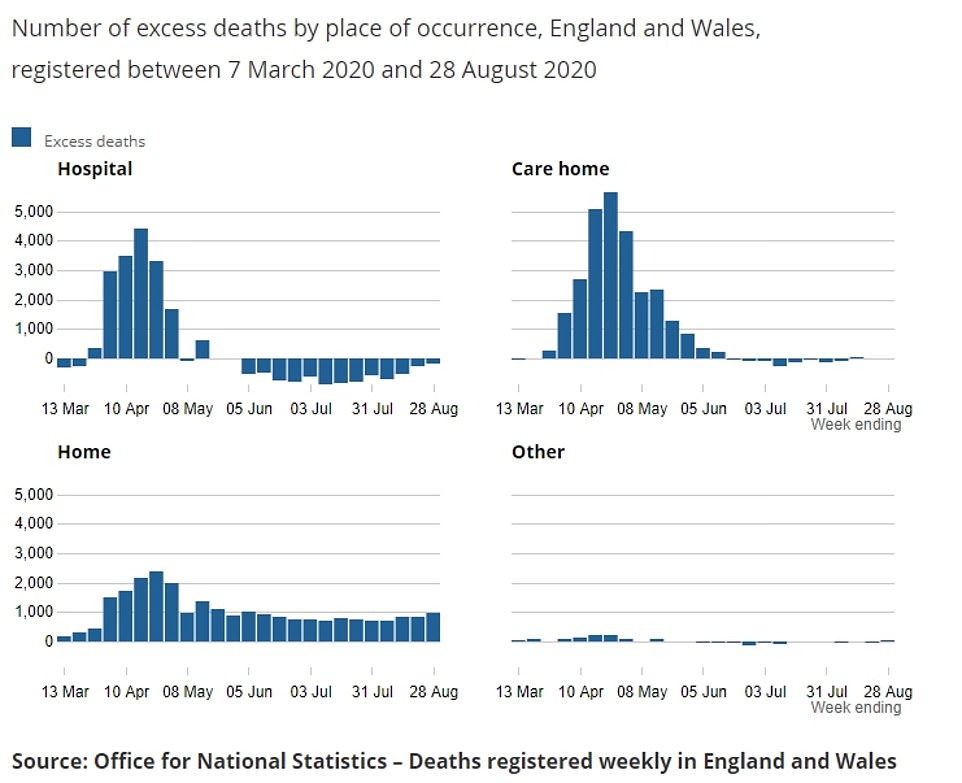 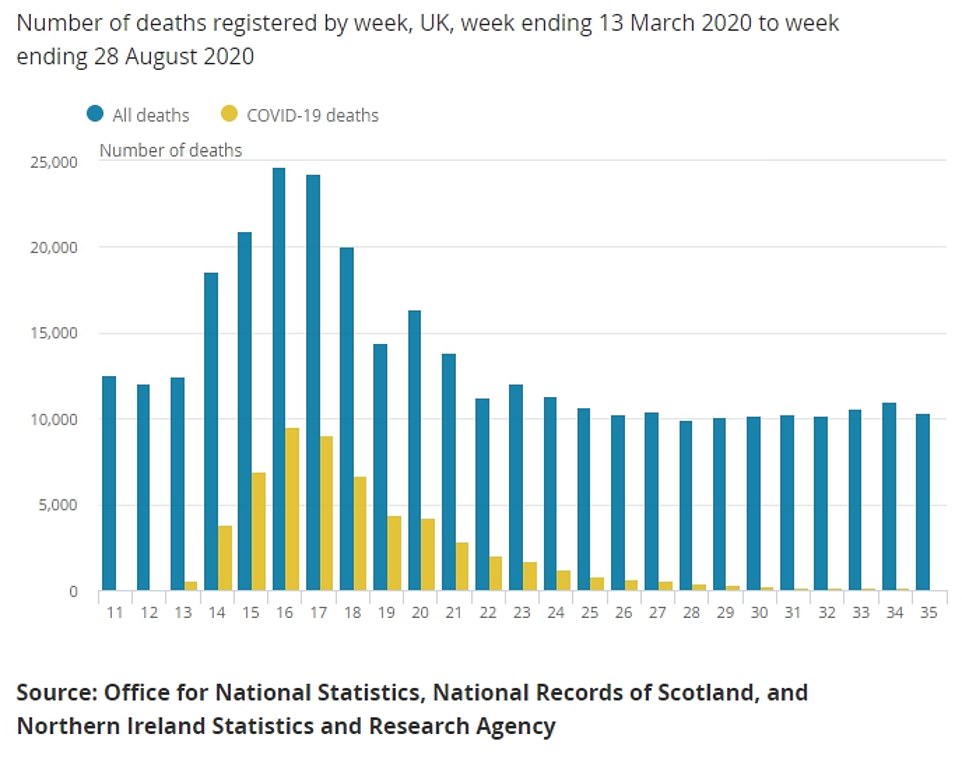 It can take up to a week for coronavirus tests to be processed and have their results reported, meaning the rise may have actually happened around a week ago.

Paul Hunter, associate professor at the University of East Anglia, told MailOnline he expects the death rate may also start going up ‘within the next two weeks’.

An increased rate of new infections may overwhelm the UK’s track and trace system, which would force authorities to re-impose some lockdown restrictions.

The largest outbreak of coronavirus has been registered in Pendle, North West.