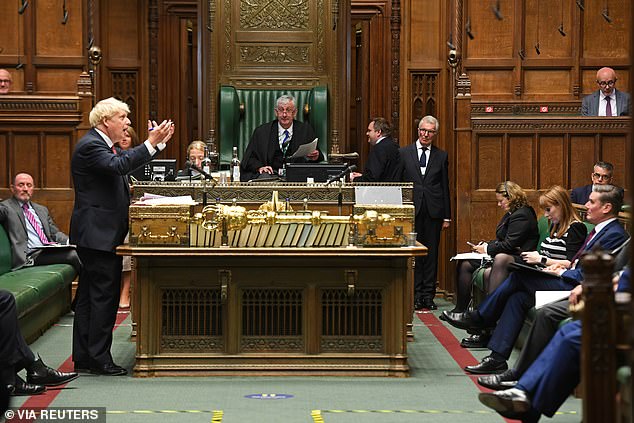 Ministers will take new powers today to fund infrastructure projects in Scotland and Wales despite warnings it will ‘roll back devolution’.

The Internal Market Bill will see Westminster take over the funding and operation of regeneration schemes currently run by the EU.

Sources said this could see ministers pour funding into projects such as the proposed M4 relief road in South Wales, which was rejected by the Welsh Assembly last year on the grounds of environmental impact and cost.

Infrastructure schemes are currently the preserve of the devolved administrations.

The SNP has already warned that any move to change this would be viewed as a ‘power grab’.

Britain’s Prime Minister Boris Johnson speaks during question period at the House of Commons in London, Britain on September 2, 2020. The Internal Market Bill will see Westminster take over the funding and operation of regeneration schemes currently run by the EU

But Government sources pointed out that the funding was not previously under the control of the administrations in Edinburgh and Cardiff.

Cabinet Office Minister Michael Gove said the devolved governments would enjoy a ‘power surge’ after Brexit, adding: ‘No longer will unelected EU bodies be spending our money on our behalf. These new spending powers will mean that these decisions will now be made in the UK, focus on UK priorities and be accountable to the UK Parliament and people of the UK.’

The new legislation will also ensure that the devolved administrations are unable to erect internal trade barriers by imposing different standards for food and other goods after Brexit, when EU laws governing the issues will lapse.

A new independent Office for the Internal Market will police disputes. 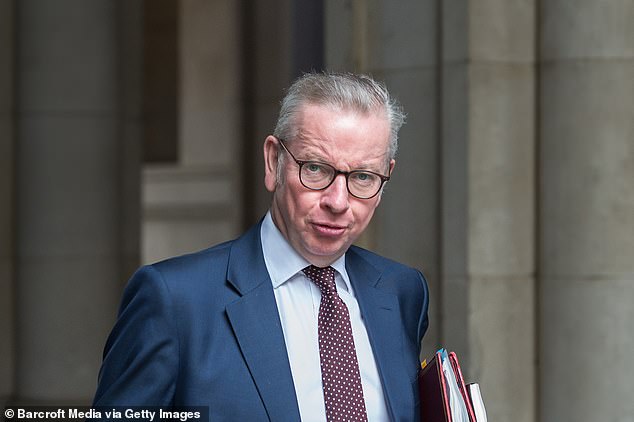 Chancellor of the Duchy of Lancaster Michael Gove returns to Downing Street in central London after attending Cabinet meeting temporarily held at the Foreign Office to comply with social distancing guidelines due to the ongoing coronavirus pandemic yesterday in London, England

Business Secretary Alok Sharma said: ‘For centuries the UK’s internal market has been the cornerstone of our shared prosperity, delivering unparalleled stability and economic growth across the Union.

‘Today’s Bill will protect our highly integrated market by guaranteeing that companies can continue to trade unhindered in every part of the UK after the Transition Period ends and EU law falls away.

‘Without these necessary reforms, the way we trade goods and services between the home nations could be seriously impacted, harming the way we do business within our own borders.

‘Now is not the time to create uncertainty for business with new barriers and additional costs that would trash our chances of an economic recovery.’

The legislation will also formally confirm that responsibility for state aid subsidies to struggling industries lies with Westminster, not the devolved governments.

Government sources denied that the changes amounted to a power grab, saying that dozens of powers previously overseen by the EU would now be held in Edinburgh, Cardiff and Belfast.

Areas of devolution include air quality, energy efficiency and elements of employment law. No powers currently held by the devolved administrations will be clawed back.