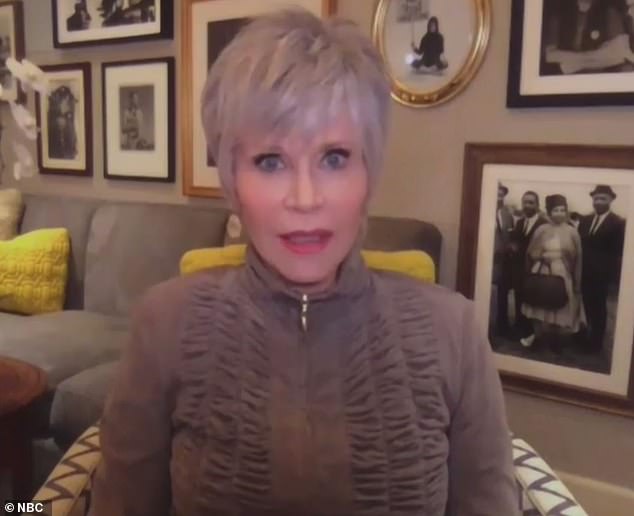 Jane Fonda revealed during a visit Tuesday on Late Night With Seth Meyers that she plans to make virtual visits to book clubs across the nation.

The 82-year-old actress starred in the 2018 hit film Book Club and recently met up online with her co-stars, Mary Steenburgen, 67, and Candice Bergen, 74.

Jane explained that as long as someone gave her a ‘good reason,’ she might just show up to their book club, but, virtually, of course, due to concerns around coronavirus.

Virtual visits: Jane Fonda revealed during a chat show visit Tuesday that she plans to make virtual visits to book clubs across the nation

The Oscar-winning actress noted that there were five million US book clubs, and promised to send those she met a signed copy of her new book, What Can I Do? My Path From Climate Despair To Action.

All proceeds were being donated to Greenpeace, she explained, and interested book-club members could sign up to meet her at greenpeace.org.

Jane looked elegant as she spoke to Seth, 46, from her home, sporting close-cropped gray hair, a chic zipped-up jacket and gold earrings, and sitting in front of a vase of orchids.

She had enjoyed her reunion with Mary and ‘Candy’ a few days ago, she recalled. 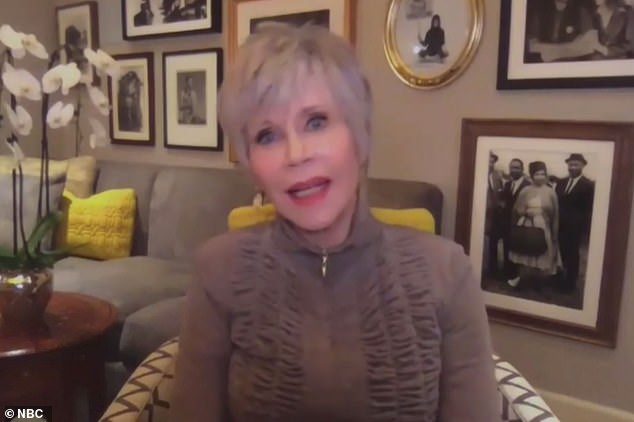 New book: The 82-year-old actress was promoting her new book, What Can I Do? My Path From Climate Despair To Action

‘That’s one of the great things about being an actor. You get to know these people that are so interesting and fun,’ she said. ‘Diane [Keaton] was on her way to Arizona to buy another adobe house to change it up. She’s so good at that.’

Each chapter of Jane’s newest book focuses on a different aspect of the climate crisis, with a note at the end called ‘What Can I Do?,’ which gives readers suggestions to aid change.

The climate has been a concern of Jane’s for years, and for the last six months, she’s been hosting Fire Drill Fridays, which get people involved in advocating for environmental change. 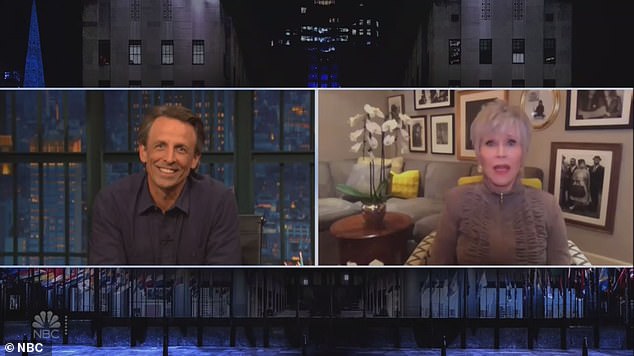 She told Seth that she’d been inspired to get involved when she heard that not enough older people were fighting to raise awareness of the climate crisis.

‘I said, ”Well, I’m going to answer the call, an aging movie star”,’ she recalled. ‘I’ll bop in there, and I’m going to try to make a difference and try to alert people to what’s happening.’

Her virtual Fire Drill Fridays drew 3.5 million people in July and August, and tens of thousands of others have signed up and are volunteering to register voters, she marveled. 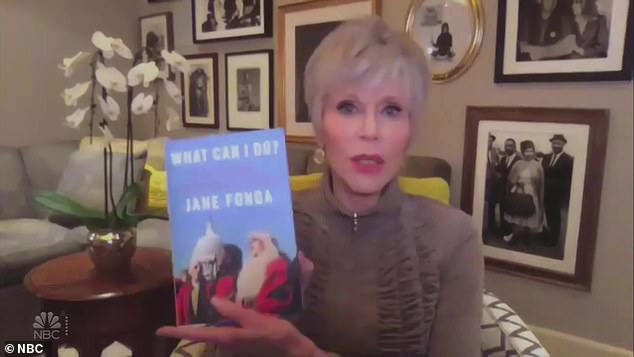 Getting involved: Jane told Seth that she’d been inspired to get involved when she heard that not enough older people were fighting to raise awareness of the climate crisis

‘When I was young, I thought that activism was a sprint, if I just go fast enough, everything can be fixed really quick,’ Jane said. ‘And then I got a little older, and I realized that activism is like a marathon, and I learned to slow down and pace myself.’

‘Now that I’m seriously old,’ she went on, ‘I realize that it’s really a relay. It’s a relay race. You pass the baton.’

Jane already has been arrested five times while protesting on Fire Drill Fridays. 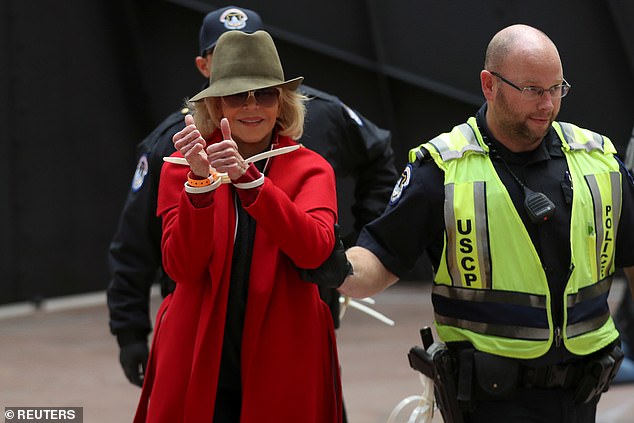 Multiple arrests: The Oscar-winning actress, shown being arrested in November 2019, has been arrested five times while protesting on Fire Drill Fridays

In the 1970s, while Richard Nixon was the US president, she was also arrested.

‘I flew from Canada into Cleveland, Ohio, and they arrested me at the border and took all my vitamin pills and said they were drugs,’ she recounted. ‘And took all my books and papers and address books. The arresting officer said he was working on orders from the White House.’

Jane said that lately she’d started engaging in acts of civil disobedience because it felt like the next natural step after 40 years of fruitless ‘petitioning and protesting and marching.’

‘History has shown that civil disobedience is what changes history,’ she noted. ‘There are so many people in this country that know that there’s a climate crisis, and that it’s caused by humans, and they want to do something but they don’t know what. Thirteen million of them said they would do civil disobedience, but nobody’s asked. So we’re asking.’ 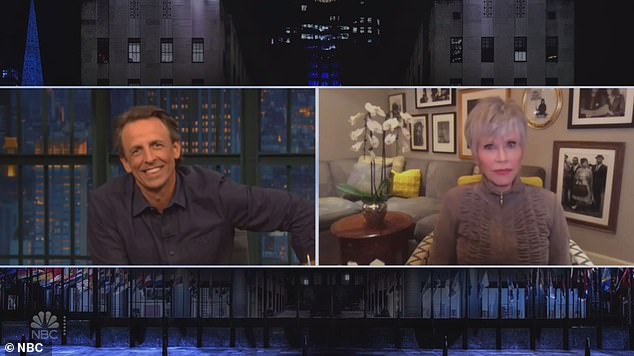