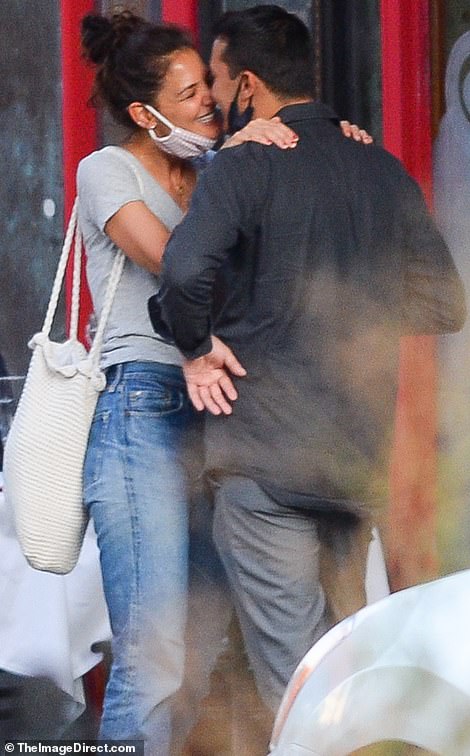 Katie Holmes is certainly making a meal out of her new relationship with chef Emilio Vitolo Jr.

Once again, the ex-wife of Tom Cruise was pictured packing on some serious PDAs with Emilio, 33, at his father’s famous Nolita restaurant, Emilio’s Ballato, which is frequented by stars including Whoopi Goldberg, Bradley Cooper, and even Barack Obama.

The pair were spotted at the New York City establishment on Tuesday, passionately kissing one another in public, as it appeared the chef’s father Emilio Vitolo sat close-by, proving that she’s already well in with the family.

His omnipresent father is known to sit outside or at the front of his famed eatery, quietly determining who gets a seat and in which order. Hopefully Katie will have no issue getting a reservation. 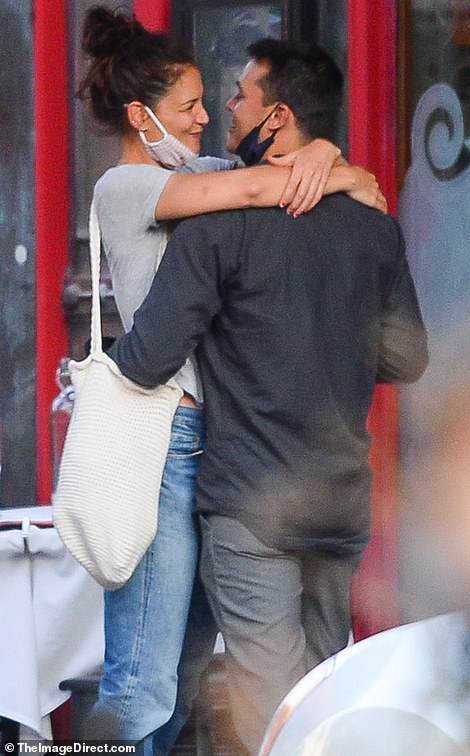 The look of love! Katie Holmes and new boyfriend Emilio Vitolo Jr. pack on some serious PDAs at his father’s famous Nolita restaurant, Emilio’s Ballato, which is frequented by stars including Whoopi Goldberg and Bradley Cooper 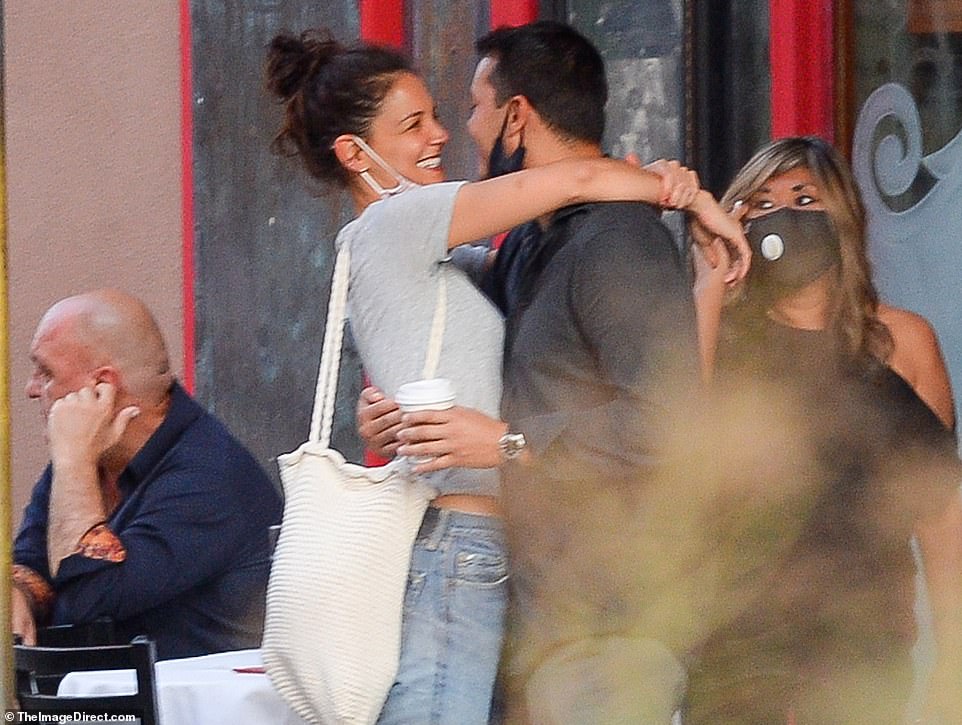 Don’t look dad! Emilio’s father, restaurateur Emilio Vitolo, appeared to be averting his eyes as he sat to the left of the new couple

However, it seemed as though the restaurateur was forced to avert his eyes as his young son was kissing Katie in full view.

Katie, 41, looked overjoyed to be in the company of her younger lover, as she was grinning from ear to ear while they both gazed at one another with their face masks pulled down.

For the romantic embrace, Katie was dressed casually in light blue jeans and a tight-fitting grey top, while Emilio went simple in a pair of dark jeans and a navy shirt. 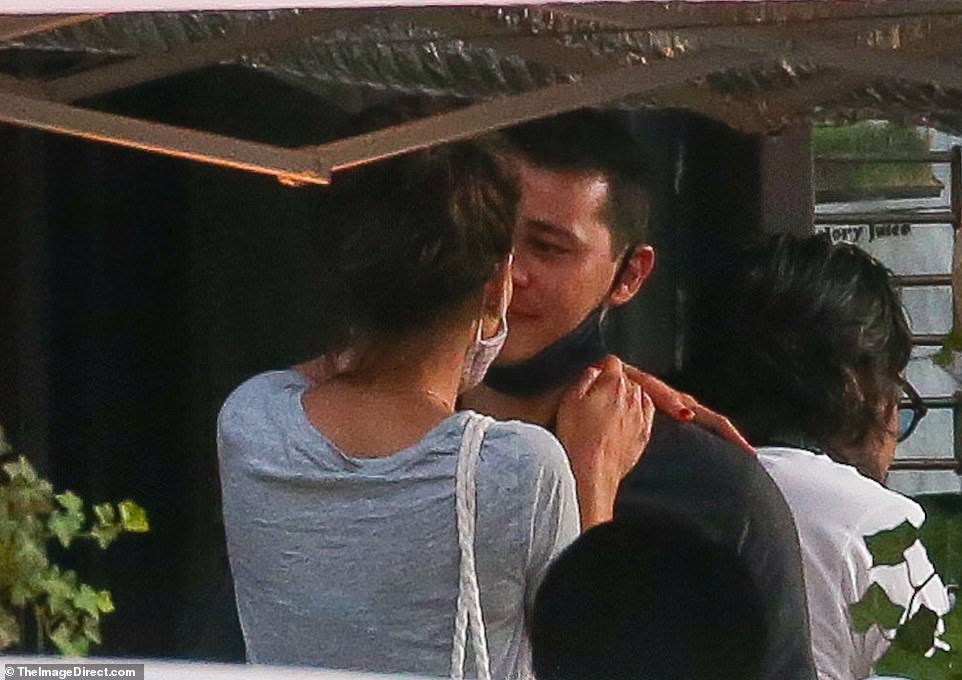 Holding his gaze: Emilio looks lovingly at the Dawson’s Creek actress as they embrace outside in NYC

Can’t get enough! There’s no hiding the fact that Katie seems smitten with Emilio 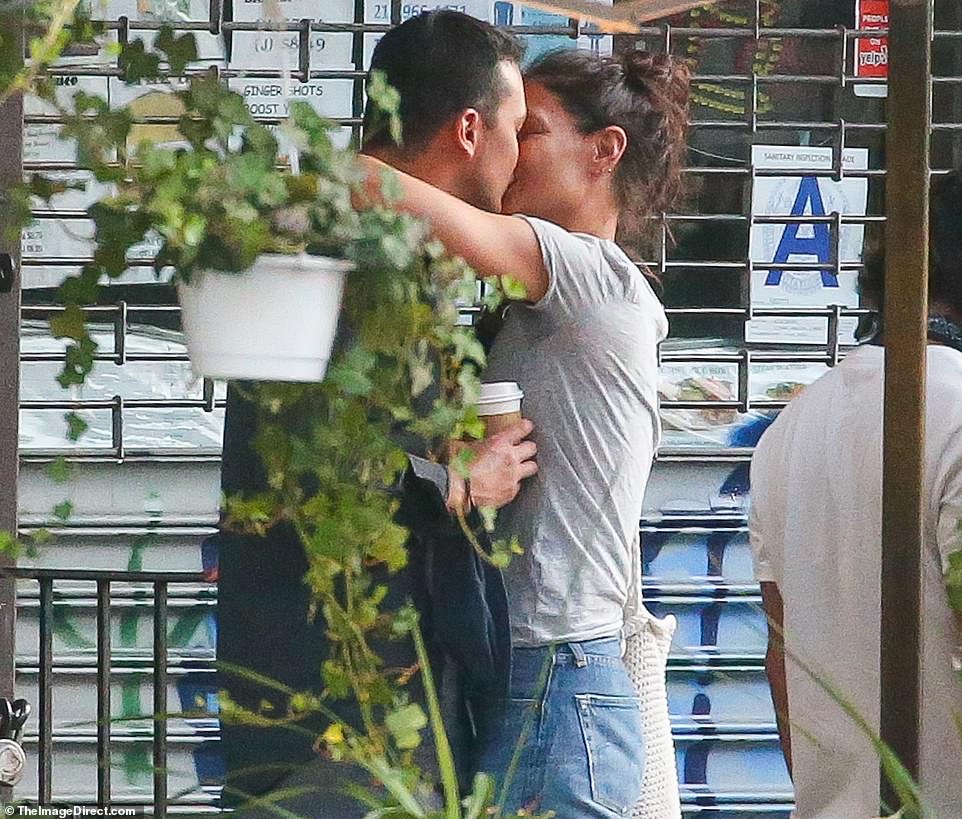 Planting a smooch: Katie leans over for a passionate kiss while the young chef holds on to his coffee 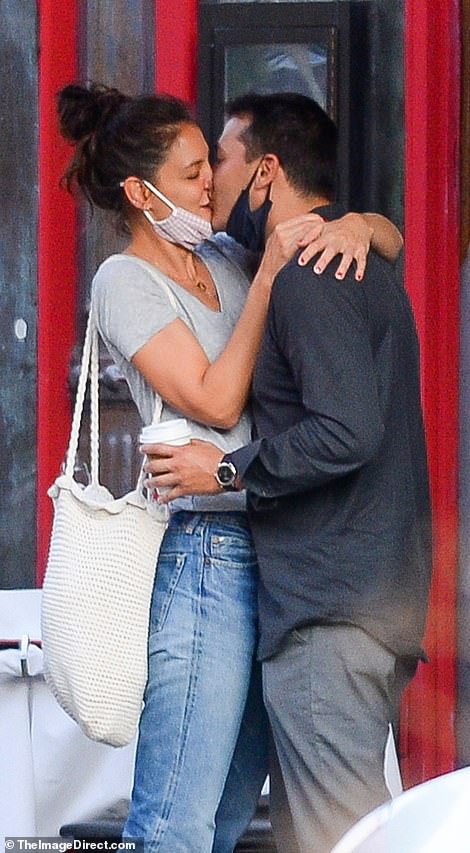 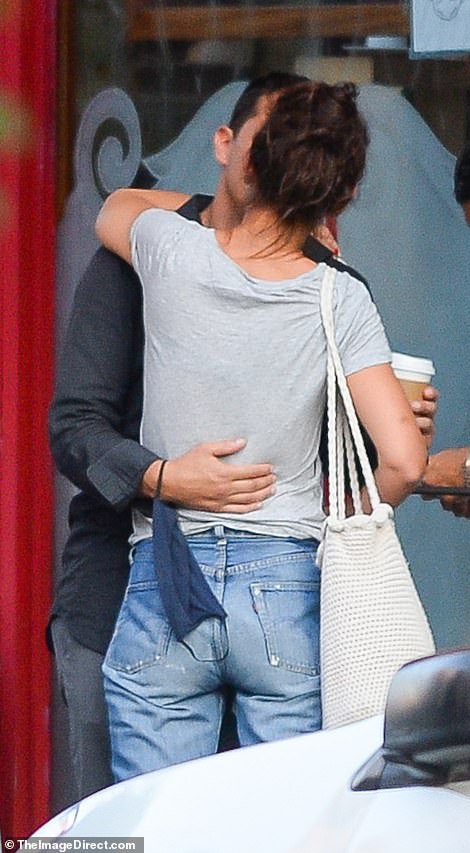 She’ll take this one to go! The Dawson’s Creek star did not want to let go of her man 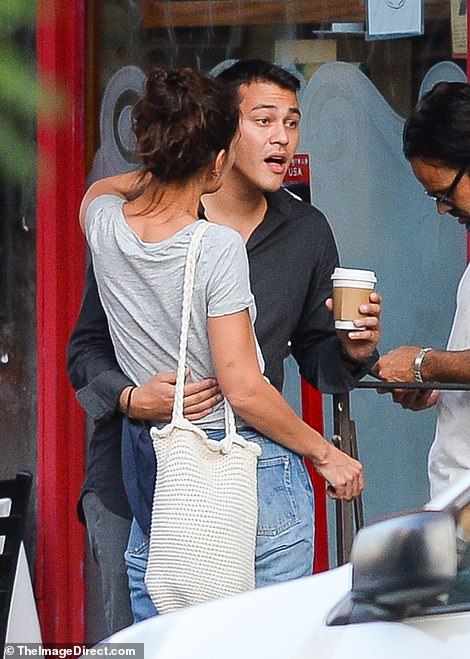 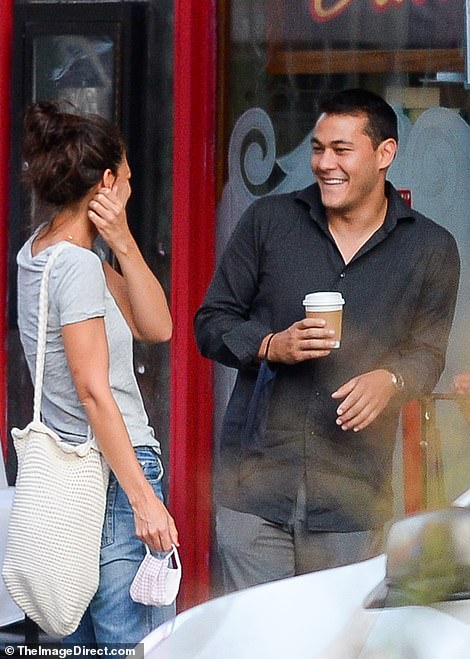 Coming up for air! The pair spent most of their time smooches outside the restaurant where the chef works

It’s certainly a surprise to see the actress put on such a public display of affection, as she has previously been notoriously private about her personal life.

The Mad Money actress was wed to Tom Cruise from 2006 to 2012. During that time they had daughter Suri, now 14, who is often seen accompanying mom around the Big Apple.

After that Katie began dating Jamie Foxx, who she was first linked to in 2013 when the pair was seen strolling hand in hand through Malibu.

The pair never officially confirmed they were dating and by 2019 reports of a split began to emerge.

At the time insiders told People that the relationship had run ‘its course,’ explaining: ‘This industry is very tough on relationships.’

They went on to say there were no bitter feelings between the pair, who simply grew apart.

‘Jamie thinks Katie is an incredible human being. They had a very, very deep connection,’ the source said.

‘They brought each other a lot of joy and laughter,’ the insider continued about the pair, who were last seen together at the Met Gala in May of 2019 – their first and last red carpet as a couple.

‘It’s a seven-day-a-week commitment. If you’re going to do a restaurant the right way, you always have to be there.’ he told InStyle recently.

‘But on Sundays my father was never the cook. My mother, who’s from Peru, would make us dishes like chicken and rice instead,’ he said.

It’s unclear when he and Katie met or started their romance.

Until July, he appeared in social media pictures with Rachel Emmons, a designer at Anna Rachel Studio.

He is one of three brothers; Anthony, 29, also works in the kitchen and is married. Little is known of the other brother.

Their father has watched over the restaurant since the early 1990s. He is adored by his famous clientele.

In an interview with The New York Times in 2011, Lenny Kravitz said of him: ‘He’s all love.

‘I used to live on Crosby Street, right around the corner, and there were nights when I was sick, and it was raining, and I was hungry, and the dude cooked me food and walked it over himself.’

Kravitz paid for a new awning for the restaurant out of gratitude.

Neither he nor Emmons responded to DailyMail.com’s inquiries on Tuesday morning and it’s unclear when their romance ended.

The family have a home in Wantagh, on Long Island, and they also live in various apartments around Manhattan.

He and Holmes first sparked rumors of romance when they were spotted on September 4 dining out.