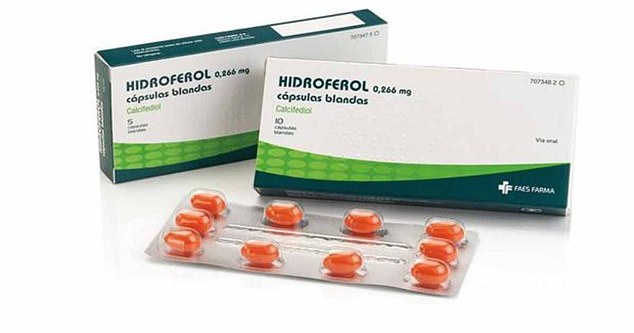 Treating coronavirus patients with high doses of vitamin D supplements could help keep them out of intensive care, a study has suggested.

Researchers gave high doses of calcifediol – a type of vitamin D supplement – to 50 patients hospitalised with Covid-19 in Spain.

They were given 1mg of the supplement over the course of a week, with 0.532mg on the first day and then two booster doses of 0.266mg on days three and seven. The dose was 14 times higher than the safe weekly limit recommended by the NHS.

Scientists compared the participants’ health with 26 volunteers in a control group who were not given the tablets, which are normally prescribed to patients with thyroid or kidney problems.

Just one patient given calcifediol fell ill enough to be admitted to intensive care, whereas half of the participants in the control group were taken to ICU and two died.

There were no deaths among volunteers receiving the vitamin and all 50 patients were eventually discharged by the end of the study.

Experts now believe Covid-19 causes a catastrophic build-up of a chemical called bradykinin, which makes blood vessels leaky and drives up the risk of inflammation.

Calcifediol is one of the few hormones which regulates the bradykinin and it can also prevent the immune system from going into overdrive.

Researchers have been divided over whether a vitamin D deficiency, which is vital to the immune system, can raise the risk of dying of Covid-19. Some scientists suggested that it may be one of the reasons black people face a higher risk of dying from the illness, because they do not produce as much of the vitamin naturally.

Taking too much vitamin D can cause bone and organ damage over time, however, and scientists discouraged people from trying to self-medicate.

Calcifediol – a type of vitamin D supplementation – appeared to slash the risk of a Covid-19 patient needing intensive care when it was given in huge doses, a study in Spain found (stock image of the drug)

For the study, researchers from the University of Cordoba in Spain and research university KU Leuven in Belgium monitored 76 hospital patients with Covid-19.

Fifty of the patients were randomly assigned to have calcifediol tablets, along with normal care.

Twenty-six volunteers were put in a control group who only received standard care, to compare the treatment to.

Because the study was conducted several months ago, the standard care for coronavirus in Spain was hydroxychloroquine and azithromycin. These two drugs have since been proven ineffective at treating the virus.

The NHS recommends people do not take more than 70 micrograms of vitamin D a week, because it warns it can cause bone and organ damage over time.

BAME people may face a higher risk of dying from the coronavirus because they are more likely to have a vitamin D deficiency, scientists claim.

The pandemic is seeing higher rates of people from black, Asian and minority ethnic backgrounds dying if they catch the coronavirus.

The reasons are still unknown and will likely be numerous and complicated. But some experts think a lack of vitamin D may play a role.

People with darker skin need to spend more time in sunlight in order to get the same amount of vitamin D as a person with lighter skin.

For this reason, the NHS suggests people with an African, African-Caribbean or south Asian background could benefit from take a daily supplement throughout the year.

Vitamin D may have a protective effect against severe coronavirus by regulating the immune system, and deficiencies of it have been linked to other respiratory viruses.

However, the largest study to investigate the link between BAME, Covid-19 and vitamin D in a UK population found no proof.

William Henley, a professor of medical statistics at University of Exeter, told MailOnline the link is worth exploring.

‘In the UK and northern European latitudes, vitamin D deficiency is a public health concern because ultraviolet B (UVB) radiation is of insufficient intensity for vitamin D synthesis during winter months.

‘This is a particular concern for people with dark skin, such as those of African, African-Caribbean or south Asian origin, who will need to spend longer in the sun to produce the same amount of vitamin D as someone with lighter skin.’

Calcifediol is hormone produced in the liver in reaction to vitamin D being absorbed by the body. Directly giving people calcifediol skips the process where the body converts the vitamin into the hormone.

Scientists behind the paper, published in the Journal of Steroid Biochemistry and Molecular Biology, are now calling for calcifediol to be prescribed to all Covid-19 patients with lung damage.

Professor Jose Manuel Quesada Gómez, one of the authors of the study, told ThePrint: ‘Vitamin D3 is converted by the liver into calcifediol. However, by directly administering calcifediol instead of vitamin D3, levels of the hormone in the blood are rapidly restored.

‘It also has a more reliable intestinal absorption. This means the calcifediol is more likely to be absorbed by the body than vitamin D3.’

However, critics said the results were not definitive, despite being ‘interesting’.

Dr Satyajit Rath, from the Indian Institute of Science Education and Research (IISER) in Pune, said: ‘It is an extremely small group of patients. It does not identify the degree of severity of Covid-19 in the patients at admission, and does not provide any details of their clinical progress other than ICU admission and death.

He also picked holes in the methodology, pointing out that the study did not specify the co-morbidities that the trial patients were suffering from.

The researchers instead chose to lump all comorbidities together, giving them an equal risk factor for Covid.

This, we know, is not the case with the virus. For instance, an obese patient is more likely to succumb to the infection than someone with a psychiatric disorder.

The study also does not identify what comorbidities, if any, the patients admitted to the ICU had, Rath said.

‘In such a small group, the small differences between the two groups could be enough to skew the results,’ he added.

Professor SP Kalantri, director of medicine at the Mahatma Gandhi Institute of Medical Sciences in Maharashtra, India, pointed out other flaws in the study findings.

He noted that researchers did not measure vitamin D levels before or after administering the drug.

The professor also claimed that ICU admission was not a good scientific measure of disease severity, because the threshold for admission varies wildly between countries, hospitals and doctors.

‘What matters is progression of disease, measured in most clinical trials by an ordinal scale that asks if the patients required oxygen, high flow nasal oxygen, mechanical ventilation or died,’ he said.

The researchers behind the Spanish study said they were putting together larger clinical trials to test calcifediol in more stringent studies.

Vitamin D is thought to stop Covid-19’s nasty symptoms by stopping the build-up of a chemical called bradykinin, which helps regulate blood pressure.

This leads to a catastrophic accumulation of the chemical, causing a ‘bradykinin storm’ which makes blood vessels leaky and drives up the risk of inflammation, blood clots, strokes and brain damage – deadly symptoms observed in the sickest of patients.

As bradykinin accumulates in the body, it makes the protective walls around blood vessels less waterproof and more likely to leak.

This causes immune cells to leak into vital organs like the lungs, causing deadly inflammation – a useful recovery process when well controlled – that makes it hard to breathe.