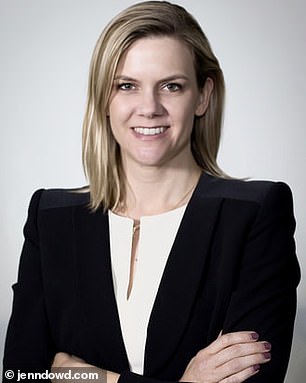 An Oxford epidemiologist has backed up South Dakota Governor Kristi Noem in her skepticism of the widely disputed Sturgis study that claimed 266,000 people were infected with COVID-19 from the single motorcycle rally, saying it is full of assumptions that do not stand up.

Jennifer Beam Dowd wrote in an article for Slate on Friday that the study by IZA Institute of Labor Economics was not to be trusted because it relies heavily on comparing the number of COVID cases in the hometowns of people who attended Sturgis, and towns where none of the residents attended, but doesn’t take into consideration any other differentiating factors between them.

It also offers no proof or suggested proof of how the disease spread so quickly from people who attended the rally to those who did not, nor does it address that people will have spent different amounts of time in Sturgis before leaving.

THE MAJOR FLAWS WITH GERMAN STUDY, PER OXFORD EXPERT

1) It compares COVID-19 numbers between counties that sent people to the rally and counties that didn’t, assuming that that is the only difference between them

3) It assumes that people who attended it went straight home to the counties where the COVID-19 numbers were counted when in fact, they may have traveled more and likely did if they were all motorcycle enthusiasts

5) There is simply not enough time since the rally ended and between the study’s publication for all those people to have become infected, traveled home, passed it on and for all of these infections to have been reported in official numbers – which require tests

Beam Dowd says there is not enough time for that many people to go to the rally, become infected, travel home, infect others and for the results to show up.

The 10-day event took place between August 7 and August 14 in the town of Sturgis, which has a native population of just 7,000 people.

If the study was accurate, it would have meant that 20 percent of the 1.4 million new cases of coronavirus reported between August 2 and September 2 came from the rally.

‘The Sturgis study essentially tries to re-create a randomized experiment by comparing the COVID-19 trends in counties that rally-goers traveled from with counties that apparently don’t have as many motorcycle enthusiasts.

‘While this approach may sound sensible, it relies on strong assumptions that rarely hold in the real world. For one thing, there are many other differences between counties full of bike rally fans versus those with none,’ she said.

There are more differences between counties, she wrote, than the fact that some sent people to the rally and some didn’t, like geographic, social or economic factors.

‘The assumption assumes that every county was on a similar trajectory and the only difference was the number of attendees sent to the Sturgis rally.

‘When this assumption is violated, the resulting estimates are not just off by a little—they can be completely wrong. This type of modeling is risky, and the burden of proof for the believability of the assumptions very high,’ she wrote.

It also says that the authors of the study assume that a high number of COVID-19 cases came as the result of people returning from the rally and spreading it without evidence.

‘Basically, the authors don’t outline what transmission on this scale would have to look like to reach 266,796 infections,’ she said.

They do not explain how their numbers work when many at the rally will have arrived at different times during the days it happened, or that they will have spent different amounts of time there.

‘Given the staggered arrivals (traffic flow data show that about 50,000 showed up per day) and incubation period (roughly five days), it seems likely that those infected at arrival could only have infected on average one or two new “generations” of infections during the rally itself. 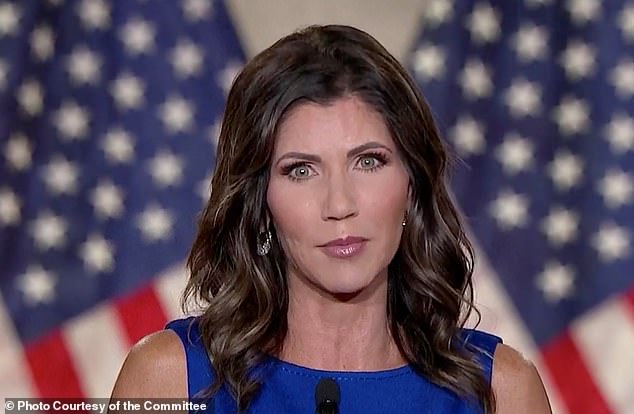 Gov. Kristi Noem (pictured) claimed that infection stats showing a motorcycle rally could have caused 250,000 new Covid-19 cases are ‘made up’ 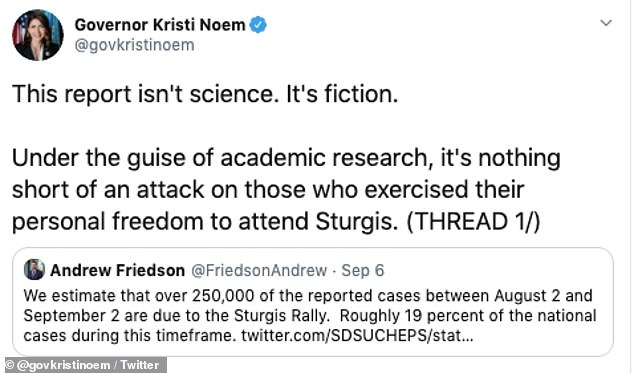 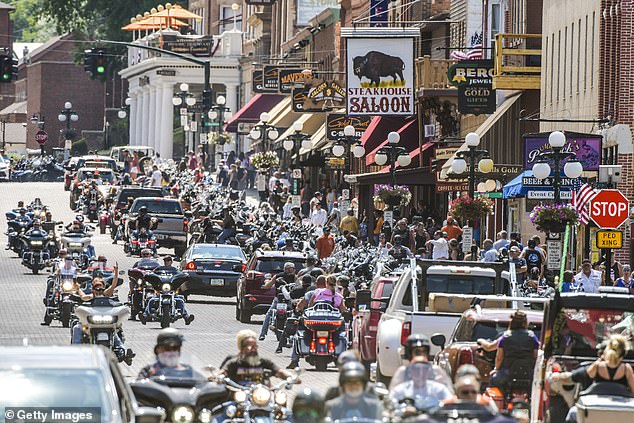 Nearly 20 percent of all the new 1.4 million cases of coronavirus reported between August 2 and September 2 can be traced back to the Sturgis Motorcycle Rally held in South Dakota last month, economists say 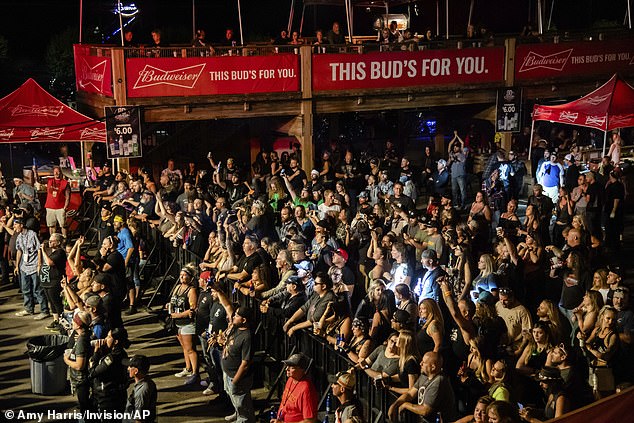 ‘Even with a bleak assumption that 1 percent of attendees arrived already infectious (spread over 10 days) yet well enough to ride motorcycles to South Dakota, and of them were “superspreaders,” passing their infection along to another 10 people, back-of-the-envelope math makes it hard to get in the ballpark of this number of infections that could have happened at the rally,’ Beam Dowd wrote.

She also points out that many of the people who attended the rally would not necessarily have gone straight home, thus making it even less likely that they were the source of infections.

‘Let’s recall this was a motorcycle rally, so many attendees almost certainly didn’t fly home as soon as possible. High numbers of people came from California, Nevada, and Florida, so we can assume the return trip home took at least a few days for those heading home directly.

A diagram shows where Sturgis rally attendees came from prior to the event, according to cellphone data

‘The lure of the open road in August after months of worldwide lockdown may have even induced many riders to take a meandering path home.

‘In short, it is a stretch to believe that so many infected riders could have gotten home in the short time frame required to infect others, incubate, get tested, and have these infections show up in county statistics by Sept. 2, just two weeks after the conclusion of the rally,’ she wrote.

‘Since attendees hardly had time to attend the rally, get infected, and then bike home and infect others, the fact that rates in large sending counties are higher than those for non-sending countries strongly suggests that these differences in trends were in the works anyway due to local transmission dynamics, and not a direct result of the rally,’ she went on.

Gov. Kristi Noem, a Republican, dismissed the findings by the German think tank, saying they had ‘made up some numbers and published them.’

Later, she tweeted: ‘The report isn’t science. It’s fiction. Under the guise of academic research, it’s nothing short of an attack on those who exercised their personal freedom to attend Sturgis.’