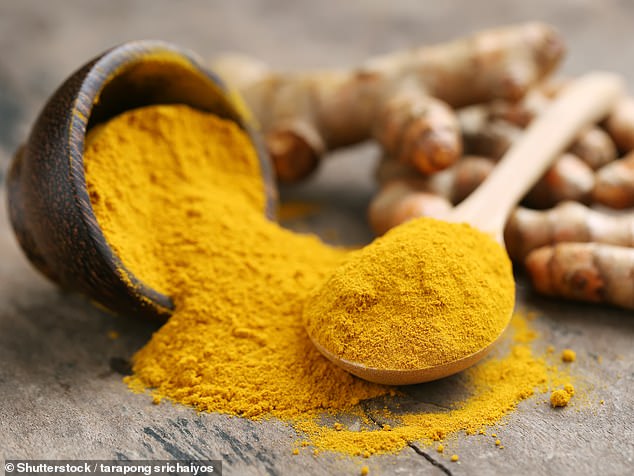 Could TURMERIC fight off the pain of arthritis? Scientists reveal the yellow spice is more effective than a placebo at relieving knee pain

By Ben Spencer Medical Correspondent For The Daily Mail

It is the latest health fad – present in everything from soy lattes to vegan cakes.

But there may be something in the health craze for turmeric after all.

A scientifically robust study, published in a respected medical journal, has found that the yellow spice may be an effective painkiller for arthritis.

A randomised, double-blinded, placebo-controlled clinical trial concluded that extract of turmeric was more effective than a ‘dummy’ placebo treatment at reducing knee pain.

A scientifically robust study, published in a respected medical journal, has found turmeric may be an effective painkiller for arthritis

Turmeric, which is widely used as a flavouring in South Asian cooking, has been used as a traditional Eastern medicine for centuries.

But it is only in recent years that modern science has begun to take the spice seriously as a drug.

Osteoarthritis – sometimes called ‘wear and tear’ – is a condition that occurs when the surfaces within joints become damaged.

Cartilage covering the ends of bones gradually thin over time, and the bone thickens, according to Versus Arthritis.

Around a third of people aged 45 years and over in the UK suffer from the condition. This equates to roughly 8.75 million people. At least 20 million are known to suffer in the US.

It is different to rheumatoid arthritis, a long-term illness in which the immune system causes the body to attack itself, causing painful, swollen and stiff joints.

Replacement joints are often necessary for osteoarthritis patients, because the joint has been worn down and causes agonising pain.

Turmeric, which is ground from the dried root of a plant called Curcuma longa, in recent years has been trialled as a treatment for lung disease, Alzheimer’s, heart disease and depression.

Growing evidence suggests it also has an impact on some cancers, thought to be because it stops cancer cells dividing and spreading.

Curcumin – the active ingredient in turmeric – is a polyphenol which has significant antioxidant, anti-inflammatory and antiseptic properties.

For the latest trial, experts at the University of Tasmania, Australia, randomly assigned 70 patients with symptomatic knee osteoarthritis and swelling inside the knee joint to receive either two capsules per day of turmeric or a placebo for 12 weeks.

The results, published in the Annals of Internal Medicine journal, found that patients taking the turmeric supplements reported less pain than those in the placebo group – and with no side effects.

Those taking turmeric also resorted to taking fewer other pain medications than those taking the dummy treatment.

Scans revealed no differences in the structural features of the knee joint – suggesting the impact was on the reception of pain, rather than the physical disease.

The researchers said given there are no effective treatments for osteoarthritis – and painkillers barely work – it is worth taking the results seriously.

They called for much larger trials to definitively assess the clinical significance of their findings.