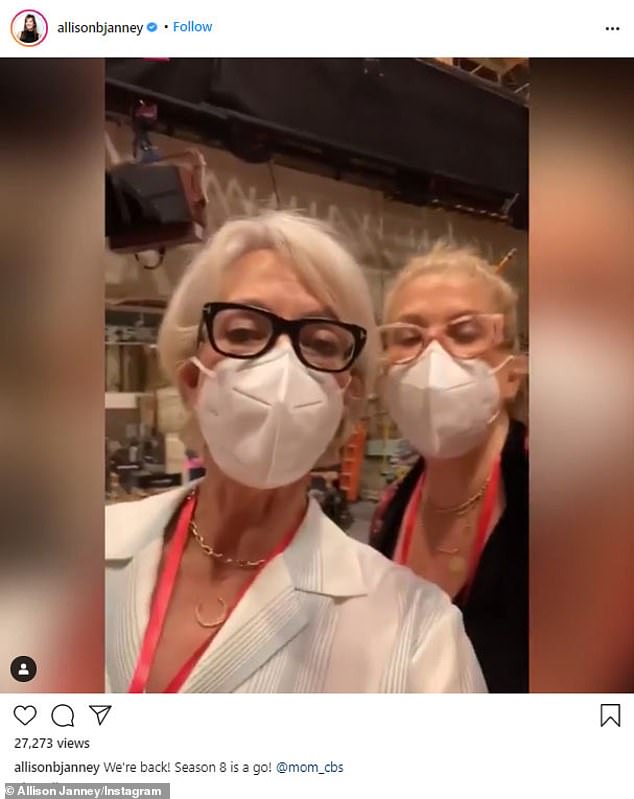 Her series was left reeling after the unexpected exit of one of its two leads, Anna Faris.

But Allison Janney showed she and the crew on Mom were soldiering on in an Instagram video posted Monday.

The 60-year-old Academy Award winner gave her hundreds of thousands of fans a glimpse of the set and showed everyone was vigilant about mask wearing.

On her own: Allison Janney, 60, gave her fans an update Monday on Instagram from the set of Mom as it resumed filming following the departure of her costar Anna Faris

Allison’s appearance was a departure from her character Bonnie Plunkett’s usual look.

Instead of her long brunette tresses, she sported a casual white bob, though it wasn’t clear if she’d wear a wig when shooting began or if she was trying out a new look for season eight.

The West Wing star had on a cream-colored striped shirt and wore thick black glasses.

She and all of her colleagues assembled around the camera to show off their heavy-duty masks, an essential part of their coronavirus safety measures. 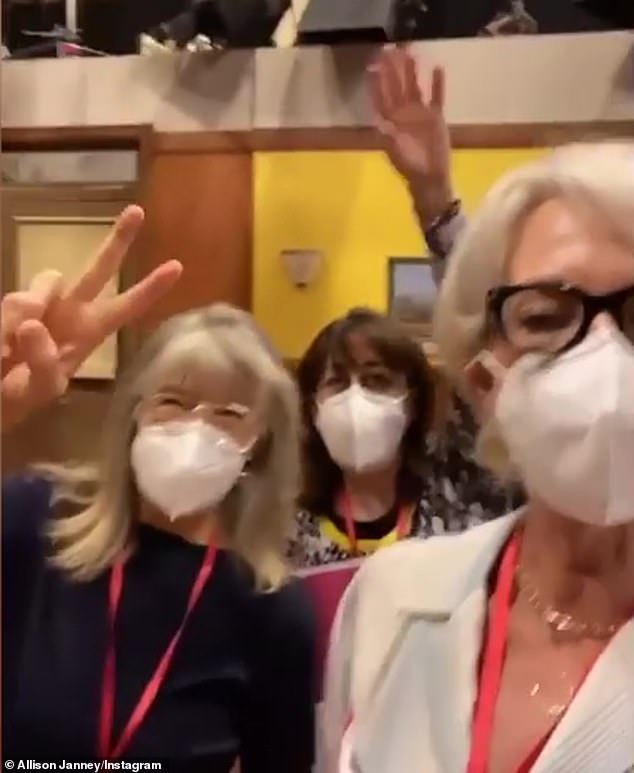 Muted look: Janney’s brunette locks were traded out for a white bob, and she wore a cream-colored striped top 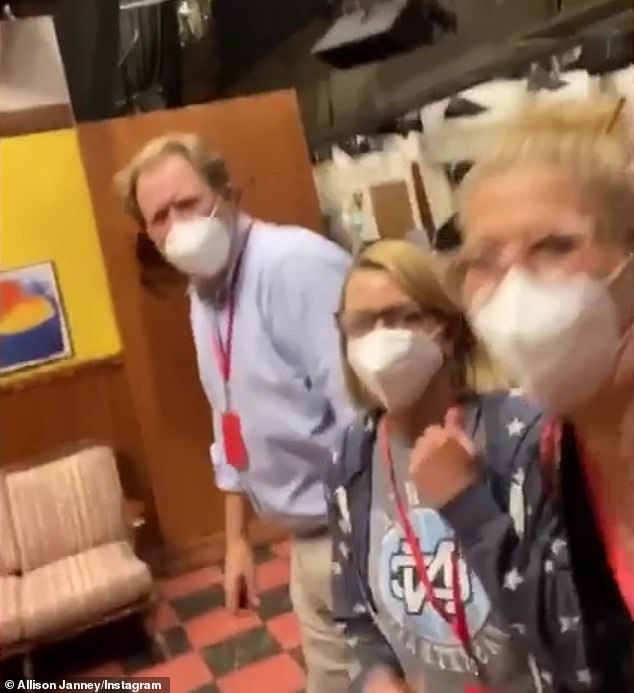 Safety first: The actress panned the camera around to show the crew members wearing masks, though one joked that it ‘sucks’

‘Hi everyone. We are all back at Mom on our first day with the new COVID protocol,’ Janney announced as she swung the camera around to show off her coworkers, who waved.

The upbeat clip was broken up by one crew member who pointed at her mask and said, ‘This sucks,’ though she seemed lighthearted about the matter.

‘It’s a whole new territory, but we’re excited for season eight to begin!’ Allison gushed as everyone around her started cheering and clapping.

Fans also got to see what the set looks like beyond what’s shown on television.

Missing from the celebration was Janney’s costar Anna Faris, who announced on September 4 that she wouldn’t be returning to the series after starring on it for seven seasons. 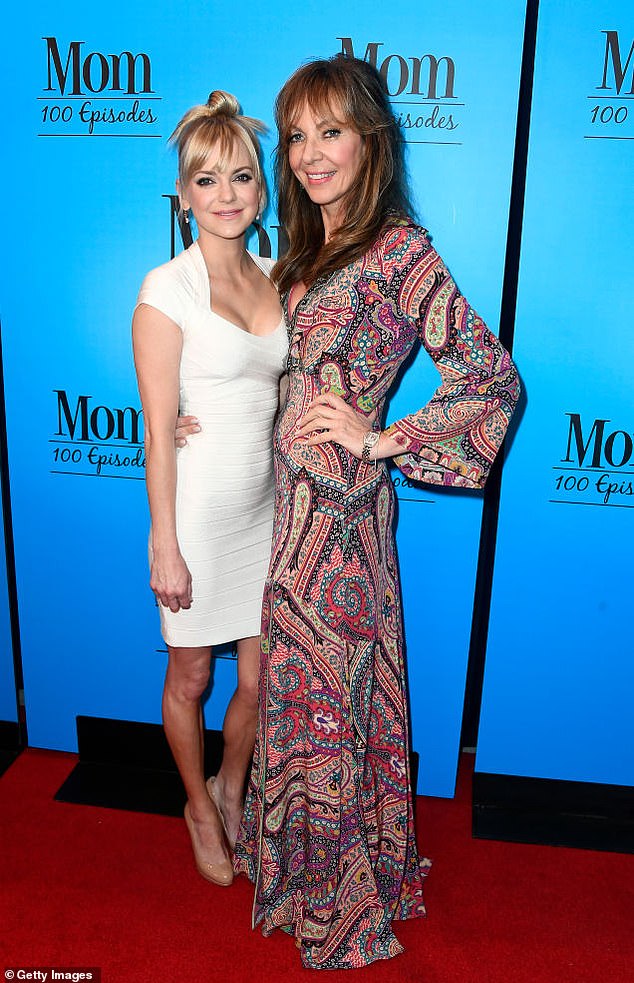 Surprise exit: On September 4, Janney’s costar Anna Faris said she’d be leaving the show after seven season. According to People, the announcement through the show into disarray; shown in 2018

‘The past seven years on Mom have been some of the most fulfilling and rewarding of my career. I’m so thankful to Chuck, the writers, and my amazing castmates for creating a truly wonderful work experience,’ the 43-year-old actress wrote.

‘While my journey as Christy has come to an end, allowing me to pursue new opportunities, I’ll be watching next season and rooting for my TV family.’

The departure wasn’t expected by the creative team or crew, People reported.

‘It was a surprise to hear that Anna was leaving,’ an insider said. ‘None of us are happy about that.

‘It was sudden and unwelcome, and it left the entire network scrambling,’ they continued. ‘This is not a good thing at all.’ 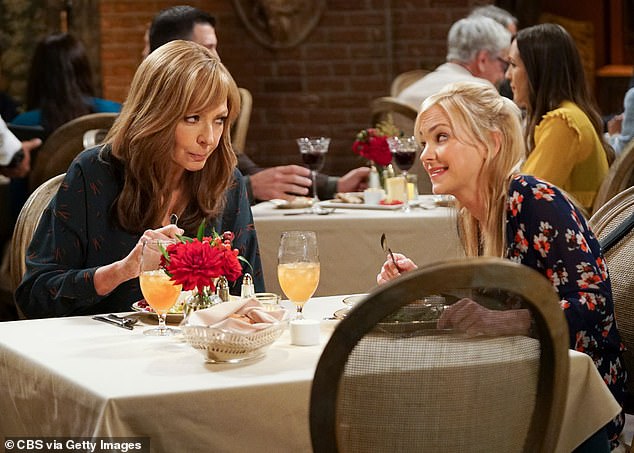 Shocking: ‘It was sudden and unwelcome, and it left the entire network scrambling,’ an insider said. ‘This is not a good thing at all’; still from Mom 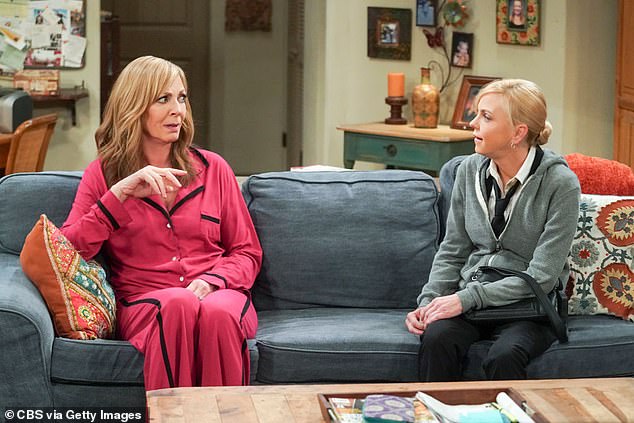 Unhappy: ‘Mom has been one of CBS’ more profitable scripted shows, in a very challenging economic time,’ they continued. ‘And now one of the leads is gone. It’s actually a nightmare. No one wanted this’; still from Mom

Although she announced that she wouldn’t be continuing ten days before production began, the House Bunny actress had settled her departure with the show early on during its pandemic hiatus.

Still, her exit was something ‘no one’ wanted, as the series was continuing to pull strong ratings years into its run.

‘Mom has been one of CBS’ more profitable scripted shows, in a very challenging economic time,’ the source explained. ‘And now one of the leads is gone. It’s actually a nightmare. No one wanted this.’

Since its 2012 premiere, Mom has managed to appeal to both critics and audiences, and Janney has been awarded for her comic performance with two Primetime Emmys. 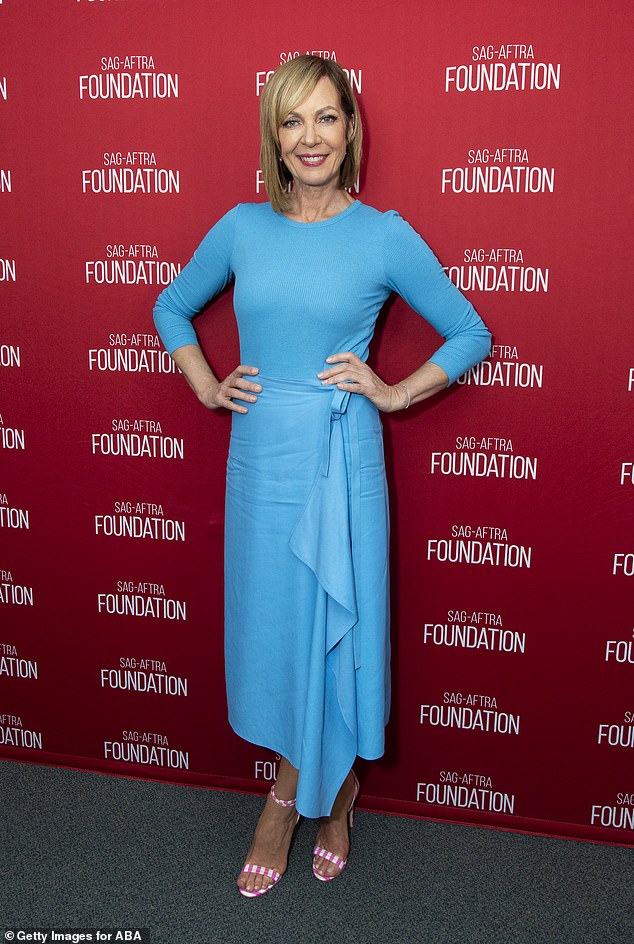 Still rising: Janney has consistently been an acclaimed character actress, and she was nominated for and own her first Oscar for 2017’s I, Tonya; pictured in February

Janney shouldn’t have any trouble continuing on her own, as the Hours star has been an in-demand character actress for years who consistently generated critical acclaim for years.

She was nominated for multiple awards during her run on The West Wing, and she’s been praised for her roles in American Beauty, Juno and Bombshell, among others.

Despite her standing in the industry, Janney had never been nominated for an Academy Award, but that changed when she won the Best Supporting Actress Oscar for 2017’s I, Tonya, which starred Margot Robbie as the infamous skater.