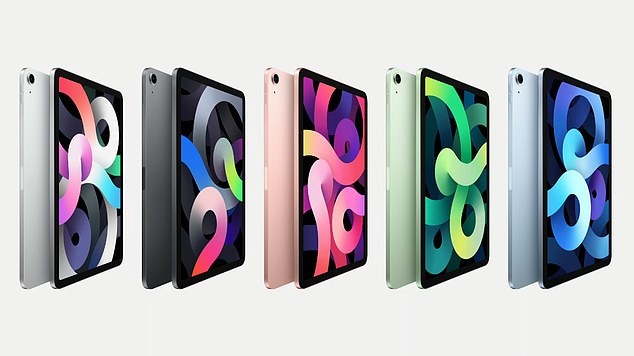 Apple has unveiled its iPad Air and alongside a new Apple Watch, the Series 6, and the iPad 8th Generation.

iPad Air has a tiny fingerprint sensor for TouchID built into the power button and is powered by a brand new chip, called A14.

It also has a 12MP rear camera, a 10.9″ liquid retina display and LTE mobile internet that is 60 per cent quicker than its predecessor.

The brand new iPad Air will be available next month and is set to retail for $599 in the US.

Apple also unveiled the iPad 8th Generation, which comes with the A12 bionic chip which is 40 per cent faster and two times faster than the top selling Windows tablet, Apple claims.

iPad 8th Generation will star at $299 for education users and is available to order today, with availability on Friday.

Apple previously updated its iPad Pro, and is now bringing higher specifications to the rest of its range of tablets.

Alongside the new hardware, Apple is also rolling out iOS 14 for the tablet which uses the device’s computing power and pencil capability to detect handwritten text.

As well as the tablet upgrades, Apple announced a range of new Apple Watches.

The firm’s annual showcase was thrown into disarray following the disruption caused by the Covid-19 pandemic.

Instead of its usual in-person extravaganza, the fanatics were invited to attend a virtual event streamed from Apple Park in Cupertino, California from 10am Pacific time (18:00 BST) today.

Shortly after launching, the stream had more than one million concurrent viewers.

This is the time of year Apple usually confirms new iPhones – it was September 12 last year – but the firm said new iPhones won’t be available until next month, fuelling speculation that it could hold a separate standalone event in October. 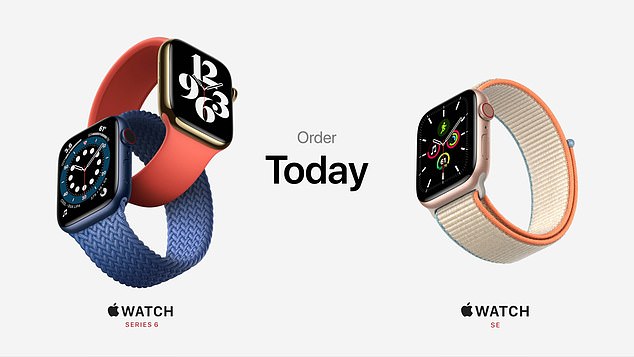 While there is no iPhone reveal, the new Apple Watch is decked out with a host of upgrades, including the ability to track blood oxygen levels

Apple is investing in the construction of two of the world’s largest onshore wind turbines, as part of its effort to become ‘100 per cent carbon neutral’ by 2030.

The 650-foot turbines, located near the Danish town of Esbjerg, are expected to produce 62 gigawatt hours each year — enough to power almost 20,000 homes.

The electricity produced at Esbjerg will be used to power Apple’s 500,000-square-foot data center in Viborg, with all surplus energy going into the Danish grid.

It will also act as a test site for powerful offshore wind turbines, the company said.

Apple did not say how much it was investing in the project, which is being developed in partnership with European Energy. 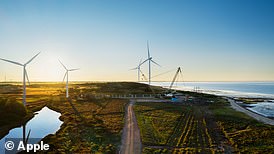 While there is no iPhone reveal, the Apple Watch is decked out with a host of upgrades, including the ability to track blood oxygen levels.

An in-built blood oxygen level sensor shines red and IR light onto the wrist and measures what is reflected back.

Algorithms detect how much oxygen is present in the blood in just 15 seconds and Apple hopes this facility will provide key information for a range of scientific studies.

S6 is up to 30 per cent faster than the previous generation due to a chip adapted from the A13 bionic chip from the iPhone 11.

S6 will also be available in blue aluminium, classic gold, grey/black and, for the first time, Product(RED).

Apple also made a big deal of its no ‘solo’ strap, a band of continuous silicone without a clasp or button.

Apple has also created dozens of new faces ranging from stripes to a tachymeter.

While it has added one marquee new feature and a host of new faces, bands and gimmicks, Apple is also taking a leaf out of the iPhone playbook and is creating an Apple Watch SE which uses the S5 chip and is a simplified version of the gadget.

Apple kept quiet before the event and there was no mention of an iPhone in the run up to ‘Time Flies’.

Rumours were abound that it would be delayed due to supply chain issues brought about by the global pandemic.

Production delays in China, travel restrictions worldwide and related issues linked to measures designed to slow the spread of coronavirus are behind the delay.

With details of the new iPhone models likely delayed until next month, Apple is expected to spend today’s event focusing on a range of other products.