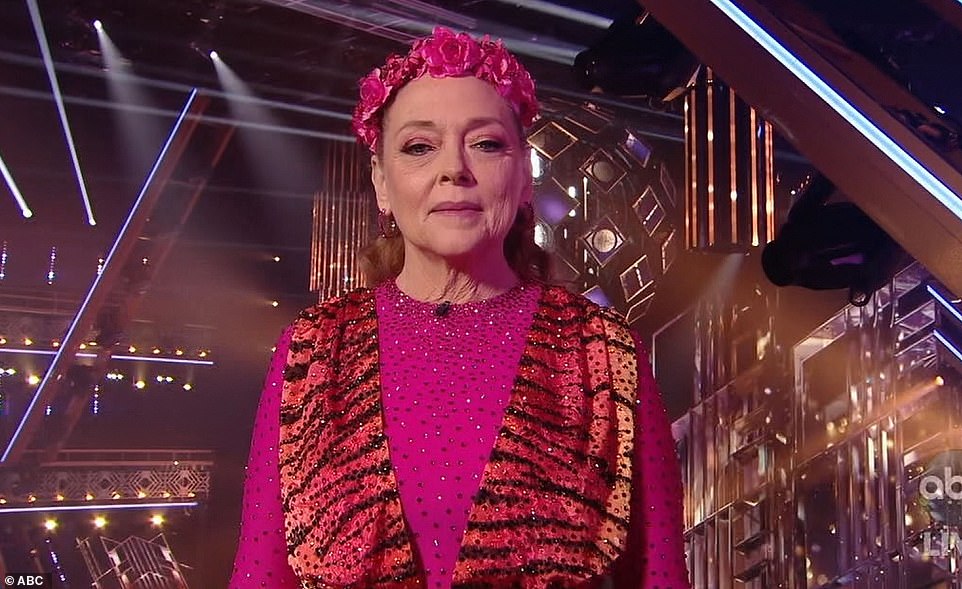 Carole Baskin performed Eye Of The Tiger on Monday during the season 29 premiere of Dancing With The Stars on ABC.

The 59-year-old big cat rights activist became a pop culture sensation following the release in March of the Netflix documentary Tiger King and was among the 15 celebrities competing amid the ongoing coronavirus pandemic.

She was partnered with pro dancer Pasha Pashkov and they performed a paso doble routine that opened with Pasha in a cage with stuffed tiger animals.

Season premiere: Carole Baskin performed Eye Of The Tiger on Monday during the season 29 premiere of Dancing With The Stars on ABC

Baskin in a long skirt with tiger stripes and wearing a purple wreath freed Pasha from the cage as they performed to the Survivor song Eye Of The Tiger that was the theme for the 1982 sports movie Rocky III.

They received a score of 11 points from the judges and ended up at the bottom of the leaderboard at the end of the premiere.

Tyra Banks, 46, made a stunning debut as new judge after replacing co-hosts Erin Andrews, 42, and Tom Bergeron, 65, who announced their departures in July.

The model looked runway ready as she strode into the ballroom in a long red dress with a high thigh slit, matching long gloves and dangling earrings to open the live, two-hour show.

Banks told the audience that she watched the dancing competition show growing up with her family. 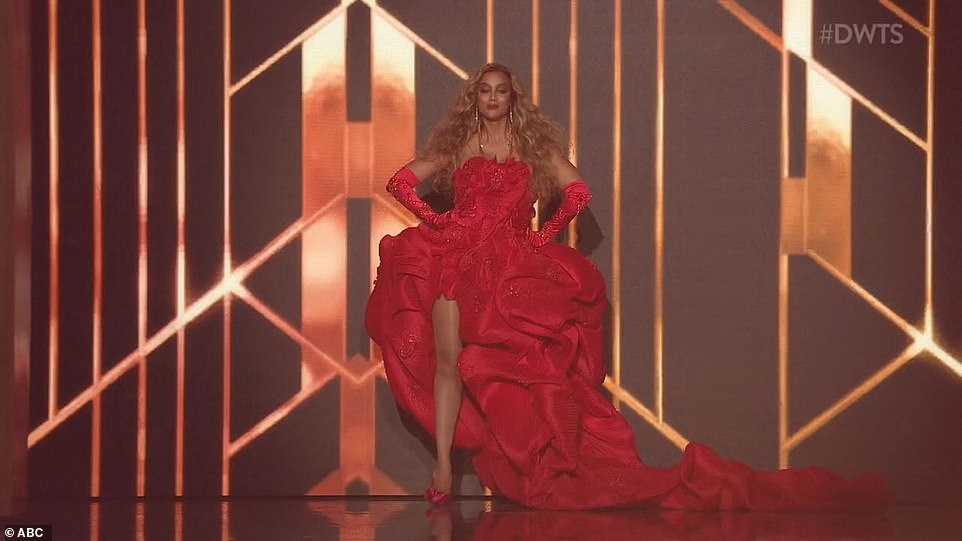 New host: Tyra Banks, 46, made a stunning debut as new judge after replacing co-hosts Erin Andrews, 42, and Tom Bergeron, 65, who announced their departures in July 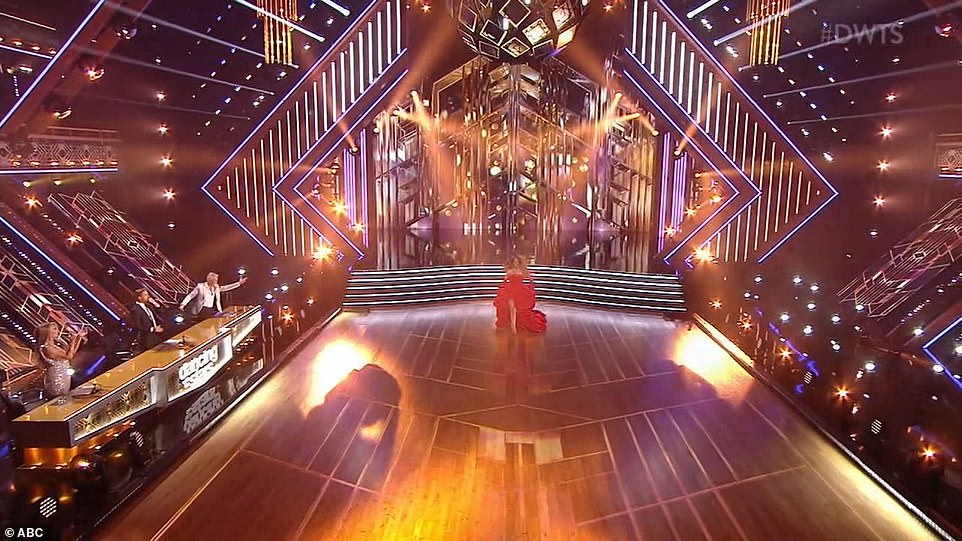 Redesigned ballroom: The ballroom was redesigned to provide social distancing for the judges amid the COVID-19 pandemic

‘Look, mama, I’m in the ballroom! And I get to say, ”Welcome to Dancing With The Stars”,’ Banks said.

Baskin upon introduction made paws with her hands and clawed the camera. 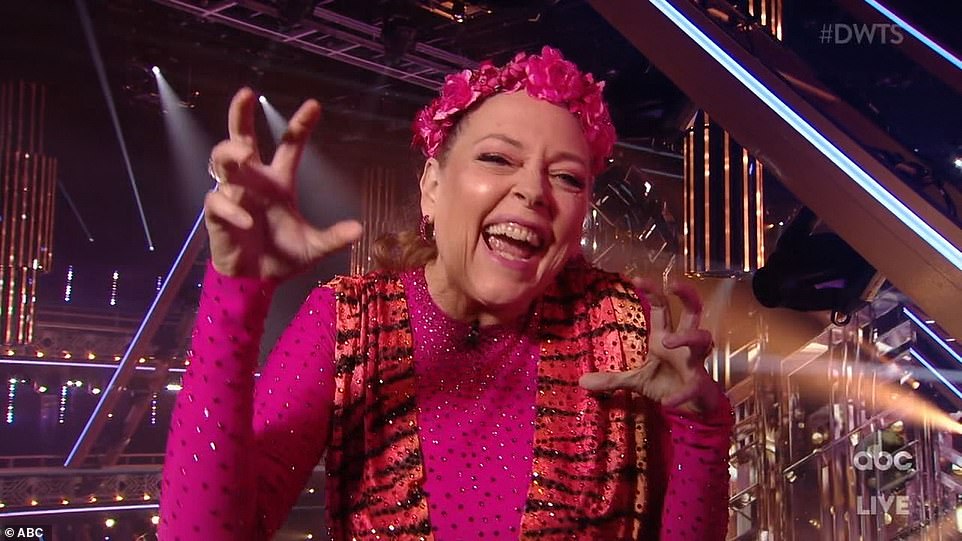 Animal activist: Baskin upon introduction made paws with her hands and clawed the camera

Banks, who also became an executive producer of DWTS, then explained how the ballroom received a pandemic makeover with social distancing between judges Carrie Ann Inaba, 52, Bruno Tonioli, 64, and newcomer Derek Hough, 35.

Former six-time champion Hough was replacing Len Goodman, 76, who could not travel from London due to COVID-19 pandemic travel restrictions.

McLean was teamed with pro dancer Cheryl Burke and they scored 18 for their first dance. 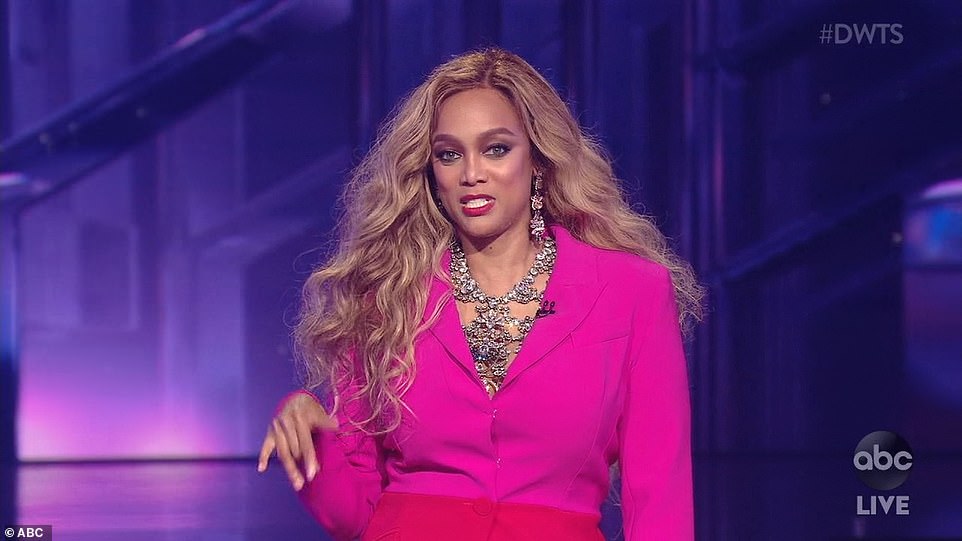 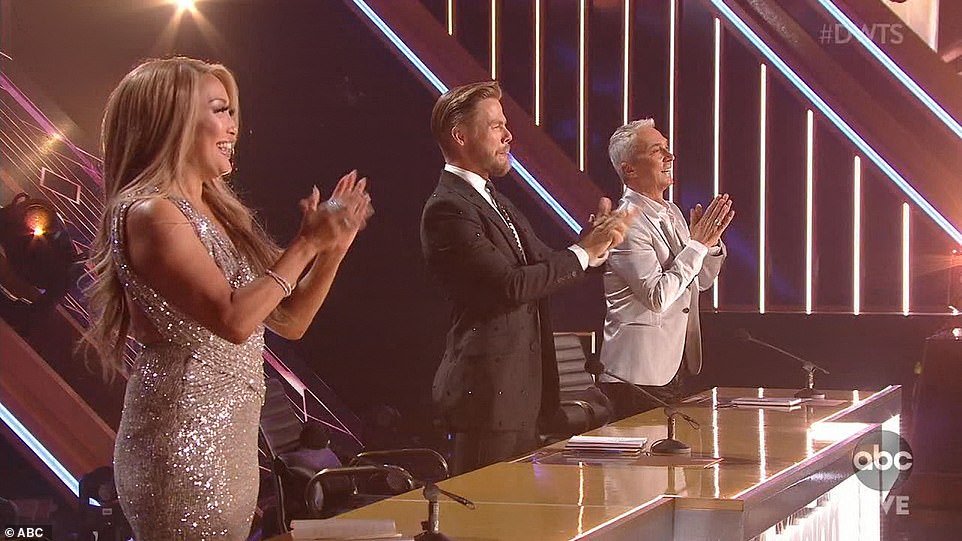 The judges: Inaba, Hough and Tonioli will evaluate the dancing couples during season 29 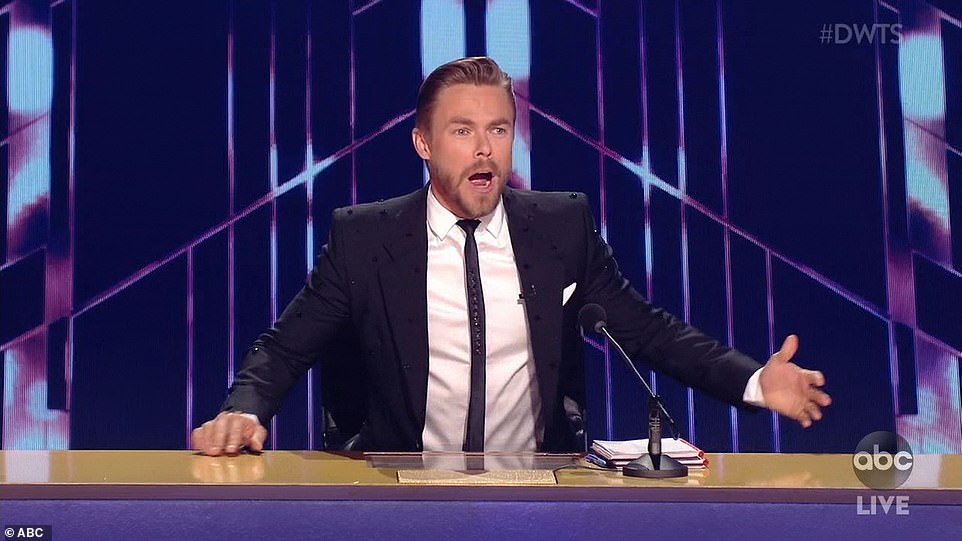 Past champion: Hough won DWTS a record six times before moving to the judging table 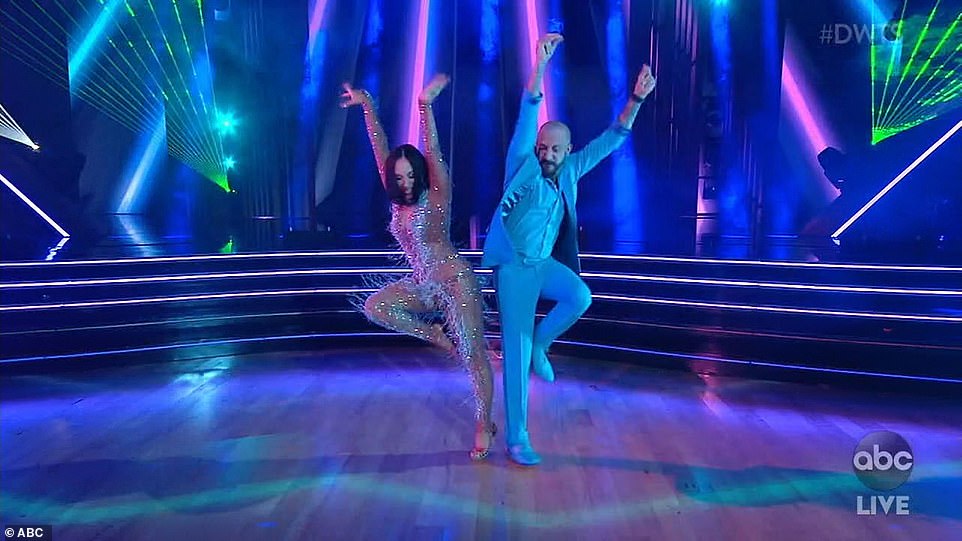 First dance: AJ McLean was teamed with pro dancer Cheryl Burke and they scored 18 for their first dance

Stause, 39, who stars in the Netflix reality show Selling Sunset, was up next with pro partner Gleb Savchenko and scored 13 points.

Davis, 36, and pro partner Peta Murgatroyd performed a foxtrot that earned positive reviews from the judges and 17 points.

Banks reminded Davis of the past success of NFL players on the dancing competition show and asked the Super Bowl champion if he felt any extra added pressure. 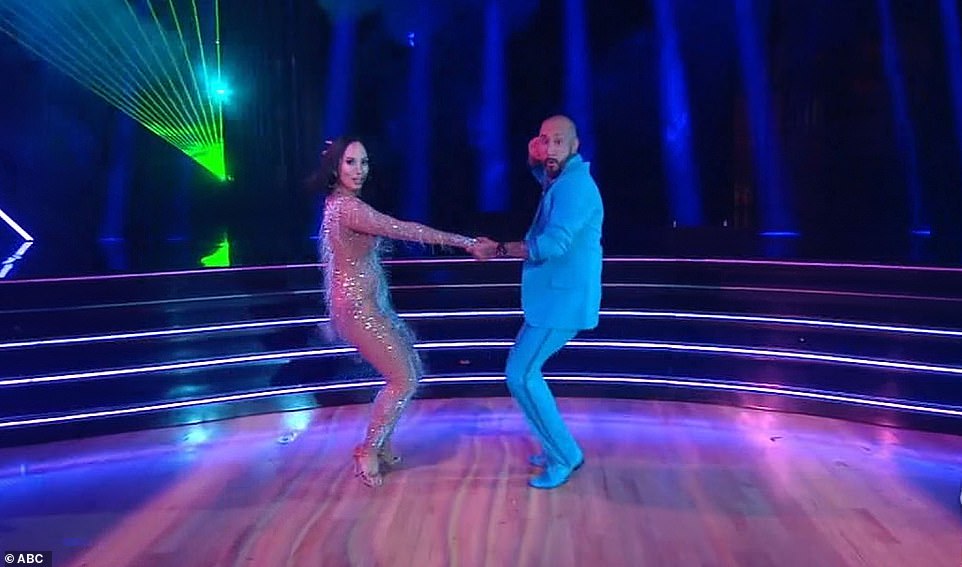 ‘I feel the pressure, but I’m going to try and relax and stay calm,’ Davis said.

Heche, 51, danced a cha-cha with pro partner Keo Motsepe to the hit song Don’t Start Now by Dua Lipa that ended with a big dramatic dip.

They earned scores of six from all three judges for 18 points.

Mae and pro partner Brandon Armstrong in neon green outfits performed a salsa that earned 18 points from the judges. 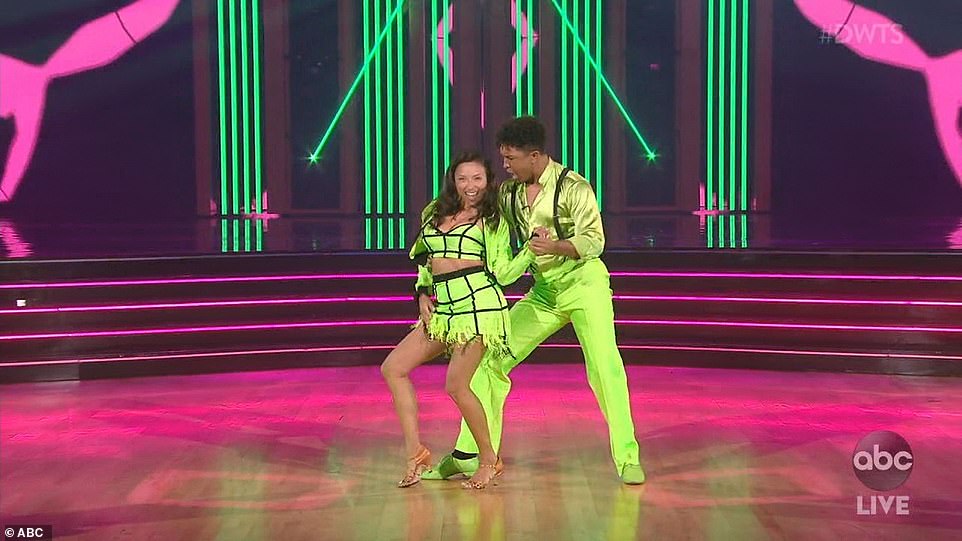 They earned a scored of 18 points from the judges. 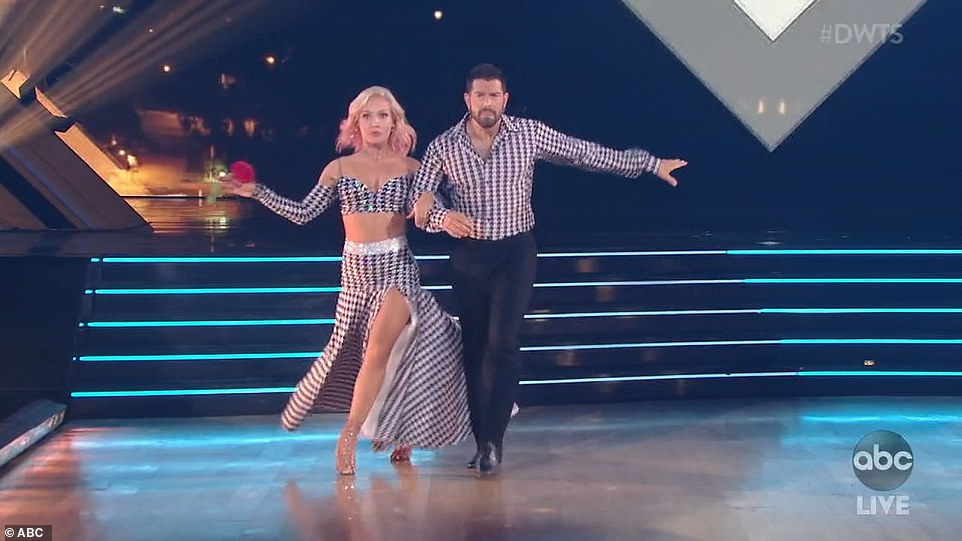 The Bachelorette star Bristowe, 35, performed a cha-cha with pro partner Artem Chigvintsev, 38, who returned to the show after not appearing on season 28.

Bristowe and Chigvintsev, who recently welcomed a son with fiancee Nikki Bella, received a score of 20 points from the judges.

Catfish host Schulman, 35, danced a foxtrot with Jenna Johnson that the judges raved about before awarding them a score of 20 points. 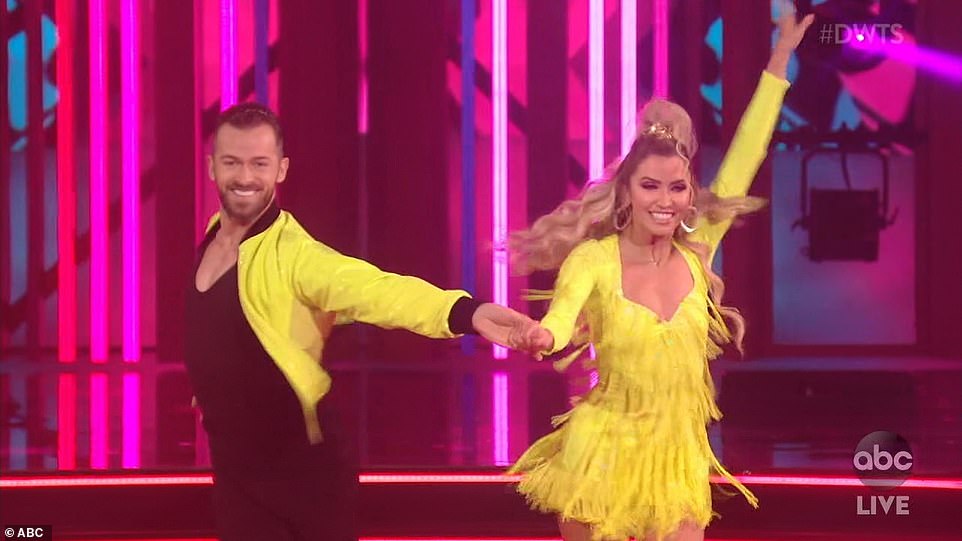 Bachelorette star: Kaitlyn Bristowe, 35, performed a cha-cha with pro partner Artem Chigvintsev, 38, who returned to the show after not appearing on season 28

Goodman made an appearance via video and said he would be keeping an eye on the dancers from the season before giving Banks a ’10’.

Weir, 36, was partnered with Britt Stewart who was making her debut as a pro dancer on the show.

They performed a cha-cha that earned cheers in the rafters from fellow contestants and a score of  18 from the judges. 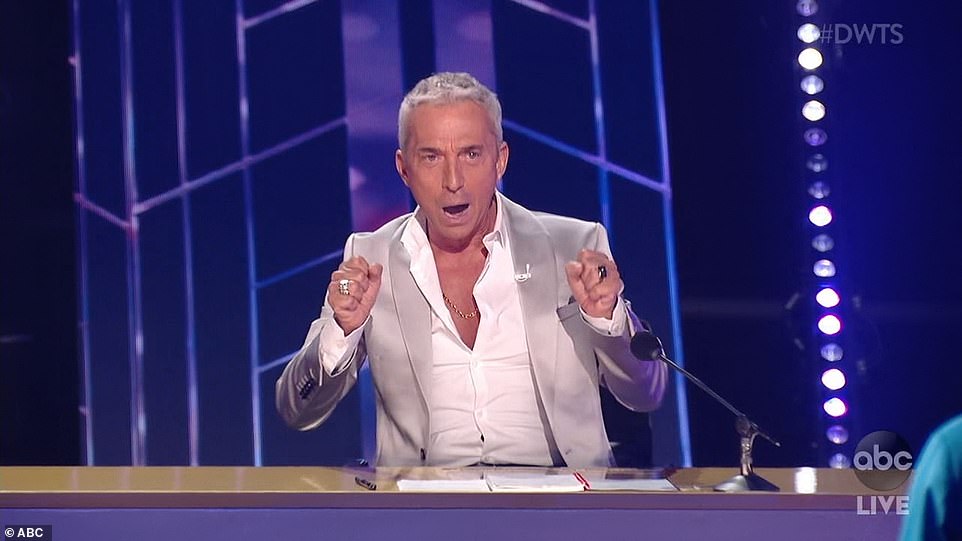 New look: Tonioli was having fun with his new blonde look

One Day At A Time star Machado, 48, was paired with pro dancer Sasha Farber. They hyped up the ballroom with their energy while performing and earned 21 points from the judges.

Former NBA star Oakley, 56, was teamed with pro partner Emma Slater and they danced a salsa that earned a score of 12 from the judges.

Aldama, who was featured in the Netflix docuseries Cheer, was partnered with pro dancer Valentin Chmerkovskiy and admitted to him that she was ‘terrified’. 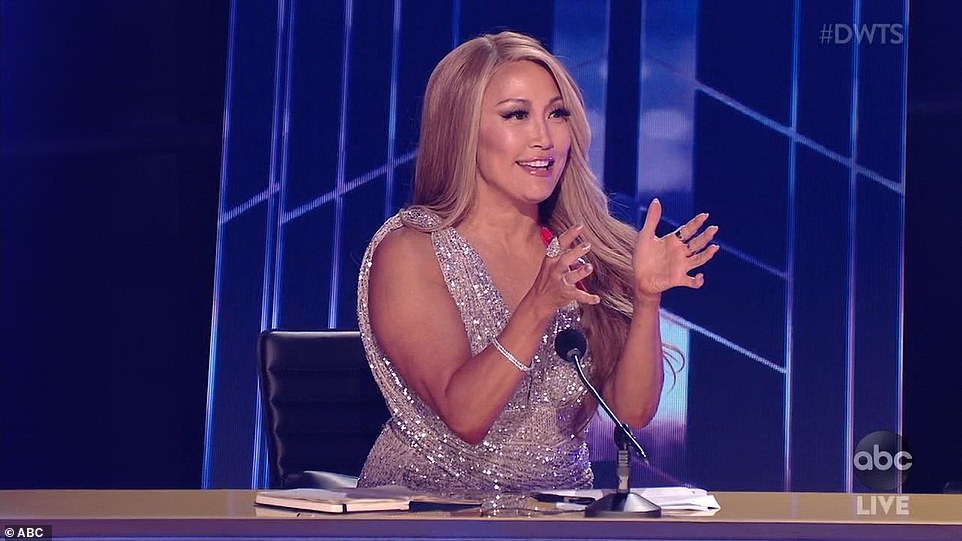 Good tips: Inaba offered helpful tips to the dancers during the season 29 premiere

They danced a foxtrot to My Wish by Rascal Flatts and earned a scored of 19 points.

Nelly, 45, and pro dancer Daniella Karagach performed a salsa to his song Ride With Me that ended with the rapper and singer doing a backflip.

Tonioli said their interplay was ‘fun’, while Inaba admitted that she was surprised by Nelly’s backflip before the judges awarded them with 16 points. 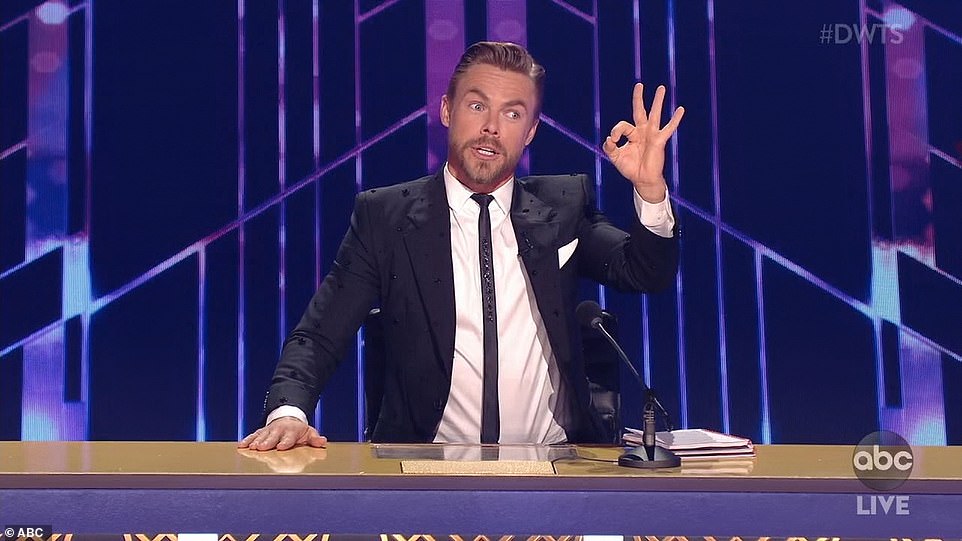 Good job: Hough praised the performances while pointing out areas for improvement

Baskin then performed and afterward Inaba admitted that she herself was a ‘crazy cat’ lady and praised Baskin for not holding back.

Hough told Baskin that she ‘smashed’ her paso doble dance, while Tonioli teased her about her claw moves.

Maldonado-Passage is serving a 22-year federal prison term for killing five tigers and plotting to have Baskin killed. In June, a federal judge awarded Baskin ownership of the private Oklahoma zoo run by Maldonado-Passage.

Dancing With The Stars will return Tuesday, September 22, on ABC with the first elimination of the season. 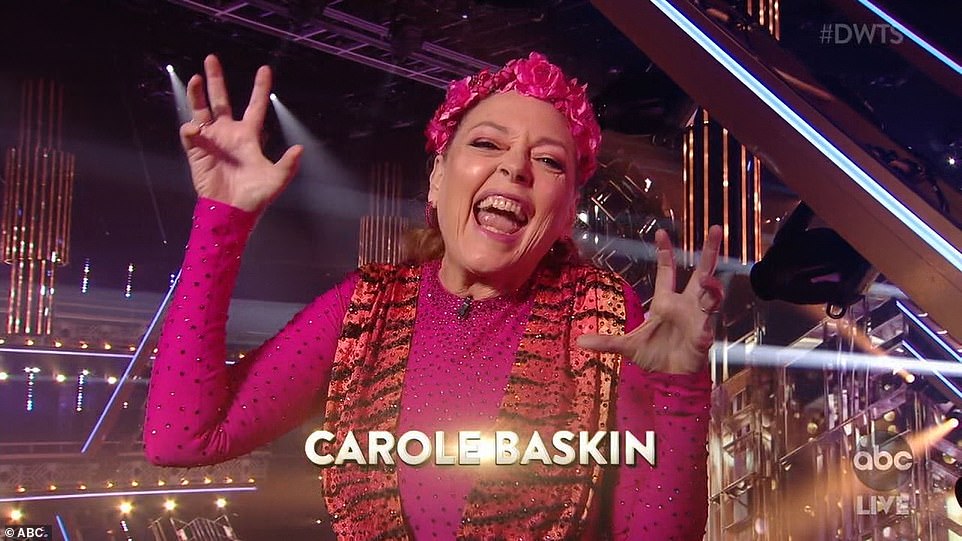 Dancing With The Stars Injuries

In 2006, season two contestant Romeo Miller withdrew from Dancing With The Stars due to an injury and was replaced by his father Master P.

Pro dancer Derek Hough during season six in 2008 pulled his neck during rehearsal and missed a week of dancing.

Derek during season seven also blacked out during rehearsal after tripping and landing on the back of his head.

Season seven also saw the departure of Misty May-Treanor after she was injured during practice and ruptured her Achilles tendon. 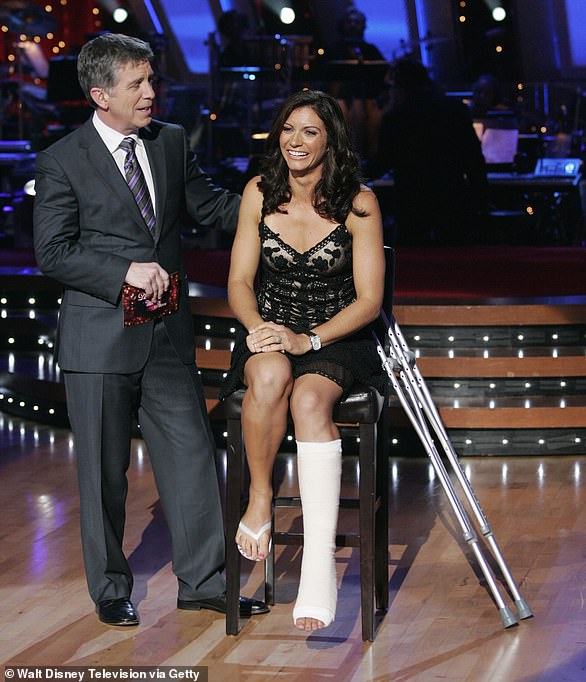 Rehearsal injury: Misty May-Treanor is shown with host Tom Bergeron in October 2008 as she revealed rupturing her Achilles tendon during practice on Dancing With The Stars

Susan Lucci during season seven fractured two bones in her foot, but remained in the competition.

Nancy O’Dell withdrew from season eight due to a torn meniscus, along with Jewel who fractured both her tibias just before the season premiere.

Steve-O also suffered a pulled back muscle during dress rehearsal in season eight and was unable to perform the salsa live.

Former House Majority Leader Tom DeLay during season nine withdrew from the competition in week three after injuring his foot during rehearsals before the premiere.

Billy Dee Williams was forced to withdraw from season 18 due to a chronic back problem. 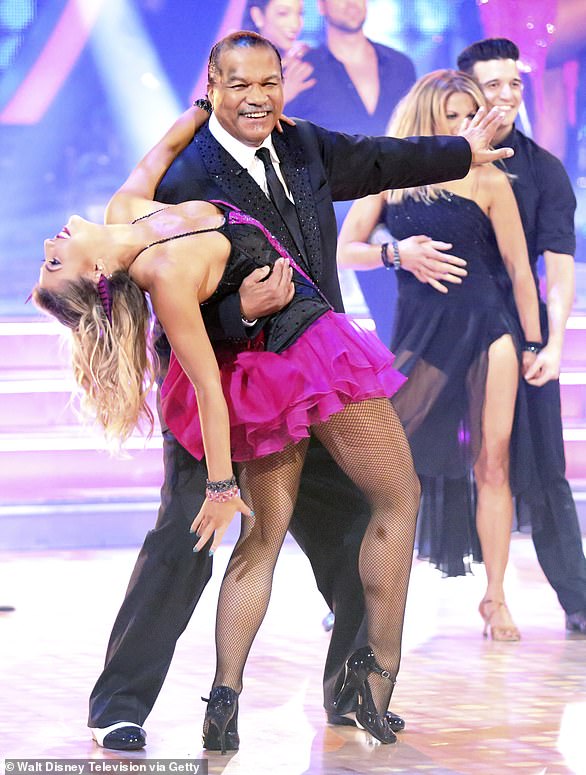 Early exit; Billy Dee Williams withdrew early from season 18 due to a chronic back problem

Pro dancer Mark Ballas during season 22 injured his back during rehearsal and was unable to perform for a week with his partner, UFC fighter Paige VanZant.

Pro dancer Sharna Burgess during season 23 injured her knee during rehearsal with James Hinchcliffe and was out for two weeks.

Pro dancer Maksim Chmerkovskiy during season 24 suffered a calf muscle injury during rehearsal with Heather Morris and was replaced by dance troupe member Alan Bersten during a four-week recovery period.

Christie Brinkley broke her arm during practice five days before the season 28 premiere and was replaced by her daughter Sailor Brinkley-Cook.

Ray Lewis was forced to withdraw from season 28 after suffering three torn tendons in his foot during practice ahead of week three Movie Night. He re-aggravated an injury from 2010 while playing football for the Baltimore Ravens.

Country singer Lauren Alaina during Halloween Week of season 28 revealed that she’d been dancing with ‘four hurt ribs,’ having broken one during the first week of the show, and noting the others ‘don’t feel great’. 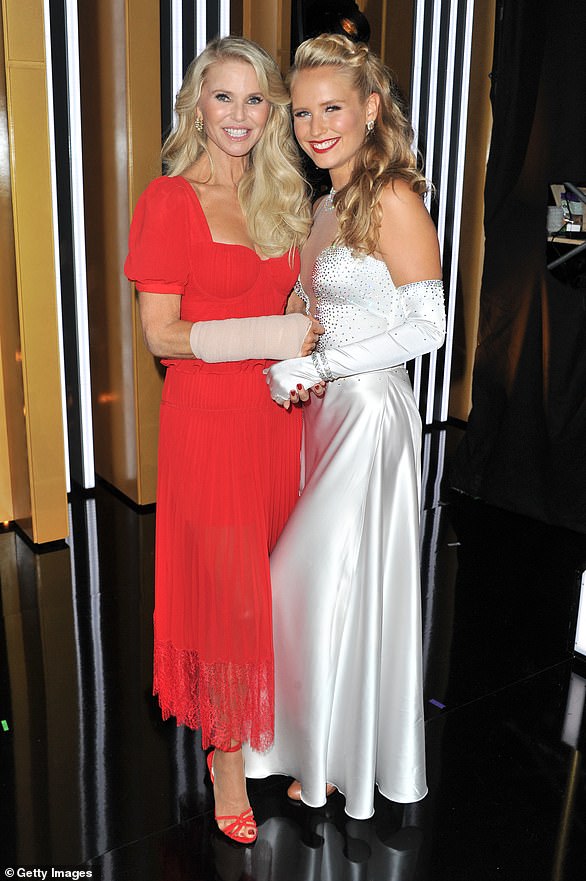 Stepping in: Christie Brinkley broke her arm during practice five days before the season 28 premiere of DWTS and was replaced by her daughter Sailor Brinkley-Cook