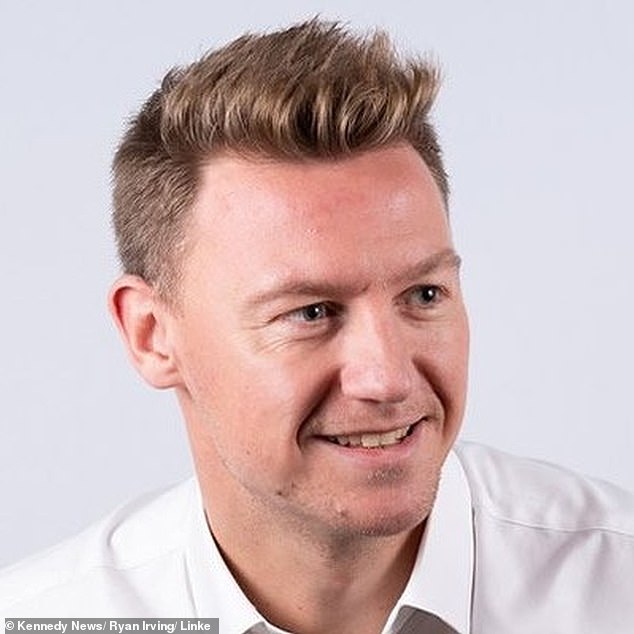 A business owner has publicly shamed hundreds of pandemic recession jobseekers – after 97 percent of applicants failed to follow his advert’s basic instructions.

Ryan Irving claims the job ad specified not to submit a CV but rather asked candidates to answer a handful of simple questions for a role at his web services company Ri Web.

In a LinkedIn rant, the businessman revealed that of a whopping 183 people who applied, all but six were automatically declined because they weren’t sufficiently tuned in to respond properly to the request.

The 36-year-old slammed the majority of applicants and said that at a time when ‘unemployment is high and opportunities are few’ their lack of attention was ‘just not good enough’.

While some supported his message to pay attention to detail and not just fire out CVs blindly, others branded him ‘sanctimonious’ and said he was failing to see it from the point of view of jobseekers.

Business owner Ryan Irving, 36, from Henley-on-Thames, shared his frustration on LinkedIn after only six jobseekers out of 183 correctly answered his job advert

While he did not specify which job advert his post referred to, his company, Ri Web, recently had advertised a one-year internship, paying £12,000.

‘We recently ran a job ad which attracted 183 applications which, unfortunately, is symptomatic of the current job climate.

‘Within our ad, we asked applicants to respond to a few simple questions instead of sending a CV and do you know how many responded as we’d requested? Six.

‘At a time where unemployment is high and opportunities are few, this is just not good enough. 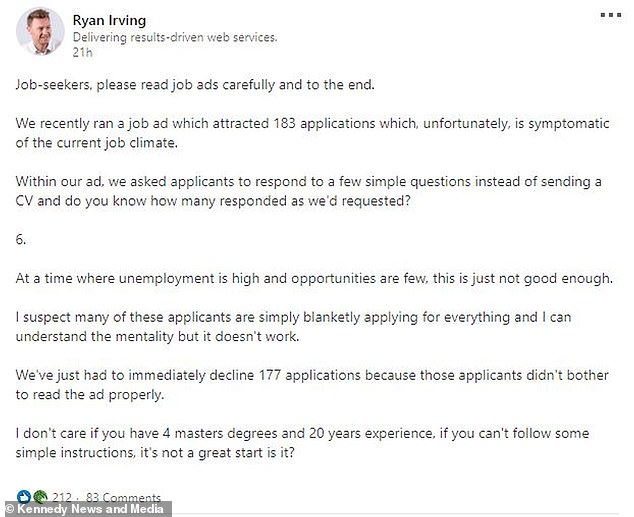 In the rant, Ryan said people should be able to follow ‘simply instructions’ and that the fact 177 people had failed to correctly answer his job advert was ‘not good enough’

‘I suspect many of these applicants are simply blanketly applying for everything and I can understand the mentality, but it doesn’t work.

‘We’ve just had to immediately decline 177 applications because those applicants didn’t bother to read the ad properly.

‘I don’t care if you have four masters degrees and 20 years experience, if you can’t follow some simple instructions, it’s not a great start is it.’

Most people who responded to the post were sympathetic to his message.

Alyssa James said: ‘Why wouldn’t you read the ad? That seems crazy to me. If you have any real interest in a role you want to know every detail about what’s involved. Skim reading doesn’t scream enthusiastic, what a shame.’ 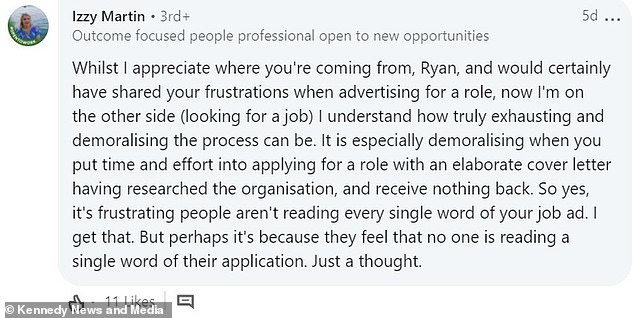 Many of the people who replied to Ryan’s rant were sympathetic, however, some reminded him of how demoralising jobseeking could be

Dorothy Dalton said the problem had got worse since Covid struck.

She said: ‘I’m finding that not reading things properly or following instructions has increased significantly post COVID. This is purely anecdotal, although I have heard there is a term now Covid Brain.

‘I find myself having to send things back or review them much more frequently.”

Alan said: ‘Perhaps instead of a patronising slightly sanctimonious post you could have tried a different way of feedback.

‘Sorry it does come across a bit that way, sure your intentions were good.’

But the business owner hit back, saying he had actually contacted those who were automatically rejected.

Ryan said: ‘That’s disappointing to read that you feel my post came across that way.

‘My intentions couldn’t have been further as my only hope was that job-seekers may benefit from my experience by reading job ads in full before applying.

‘We absolutely have responded to all applicants with details of why they were rejected, again, hoping to educate.’

But Izzy Martin said the recruiter should have had more sympathy with how demoralising the job hunt can be.

While Ryan did not specify which job advert his rant was relating too.

However, his company recently advertised a digital marketing internship role paying £12,000 a year for a one-year-long contract.

The advert was asking people to answer six specific questions, which you can see below:

– Where are your skills most lacking in relation to this role?

– What would you feel proud to accomplish over the 12 months?

Izzy said: ‘Whilst I appreciate where you’re coming from, Ryan, and would certainly have shared your frustrations when advertising for a role, now I’m on the other side looking for a job, I understand how truly exhausting and demoralising the process can be.

‘It can be especially demoralising when you put time and effort into applying for a role with an elaborate cover letter having researched the organisation, and receive nothing back.

‘So yes, it’s frustrating people aren’t reading every single word of your job ad. I get that.

‘But perhaps it’s because they feel that no one is reading a single word of their application. Just a thought.’

Alan Melia slammed Ryan’s rant for attacking those who were already in a desperate position.

Alan said: ‘Seems a lot of people here like a gotch. Nice to have a pop at people who may be desperate and trying to cover a lot of ground.

‘Enjoy the schadenfreude of others failure.

Of course, one can level many charges back at agencies/employers and how they obviously don’t review CVs, but I’m not that kind of bloke.’

‘With unemployment increasing, to add an extra hurdle to the process will only exacerbate stress levels.’