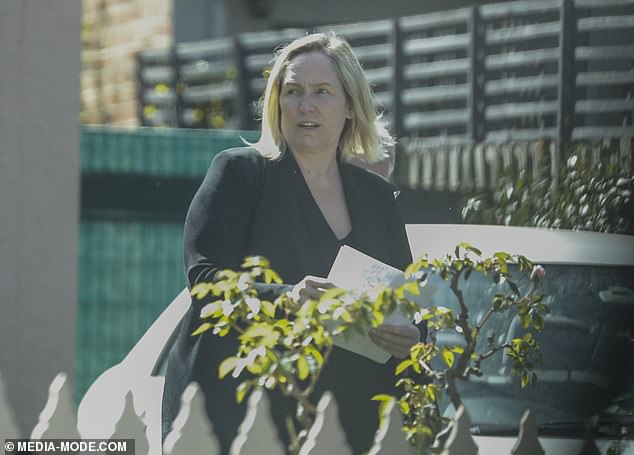 Radio presenter Fifi Box has taken another day off work as she mourns the death of Jaimi Kenny – the eldest daughter of her ex-partner Grant Kenny.

Fifi, who shared a close bond with Jaimi despite splitting from her father eight years ago, was absent from Fox FM’s Fifi, Fev and Byron show on Wednesday morning.

Her absence for the second day in a row was briefly mentioned at 6am.

Grief: Radio presenter Fifi Box has taken another day off work as she mourns the death of Jaimi Kenny – the eldest daughter of her ex-partner Grant Kenny. Pictured outside her father’s home in Melbourne on Tuesday morning

The 43-year-old also wasn’t on the air on Tuesday, with her co-host Byron Cooke telling listeners at the start of the broadcast: ‘Well, Fi is away today but the show must go on.’

Trying to lift the team’s spirits, Brendan Fevola added: ‘We’re a team, we’re one and one, we’re going to mould into one and just nail it. 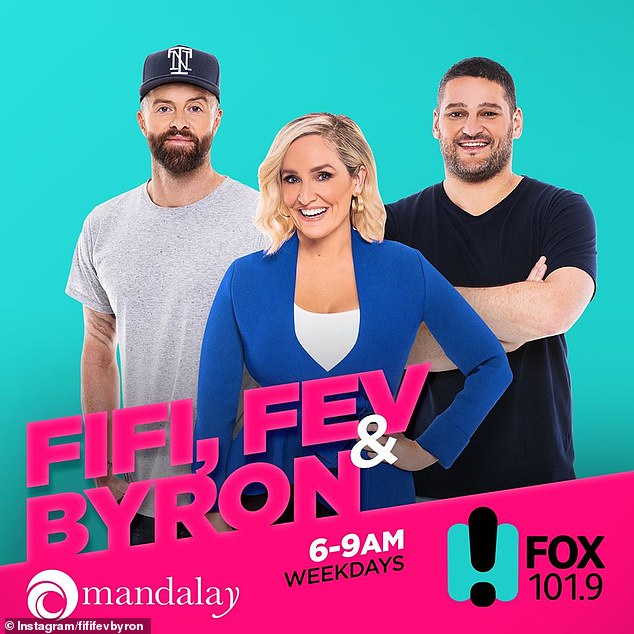 Personal leave: Fifi was absent from Fox FM’s Fifi, Fev and Byron show on Wednesday morning. Her absence for the second day in a row was briefly mentioned at 6am. Pictured with co-hosts Byron Cooke (left) and Brendan Fevola (right)

Later that morning, a visibly strained Fifi was pictured leaving her father’s home in Melbourne, just hours after learning of Jaimi’s death at the age of 33.

Jaimi wasn’t just her ex-partner’s daughter, she was also the older half-sister of Fifi’s child Trixie Belle, whom she welcomed in 2013 after a brief relationship with Grant.

Despite splitting with Grant months before giving birth to Trixie, Fifi remained close to his children from his first marriage: Jaimi, Morgan and Jett.

Jaimi would even babysit her much younger half-sister on occasion while single mum Fifi was at work.

Jaimi’s mother, three-time Olympian Lisa Curry, separated from Grant in 2009 after 23 years of marriage, before finalising their divorce in 2017.

Fifi and Grant dated for several months in 2012, but had broken up by the time she welcomed daughter Beatrix ‘Trixie’ Belle via IVF the following year.

She did not acknowledge Grant was Trixie’s father until 2016, when she shared a photo to Instagram of the retired athlete attending their child’s third birthday party.

In June 2019, Fifi welcomed another daughter, Daisy Belle, via IVF and an anonymous donor. The identity of Daisy’s father is not public knowledge.

The Curry-Kenny family confirmed Jaimi’s death in a statement on Monday afternoon.

‘It is with a very heavy heart that Lisa and I confirm our beautiful daughter Jaimi has lost her battle with a long-term illness and passed away peacefully in hospital this morning in the company of loving family,’ read the statement by Jaimi’s father, Grant.

Her family had supported her through years of treatment at the End ED private clinic on the Sunshine Coast.