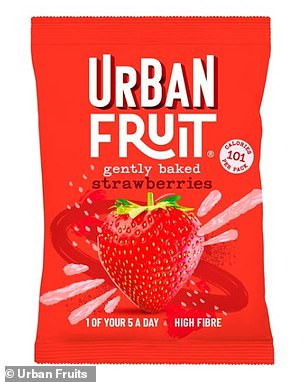 Urban Fruits Gently Baked Strawberries contain 20g of sugar in a small 35g bag It’s the same as five teaspoons – twice as many as an iced, sprinkled doughnut

‘Healthy’ fruit snacks for children can contain up to five teaspoons of sugar – the equivalent of two iced and sprinkled doughnuts.

Analysis by Action on Sugar has revealed that small products, designed to appear to be innocent on the surface, are actually crammed full of the sweet stuff.

Campaigners fear the products may be misleading parents into thinking they are buying their child guilt-free treats. Sugar can lead to weight gain and rot teeth.

Action on Sugar analysed the contents of dozens of the UK’s best-selling fruit snacks.

They found the worst offender was Urban Fruits’ Gently Baked Strawberries, which contained 20g of sugar in a small 35g packet — the equivalent of five teaspoons.

Asda’s Yogurt Coated Cranberries had 4.8 teaspoons of sugar – but a full packet is three times the size at 150g.

Tesco’s fruit bars – apple and sultana, strawberry and banana, and mango and banana – are all at the top of the table for sugar content. Each contains at least 4.5 teaspoons. However, the website says the bars are no longer available.

Action on Sugar is calling for a ban on the use of misleading claims such as ‘one of your five a day’, ‘naturally occurring sugars’ or ‘made from real fruit’ slapped on the front of such snacks.

Processed dried fruit products are marketed as ‘healthy snacks’ because they contain fruit – which is full of nutrients and vitamins and a better choice over a chocolate bar, for example.

However, the sugars in these products are categorised by Public Health England as ‘free sugars’ – the bad kind. That’s because they are highly concentrated or pureed. 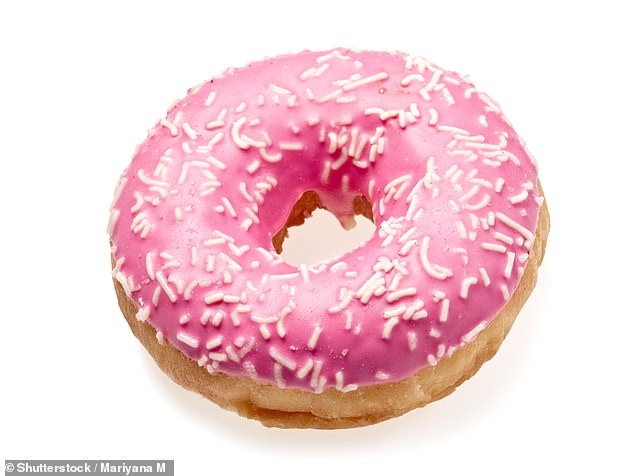 Action on Sugar found 65 per cent of products had the equivalent of two teaspoons of sugars or more in just one single portion – the same as eating an iced doughnut bought from the bakery in Sainsbury’s, Tesco, or Asda (pictured). But some had more

WHICH SNACKS WERE HIGHEST IN SUGAR?

The sugars found in whole fruit, such as a banana or apple, don’t have a negative effect on our health. Fruit is nutritious and full of fibre, which slows down the rate at which sugar is absorbed into the blood.

Fibre also expands the gut and makes you feel fuller, which makes you less inclined to eat more calories.

But when fruit is turned into fruit juice, the sugars come out of their cells and become ‘free sugars’. Despite the name, they are not ‘free’ to consume in excess.

This type of sugar is what most adults and children in the UK eat too much of, and is found in cakes, biscuits and other confectionery products. They are also in honey and smoothies.

Free sugars are digested extremely quickly and spike blood glucose levels in the body. Regularly having elevated blood sugar can lead to diabetes and heart problems.

When fruit is turned into juice the fibre is also lost so it is not as filling as a proper piece of fruit. It can lead to reaching for more calories.

Sugar in the fruit juice that makes up sweet ‘healthy snacks’ is therefore not regarded as any better than the sugar found in traditional sweets, although it may look better due to the way it is marketed.

It found 65 per cent of products had the equivalent of two teaspoons of sugars or more in just one single portion – the same as eating an iced doughnut bought from the bakery in Sainsbury’s, Tesco, or Asda.

Some had more sugar than this, however. One Tesco Pink Ring Doughnut contains 8.5g sugar per doughnut, the campaign group claims.

Despite Urban Fruit’s Gently Baked strawberries having 20g of sugar per 90g serving, it is marketed to appear as being healthy.

It boasts ‘101 calories per packet’, ‘one of your five a day’ and ‘high fibre’ on the front, detracting from the high sugar content.

When looking at sugars per 100g, rather than per serving, the analysis revealed a whopping 57 per cent of products have more free sugars than Haribo Starmix (47g per 100g).

Kiddylicious Apple Fruit Wriggles were the worst – made of a staggering 70 per cent sugar (70g per 100g).

However, because each small bag is only 12g, it is unlikely someone would eat 100g worth (eight packets). Still, a singular 12g packet contains 8.3 of sugar. 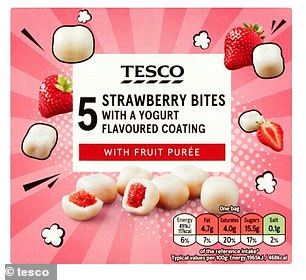 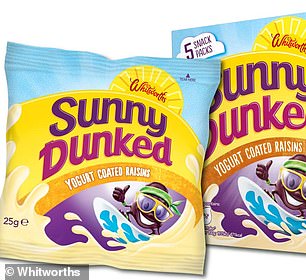 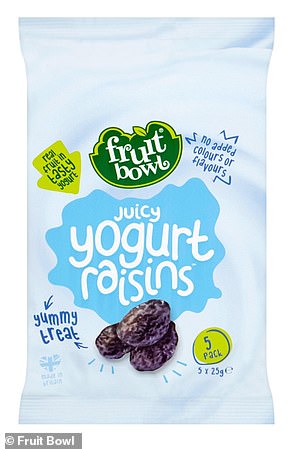 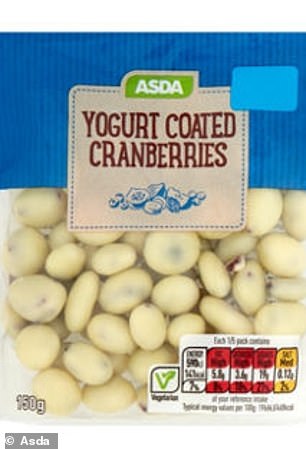 Asda Yogurt Coated Cranberries has 4.8 teaspoons of the sweet stuff 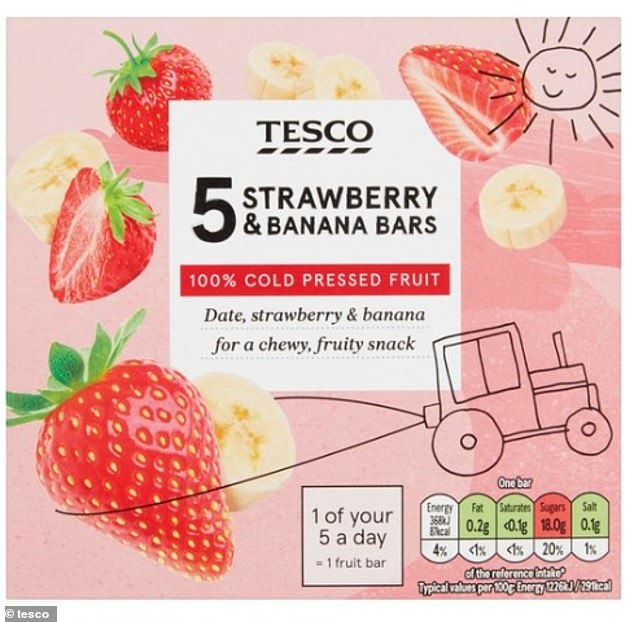 Tesco’s fruit bars – apple and sultana, strawberry and banana, and mango and banana – contain at least 4.5 teaspoons of sugar per bar. However, the website says the bars are no longer available 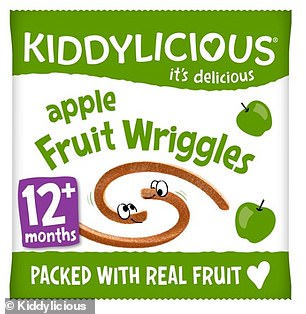 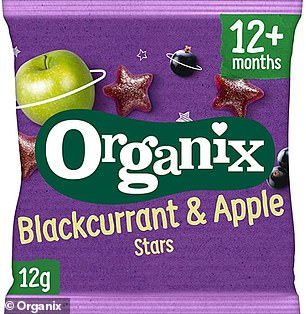 When looking at sugars per 100g, rather than per serving, the analysis revealed a whopping 57 per cent of products have more free sugars than Haribo Starmix (47g per 100g)

HOW MUCH SUGAR IS TOO MUCH?

The amount of sugar a person should eat in a day depends on how old they are.

Children aged four to six years old should be limited to a maximum of 19g per day.

Seven to 10-year-olds should have no more than 24g, and children aged 11 and over should have 30g or less.

Meanwhile the NHS recommends adults have no more than 30g of free sugars a day.

Popular snacks contain a surprising amount of sugar and even a single can of Coca Cola (35g of sugar) or one Mars bar (33g) contains more than the maximum amount of sugar a child should have over a whole day.

A bowl of Frosties contains 24g of sugar, meaning a 10-year-old who has Frosties for breakfast has probably reached their limit for the day before they even leave the house.

Children who eat too much sugar risk damaging their teeth, putting on fat and becoming overweight, and getting type 2 diabetes which increases the risk of heart disease and cancer.

Similarly, Organix Blackcurrant & Apple Stars – the name ‘Organix’ connoted with organic and therefore healthy – has 65g of sugar per 100g.

But it is served in 12g packets, containing 7.7g of sugar each. It’s still almost the same as one iced doughnut.

All products featured some kind of claim implying they were ‘healthy’, Action on Sugar claimed.

Katharine Jenner, campaign director of Action on Sugar, Queen Mary University of London, said: ‘The message to food manufacturers is quite simple: Stop tricking parents into thinking your products are healthy.’

The government recommends that free sugars should not make up more than 5 per cent of daily calories.

For adults should this is no more than 30g a day, roughly equivalent to seven sugar cubes, and for children aged seven to 10, the limit is 24g, or six sugar cubes.

But to make it confusing for consumers, the current labelling is based on total sugars, which includes, but does not specify, the free sugars in any given product.

It gives an ‘allowance’ of 90g of sugars per person – which is based on an adult’s intake and not a child’s – and does not require a breakdown of ‘free sugars’.

Almost all (91 per cent) of products had no front of pack traffic light label to signal how much fat, sugar and salt they contained in a simplified manner.

However, if they were obliged to, all would be under a red category.

Many people, therefore, may mistakenly buying these processed fruit snacks assuming they contribute less of the ‘unhealthy’ sugars than they actually do, Action on Sugar fears.

For example, Tesco Apple & Sultana Bars claim to be 20 per cent of your daily intake of sugars.

But in fact at 18.4g, they contain nearly five teaspoons of ‘free sugar’ -nearly the recommended daily maximum allowance for a 4-6-year-old in just one bar.

Action on Sugar are today calling for the UK Government to mandate labelling that reflects the latest dietary advice on free sugars, not total sugars.

Ms Jenner said: ‘Manufacturers are hiding behind health halos of messages such as ‘made with real fruit’ and ‘no added sugars’ to obscure the fact that processed fruit-based snacks are as unhealthy as sweets and sugary drinks.

‘Parents are struggling to feed their children healthy food already without manufacturers making the process even more confusing.’

Sheena Bhageerutty, assistant nutritionist at Action on Sugar said: ‘These products line the shelves of the “baby and child” aisle in supermarkets with attractive packaging designed to appeal to new parents.

‘However, the nutritional information is hidden on the back of the packaging making it unclear to tell at a glance if they are a good choice or not. Our research has uncovered the truth that, based on their high sugars content, these fruit snacks would be better placed in the confectionery aisle.’

Dr Saul Konviser from charity, Dental Wellness Trust added: ‘Parents be warned. These so called “healthy” fruit snacks can bind and trap sugars on and around the tooth making children’s teeth more susceptible to tooth decay – especially as they are less likely to floss or brush their teeth – which are also much thinner in density.’

MailOnline contacted all the companies mentioned in this article.

Urban Fruit said: ‘Urban Fruit is a brand targeted at adults who lead busy on-the-go lifestyles. We are positioned in the Adult Dried Fruit category/fixture in all our retailers and our marketing and comms is directed to adults aged 21-55. All of our fruits are gently baked to maintain their natural goodness.’

A Tesco Spokesperson said: ‘The health of our customers is very important to us. Our own-brand apple and sultana bars are produced solely from dried fruit with no additives, preservatives or added sugars.

‘Our packaging is designed to clearly display the sugar content as part of our ongoing work to help our customers take simple steps to leading healthier lives.’