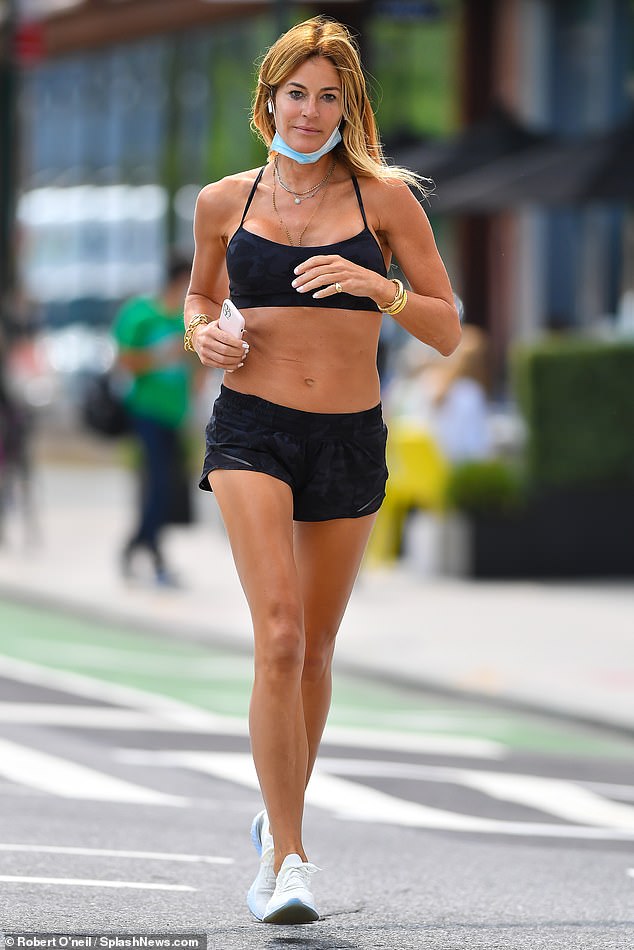 Former Real Housewife Of New York Kelly Bensimon leads an incredibly active lifestyle, making sure to fit in a jog every single day.

So Kelly, 52, was back at it again as she showed off her toned physique while running around in NYC in a black sports bra and little black shorts.

It seems fitness has been a priority for the former reality star, who took to Instagram a few days ago to reveal how her daily health routine includes a 20 minute run followed by 30 squats, 50 sit-ups and 10 lunges.

Routine run: Former RHONY castmate Kelly Bensimon, 52, was seen going out for her daily jog in NYC on Monday

Kelly flashed a wave at the camera as she appeared to be zoning out on her run with her airpods in.

She showed off her tremendously sculpted arms and long legs in her barely there jogging outfit.

Bensimon threw on a pair of crisp white trainers, strapping her blue face mask around her chin and sporting some dark eyeliner that appeared to be running from the sweat.

Runners high: Kelly flashed a smile as her golden locks bounced behind her during the jog 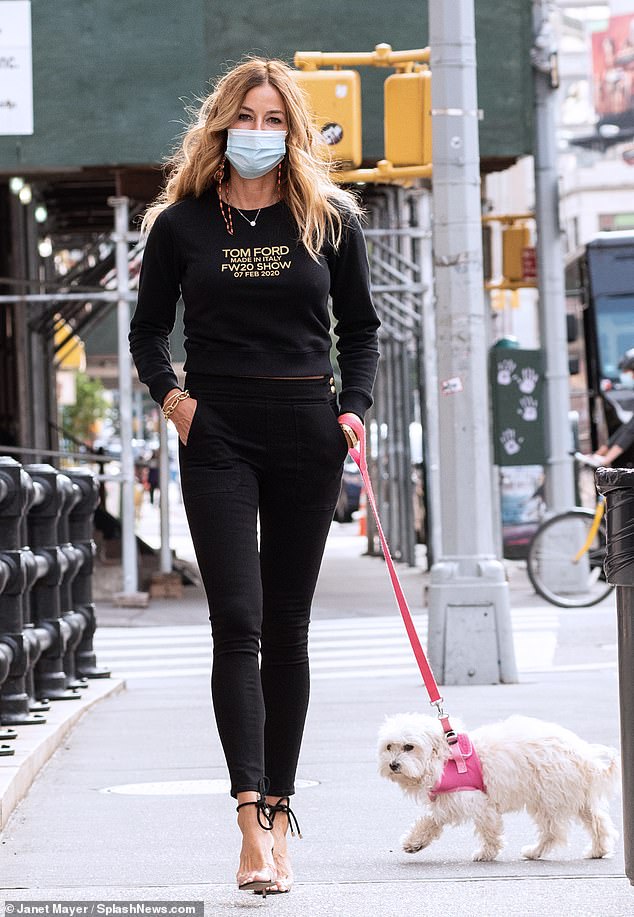 Stroll: After getting her fitness in, the star swapped into another comfy black ensemble to take her dog for a walk

Keeping on her usual set of jewels, Kelly sported an eclectic array of gold necklaces and bracelets as she wore her golden locks down.

After getting her fitness in, the star swapped into another comfy black ensemble to take her dog for a walk.

She teamed a Tom Ford top with well tailored trousers while her pooch was equipped with a pink harness.

Kelly didn’t miss an opportunity for glamour, dressing up her dog walking look with clear heels. 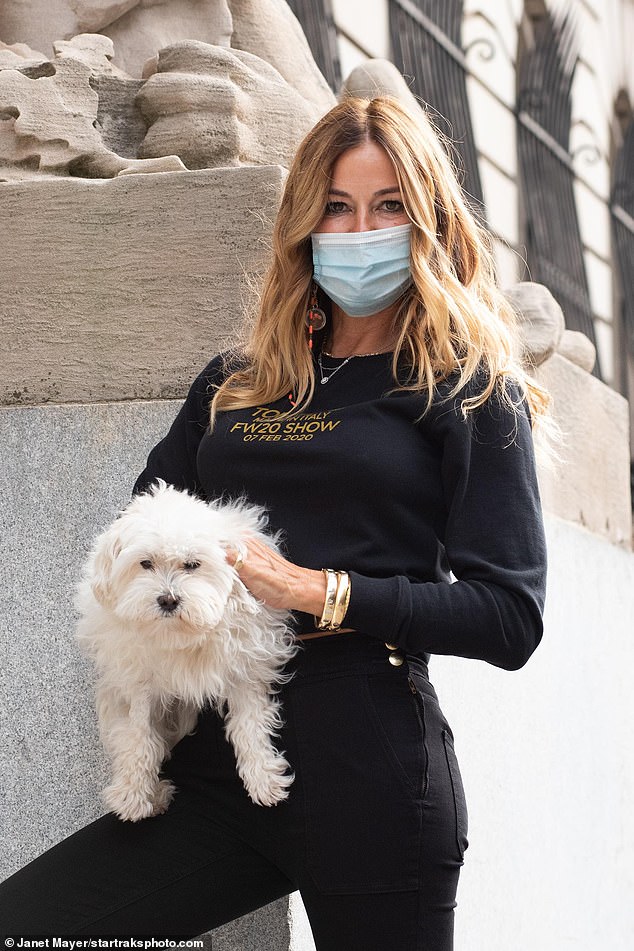 Dog days: She teamed a Tom Ford top with well tailored trousers while her pooch was equipped with a pink harness 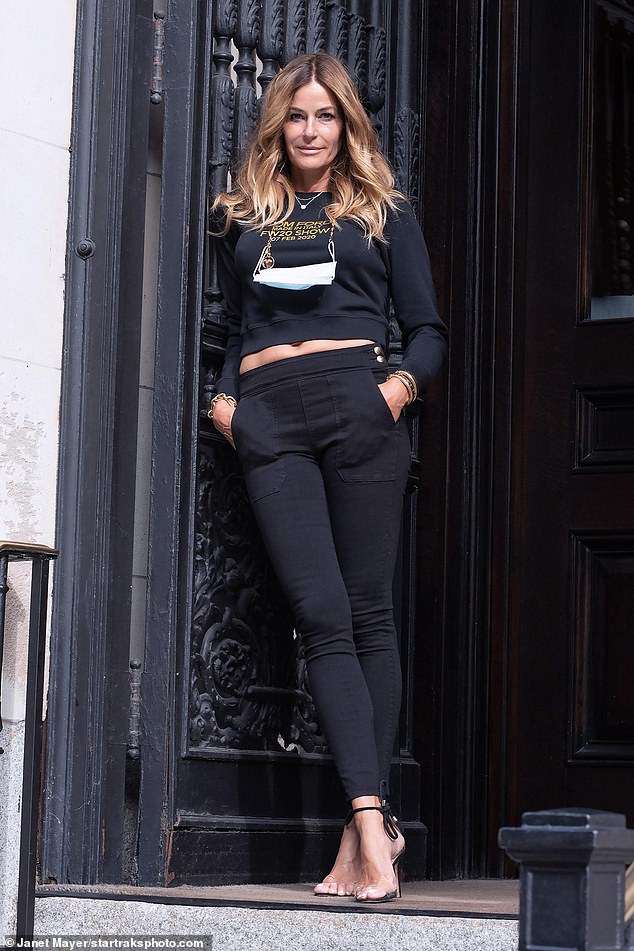 Kicking it up: Kelly didn’t miss an opportunity for glamour, dressing up her dog walking look with clear heels 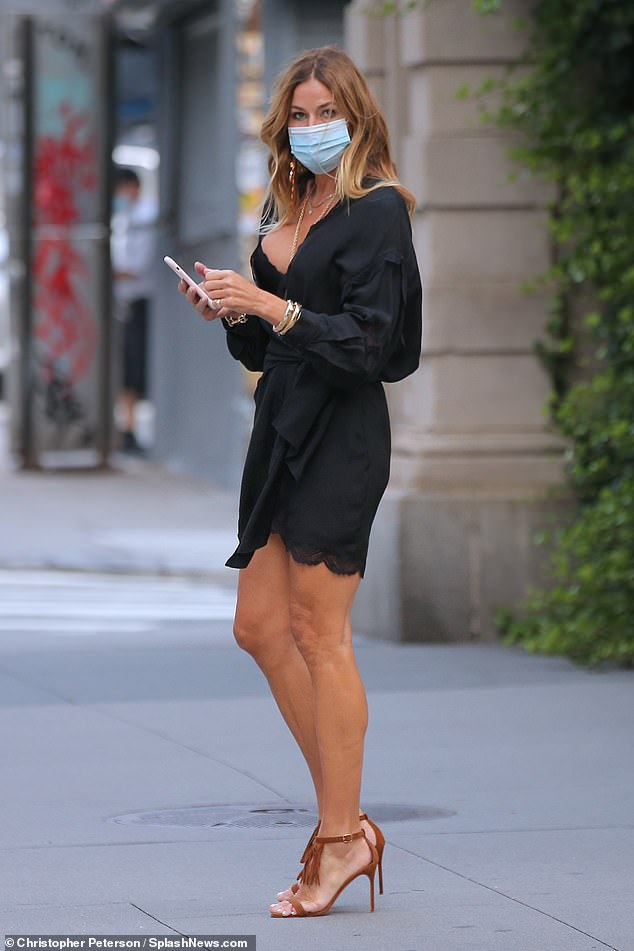 But Bensimon wasn’t done there, stepping out in an ultra chic look in the early evening.

The mother of two daughters Sea, 22 and Thadeus ‘Teddy’, 20, has been splitting time in quarantine between her NYC apartment and The Hamptons, where the former Housewife works for Douglas Elliman doing both residential and commercial real estate.

She shared to Instagram at the end of August that daughter Teddy had safely moved back to college at Trinity in Connecticut amid the pandemic. 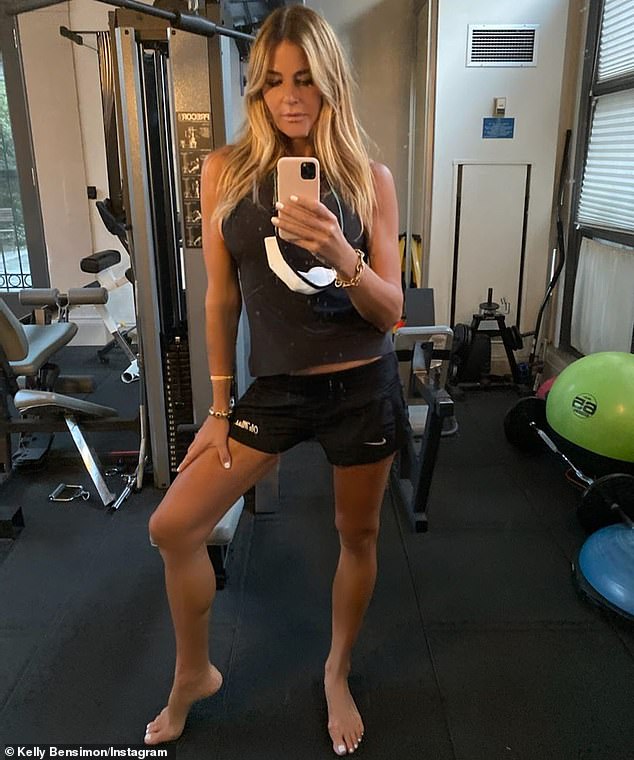 Kelly recently announced that she was also ‘back in the saddle’ when it came to modeling as she still participates in a number of shoots.

In honor of New York Fashion Week, Bensimon took a trip down memory lane as she shared a professional photo of herself and ran through her long list of fashion related achievements.

‘I started modeling at 16, sold my first jewelry line to Barneys New York at 25, I edited Top Model magazine at 26’ she posted. 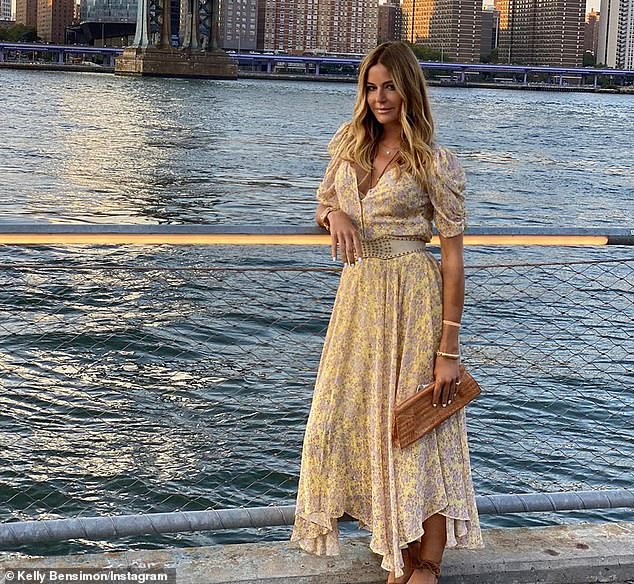 Stunner: Kelly poses in Brooklyn as she captioned that going there was her way of ‘getting outside of her comfort zone’ as she enjoyed sunset drinks in DUMBO;

Kelly continued, ‘I wrote American Style for the Costume Institute at the Metropolitan Museum of Art at 34, created and was the Editor of the magazine ELLE Accessories at 35, hosted NYFW for IMG Models at 36, and created my first outerwear line EnVille with at 50’.

The model who has always been involved in fashion shares her two daughters with world renowned fashion photographer Gilles Bensimon, 76.

The pair were married for 10 years until they split in 2007, two years before Kelly ever appeared on the Bravo hit show.

Since then Kelly has remained largely unattached with the exception of ex-boyfriend Nicholas Stefanov – who is 10 years her junior. 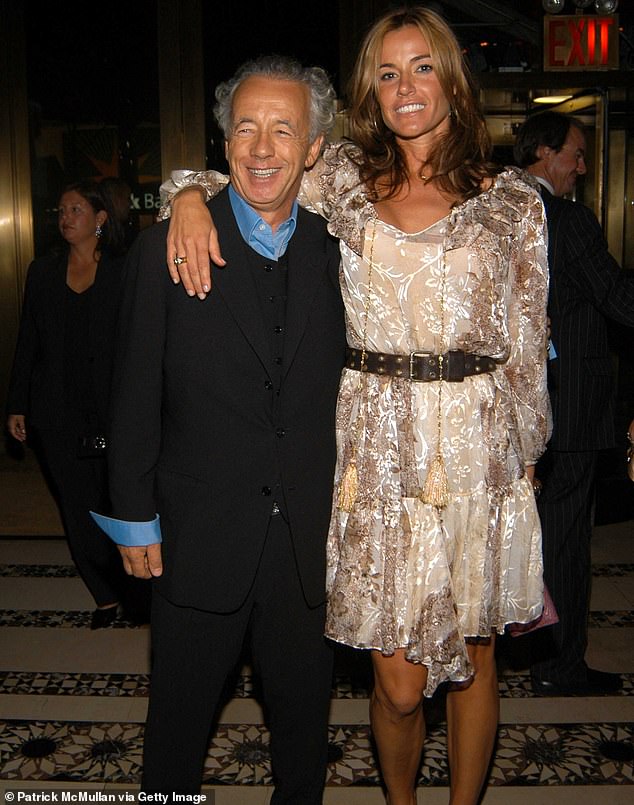 One love: Kelly has only been married once and it was with  fashion photographer Gilles Bensimon who fathered her children; pictured during their marriage at an NYC Gala in 2005 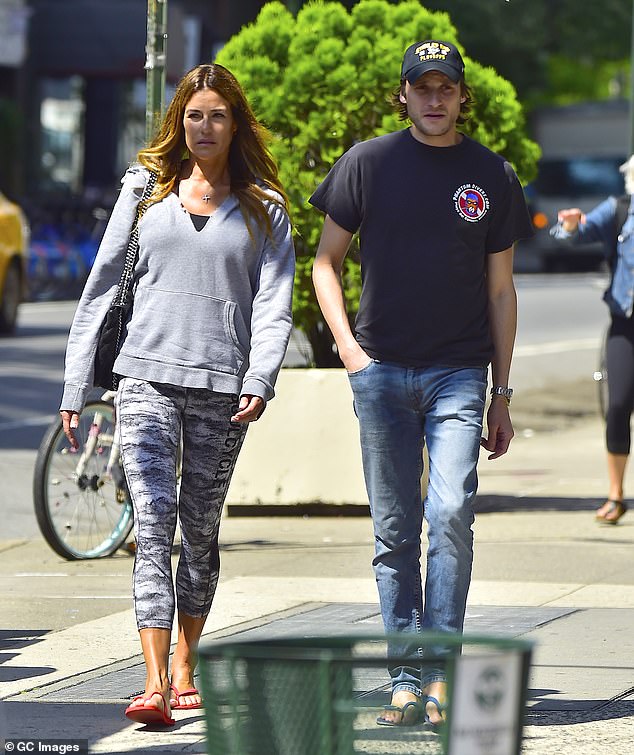 Hot and cold: Kelly was most recently photographed with her on and off boyfriend Nicholas in 2017 as the two strolled around NYC; 2017

The on and off pair had an apartment confrontation in 2009 where it was reported that Kelly hit him in the face which landed her a misdemeanor assault charge though she was never convicted.

The on and off pair were spotted out several times after in NYC as there appeared to be no bad blood.

Last week she donated her time and energy to the Food Bank for NYC on Hunger Action Day. 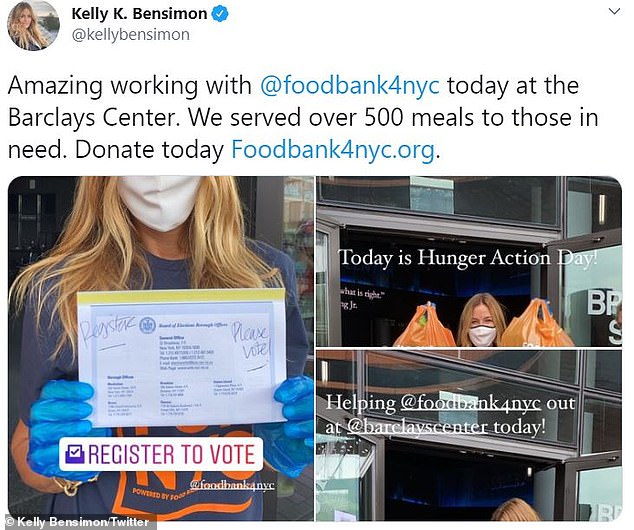 Vote: Kelly was seen giving back on Hunger Action Day while also encouraging her followers on social media to vote as she helped her community